Coyol Free Zone is a medical industry specialized zone in Costa Rica. This 40 Hectare park is responsible for 1% of the country's GDP and is home to dozens of world renowned tenants.
By
Nivida Arias
María Saavedra
Aleksa Burmazovic
,
November 11, 2021

Coyol Free Zone is a medical industry specialized zone in Costa Rica. This 40 Hectare park is responsible for 1% of the country's GDP and is home to dozens of world renowned tenants. 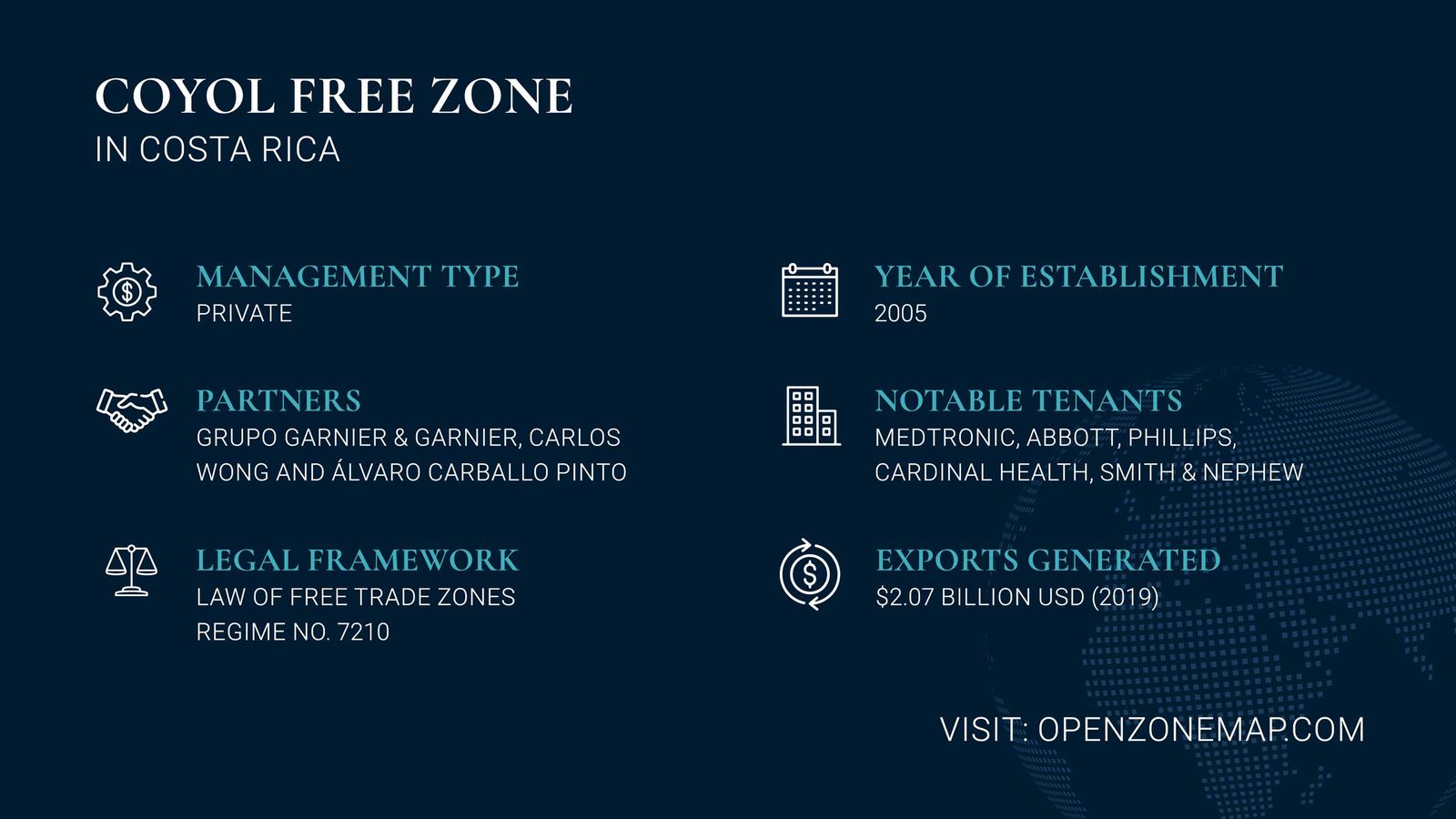 Coyol Free Zone is a Costa Rican industrial hub specialized in medical manufacturing companies. With over 107 hectares of real estate and 400,000 square meters of facilities, it is among the largest free zones in Central America.

It is located in the province of Alajuela, 4.5 miles west of the SJO International Airport. The site offers a full electrical grid, potable water system, access to commercial and industrial structures, common areas, roads, highway, a storm water management system, and optic-fiber connection. [1] 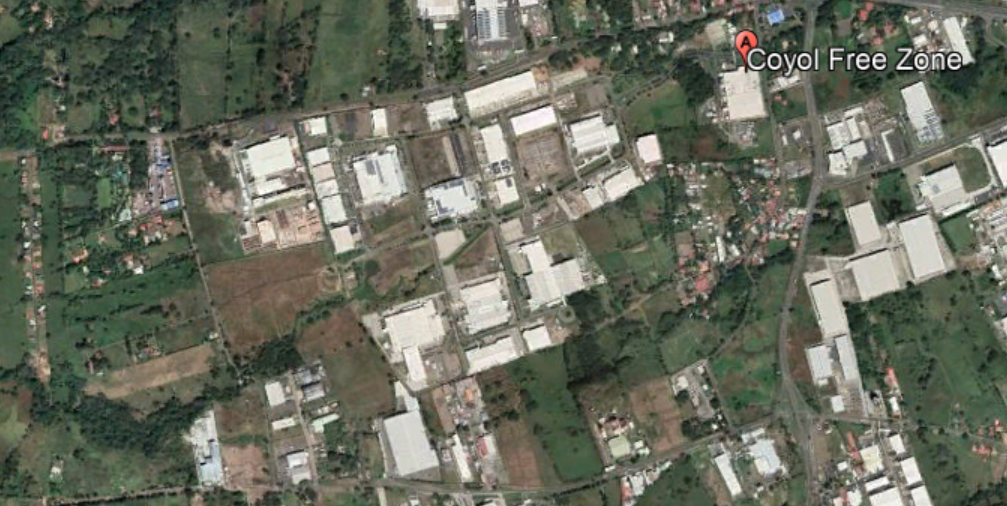 The CFZ was created in 2005, when Grupo Garnier & Garnier and Carlos Wong pitched the idea of managing a free zone project to Álvaro Carballo Pinto. At the time, Pinto was the personal legal representative of the landowner in Coyol de Alajuela, but he would later become the president of CFZ, a position he still holds as of 2021. [1]

The zone started attracting investment in 2007. The first investment came from Hologic Costa Rica, a global medical technology company. The firm manufactures medical devices for women’s health and wellness. The firm was already in Costa Rica and expanded to CFZ in 2007. Hologic became interested in the zone because of the physical space available, geographic location and the low risk of natural disasters. [3]

In 2008, the next investment came from Moog Medical with a $3.5 million USD investment [6]. Sensient, Establishment Labs, and UTITEC followed afterwards. [7]

The Coyol Zone was quickly becoming favored by medical technology companies: In 2009, St. Jude Medical invested $40 million USD in the zone [5]. By the end of 2009, CFZ had received $100 million USD in investments. [8] 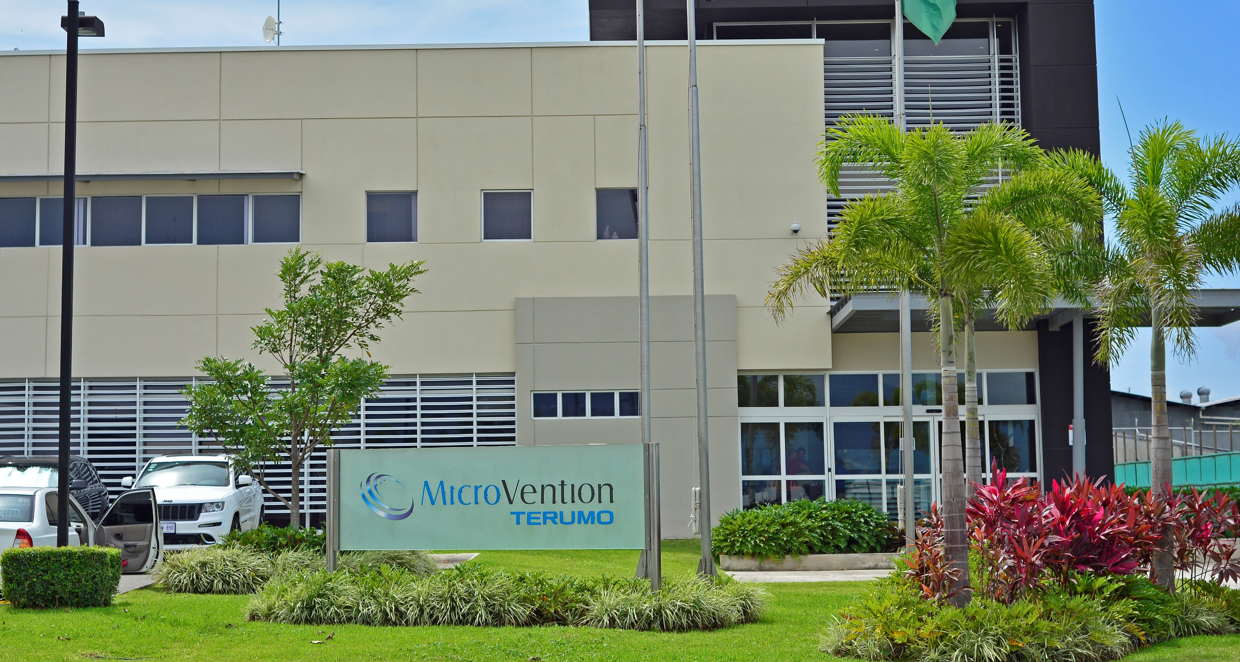 MicroVention is one of the many medical technology companies in the Coyol Zone. Image source.

The main activities at CFZ are manufacturing medical software, equipment, and technologies. Suppliers and providers in the zone also offer services such as packaging, molding, extrusion, assembly, sterilization, and logistics. [4]

Infrastructure of the zone

According to the Law of Free Trade Zones Regime (Ley de Régimen Zonas Francas) Nº 7210 which came into force on Nov 23rd, 1990 [11], benefits consist mainly of exemption from taxes on importation and exportation, local purchases, real estate transactions, patenting, and profits. These benefits are granted according to the location and category of the company. [10] [14]

CFZ has original equipment manufacturers that streamline exportation logistics for manufacturing companies, and provides security services, common area maintenance, and property maintenance. The zone has partnered with educational institutions, which allows for access to competent and qualified human talent and local training programs. [12]

The zone has an evident environmental focus. Some of the measures taken include reusing water, solar paneling, and Leadership in Energy and Environmental Design certified buildings by the US Green Building Council. [13] 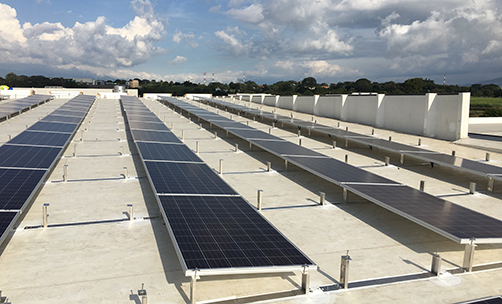 The companies in the park have implemented insulation thermal systems in ceilings and walls which is also reflected in lower energy consumption. To reduce their water consumption, many companies in the park reuse their industrial waters (air conditioners). In construction, the processes are done using recycled construction materials and work is carried out following an adequate materials disposition. There has also been a tree planting project and the development of eco-efficient gardens for the park. [15] 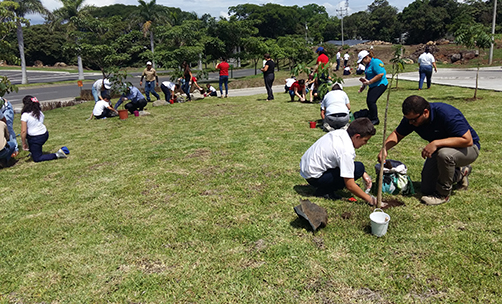 The Coyol zone relies on a large network of partners both inside the country and internationally. [12]

CFZ’s most well known tenants include:

CFZ’s academic alliances allow for academic and work opportunities for the student body of the allied institutions, while preparing human talent for the country. Their key partners are: 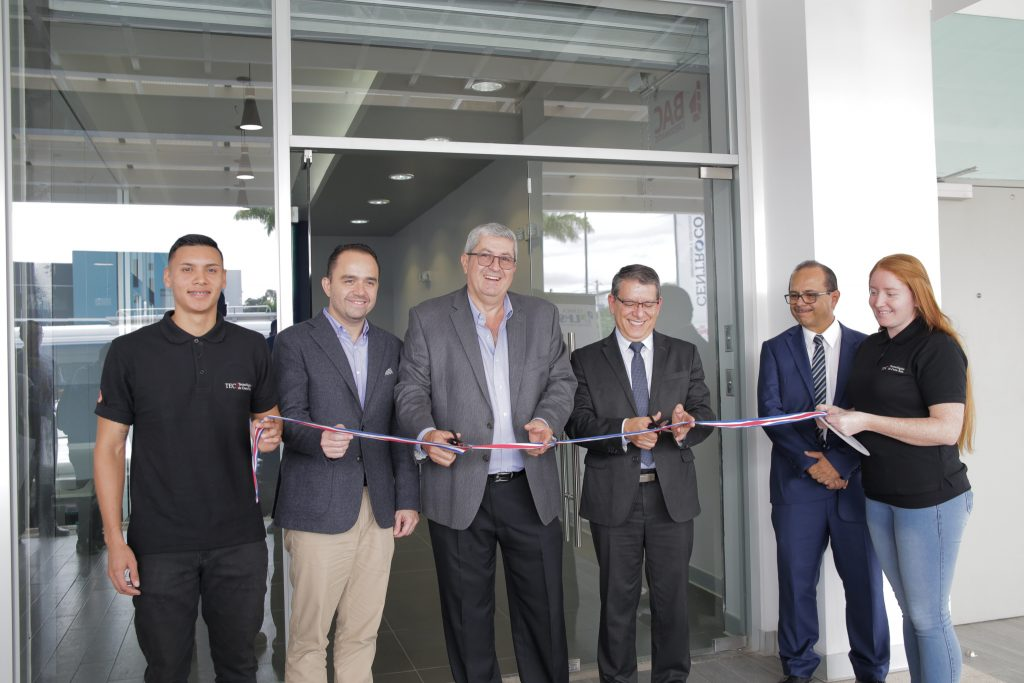 The TEC training center in the Coyol Zone was opened in October 2018. Image source: El Mundo

CFZ works in collaboration with local governments to ensure the best performance and operation of the zone. Local Governments:

The zone was mentioned in an infrastructure dispute in August 2020. Independent congressman Dragos Dolanescu noted a discrepancy in an agreement signed between Grupo Nación and the Costa Rican Institute of Railways (INCOFER) in 2019. The construction of lines 4 and 5 from Alajuela to Ciruelas and from Ciruelas to El Coyol were the main concern of the congressman, as well as the creation of train stations in Parque Viva near the Coyol and Parque Viva projects. [16]

This part of the rail development plan would drive development to the zones, but would come at a price - the project would cost $265 million USD more than previously planned, which would require a loan from the Central American Economic Integration Bank. Congressman Dolanescu saw this as a way for a few well-connected businesses to benefit greatly at public cost, and demanded transparency. In June 2020, he reported this concern to the national comptroller's office, addressed to Marta Acosta in official letter DFOE-IFR-0393. [17] 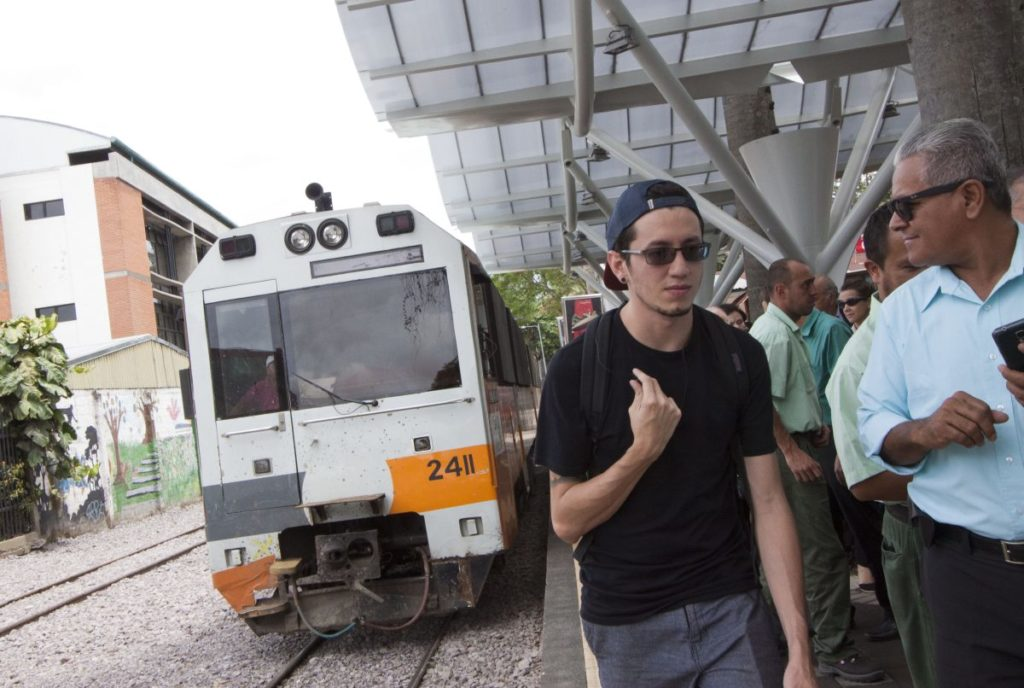 The Coyol zone was involved in a budget concern regarding the electric mass-transit system in Costa Rica. Image source: Semanario Universidad

The comptroller urged the legislature for transparency and a re-examination of the need for taking out a loan from the Integration Bank. [17]

Coyol Free Zone primarily focuses on companies in the Life Sciences and Advanced Manufacturing industries. It ranked #7 in the Top 10 Free Zones from Latin America ranked by Site Selection magazine. CFZ has been noted for being a sustainable, collaborative business hub for life sciences. Their specialization in medical devices, recruitment assistance, and large tenants gained significant press.

During recent years, the Life Sciences industry has become a strategic area for Costa Rica, now representing a significant portion of the country’s economy. Medical Devices have become the most important manufacturing export sector of Costa Rica, and Coyol Free Zone produces 63% of them, with exports of $3.8 billion USD in 2020 and 38,000 direct jobs [16]. 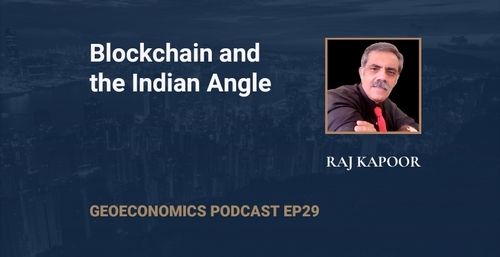 In this Geoeconomics Podcast episode, Kovid Bhaduri talks with Raj Kapoor, the founder and CEO of the India Blockchain Alliance. The discussion goes over emerging trends in blockchain in the governance, start-up, and education space, and covers the present and future of blockchain in India. 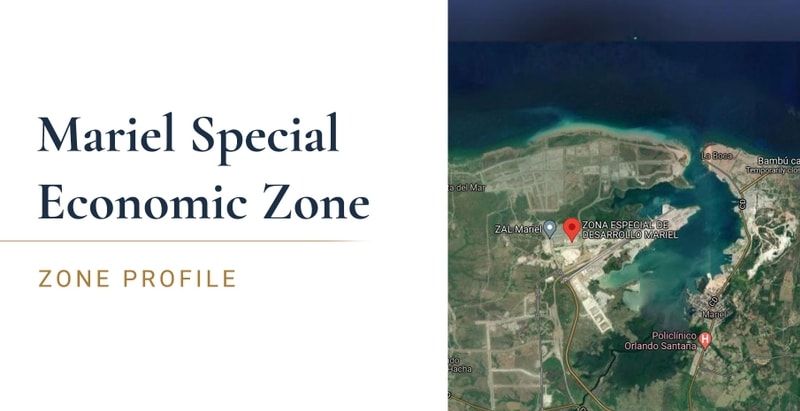 "In 2013 the Mariel Zone was approved in Cuba, making it Cuba's first, and only, SEZ. Since, it has grown to be a regional leader of technological innovation."