With Florida vaccination rollout stepping up, when might COVID-19 threat start to decline?

MIAMI, Fla. – The age of 65 has been a key number in the COVID-19 vaccination race in Florida since doses arrived in the state. That is, until now.
Gov. Ron DeSantis said during a press conference that, as of Monday, people ages 60 and older are eligible for vaccinations.
"We’re going to do 60-plus. As we see the demand, maybe we can even lower that age even more. We’d like to make that announcement next week," DeSantis said.
As of Friday, Publix pharmacies across the state had already opened its vaccine scheduling portal to the expanded 60 and older group. To book an appointment or for more information visit publix.com/covidvaccine.
Ad
So just how many people have been vaccinated? Out of a statewide population of almost 22 million, nearly 3.9 million have received at least their first shot.
In Miami-Dade County, the number of first dose recipients is at more than 450,000. And in Broward County, just over 340,000 people have received their first dose. 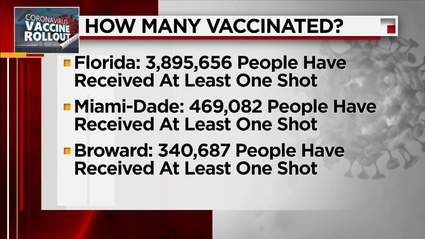 As of March 12, 2021, how many Floridians have been vaccinated? (WPLG)
However, until there is a bigger percentage of the population vaccinated, medical experts advise everyone to continue with the new normal and emphasize that case mitigation strategies are important.
Miami Dade County’s Chief Public Safety Officer J.D. Patterson spoke Friday during a commission meeting about the need to keep the county’s curfew in place.
"If we remove these controls, that community spread is a serious threat to our hospitals, and our public safety infrastructure just might be overrun," Patterson said.
Jackson Health System’s President and CEO Carlos Migoya gave a glimpse of when he believes the vaccine rollout could start to curb the threat of community spread
Ad
"By the end of June, we would have done 50 percent of the population in Miami-Dade County. That is the magic number that we need to get through to see a major impact on this," Migoya said.
Also, the state is expanding access to homebound seniors not in public housing.
Homebound seniors can send an email to the state to request a COVID-19 vaccine.
The email address is [email protected] to make a request.
DeSantis announced that new option Thursday, saying the state has vaccinated over 1,500 homebound seniors to date.
Copyright 2021 by WPLG Local10.com - All rights reserved.

Christina returned to Local 10 in 2019 as a reporter after covering Hurricane Dorian for the station. She is an Edward R. Murrow Award-winning journalist and previously earned an Emmy Award while at WPLG for her investigative consumer protection segment "Call Christina."
email