For Notion, a downturn is time to play offense

Being cash flow-positive means never having to say you’re sorry. 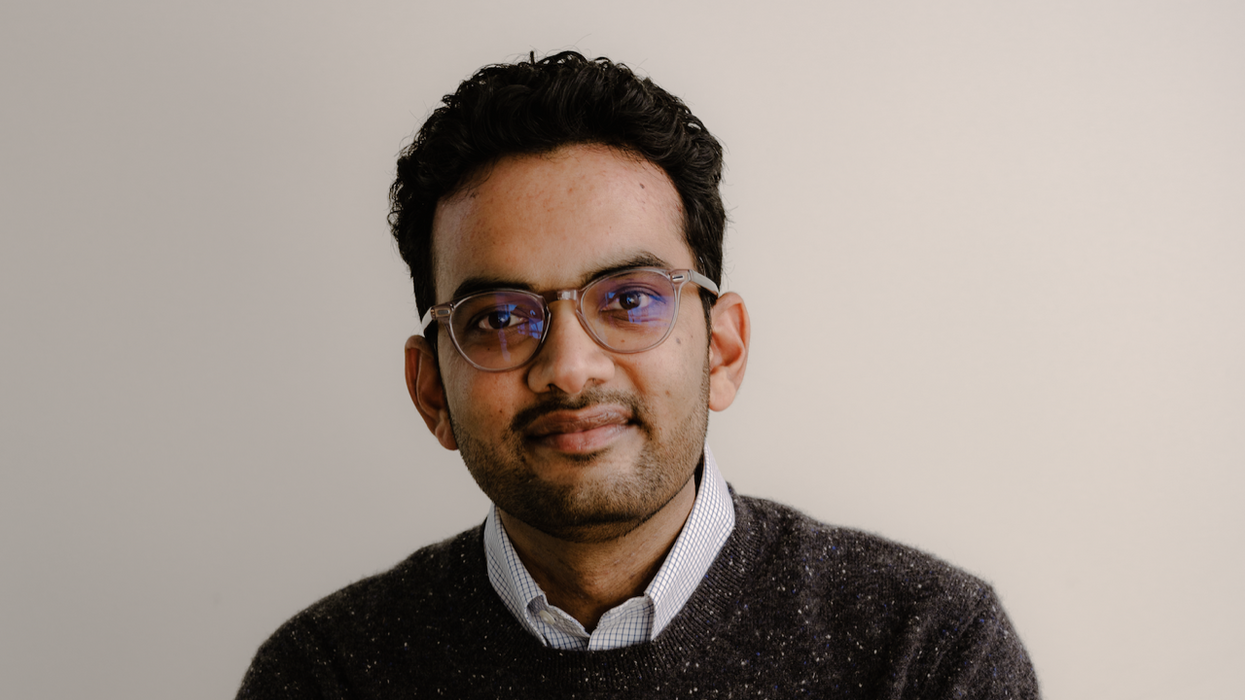 "Every day you’re seeing news about layoffs, and so we want to be compassionate about that happening in the ecosystem, but also be grateful that Notion is a company that continues to do well," said Notion COO Akshay Kothari. | Photo: Notion

Venture capitalists have all been giving the same downturn-survival advice to startups: Cut costs, do layoffs, develop more discipline and get to cash flow-positive.

"We find ourselves in an interesting spot because we’ve always been cash flow-positive, and we don’t need to do those things," said Notion COO Akshay Kothari. "So we’ve been thinking the last six months a lot about ‘Well, if everybody is zigging, how do we zag?’"

Instead of pulling back on investing like many of its peers, the productivity startup has gone on the offense. It acquired calendar app Cron in June and brought on the Flowdash team earlier this month. Notion also leaned into more marketing by launching a global ad campaign — the kind of spending VCs are cautioning against.

The larger macro slowdown hasn’t affected investor interest either, Kothari said. The company had raised $275 million last fall at a $10.3 billion post-money valuation. Instead of raising more cash or an extension round like many startups this summer, Notion recently completed an internal tender in which where Sequoia and Index bought former and current employee shares at the same price as its last funding round. That didn’t mean any more cash for the company, but it was a valuable morale booster at a time when companies like Stripe and Instacart have been slashing the valuation of employee shares.

"That was a great signal for both the employees and our future recruits that our valuation is still very strong, and top-tier investors like Sequoia and Index are interested in buying more," Kothari said.

Being aggressive in a larger downturn is a position not every startup finds itself in right now. Companies have been instituting hiring freezes and slashing head count, from TikTok to Unity to Substack. Klarna saw its valuation fall from $45.6 billion last June to $6.7 billion this July in its latest funding round.

Notion isn’t immune to the headwinds either. A lot of its customers are startups, so any downturn that causes them to cut costs could mean tools like Notion might be on the chopping block. Kothari says the company is watching its small-business churn closely right now because of it, but it’s also seeing its mid-level enterprise numbers rise. After reading about Marc Benioff’s regrets for not investing more in 2009 when Salesforce found itself performing better than expected during that financial crisis, Kothari said he realized Notion’s move in this environment was to watch its own numbers closely, but to play offense while it can to gain ground.

For Notion, that means launching a global ad campaign at a time when companies are cutting back on marketing spend and targeting a consumer market to get people to use its products not just for work but also to manage their daily lives. 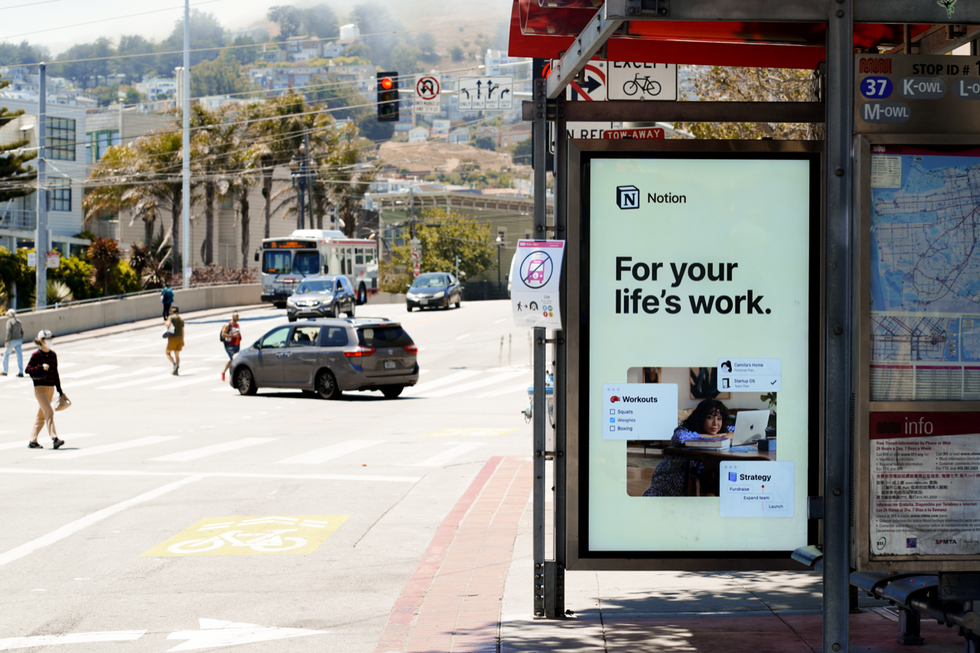 Notion launched a global ad campaign at a time startups are being told to cut marketing spend. | Photo: Notion

It’s also become much more active in M&A with its recent acquisition of Cron and the addition of the Flowdash team in the last two months. It’s not the only company finding such opportunities. Companies like cryptocurrency exchange FTX have seen this time as a prime buying moment, and FTX’s founder Sam Bankman-Fried has invested in many companies in the distressed crypto space. (He’s also taken a similar playbook to Notion and covered downtown San Francisco with ads featuring his headshot.)

Notion hasn’t been on the same scale of M&A spree, but Kothari has noted a definite shift in entrepreneurs' attitudes toward deals. As funding has dried up and there are fewer paths to an exit, he’s found more founders are willing to become part of bigger companies — and Notion’s open to more conversations.

"I would say we're very much in the market to continue to talk to companies both on the product side as well as on the acquihire side and see how we can accelerate our road map internally," Kothari said.

The tender offer is another move, but not one every company can make. Allowing employees to sell shares before an IPO used to be more taboo in the startup world, but attitudes have shifted over time. When sales are executives-only, like in the case of DataRobot, it can be seen as a red flag. Some companies planned to do one, but have also backtracked citing larger market conditions. Ecommerce startup Fabric announced to its employees in May that it was going to do a tender offer, but canceled it 10 days later, Insider reported.

Notion found that its June tender offer, in which current and former employees sold shares to Sequoia and Index, helped employees by showing that the value of their shares wasn’t just on paper.

"It gives employees the ability to not worry about the student debt that they had when they joined the company or maybe the mortgage they have," Kothari said. "It’s not something that people feel like they can just go retire, but I think it gives them a peace of mind."

Well, at least for now, Kothari said. He and Notion CEO Ivan Zhao have talked a lot about how they’re grateful to be in a cash flow-positive position to start and not reworking their business to get there like many. Now the challenge is to remain in growth mode and stay there, despite the market. Kothari knows not to take it for granted.

"Every day you’re seeing news about layoffs, and so we want to be compassionate about that happening in the ecosystem, but also be grateful that Notion is a company that continues to do well," Kothari said. "It may not be forever — it needs us to all be intensely focused on the market and continue to do well, because that's the only way these things can continue to happen in the future."

Biz Carson ( @bizcarson) is a San Francisco-based reporter at Protocol, covering Silicon Valley with a focus on startups and venture capital. Previously, she reported for Forbes and was co-editor of Forbes Next Billion-Dollar Startups list. Before that, she worked for Business Insider, Gigaom, and Wired and started her career as a newspaper designer for Gannett.

A game that lets you battle Arya Stark and LeBron James? OK!

Don’t know what to do this weekend? We’ve got you covered.

This week we’re jumping into an overnight, free-to-play brawler; one of the best Japanese dubs we’ve heard in a while; and a look inside a fringe subculture of anarchists.

Nick Statt is Protocol's video game reporter. Prior to joining Protocol, he was news editor at The Verge covering the gaming industry, mobile apps and antitrust out of San Francisco, in addition to managing coverage of Silicon Valley tech giants and startups. He now resides in Rochester, New York, home of the garbage plate and, completely coincidentally, the World Video Game Hall of Fame. He can be reached at [email protected]

When Hurricane Ida swept through New York City last August, the storm damaged multiple boilers at Woodside Houses in Queens. Repairs were slow, and residents were forced to live with heat outages well into the winter; some even relied on their apartments’ gas stoves to keep warm.

That was hardly the only time residents in New York’s vast public housing system were subjected to too-cold or too-hot homes. For them, it’s a near-daily facet of life.

Lisa Martine Jenkins is a senior reporter at Protocol covering climate. Lisa previously wrote for Morning Consult, Chemical Watch and the Associated Press. Lisa is currently based in Brooklyn, and is originally from the Bay Area. Find her on Twitter ( @l_m_j_) or reach out via email ([email protected]).

The industry’s criticism of "regulation by enforcement" has a long history — and hides some complicated realities.

If you're following the debate about how crypto should be governed, you've heard the phrase "regulation by enforcement."

The latest flashpoint comes in the form of the Securities and Exchange Commission's civil lawsuit alleging insider trading by a Coinbase employee. The SEC’s explosive assertion that nine of the 25 cryptocurrencies involved in the alleged insider scheme are securities could have significant consequences for the industry. Placing that claim within the lawsuit has prompted Coinbase, a high-ranking U.S. senator and even fellow federal regulators to bemoan that the SEC is regulating by enforcement.

When your revenue falters, don’t blame the worker

Tech leaders want to boost employee productivity. Here’s how to have that conversation without alienating workers.

The idea that underperforming individuals are solely responsible for their companies’ large-scale financial troubles is probably inaccurate.

It’s easy to overlook declining productivity when a company is doing well. But with the looming threat of recession, some big tech leaders are suddenly getting tough on workers. At Meta, Mark Zuckerberg wants to "turn the heat up" because apparently there are some Metamates who shouldn’t be there. The situation is similar at Google, where Sundar Pichai said employees need to work with "greater urgency, sharper focus, and more hunger than we’ve shown on sunnier days."

The "we need to boost productivity" discussion is a better alternative to layoffs or hiring freezes, but that conversation needs to be handled delicately. Vaguely gesturing to the need to buckle down can be at best unhelpful and at worst stressful to the point of losing all focus.

Lizzy Lawrence ( @LizzyLaw_) is a reporter at Protocol, covering tools and productivity in the workplace. She's a recent graduate of the University of Michigan, where she studied sociology and international studies. She served as editor in chief of The Michigan Daily, her school's independent newspaper. She's based in D.C., and can be reached at [email protected]

1. Prepping for quantum computing could create security issues of its own

2. What are the most popular productivity apps around the world?

5. The Chips Act has a carbon dioxide removal Easter egg

Block shares fall despite earnings beat due to economic worries