When Will The FDA Approve Paxlovid? 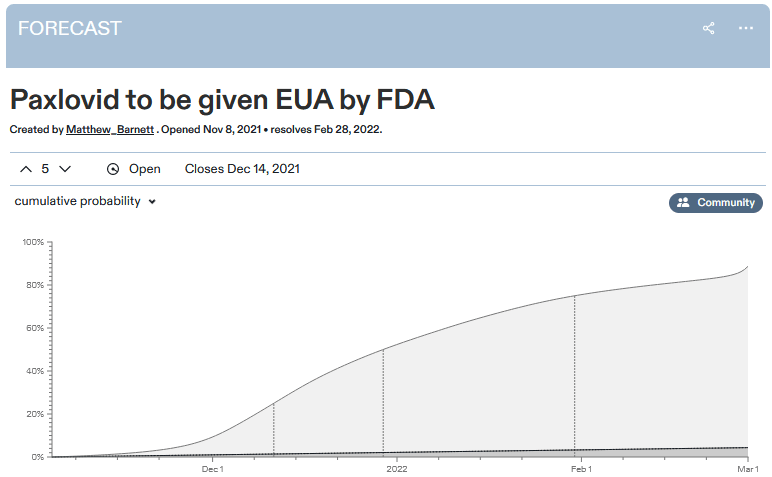 Metaculus predicts January 1 as the median date for the FDA approving Paxlovid. They estimate a 92% chance it will get approved by March.

For context: a recent study by Pfizer, the pharma company backing the drug, found Paxlovid decreased hospitalizations and deaths from COVID by a factor of ten, with no detectable side effects. It was so good that Pfizer, "in consultation with" the FDA, stopped the trial early because it would be unethical to continue denying Paxlovid to the control group. And on November 16, Pfizer officially submitted an approval request to the FDA, which the FDA is still considering.

As many people including Zvi, Alex, and Kelsey have noted, it’s pretty weird that the FDA agrees Paxlovid is so great that it’s unethical to study it further because it would be unconscionable to design a study with a no-Paxlovid control group - but also, the FDA has not approved Paxlovid, it remains illegal, and nobody is allowed to use it.

One would hope this is because the FDA plans to approve Paxlovid immediately. But the prediction market expects it to take six weeks - during which time we expect about 50,000 more Americans to die of COVID.

Perhaps that 10% chance of it not getting approved is very important, because that’s a world in which it’s discovered to have terrible side effects? But discovered how? There was one trial, it found no side effects at all, and Pfizer stopped it early. And it’s hard to imagine what rare side effect could turn up in poring over the trial data again and again that’s serious enough to mean we should reject a drug with a 90% COVID cure rate.

Perhaps it doesn’t have any sufficiently serious side effects, but that 10% chance is important because it might not work? Come on, just legalize the drug! If it doesn’t work, then you can report that it didn’t work in January or March or whenever you figure it out, and un-approve it. Nobody will have been hurt except your pride, and in the 90% of cases where it does work, you’d be saving thousands of lives.

Let’s give the FDA its due: this time they’re probably only going to wait a few weeks or months. Much better than their usual MO, when they can delay drugs for months arguing about the wording of the warning label. I honestly believe they’re operating on Fast Mode, well aware that the entire country is watching them and yelling at them to move faster.

PS: Kudos to the Biden administration, which has already ordered 10 million courses of Paxlovid, effective immediately, to be distributed as soon as the FDA gives them permission. This is great. But all their initiative will go to waste unless the FDA can do its part quickly too.

PPS: I know I’m going to get asked: how is this different from the ivermectin situation?

Last week I wrote a long post arguing that most of the early super-promising trials of ivermectin were garbage, and that despite the hype it probably doesn’t work against COVID. Shouldn’t I be equally skeptical of Paxlovid now that it’s having its own super-promising early trials?

No. For one thing, this isn’t amateur hour anymore. The ivermectin trials were random people who bungled their experiments or just plain made them up. They had sample sizes of (going through the first few on my notes) 25, 116, and 66 people. The Paxlovid trial was run by the best scientists Pfizer’s money can buy, and had a sample size of 1,219 (it would have been 3,000 if they hadn’t stopped it early).

Like everyone else, I hate the fact that pharmaceutical companies are the only people with enough resources to run high-quality studies, and that this controls what drugs we end up using. But while we’re working on that problem, pharmaceutical companies do have a lot of resources, and their studies are pretty good, and we don’t have to grade them by the same standards we use for amateur hour, especially when their studies are 20x bigger. Just because this shouldn’t be true doesn’t mean that we have to pretend it isn’t, especially when that pretense could kill thousands of people unnecessarily.

(big pharma companies do often try to sneak mediocre drugs past the FDA, but that doesn’t look like falsely claiming 90% mortality reductions. It looks like aducamumab: a drug whose early trials showed mediocre results on secondary endpoints, but which Biogen somehow got the FDA to approve anyway)

I know I’m not going to convince many ivermectin supporters. So consider this: ivermectin is FDA approved. It’s approved against parasitic worms, but that’s fine: once a drug is approved for anything, any doctor can (more or less) use it for whatever they want. Doctors can absolutely prescribe ivermectin right now if they want, and many of them (like Pierre Kory) have. The ones who don’t prescribe it are avoiding it because they think it doesn’t work, not because the FDA is trying to prevent them. Heck, people can get ivermectin even without a prescription as long as they use the veterinary version.

The medical regulatory system has made prescribing ivermectin legal and easy. All I’m ask is that they do the same for a drug which almost certainly works - before thousands more people die unnecessarily.

PPPS: I know that by posting this, I’m tempting fate to have something go horribly wrong with Paxlovid - maybe it causes cancer - and then I’ll look like an idiot for demanding it be rushed through. I accept this risk. I think the benefits of rushing it through are higher than the risks, even though the risks are nonzero. If it turns out Paxlovid is terrible, yeah, I’ll look like an idiot - but I care about maximizing expected lives saved more than I care about my reputation. Can the FDA say the same?

One word I don't see mentioned anywhere is "manufacturing." It's one thing to make enough drug for a clinical trial, it's another to make millions of commercial doses reliably. FDA approval requires inspection of and confidence in these commercial-scale manufacturing processes.

This sounds like a plausible explanation for what’s going on. I would still like to see someone’s calculation as to whether the risk of manufacturing defects is really worth the wait, but at least it’s not insane.]