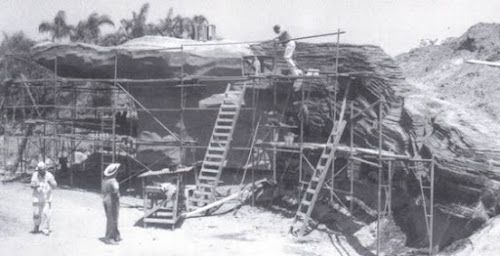 The Man Who Made Artificial Rocks

There were few rocks or boulders found on the land Walt Disney bought for Disneyland. 12,000 orange trees, more or less, but few rocks larger than a stone. It's not that hard, I imagine, to simulate stone with cement plaster--commonly called "stucco."

For the Jungle Cruise, Schweitzer Falls was carefully sculpted to resemble a rock outcropping. What seems to be a solid stone ledge is actually a veneer on structural steel and reinforced concrete (necessary to hold the weight of the water). Looking at 1955 photos of Disneyland, there are very few rocks on display.

The stagecoach in Frontierland toured an area with only a few garden-sized rocks. Which is funny, because the driver would reportedly point out Coyote Rock, Elephant Rock, and Inscription Rock on every trip.
2
Feb
24

Here is a brief list of the Magic Kingdom's original sponsors.

There were 48 lessees in 1955. Some, like the American Dairy Association, were involved with the Disneyland television show—and tied in with print ads and promotions—but did not have an exhibit at the park until the following year.
Feb
17

Let's go to Walt Disney's new Magic Kingdom as seen on TV. It's just a dollar to get in and see all the free exhibits: the Upjohn, Yale & Towne, Kodak, Bank of America and Timex museums on Main Street, the Richfield Oil show, The World Beneath Us, and the Monsanto Hall of Chemistry in Tomorrowland. Also free: the Golden Horseshoe Revue, Hobbyland model airplane demonstrations, authentic war dances at the Indian Village, parades and band concerts.
Oct
10

Walt Disney gave away the food and beverage franchise for Disneyland's first ten years in order to woo investor United Paramount Theaters, owners of ABC-TV. That meant that theater men, purveyors of popcorn and over-priced candy and soft drinks, could set up "grab stands" all over the Magic Kingdom.
1
Jan
3

Walt Disney surveyed the Rivers of America one Sunday in the fall of 1957. The Mark Twain was just leaving the dock, two Mike Fink keelboats were negotiating around each other, two Tom Sawyer Island rafts were crossing in front of the gleaming white riverboat, and three Indian War Canoes were being paddled ahead of the big boat.

"Look at that," Walt said to his 25-year-old Frontierland manager, Dick Nunis, on the patio of the Chicken Plantation restaurant.
1
Apr
5

What is Timex doing on Main Street?

The Timex brand was only a decade old in 1955, and most had only heard of it through television advertising. Everyone in America knew that the Timex watch, whether the ladies bracelet watch, the Swing-a-ling, or a men's model, such as the Marlin, or the Ben Hogan, would "take a lickin' and keep on tickin'." It was so durable because it was a modern, post-war design. The "V-conic" movement was shock resistant due to its armalloy bearings, for example.
2
Mar
23

The frantic construction of the park (the buildings and pathways were built in only eight or nine months), followed by the ambitious additions for the 1956 summer meant that Disneyland was, at last, complete. At least, that was how Roy Disney, the Bank of America, and United Paramount Theaters (owners of ABC-TV) felt.

Walt Disney, apparently, was tired of arguing with them.
Mar
16

Art Director Bill Martin's first ideas for the home of Disney fairy tales were European. Like a Hollywood studio's backlot, he imagined Black Forest sets for the Brothers Grimm story of Snow White, an Italian villagio for the workshop where Gepetto created Pinocchio, and a bit of Olde Londontown for Peter Pan and Alice in Wonderland.

Walt and influential artists like Herb Ryman felt that the area should include a fairy tale castle.
Mar
10

When Circarama opened with the rest of Disneyland on July 18, 1955, the show was the hastily-prepared film A Tour of the West. Essentially, it was a brief demonstration of the 360-degree film-in-the-round technology. The film crew never made it east of Monument Valley or north of Las Vegas—it wasn't really a tour of the entire west.

The Disney creative team behind the project felt that they could do better, given more time and a bigger budget.
1
Mar
2