One of the ironies of the hedge fund world is that analysts tend to do their best work while unemployed. When you're at a fund, you generally get a steady flow of high-level theses, interesting questions, news-and-rumor catalysts etc. that will keep you fairly busy. But spend a quarter or so out of the loop, and you have to come up with big-picture theses yourself, which you can narrow down to specific stock picks. (That's especially important because, as this infamous exchange shows, having fresh ideas is the currency of hedge fund job interviews.)

So, in 2014, a few months after leaving one hedge fund, I was working on a few trade theses, and one of these was that the business of selling hosting for standalone something-dot-com type sites was in terminal decline. Google had just launched domain registration services, and category-based sites like TripAdvisor, Yelp, ZocDoc, and Angie's List seemed like they'd do a better job for the typical small business than a standalone site would.

It's always fun, or at least healthy, to revisit mistakes, and now is a good time to do that. SquareSpace has filed to go public, last valued at $10 billion a month ago.

SquareSpace's upcoming direct listing is definitive proof that selling people standalone websites is a good business, at least for some companies, and it's interesting to look into why. The company was founded in 2003, by someone who, like Shopify's Tobias Lütke, wanted to do something simple online and realized he'd built tools to do it that other people could use. In the case of SquareSpace's founder, Anthony Casalena, he'd wanted to build a blog while in college, and a few years later he was running a one-person company with a million-dollar run-rate. He's gotten a bit better at delegation since then—despite being the CEO of a company with over a thousand employees and a run-rate above $700m, Casalena evangelizes Inbox Zero.

There are several reasons to be suspicious of the website-building and website-hosting businesses:

Fortunately, there are some offsetting advantages. For one thing, the SMB market is so large as to be effectively unlimited. There are 800m or so small businesses worldwide, many of them very small indeed, and as of year-end 2020 SquareSpace had only gotten subscriptions from 3.7m of them. And there are scale advantages, too; at SquareSpace's size, the layouts and designs they offer set a minimum baseline for what a small business site should look like. Small business software companies also benefit, indirectly, from the existence of other such companies. ChowNow, for example, makes it a better move for a restaurant to own its own website, so it can redirect customers to a commission-free ordering platform instead of paying Doordash and Uber Eats a giant cut. Online marketing software is also complementary to independent domains. And so are the new point of sale systems; once you’ve captured the customer’s email address after selling them a cup of coffee, you need somewhere to send them when they open your coffee shop’s newsletter.

And, as it turns out, Google and Facebook are not especially excited to cede large, contiguous portions of the small business sales and marketing funnel to companies like Yelp and TripAdvisor. The big platforms want fragmentation so there are many bidders for traffic. They may try to create vertical-specific products, but they'll be cautious about it.

We can actually use some of their disclosures to put together a simple unit economics analysis, based on the annual numbers they give for retention and some other stats: 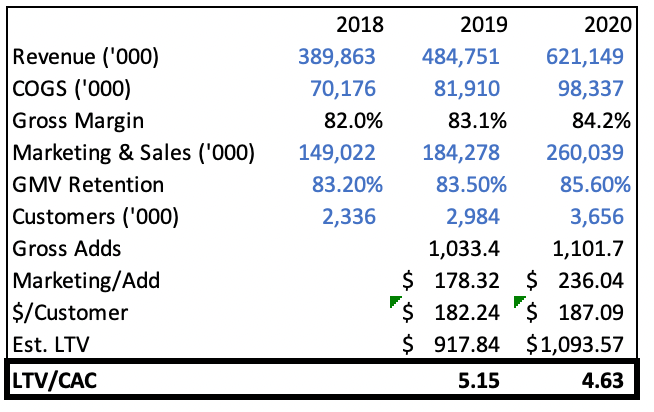 What I'm doing here is estimating the gross new customers SquareSpace acquires (treating GMV churn as a proxy for customer churn—this is probably aggressive, since some customers will be spending more over time, but is the closest we have). Then I look at revenue per customer (looking at revenue in a given year divided by the average of yearend and year-beginning customers, which is, again, imperfect). Finally, I look at how much gross profit those new customers are expected to return over their lifetime, and compare that to the cost of getting them. We end up with about 5.15x LTV/CAC in 2019, and 4.63x last year. That decline is largely driven by marketing dollars, and there may be a good excuse for that: if the company is spending more marketing money on retention than customer acquisition, it a) cuts churn (which reduces the number of gross adds required to hit a given net adds number) and b) increases marketing spendm so it doubly penalizes CAC. Customer lifetime value, for what that's worth, rose 19% Y/Y in 2020, and lifetime value per customer after marketing expense is still rising.

This is, directionally, about what you'd expect from a company that has figured out its product and marketing setups pretty well: the top-level metrics will get worse, because the company is always in the process of saturating one marketing channel and moving on to the next (for example, their pioneering and effective sponsorship of podcasts). If a company is getting a lower incremental ROI, but a satisfactory return on capital, it's hard to argue that they're getting worse. And, indeed, SquareSpace's growth and changing unit economics are both heavily driven by shrinking churn, meaning they're paying up a bit more for much more valuable customers—from 2019 to 2020, their marketing cost to acquire a new customer rose by $58, but their lifetime gross profit from that customer went up by $176.

Why is churn heading down? There are two reasons. First, SquareSpace as a site editor is famously easy-to-use; it's drag and drop, not type-and-refresh-and-curse-and-Google-and-repeat. If they'd been founded last year, they'd call this "low-code" or "no-code." Low-code and no-code means lock-in. You can't copy-paste what you've dragged-and-dropped, except one item at a time. All else being equal, as the median user gets less technical, the importance of being able to manipulate source code declines, which means that cleaner products with better export options, like Wordpress, lose share to products whose structure precludes an easy export button. The best and most complex sites will still use a full-featured option, but the median new site will, almost by definition, use something easier than average. Meanwhile, that same dynamic increases the expected lifetime value of the product targeting less sophisticated users, who will have a harder time switching to something more complex.

A second reason is e-commerce, and this is where SquareSpace gets very hard to evaluate. $143m of their $621m in revenue comes from their commerce unit, which collects revenue as a percentage of the value of transactions driven through the SquareSpace platform. That line item is growing 78% Y/Y (with GMV up 91% Y/Y). It includes online commerce for goods and services, scheduling, walling off members-only content, as well as an offline point-of-sale product.

E-commerce makes SquareSpace more of a bet on convergence with Shopify. Or rather, a bet that the Shopify thesis is fractally true: not only does the world need an alternative to Amazon, but it needs an alternative source of alternatives.

Clearbanc, the fintech company that makes working capital loans against digital ad campaigns and more, is raising money and rebranding as just Clearco to emphasize the fact that they provide generally useful business software, not just loans. This is an interesting development in light of the accidental versus intentional bank valuation gap.

One way to look at it is that sufficiently advanced underwriting is indistinguishable from excellent management. Clearbanc wanted to a) maximize the amount it could lend to any given customer, and b) minimize the risk. And there were many levers for doing that: if a customer was doing well on Facebook, Clear could suggest that they try running ads on Twitter and Snap, and lend against those ads, too. If margins were weak, Clear might have some advice for increasing margins—which, given the business model, means advice that directly adds collateral to each loan.

If you take the perspective that credit is the basic function of the economy, you can think of the entire universe of non-bank systems as a sort of franchise operation where the banking industry hires entrepreneurs with equity to farm out the tedious task of inventing new kinds of collateral that can be lent against. Clear may have drifted closer to a world where that's true.

Russia is withdrawing from the International Space Station in 2025 ($, FT) in order to work on a separate effort with China. The space industry involves lots of cross-subsidization from a) defense, b) pure research, c) centibillionaire science fiction fans, and d) occasionally, speculative capital. Each capital source has different advantages and limitations. This announcement is more of a tacit concession to economic reality: private companies have gotten competitive at supplying the ISS, so it's not an immediate loss. It's still inconvenient to lose one more source of implicit space subsidies, though.

Stack Overflow compiles some statistics on how often people copy and paste code from their site. In two weeks, Stack Overflow users borrowed 36 million snippets of code. Given the cost of developer time, and given just how frequently Stack Overflow shows up as the #1 result for technical queries, the parent company may, when it finally goes public, have one of the biggest gaps between social value and profitability outside of BioNTech, Moderna, and the like. It's hard to figure out ways for Stack Exchange to keep more of the value they create without breaking the loop that makes them such a good site in the first place—the whole point of their existence is to over technical Q&A without a paywall.

Design tool Figma is adding voice chat to its products. Audio as a medium has the interesting dynamic that it can be passive or active; people can use radio or Spotify as generic background noise, or as the one thing they're focused on at that moment. And this variability has a nice side benefit: if audio isn't background noise, it's still compatible with background visuals. So Figma is closing a loop by adding audio: instead of being the app where people implement designs that have been discussed somewhere else, it can be the venue for deciding what to do as well as doing it.

Yesterday, Chipotle reported solid revenue growth, and revealed that half of its orders are digital. On the earnings call, the company discussed the potential impact of a $15 minimum wage (150 to 200 basis points of margin, offset by 2-3 points of price increases). If the digitization of their business sticks around, though, this impact may be more muted. As with retailers, when people order ahead it's slightly easier to manage inventory and increase turnaround, and much easier to upsell them on related products. For a quick-service restaurant, the thing to manage is not inventory but labor; their goal is ensure that peak burritos per minute matches peak customers per minute as cheaply as possible. Even a few minutes of lead time from online ordering makes it possible to smooth out preparation. And, if they want to get very fancy, they can choose whether or not to offer time-consuming upsells based on how much labor slack there is at a given location. There are other benefits, too; last year's high turnover among independent restaurants means that there are more storefronts available for large chains to expand into, and one benefit of online ordering is that it tells companies where their customers tend to be just before lunchtime, which gives them much better data on where high-ROI store locations could be.