Charles Brewer is the leader and managing member of the Las Catalinas ownership group (Las Catalinas Holding Company, LLC). He is hands-on with every facet of the town’s development.

Charles was the lead developer of Glenwood Park in Atlanta, Georgia. Glenwood Park has won numerous development awards and is recognized as one of the best examples of new urbanism in the United States.

Previously, Charles was founder and CEO of MindSpring Enterprises. MindSpring grew to be one of the largest Internet Service Providers in the country, and consistently won praise for having the highest quality of service and customer satisfaction in the industry.

Charles is a Phi Beta Kappa graduate of Amherst College and received his MBA degree from Stanford. He lives with his wife and children in Atlanta, Georgia.

Stuart Meddin is a general partner in the Las Catalinas ownership group.

Stuart has been involved in commercial real estate and development since 1974, and created The Meddin Company in 1979. He specializes in urban retail properties and owns some of the most successful street-facing storefronts in Atlanta, including key sections of the Virginia Highland and Emory University retail areas.

Stuart is also a partner in the Glenwood Park development, where he leads the retail development and management team.

Tom Claugus is a general partner in the Las Catalinas ownership group.

He is the founder and majority shareholder of GMT Capital, an investment fund with approximately $3 billion in assets. The fund has achieved a 19% net compound return since inception and was recently ranked in the Top 50 hedge funds based on return by Barron’s. Tom also founded in 1993 and is chairman of GMT Exploration LLC, a private oil and gas exploration company with activities in Wyoming, Texas, and Alaska.

Tom financially supports a number of charities, most significantly CARE and Growth Through Learning, an organization that provides scholarships to Tanzanian children.

Running for a Dream 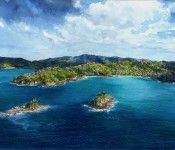 What is Las Catalinas? Las Catalinas is a new beach town located on the Guanacaste Coast of Costa … read more...