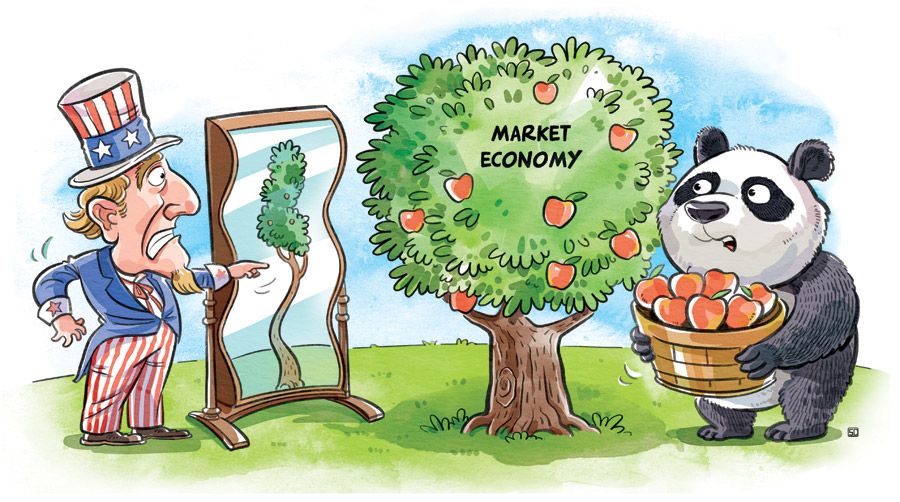 The country's remarkable economic achievements are attributable to socialist market economy, which gives full play to the advantages of both the socialist system and market economy, and have nothing to do with "state capitalism"

The United States equates China's economy with "state capitalism", saying socialist market economy is not real market economy but state-led protectionist and mercantilist economy, which, it claims justifies the imposition of high tariffs on Chinese goods.

This is not the first time a Western country has labeled China's economic model as "state capitalism". Some people are re-circulating the term in the West now to hide the real reason why the US has resorted to trade protectionism and imposed high tariffs on Chinese imports, namely, their concern over China's development road and economic system.

The US is a self-proclaimed representative of free market economy and free market capitalism, but the government's role has been particularly important in its economic development. Let us not forget, the US has resorted to protectionism from its founding to the end of World War II.

Using free market as a ploy to make profits

In the postwar period, too, the US administration has intervened in the economy to fulfill its self-interests even while promoting trade liberalization, as Keynesianism came to play the dominant role in US economic policymaking. For example, the US' total government spending increased from 26.8 percent of GDP in 1960 to 41.3 percent in 2010, and the number of its government employees increased from more than 4 million in 1940 to more than 22 million in 2010.

Some experts on innovation say, despite advocating "small government" and "free market", the US has been running massive public investment programs in technology and innovation for decades, which have brought the US great economic benefits. In fact, the US government has always been a central driver of innovation-led growth, from internet to biotechnology and even shale gas development. After the outbreak of the 2008 global financial crisis, the US once again resorted to state interventionism, and introduced huge financial rescue and fiscal stimulus packages to stabilize its economy.

Since taking office, President Donald Trump and his administration have been using interventionist policies, such as protectionism and immigration control measures, to realize their "America first" goal at the cost of the interests of people around the world. Which shows the "pure" free market economy and "true" laissez-faire that the US bandies about have never existed. Instead, capitalism as we see it today is closely related to "state capitalism". So to label China's socialist market economy as "state capitalism" is to confuse one thing with another.