The Real Reason Your City Has No Money 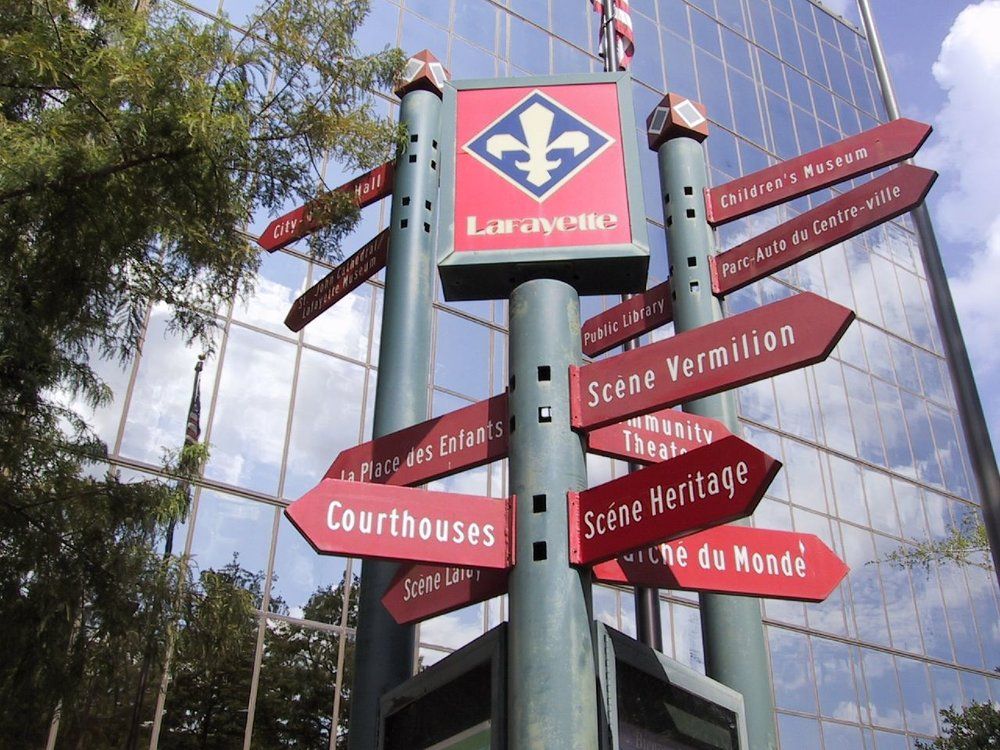 Lafayette, Louisiana, has a population of around 125,000. That makes it about the 200th largest city in the country; not really big but not really all that small either. It has a unique culture and geography, but the layout and design of the city are very ordinary American. Get outside of the core downtown and surrounding neighborhoods to visit the strip malls, big box stores and residential subdivisions and Lafayette looks like any other city you'll pass through.

I stress its unremarkable nature not to denigrate it in any way -- I love the city and I have a special fondness for the people of Lafayette -- but to help connect you, the reader, to a shared plight. Except for a small handful of North American cities -- literally five or less -- Lafayette provides an insight into why your city has no money.

Problems have solutions. Predicaments have outcomes. What is happening in Lafayette is not a problem; it's a predicament.

Along with my good friends and colleagues Joe Minicozzi and Josh McCarty of Urban 3, I was invited to work with the city of Lafayette to help them get a handle on why they could not keep up with infrastructure maintenance. Through a strange path, the city had found itself with a lawyer turned newspaper reporter -- a really sharp guy named Kevin Blanchard -- as their public works director. Questions that prior directors had found inconvenient to ask were now front and center.

Like most cities, Lafayette had the written reports detailing an enormously large backlog of infrastructure maintenance. At current spending rates, roads were going bad faster than they could be repaired. With aggressive tax increases, the rate of failure could be slowed, but not reversed. The story underground was even worse. Ironically, this news had historically been the rationale for building even more infrastructure (theory: this is a problem that we'll grow our way out of). That didn't make sense to Kevin or to the city's mayor, a guy named Joey Durel.

Joe, Josh and I interviewed all the city's department heads and key staff. We gathered as much data as we could (they had a lot). We analyzed and then mapped out all of the city's revenue streams by parcel. We then did the same for all of the city's expenses. This was the most comprehensive geographic analysis of a city's finances that I've ever seen completed. When we finished, we had a three dimensional map showing what parts of the city generated more revenue than expense (in business terms, this would be called profit) and what parts of the city generated more expense than revenue (again, in business terms, this is considered a loss).

Here's that map. In accounting terms, green equals profit and red equals loss. The higher the block goes, the larger the amount of profit/loss. If you have a sense of the basic layout of North American cities post World War II, you can figure out pretty easily what is going on here. 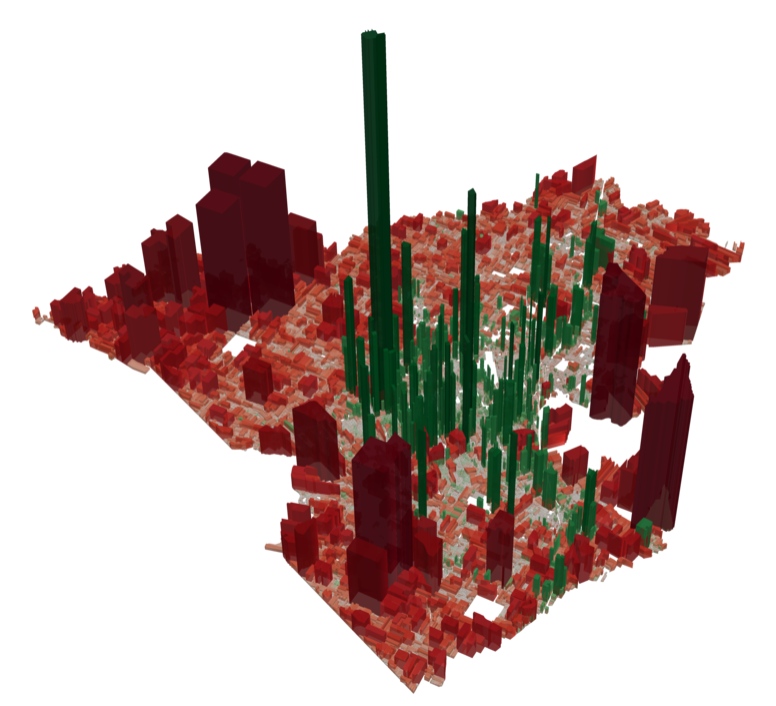 A blue/green version now available thanks to the work of a generous contributor (for those that are red/green colorblind). (Source: Urban3)

There are some remarkable things to note right off the top. When we added up the replacement cost of all of the city's infrastructure -- an expense we would anticipate them cumulatively experiencing roughly once a generation -- it came to $32 billion. When we added up the entire tax base of the city, all of the private wealth sustained by that infrastructure, it came to just $16 billion. This is fatal.

It's obvious to me why this is fatal, but for those of you for whom it is less clear, let me elaborate.

The median house in Lafayette costs roughly $150,000. A family living in this house would currently pay about $1,500 per year in taxes to the local government of which 10%, approximately $150, goes to maintenance of infrastructure (more is paid to the schools and regional government). A fraction of that $150 – it varies by year – is spent on actual pavement.

To maintain just the roads and drainage systems that have already been built, the family in that median house would need to have their taxes increase by $3,300 per year. That assumes no new roads are built and existing roadways are not widened or substantively improved. That is $3,300 in additional local taxes just to tread water.

"Using ratios we’ve experienced from other communities, it is likely that the total infrastructure revenue gap for that median home is closer to $8,000 per year."

That does not include underground utilities – sewer and water – or major facilities such as treatment plants, water towers and public buildings. Using ratios we’ve experienced from other communities, it is likely that the total infrastructure revenue gap for that median home is closer to $8,000 per year.

The median household income in Lafayette is $41,000. With the wealth that has been created by all this infrastructure investment, a median family living in the median house would need to have their city taxes go from $1,500 per year to $9,200 per year. To just take care of what they now have, one out of every five dollars this family makes would need to go to fixing roads, ditches and pipes. That will never happen.

Thus, Lafayette has a predicament. Infrastructure was supposed to serve them. Now they serve it.

All of the programs and incentives put in place by the federal and state governments to induce higher levels of growth by building more infrastructure has made the city of Lafayette functionally insolvent. Lafayette has collectively made more promises than it can keep and it's not even close. If they operated on accrual accounting -- where you account for your long term liabilities -- instead of a cash basis -- where you don't -- they would have been bankrupt decades ago. This is a pattern we see in every city we've examined. It is a byproduct of the American pattern of development we adopted everywhere after World War II.

There are two questions I'm commonly asked when I tell this story. The first is: how did this happen? The second: what do we do now?

The way this happened is pretty simple. At Strong Towns, we call it the Growth Ponzi Scheme. Through a combination of federal incentives, state programs and private capital, cities were able to rapidly grow by expanding horizontally. This provided the local government with the immediate revenues that come from new growth -- permit fees, utility fees, property tax increases, sales tax -- and, in exchange, the city takes on the long term responsibility of servicing and maintaining all the new infrastructure. The money comes in handy in the present while the future obligation is, well....a long time in the future.

"Humans are predisposed to highly value pleasure today and to deeply discount future pain, especially the more distant it is."

Psychologists call this temporal discounting. Humans are predisposed to highly value pleasure today and to deeply discount future pain, especially the more distant it is. It's easy today to rationalize that future expense, especially when you feel so assured that new growth will make those future people better off. This thinking is how you end up with two dollars of public infrastructure for every one dollar of private investment. This is how you spend yourself into bankruptcy.

This isn't a political, cultural or social failing. As humans, we're wired to act this way. Modernity removed most physical restraints, government removed the financial, and we did the rest.

So what do we do now? Well, we're about to create a huge pot of money at the federal level that we can spread around to try and solve this problem. Only, it's not a problem. It's a predicament; it has no solution, only outcomes.

It's a predicament that nearly every American city, with very few exceptions, finds itself in. Even if there was enough wealth and productivity to fix all of this -- and there isn't anything close to that amount -- we would be fools to spend it so unproductively.

All this infrastructure is a bad investment. America needs a different model of growth and development.

Tomorrow I'm going to show how the poor are financially propping up our cities and how, once we understand that, we can start making low risk investments that actually make us wealthier as a country while also improving our quality of life.

New to Strong Towns? Learn what we're about. 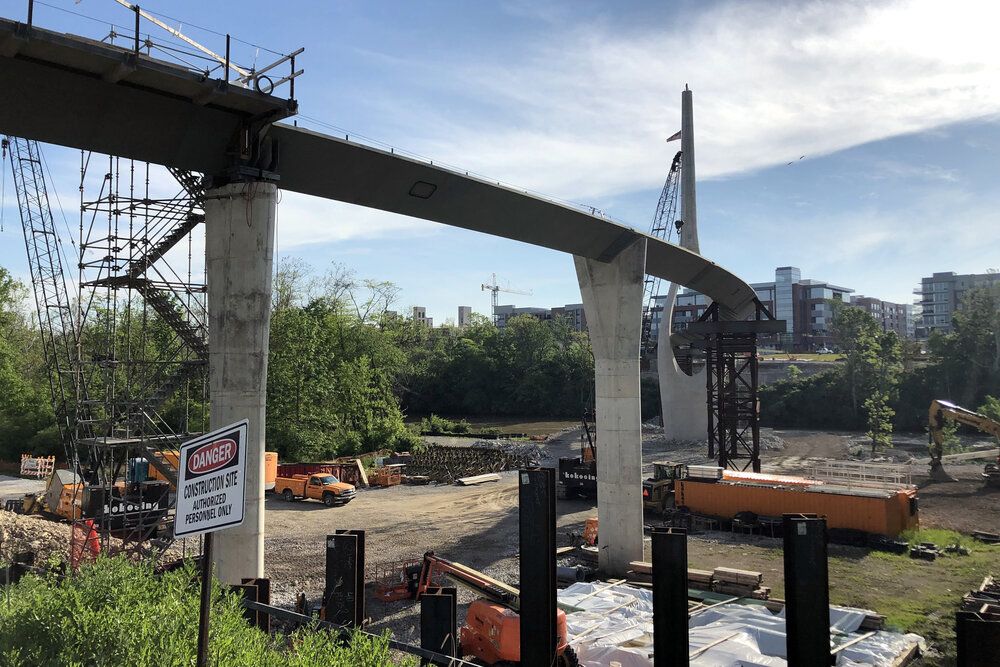 When it Comes to Infrastructure, the American Jobs Plan is Business as Usual

The Plan pretends to dig us out of the infrastructure hole we've dug ourselves into. In reality, it's making the hole bigger. 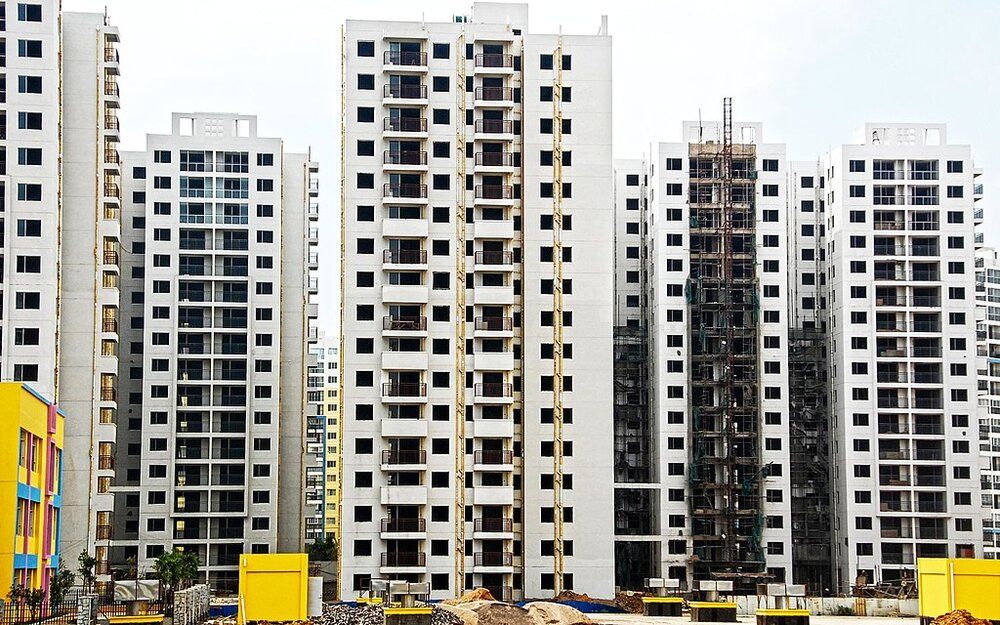 The American Jobs Plan Will Make Our Infrastructure Crisis Worse

There is nothing in the plan that is going to substantively change the trajectory of the North American development pattern.

After the Innovation Revolution, Who Will Clean the Streets?

In an era in which so many people aspire to be the next Steve Jobs, who will channel their ambition in the pursuit of caretaking work? 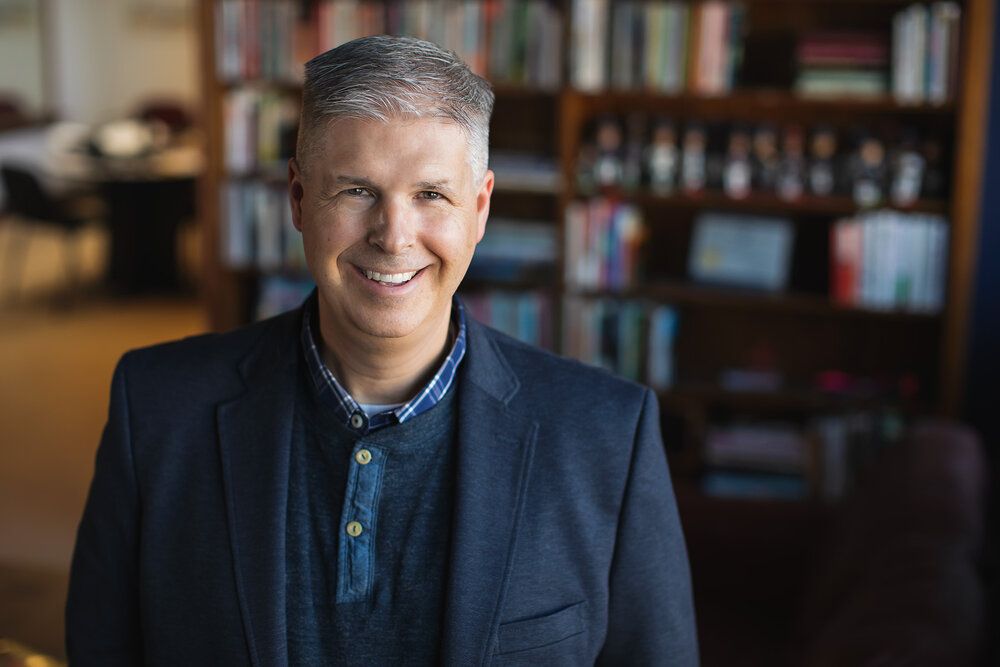 Charles Marohn—known as "Chuck" to friends and colleagues—is the founder and president of Strong Towns. He is a professional engineer and a land use planner with decades of experience. He holds a bachelor’s degree in civil engineering and a Master of Urban and Regional Planning, both from the University of Minnesota.

Marohn is the author of Strong Towns: A Bottom-Up Revolution to Rebuild American Prosperity (Wiley, 2019). He hosts the Strong Towns Podcast and is a primary writer for Strong Towns’ web content. He has presented Strong Towns concepts in hundreds of cities and towns across North America. Planetizen named him one of the 10 Most Influential Urbanists of all time.