The Fantastic Jungles of Henri Rousseau 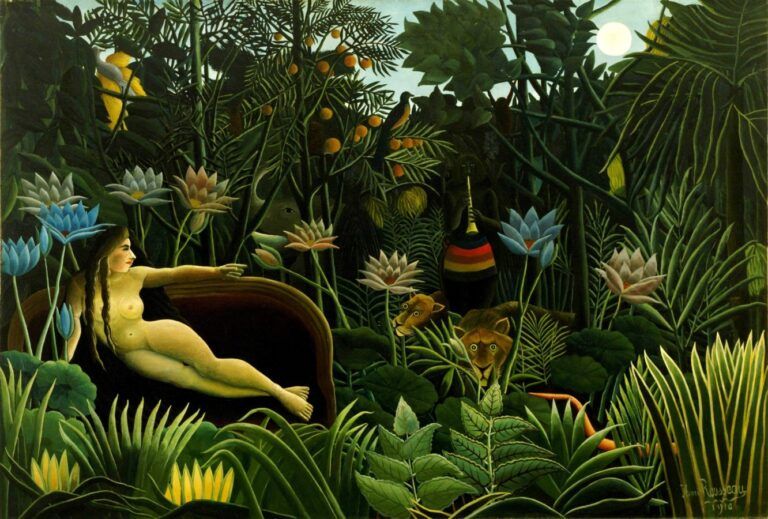 Henri Rousseau was a French painter who painted in the Naïve or Primitive manner. He was also known as Le Douanier (the customs officer), which was a humorous description of his occupation as a toll collector. He was self-taught and ridiculed during his lifetime by critics, but after his death he came to be recognized as a self-taught genius whose works are of high artistic quality. Welcome to the fantastic jungles of Henri Rousseau!

Well, fun fact. Rousseau is the most known of the paintings depicting jungles. But, he never saw any, he never traveled outside France! His inspiration came from illustrations in children's books and the botanical gardens in Paris, as well as tableaux of taxidermy wild animals. He had also met soldiers during his term of service who had survived the French expedition to Mexico, and he listened to their stories of the subtropical country they had encountered.

Rousseau painted around 25 paintings with a jungle theme. Those densely packed, enigmatic fantasies were painted mostly between the years of 1904 and 1910. In this article we invite you to the dreamy world of Rousseau's jungle.

Be careful, there will be a lot of dangerous animals ahead!

1. Tiger in a Tropical Storm 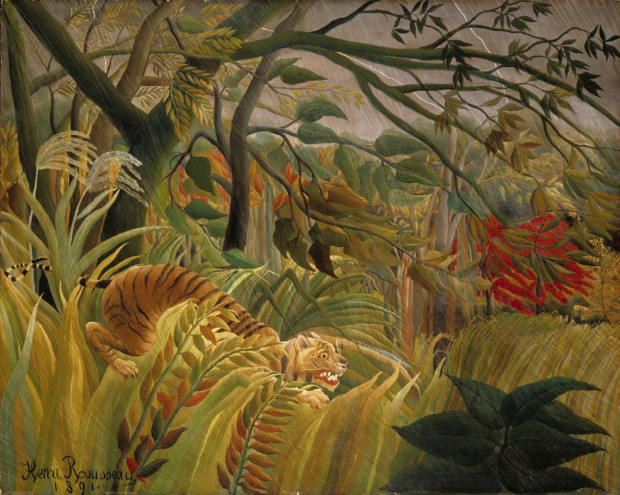 It is the first jungle painting of Rousseau. It shows a tiger, illuminated by a flash of lightning, preparing to pounce on its prey in the midst of a raging gale. The artist wanted to exhibit his paintings at the Paris Salon but was rejected. In the end, he exhibited it under the title Surpris!, at the Salon des Indépendants, which was unjuried and open to all artists. The painting received mixed reviews. Most critics mocked Rousseau's work as childish, but Félix Vallotton (one of my favorite artists, check our article about his woodcuts here) said of it:

"His tiger surprising its prey is a 'must-see'; it's the alpha and omega of painting and so disconcerting that, before so much competency and childish naïveté, the most deeply rooted convictions are held up and questioned."

Rousseau in 1891 was 47 years old. He started to paint when he was 35. That's a good lesson, it is never too late for your passions!

2. The Hungry Lion Throws Itself on the Antelope 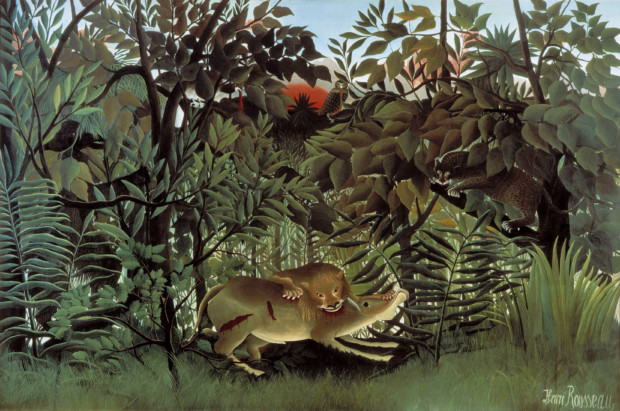 The Hungry Lion was the second jungle painting to mark Rousseau's return to this genre after a ten-year hiatus caused by the generally negative reception to Tiger in a Tropical Storm. Rousseau based the central pair of animals on a diorama of stuffed animals at the Paris Muséum national d'histoire naturelle, entitled Senegal Lion Devouring an Antelope. The painting was presented alongside works by the young painters Henri Matisse, André Derain, and Maurice de Vlaminck, whose explosive color and bold brush strokes led one critic to describe this landmark exhibition as the "cage aux fauves" (cage of wild beasts). This epithet gave rise to the term "fauvism," still used today to describe the early work of Rousseau's young colleagues.

3. The Repast of the Lion 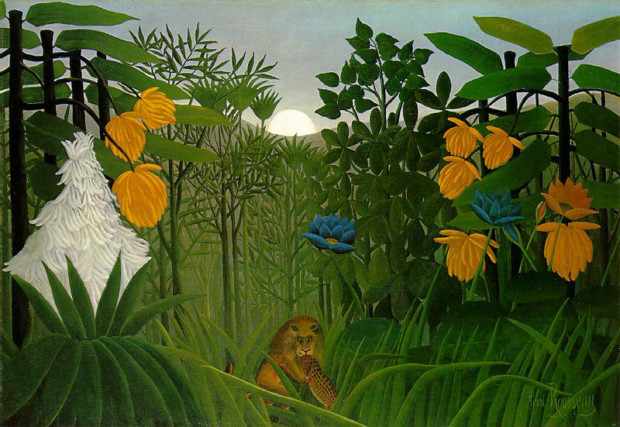 This work was probably shown in the Salon d'Automne of 1907, but it treats a theme that Rousseau first explored in Tiger in a Tropical Storm of 1891. The jungle pictures of Rousseau were understood here not merely as one artist's quirky fixation, but as part of a broader cultural phenomenon, namely the French fascination with exoticism during the nation's colonial expansion. 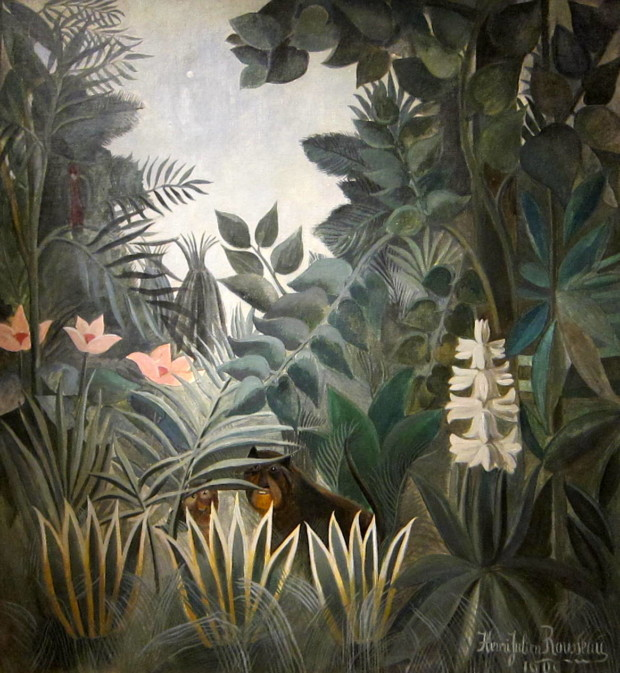 Rousseau exaggerated the size of common plants and flowers, creating a lush environment for the creatures that populated his fantasy landscapes. The animals sometimes blend into the background or hide in the trees, like on this painting from National Gallery of Art in Washington. I always wonder what kind of animals we see - lions? Monkeys? I have no idea! 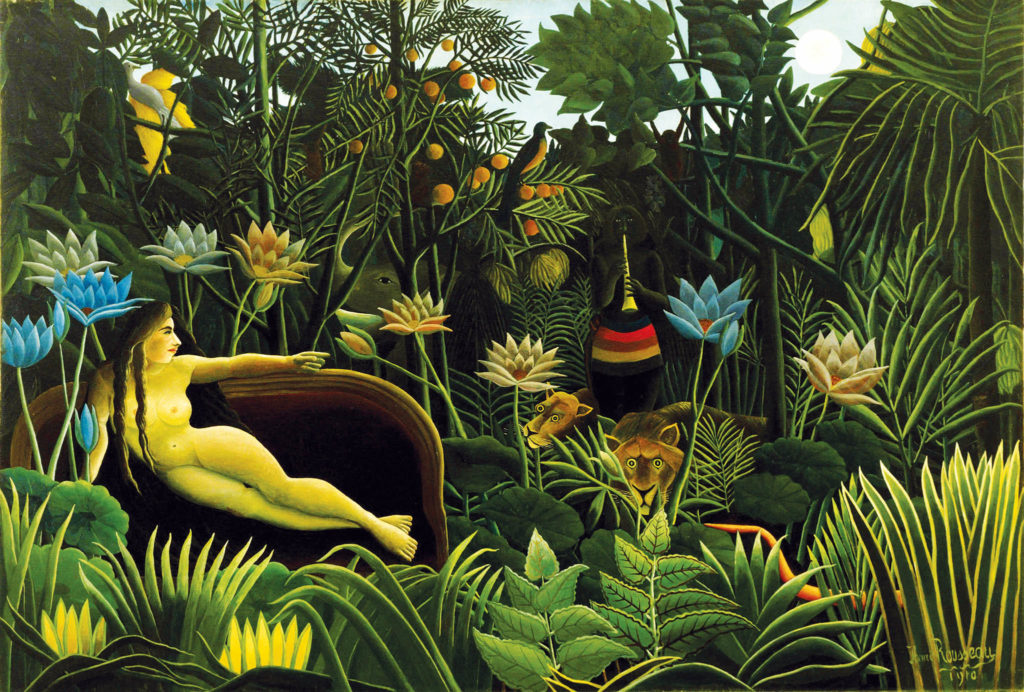 The Dream is Rousseau's last completed work, first exhibited few months before artist's death on 2 September 1910. As you know, Rousseau's earlier works had received a negative reception, but this time poet and critic Guillaume Apollinaire remarked:

"The picture radiates beauty, that is indisputable. I believe nobody will laugh this year."

The Dream is the largest of the jungle paintings, measuring 6' 8½" x 9' 9½" (204.5 x 298.5 cm). It features a portrait of Jadwiga, Rousseau's Polish mistress from his youth, lying naked on a divan gazing over a landscape of lush jungle foliage, including lotus flowers, and animals including birds, monkeys, an elephant, a lion and a lioness, and a snake. Suspecting that some viewers did not understand the painting, Rousseau wrote a poem to accompany it, Inscription pour Le Rêve:

Yadwigha in a beautiful dreamHaving fallen gently to sleepHeard the sounds of a reed instrumentPlayed by a well-intentioned [snake] charmer.As the moon reflectedOn the rivers [or flowers], the verdant trees,The wild snakes lend an earTo the joyous tunes of the instrument.

Rousseau's work continued to be derided by the critics up to and after his death in 1910, but he won followers among his contemporaries: Picasso, Matisse, and Toulouse-Lautrec - they all loved his works.

We love art history and writing about it. Your support helps us to sustain DailyArt Magazine and keep it running.

DailyArt Magazine needs your support. Every contribution, however big or small, is very valuable for our future. Thanks to it, we will be able to sustain and grow the Magazine. Thank you for your help!

Art Historian, founder and CEO of DailyArtMagazine.com and DailyArt mobile app. But to be honest, her greatest accomplishment is being the owner of Pimpek the Cat. 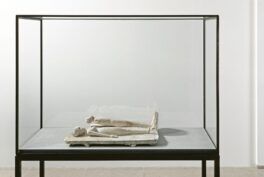 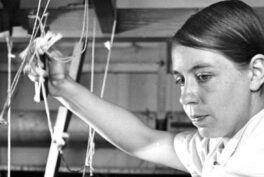 Frauhaus: Gunta Stölzl, Walter Gropius, and the Women of the Bauhaus

The women of the Bauhaus, attracted to the school by a lie, were marginalised by its male masters and forced into a single workshop. Under the... 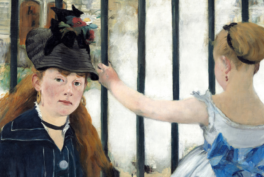 Painting of the Week: Edouard Manet, The Railway

In 1873 when this painting was created by the realist master Édouard Manet, the Gare Saint–Lazare was the largest and busiest train station in... 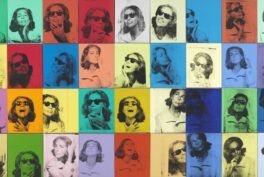 An innocent visit to the Whitney Museum of American Art in the West Village of New York City on Sunday, December 9, turned into something more. The...