The Contrarian Economist: An Interview with Prof. Tyler Cowen

Prof. Cowen is an economics professor at George Mason University. He received his Ph.D. in economics from Harvard, and is the author of several bestselling books.

Thanks to Prof. Cowen for taking the time to provide such thoughtful answers.

JIMMY LICON: Many libertarians criticized the FDA and CDC during the Covid pandemic, arguing their overly cautious approach cost lives on net. Do you agree? And if so, do you think that’s reason to seriously reform those agencies?

TYLER COWEN: I strongly agree. The FDA was far too slow to approve mass testing (which they did only recently), did not seriously consider Human Challenge Trials for the vaccines, and was later too slow with vaccine approval. We needed to be on a kind of wartime footing for Covid-19, and sadly we were not.

The CDC botched the production of its Covid test, did not allow other tests to fill the void in a timely manner, and throughout has made a series of bad calls on Covid-19, ranging from masks to airborne transmission to outdoor transmission to its possible origins.

I am all for reforming both agencies, but frankly it will not be an easy fix. Personnel is policy so often in Washington, D.C., and I am not sure exactly what we should do. But they are broken, both of them, and the first step is to realize that. 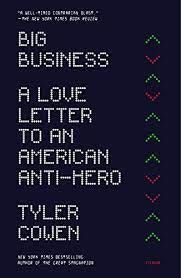 JL: In your 2019 book—Big Business: A Love Letter to an American Anti-Hero—you defend big business. This strikes many as wrong. Against this, why is big business good?

TC: Rather than saying that big business is intrinsically good, I would instead suggest that American big business, circa 2019 (and later), is very seriously underrated.

Big business comes under a lot of heavy criticism, from both the left wing and the right wing. Supposedly it is all about exploitation, racism, greed, income inequality, insufficient national loyalty, and many more evils, depending on whom you are listening to. The major tech companies have become extremely unpopular with America’s intellectual class. You rarely hear defenses of big business.

The more prosaic truths is that big businesses provide customers with services of extreme value, typically at better prices. Much of big tech literally is for free. Big business pays higher wages and on average offers much better benefits and better job security. Most actual users are very happy with the services they receive from the tech companies. Major businesses such as Amazon, Zoom, and Pfizer played very significant roles in helping us deal with the Covid-19 pandemic. Big business also has been in the vanguard of many movements for social progress, including rights for same-sex partners.

Overall, if you look at the actual evidence, American big business is far better than its media reputation. What my book does is to look at the evidence dispassionately, and yes I do accept some of the criticisms.

JL: Many people decry the loss of good jobs, even when they acknowledge consumer prices are generally falling. Do you think American economic policy often puts the interests of consumers before the interests of workers?

TC: I think American policy, whether economic or not, matches pretty closely to the wishes of the median American voter. And of course that person is both a consumer and worker, though sometimes "a mom" or "a dad" as well, and not always working.

If you look at the major components of state and federal budgets, they are mostly pretty popular with voters, for better or worse.

I don’t think policy is the main reason why the American middle class has thinned out. I would instead place greater causal emphasis on globalization, automation, the shift to a service sector economy, the proliferation of single-parent families, and our greater ability to measure the actual outputs of workers. If policy had tried much harder to preserve worker incomes, I doubt if we could have reversed more than 10-15% of those changes, and that would have come at pretty high economic costs, both to America and to the broader world.

People need to deal with what has happened. Trying to bring back labor unions, or to jerry rig some particular law, isn’t going to do it.

JL: The political scientist, Michael Beckley—in Unrivaled: Why America Will Remain the World's Sole Superpower—argues if we look at the economic details, instead of crude measurements like GDP, we find good evidence that the United States will remain the world’s sole superpower for decades to come, if not longer. What do you make of that assessment?

TC: I think that is mainly a semantic question. I would say China is already a major superpower in Asia, though only in Asia for the most part. The United States however is far, far better at cultivating allies with shared commonality of interest. This is one of China’s greatest weaknesses. Their line-up maybe includes Cambodia, North Korea, and Pakistan, and even in those locales they are feared and mistrusted.

So I do think the United States will remain the most influential nation for a long time to come. The strong position of English and American multinationals in the internet will strengthen this all the more. That said, we will not in general get out way globally, just look at Syria and Iraq and Iran, among many other examples. Communist Cuba is still with us as well.

JL: I’m a philosopher, and you’re an economist. Do you think there are economic insights and tools philosophers could benefit from? What about vice versa?

TC: Philosophers are much better readers than economists are, and (some of them) are better at being self-critical and insisting on ever greater levels of depth. And they recognize the complexity of normative statements much better than economists do. Those are big advantages.

Working back toward the other direction, philosophers simply are not interested enough in basic empirical facts, in understanding statistics, or in understanding expected value theory (of course there are exceptions, especially for the latter point).

I also find that many philosophers, including many of the best ones, tend to be interested only in speaking with other philosophers. That is a sign of narrowness and provinciality, and it relates to the relative lack of interest in the empirical. You would not have found the same in David Hume, for instance, as his six-volume History of England remains a classic, as do his writings on economics and the arts.

JL: What political, social, or economic trend receives too little attention from intellectuals and the public? Why is that trend important, yet ignored?

TC: I used to say "risk of a major pandemic"! But that is no longer ignored.

I think the overall costs of government regulation catch the attention of many economists, but not so much public intellectuals or the public as a whole. If you look at American health care, or the costs of living in a major metropolitan area, regulation has made the products more costly and lowered living standards significantly. I am not sure we are getting such a good deal for these much higher costs.

I think also the continued risk of a major nuclear war receives far too little attention. It is a bit like the pandemic. "Well, we haven’t had nuclear weapons used in a long time, so I am not going to think about them so hard…"

That is a very dangerous way to approach the problem. Obviously biowarfare is another major risk.

JL: Over the course of your career, which intellectual has most influenced you? What did you learn from them, and how has it impacted your work?

TC: The Austrian School of Economics has influenced me most, though I am not quite sure how to parcel that out across particular individuals. In any case, the School as a whole was the influence much more than any single person. Much of my career has been trying to work out the problems posed by the Austrian School with respect to economic value, dynamic market processes, the causes of economic growth, and so on.

I also have been deeply influenced by my early readings of Plato and the "early modern" philosophers, such as Descartes, Locke, Berkeley, Hume, etc. Plato gave me a sense of the importance of dialog and multiple perspectives, while the latter writers illustrate that even very very smart people cannot really solve the tough problems.

JL: Was there a time when you failed, in either your personal or professional life, spectacularly? What did you learn from that failure, and how has it improved your life?

TC: Well, I spent the first major part of my career in relative obscurity, basically before blogging and the "internet as we know it" came along. Was that a failure? It depends on your point of view. It ended up being a good time for me to invest in learning all sorts of things, and to travel and explore the world, away from the pressures of producing content every single day. I can say that most well-known economists became well-known at much younger ages than I did.

TC: I don’t want them to say anything then. I am writing and speaking for people today, a big enough audience. Today people say plenty of things about me, and I am fine with that. Some of the most hostile comments are in a way the most positive, because some people think my status ought to be much lower. That is real flattery!

I insist of being cremated or dumped into the ocean, and my google archive can persist for some while, but fading rapidly into de facto oblivion. As it should be.