We live in the anthropocene, the human era. All around us the world is shaped to make our lives easier. We dam rivers, build farms, and build buildings. When you’re looking at the landscape, manmade constructions often stand out immediately. One major reason for this is that manmade landscapes, especially modern ones, are often built out of grids. This gridding of the world is to a large extent part of what James C. Scott refers to in Seeings LIke a State as legibility, the transformation of the world into a form that is more easily understood, especially by far off rulers and bureaucrats. This takes the form of a sorting of the world into forms which can be more easily manipulated, and also the collapsing of high fidelity information into low fidelity information. These forces work together: a farm is sorted into rows and grids to more easily count total area and number of plants, and then those numbers enter some report which details yields relative to the number of rows.

However, as Scott’s work points out, both of these are not necessary optimal for the things we actually care about, like maintaining a long term supply of high quality food. In How Asia Works by Joe Studwell, the author documents how smaller less legible farms in Asia had higher crop yields than the larger plantation style monocrop farming introduced by the British. In some sense this should be obvious: if growing things in perfect rows were optimal, plants would be doing this naturally. Building on top of this, the low fidelity compressions we use to understand these systems often lose important context. For example, by looking only at yields, one might not notice that the plants are becoming less nutritious or that soil is being depleted.

Given all these negatives, why is legibility so omnipresent in human systems? Scott focuses on questions of control and coercion, which are valid, but I want to take things in a different direction. I think fundamentally, legibility is a labor saving technology, particularly for cognitive labor. By cognitive labor here, I don’t just mean bureaucratic or white-collar labor.

Let us take the case of a machinist. To build a piece of complex machinery like a car, they might have a workshop and spend decades learning how to produce every part of the car. You can pay them to make you a car, but it will be very expensive because you are effectively paying for the not just the cognitive labor used to assemble your particular car, but also the amortized cost of the cognitive labor to acquire the knowledge and skills necessary to assemble your car correctly.

If you want things to be cheaper, you have to find some way of removing the cognitive labor by making individual skills less important. To accomplish this, the production line is created. At its heart, the production line is the regularization of the creation process in order to reduce the need for extensive skill building. Implicit knowledge is instead written into manuals that are shareable. What used to be one unified process is broken up into discrete components. Tooling is standardized so that one part of the factory need not understand the other parts.

In other words, the factory is more legible than the workshop in order to require less cognitive labor from its workers.

Even in today’s world, where broadly skilled labor is vastly more common than in the past, fielding people with skills is expensive. Cognitive labor is so expensive, that most of mankind’s great projects would have been unfeasible if not for an ability to use it efficiently.Faced with this, we found an elegant solution: just force the world to be less complicated. Navigating cities takes too much time to learn? Just make the rows into perfect grids! It’s too much effort to translate between different regional weights and measures? Just mandate a standard that everyone must follow! That which evolved organically is destroyed, and replaced with the inorganic forms we’ve come to take for granted. 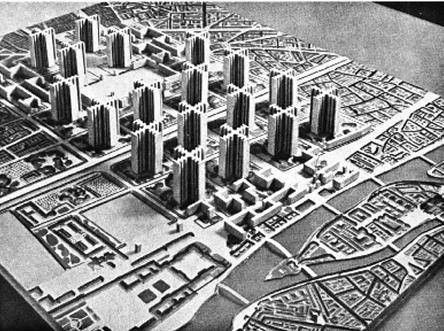 If you are someone who works in computing, some of the above might have rung a bell. What do we do when we have to act on data, but we have limited compute? We do precomputations like sorting to put the data into a form that is easier for us to work on. Rows of data get put into a database, just like the scientific forestry of Prussia sought to put trees into a grid. We also compress things, building lower fidelity representations of objects in order to more easily transmit them and have them be understood by machines without direct access to the data. This mirrors things like frontage taxes, which attempt to estimate building size by writing down the area of the building face which is towards the street. All of these parallels make sense, because in both cases we have some limited supply of Compute, the ability to understand and manipulate concepts, which we must use efficiently should we desire to accomplish large tasks.

However, compute is getting cheaper by the day.

As computers become faster and faster, compute is becoming cheaper at a rapid pace. So far, this has manifested in the classic Software Eating the World sense, with what used to be whole buildings of skilled white-collar professionals (the archetype of cognitive labor), replaced with some lines of code in a datacenter. As this process accelerates, we see whole new avenues of commerce that would historically been impossible just due to the labor costs they would have required. For example, the "creator economy", where individuals are making a living by producing independent journalism or educational content, is only possible because software exists to do the work of payment processing, distribution, and all the other little bits of bookkeeping that historically would have been too expensive for the small margins those industries provide to sustain. Similarly, Taxi drivers used to take 3–4 years of training in order to be able to effectively navigate a city, but once Google Maps could take over the cognitive labor of navigation, the skill threshold dropped. Now practically anyone can make a living as a driver (and the cost of hiring drivers has plummeted).

Alongside this, there are hints that the need for a legible world is becoming smaller over time. In a world where everyone has Google Maps, how important is it to have a highly legible gridded street system? When a program could easily convert seamlessly between different units of measure without the user even being aware, how important is it unit standardization? If machine translation continues to approach perfection, what will be the point of putting in lots of effort to standardize languages within a country?

Already this is happening, even though right now we only have access to "low quality" compute. We can do rigid transformations and vast calculations, but not the sort of fuzzy problems that human cognitive labor is often leveraged to solve. However, advancements in artificial intelligence are changing this rapidly. If progress continues at its current pace, it seems inevitable that we will have access to a nigh-infinite supply of high quality cognitive labor. This is often pointed towards as a harbinger of doom, a specter of mass unemployment and a world where "Humans Need Not Apply". However, I suggest that instead this is an opportunity to reshape the human landscape in profound ways. Ways that will not only make for a more pleasant world, but a more sustainable one. When the marginal cost for cognitive labor is 0, the costs of legibility outweigh the benefits.

When you have robots doing farming, you can give up the grid and chose a more organic/generally optimal structure. The robot farmer will be able to navigate that just as easily as a modern combine harvester navigates a grid. Similarly the software that manages the farm won’t have any issues estimating yield and plant health, monitoring a twisting grove instead of a grid will be the difference of a few extra compute cycles. Today, recycling is expensive and inefficient largely because we don’t have any machines that can actually sort things and prepare them for processing. In a world of cheap cognitive labor, you would be able to throw all your waste into one chute, and have a machine sort and clean everything, again for minimal marginal cost. This goes beyond individual machines or plants though. One big reason that chains stores dominate is that they are more legible to banks and building owners, but when you can field the equivalent of a personal assessor to every storefront, it stops being expensive to pick out the reliable small businesses from the unreliable ones. When you start to think down these avenues, you begin to realize just how much the cost of skilled labor shapes the appearance of the manmade world. 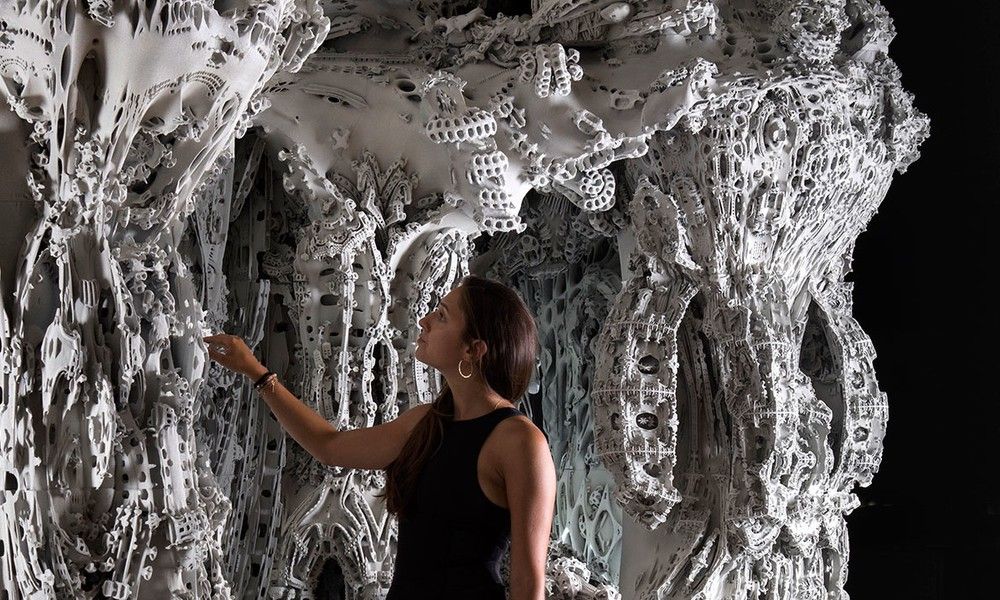 Given this futute, instead of worrying about a labor surplus, we should elevate our visions of what the environment we live in can look like! We could build cities where every stone is a work of art, and every home is a custom made expression of ones’ spirit. We can take all the ways in which our society is wasteful because its too much work to be efficient, and turn them into sources of abundance.

If we allow ourselves to imagine what it means to live in a world that is built for human flourishing, not for minimizing labor costs, an awesome vista of possibility becomes clear.

I’m a software developer in Sacramento. I like exploring the obscure, celebrating the unique, art that knows what it is, and silhouetted trees at twilight

Organizations should put competent people in charge of things and fire those who prove incompetent — Much of our government bureaucracy is structured around a deep-seated fear of someone somewhere doing the wrong thing. Whenever funding is proposed, it is almost always tied to a mountain of reporting requirements and strict controls out of worries of grift or improper usage. Whenever power is delegated, it is…

Last time in The Gentrification Aesthetic, we covered why we might not want investors/capital to totally dominate the project of development. Development being the repurposing and reshaping of the urban environment, from opening a restaurant to building an apartment complex. If we accept that premise, what alternatives do we have…

How capital reshapes our environment — You’ve seen it happen. The cutesy old shops replaced by "modern" sans-serif black text on a white background juice bars. The colorful and varied street replaced with steel and glass. This is not gentrification: it’s the gentrification aesthetic. Others have written about this better, but gentrification can occur even as…

The Beauty of Illegibility

Modern web design is highly oriented towards making the digital environment maximally legible. Designers want a site to be easy to use. They want users to be able to navigate to their destination in the minimum number of clicks. The designer wants the discovery of new destinations to require as…

Note: This is a less-edited version of my article on Exponents that includes more details and math — Year after year, global CO2 levels reach unprecedented heights. As CO2 levels rise, so does global temperature, and we are faced with catastrophic consequences for the world. As a result, there have been a variety of proposals brought forward as to how we can address this unprecedented problem. Some in…

Love podcasts or audiobooks? Learn on the go with our new app.

Data Science is Disrupting the Way We Look at Data

Inside the Clubcard Panopticon: Why Dominic Cummings’ Seeing Room might not see all that much

How To Connect To A Snowflake Database With Python