Study finds elk are too smart for their own good, and the good of Utah 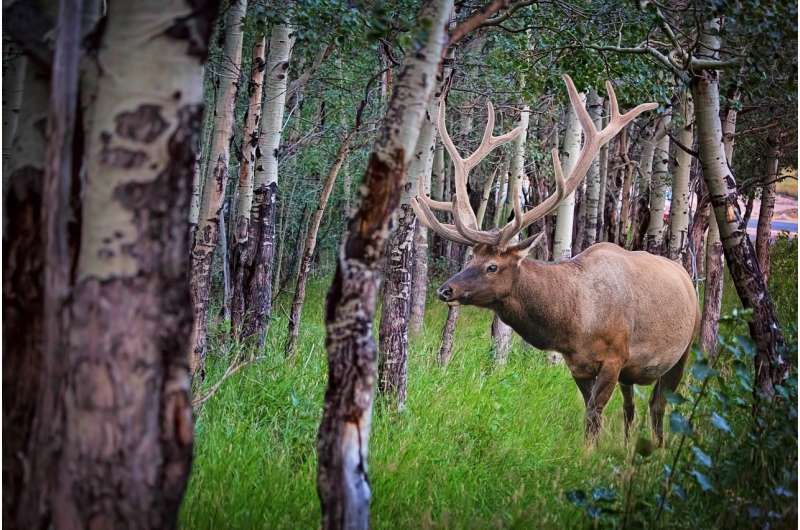 Animals in the wild are often smarter than we give them credit for. This time it's the elk.

The state-funded study found elks' use of public land diminished by over 30 percent by the middle of rifle season. "It's crazy; on the opening day of the hunt, they move, and on the closing day they move back," said study senior author and BYU professor Brock McMillan. "It's almost like they're thinking, 'Oh, all these trucks are coming, it's opening day, better move.'"

"They understand death," added fellow BYU professor Randy Larsen. "They get it; they've figured it out."

While this is fascinating animal behavior, it's actually quite problematic for the Utah Division of Wildlife Resources. That's because dense elk populations can be harmful to habitats throughout the state, even disrupting farming operations as they are prone to steal food from livestock grazing on private lands and cause damage to farming infrastructure. In fact, they're so disruptive that the state is bound by law to manage elk populations.

"The state had been getting complaints on both sides of the issue with elk migrating to private lands," Larsen said. "One side says there are not enough elk to hunt—"Why are you issuing permits?"—while private owners are saying "The elk are eating us out of house and home!'"

Helicopter flights following hunting seasons confirmed the problem: the elk had successfully found refuge from frustrated hunters on the private property of frustrated landowners, resulting in elk population sizes being significantly higher than the state is supposed to have by code.

Hoping to find a viable solution to prevent elk from migrating to private lands, the state added limited private-land hunting permits starting in 2016. BYU then jumped in to track the elk to see if the plan would work.

Between January 2015 and March 2017, BYU researchers and students helped the DWR capture 445 male and female elk along the Wasatch Front in central Utah. The elk were fitted with GPS collars and released. The teams then tracked the animals each season for three years and used logistic regression models and Bayesian change point analyses to determine the differences in daily use of public lands.

Author Maksim Sergeyev, a BYU master's student at the time of the study, said it's not often your research shows a direct and clear link to application and management decisions.

"Allowing private-land elk hunting in collaboration with private landowners has helped Utah keep these elk populations in balance with their habitat," said Sergeyev, now a Ph.D. candidate at Caesar Kleberg Wildlife Research Institute at Texas A&M University—Kingsville. "Now there are more elk on public lands when the hunt starts and less elk on private lands negatively impacting industries and habitats."

As a result of the work, which was a collaborative effort funded by the State of Utah, Sportsmen for Fish and Wildlife, the Rocky Mountain Elk Foundation and other partners, Utah has now permanently implemented private-land hunting permits for elk. Hunters must coordinate with the private landowners on using those permits, but it now gives landowners the ability to take care of the problem as needed.

The most comprehensive sci-tech news coverage on the web