Science, philanthropy, and tech (and crypto)

In the last two years, there’s been several billion dollars’ worth of new initiatives that aim to improve how science is done. I wrote a case study about why this happened, and how funding for science has improved in tech over the last decade. Research came from both reading and interviews with those in the space.

I suppose now’s as good as time as any to share that I’ve been researching philanthropy in tech and crypto for the past six months. It’s been extremely fun to be heads down in creative monomania again.

This is the first chunk I’ve released so far; more to come soon, and hopefully a longer explanation of what I’m up to.

For those who sit between science and tech, it’s hard not to notice the proliferation of new initiatives launched in the last two years, aimed at making major improvements in the life sciences especially.

While I don’t have a science background, nor any personal relationship to the space (other than knowing and liking many of the folks involved), I became interested in learning why the space changed so suddenly, particularly from a philanthropic lens. Figuring out what worked in science can help us tackle other, similarly-shaped problems in the world.

To understand what happened, I looked at examples of science-related efforts in tech over the past ten years (roughly 2011-2021). I looked for patterns that would help me extrapolate the norms and values of the time, as well as inflection points that shifted those attitudes. I also interviewed a number of people in the space to help me fill in the gaps, as well as to understand what they value and what success looks like.

A caveat: It’s rare, if not impossible, to produce clean answers to messy questions like "why did this culture change," so please treat this piece as a starting point for further research.

If you don’t want to read the whole post, you can jump to the summary.

When people say they want to "do science better," which issues are they trying to address, and how?

There are several observations that seem to be widely recognized by those who work in and around science. These topics have been covered extensively and in greater detail elsewhere, so I’ll touch on them only briefly:

As a scientist, getting funding is slow and bureaucratic

The popularity of Fast Grants, a rapid grants program started in response to the COVID-19 pandemic, illustrates the lack of options for scientists. Its creators note in a retrospective that they were surprised at how many applicants came from top twenty research institutions: "We didn’t expect people at top universities to struggle so much with funding during the pandemic," yet 64% of respondents to a survey sent to grant recipients said that their work wouldn’t have happened at all without a Fast Grant.

The rewards system in academia, while robust, doesn’t select for the best work

Scientists are expected to publish their findings in journals, and their reputation can be measured by citations. But peer review selects for consensus rather than risk-taking, and scientists feel pressured to publish for quantity rather than quality, among a host of other concerns.

Early-career scientists are at a disadvantage

Science is trending older and towards scientists with demonstrated experience. Most NIH grant funding goes to older scientists, and the age of a Nobel Prize-winning discovery by scientists is increasing.

TopNewCommunity
27: Friend groupsKevin Kwok has a schtick about how friend groups underinvest in themselves. A group of people with high mutual trust, shared interests, and low… 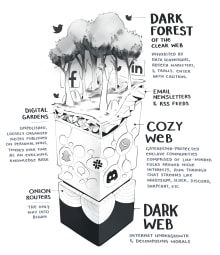 22: Working in PublicI've published a book about online communities, told through the story of open source developers. It's called Working in Public: The Making and…
24: MonasteriesI wrote about the crash of our social markets at the start of the pandemic. While much has been made of the recovery of our financial markets…
See all
© 2022 Nadia Eghbal
Privacy ∙ Terms ∙ Collection notice
Publish on Substack
Substack is the home for great writing