Powerful forces wanted freeways all over SF. Here's how they were stopped 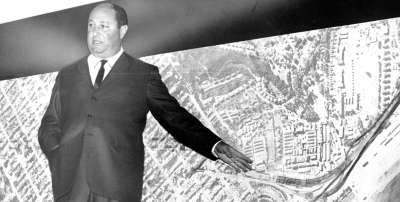 In the 1950s, San Francisco was slated to be crisscrossed by a network of freeways. They would have moved traffic in and out of the city more efficiently, but they would also have obliterated hundreds of homes and businesses and altered the character of many neighborhoods.

The previous Portals described how a coalition of politicians, businesspeople, newspapers and — most crucially — ordinary people created what is now known as the Freeway Revolt. Residents of two neighborhoods that stood to be torn apart by the freeways, Glen Park and the Sunset, led the resistance.

In 1955, a Sunset resident and property developer named Christopher McKeon realized that the proposed Western Freeway would split his neighborhood in half. He went door to door and used direct mail to create an anti-freeway organization called the Property Owners’ Association of San Francisco.

Joining McKeon was a Catholic priest, the Rev. Harold Collins, whose St. Cecilia parish stood in the path of the planned freeway. Starting in late 1955, the two led packed community meetings in protest of the scheme.

In "Growing Up in San Francisco’s Western Neighborhoods," Frank Dunnigan gives a glimpse of the dynamics behind the revolt.

Dunnigan was raised in a home at 18th Avenue and Vicente Street that his parents bought in 1948 for $13,000. His father and his friend Bill were a "couple of ordinary San Francisco guys" from the Sunset, GIs who came home in 1946, married their sweethearts and started raising families.

"By 1955, they were in their early forties, living across the street from each other, and their idea of relaxation after a long day was sitting at home in a comfortable armchair after dinner with the evening newspaper, watching John Cameron Swayze on their new RCA television sets," Dunnigan writes.

Yet these two ordinary guys from the avenues were among hundreds of people who turned out one night at a public meeting at Lincoln High School to voice their anger at the Western Freeway idea. The man who got them there: their parish priest at St. Cecilia’s, Father Collins.

While Collins and McKeon rallied the grassroots, Supervisor William Blake led the fight from within City Hall. In 1956, the millionaire politician joined McKeon, Collins and members of neighborhood organizations to pressure the Board of Supervisors to pass a resolution condemning the construction of the Western Freeway. Mayor George Christopher vetoed the resolution, but the board’s action strengthened the growing anti-freeway movement.

In 1958, residents of Glen Park joined the Sunset in fighting the freeway plans. They were galvanized into action by a 64-year-old lifelong Glen Park resident named Hermini "Minnie" Straub Baxter.

The previous trivia question: What legendary sports figure worked as a bouncer at a North Beach bar in 1913?

This week's trivia question: What famous architect redesigned the lobby of the Fairmont Hotel?

Every corner in San Francisco has an astonishing story to tell. Gary Kamiya's Portals of the Past tells those lost stories, using a specific location to illuminate San Francisco's extraordinary history - from the days when giant mammoths wandered through what is now North Beach to the Gold Rush delirium, the dot-com madness and beyond. His column appears every other Saturday.

Like what you're reading? Subscribe to the Chronicle Vault newsletter and get classic archive stories in your inbox twice a week.

Born in 1895, the daughter of a well-known local saloon keeper named Augustus Straub, Baxter was appalled when she realized that the Crosstown Freeway would run along Bosworth Street and above Glen Canyon. As noted on the Glen Park history website, Baxter printed up cards that read, "Come and learn how Glen Park District will be destroyed."

About 500 "glum and bitterly protesting" residents attended a meeting at the Glen Park School, which Baxter concluded by saying, "Only God created this beautiful neighborhood in which we live — what man dares destroy it?"

Baxter traveled to Sacramento to speak before the state Assembly and met face to face with the head of San Francisco’s Department of Public Works, who dismissed her concerns by saying, "Someone is always hurt by the construction of a freeway." City Planning Director Jim McCarthy echoed those sentiments, intoning, "Like it or not, the automobile is here to stay. Some of us must pay."

But despite such official support, the tide had turned. In January 1959, the Board of Supervisors voted unanimously to reject seven of the state’s nine proposed freeways, including the ones that would have run through the Sunset and Glen Park. The formerly pro-freeway Examiner summed up the public’s sentiments, editorializing, "The officials at Sacramento ... must be helped to see that this extremely compact city of hills and panoramas possesses values and qualities given to few cities in this world. San Franciscans are neither quixotic nor pointlessly stubborn when they insist these must not be destroyed by surface or elevated freeways. ... The revolt is the day of reckoning for all those who have exalted freeways above other urban values."

The first battle of the Freeway Revolt had been won by the insurgents, but the war was not over. Planners and state highway officials, working with the Board of Supervisors, came up with a revised plan in 1964 that called for a Panhandle Freeway to run through part of Golden Gate Park and a Golden Gate Freeway to run along the northern waterfront, next to the Marina yacht harbor and link up with the Golden Gate Bridge.

By now, however, public opposition to freeways had grown enormously. Thousands of San Franciscans signed petitions; hundreds packed Board of Supervisors meetings. Jean Kortum, whose husband, Karl, had persuaded Chronicle Editor Scott Newhall to come out against the freeways, organized the Freeway Crisis Committee, which unified neighborhood groups.

The reform wing of the state Democratic Party, led by Phillip Burton and his younger brother, John, took on the pro-freeway party establishment, which included San Francisco Mayor John Shelley and Gov. Edmund "Pat" Brown. Haight resident and future Supervisor Sue Bierman fought the Panhandle Freeway out of the campaign office of a young politician named Willie Brown, who won his first Assembly term in 1964 and who pointed out the damage the freeway would do to the largely African American Fillmore neighborhood. Organized labor, which had initially supported freeway construction, now opposed it.

In 1966, the Board of Supervisors voted 6-5 to reject the state plans for the Panhandle and Golden Gate freeways. The federal Bureau of Public Roads withdrew any further funding for interstate highways in San Francisco. The Freeway Revolt had triumphed.

Mayor Shelley was able to joke about the outcome, saying, "There will be a freeway on the moon before we get one in San Francisco." But Gov. Brown did not hide his disappointment, saying, "I can’t think of anything that’s happened in San Francisco or California that I regret more than the failure of the Board of Supervisors to come up with a plan to move traffic in and out of San Francisco."

San Francisco’s Freeway Revolt helped inspire others, including grassroots protests in Boston against the Inner Belt Expressway and New Orleans against the Riverfront Expressway. The days when technocrats could decree urban policies from on high without encountering local resistance were over.

Gary Kamiya is the author of the best-selling book "Cool Gray City of Love: 49 Views of San Francisco," awarded the Northern California Book Award in creative nonfiction. All the material in Portals of the Past is original for The San Francisco Chronicle. To read earlier Portals of the Past, go to sfchronicle.com/portals. For more features from 150 years of The Chronicle’s archives, go to sfchronicle.com/vault. Email: [email protected]

The Chronicle’s flagship news podcast. Listen and subscribe on your favorite app. Click the player below for the latest episode. 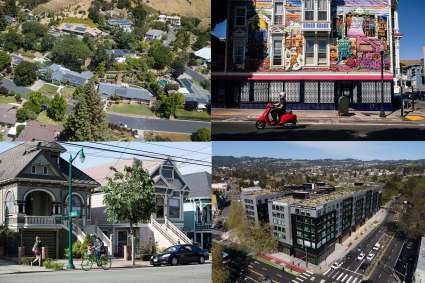 Where to live in the Bay Area
Moving? Our guide lets you search dozens of cities, towns and neighborhoods to find the one that’s right for you.
Written By
Gary Kamiya