Positive Spillovers from the Pandemic

Reflexive contrarians are market makers for ideas: suggest that something is true and they will, helpfully, give you the best possible reason it's false instead. This gets tiresome, but like traditional market making, it adds some value by giving you someone to hash out disagreements with. And, as with market making, it's profitable on average but always carries the risk of being run over.

It's with that dynamic in mind that I've been wondering: what are the positive inflections that will happen due to Covid-19? 2020 was the year of rescaled Y axes, but if we plot things logarithmically, the various trends look a bit like this: 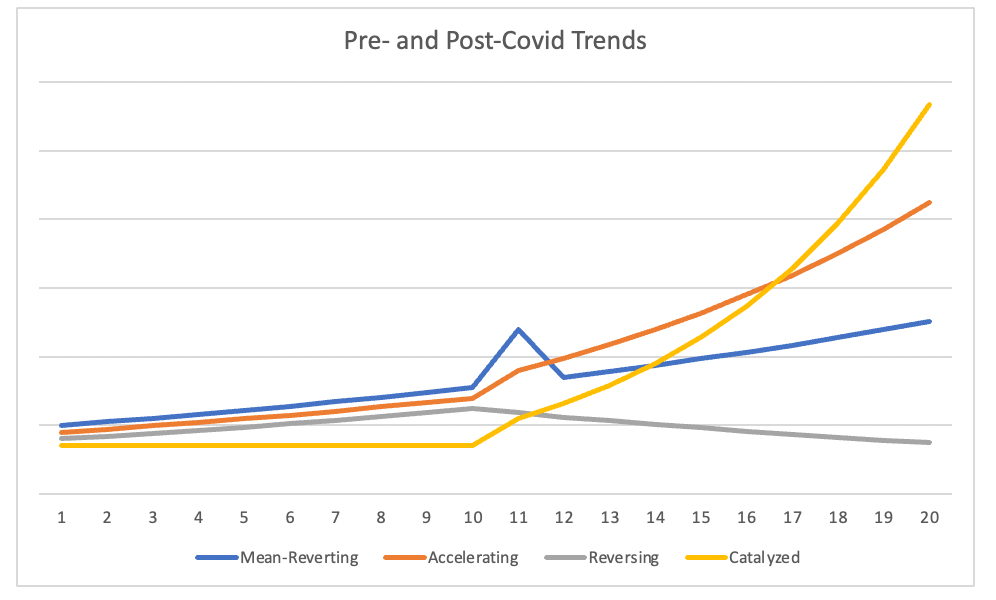 And we can label some of the trends: 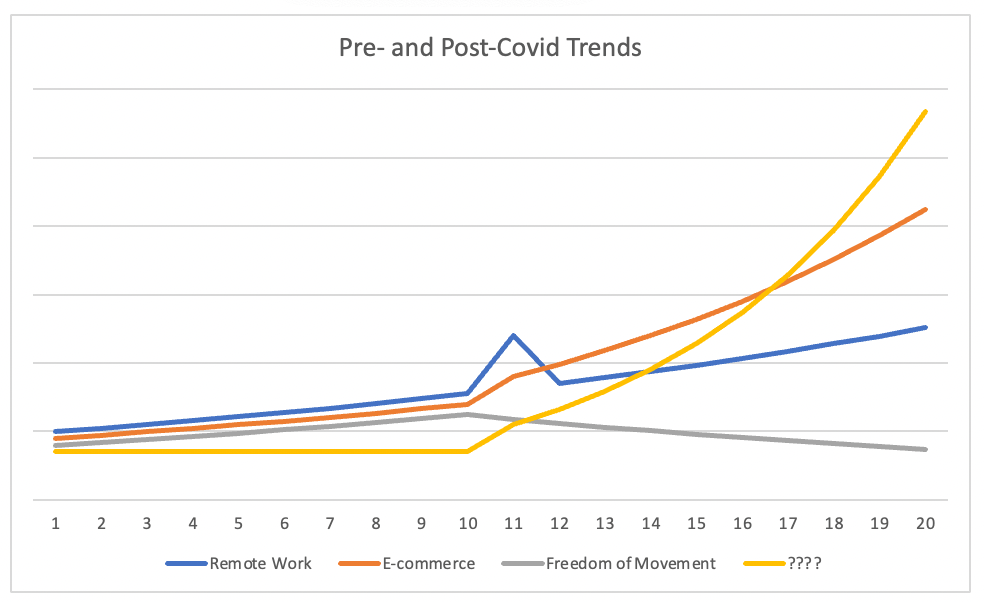 Some of these might be up for debate. Zoom's stock price, for example, implies that remote work has permanently inflected upwards. On the other hand, if we were operating in a maximally remote-friendly economy, the hottest real estate markets in the country would be the cheapest. Not so. They're clusters, just different clusters: Miami, Austin, Denver, and Seattle are cheaper than the Bay and New York (for now). But people are still making the bet that they'd rather be a short drive away from investors, employers, and suppliers, rather than a flight away. And freedom of movement is still a value governments espouse. What's different today is that the places most successful at fighting Covid imposed travel bans early, while the biggest failures imposed them late and haphazardly. E-commerce accelerated, and some of that shift will persist—customers are easier to maintain than they are to acquire, and Amazon, Doordash, and Instacart have more competitive unit cost structures now that they're larger than they were a year ago. But some people will certainly return to stores once they can; the economic impact of cycling lockdowns shows that there's still demand for an in-person shopping experience.

A few trends, though, seem like they've inflected from random to directional due to Covid, and will persist for a long time after. Among them:

A crisis usually leads to some kind of reset. The "great reset" is vague, and the precise versions are too ambitious—outside of Taiwan, New Zealand, and perhaps China and Vietnam, no government got a resounding mandate for reform based on their handling of the pandemic. But a series of smaller resets is likely, and many of them will be unambiguously positive.

[1] The mumps vaccine story displays a certain sense of urgency. One night in 1963, five-year-old Jeryl Lynn Hilleman complained about a sore throat. Her father, who worked for Merck, got some supplies and took a sample to the lab that night.

[2] If everyone's commuting, sick days are discrete. But if people can work from home, they're continuous; if you're tempted to go to work and function at 50% capacity, with a chance of infecting others, a fully functioning home office setup is a good way to turn that into half a sick day and half a work-from-home day.

In an early issue of The Diff, I described the $152bn Chinese conglomerate HNA as a company that "seemed to exist to transform non-RMB cash in the Chinese banking system into assets anywhere else in the world." They started as a small airline, and levered up to acquire a strange collection of businesses—an electronics distributor, a large stake in Hilton, an aircraft leasing company. By early 2018, they were defaulting on loans they took from employees ($, WSJ), always a bad sign. And now, in bankruptcy, they've revealed suspicious cash transfers among subsidiaries ($, Nikkei).

There are basically two nefarious ways to take advantage of preferential access to bank loans:

My assumption had always been that HNA used option one, but their acquisition spree might have been more related to option two. Fortunately for the stability of China's banking system, there seems to be a correlation between a bank a) being required to make politically-favorable loans, and b) getting some form of help from the state when it's in trouble. So HNA doesn't represent a systemic risk, although it does highlight a systemic problem.

Forbes has a detailed profile of Instacart. The most important part is their ad platform. As I've argued before, ads within e-commerce sites are a great way to monetize purchase data. That's a model pursued by companies that have lots of online loyalty data relative to their e-commerce business—but it also works for companies that have visibility into the customer's entire shopping cart, but are only paid to handle the last mile between the grocery store and the home. This is a more significant move than it seems: since grocery stores are low-margin and fees for shelf placement are close to pure profit, the grocery store model ultimately depends on in-store product placement to drive its economics. If Instacart can capture that, and do it more efficiently, they convert grocery stores into fulfillment centers, and capture the surplus themselves.

Like the pandemic, the GameStop story is still happening, but commentary on what's happening now has been more or less exhausted, so most of the discussion centers around second-order effects.

Telegram as a News Source

A Russian billionaire has claimed that he, not Putin, is the owner of the palace Alexei Navalny produced a documentary on a few weeks ago. What's notable about this is not that an oligarch would back up Putin's story, but the medium: "The businessman gave a short interview to Telegram channel Mash... The Telegram channel is a popular news outlet in Russia, boasting almost a million subscribers." As I wrote last week, messaging platforms are values-neutral: if they're a good venue for coordinating resistance to a corrupt regime, they're also a good way for the same regime to push its propaganda to a wider audience.

First-past-the-post voting makes wobbly centrists the most powerful people in the world. During an election year, that means low-information voters in a small number of states; at other times, it means idiosyncratic legislators. This makes Joe Manchin one of the most important politicians in the US.

While it wasn't the intent of the US constitution to create this exact kind of randomness, it does have a perk: a closely-divided legislature with one likely swing vote is a legislature that focuses on that person's pet issues. It injects a bit more noise into a system that's otherwise subject to stasis.