Europe Failed Miserably With Vaccines. Of Course It Did. 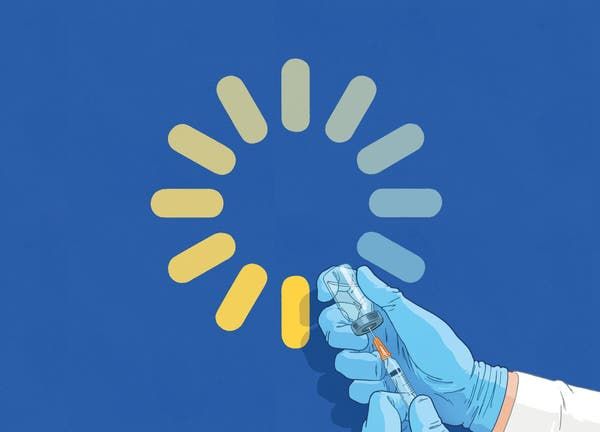 Mr. Bickerton is a lecturer at Cambridge University who focuses on international relations, comparative politics and Europe. The author of "The European Union: A Citizen’s Guide," he is currently writing a history of Europe since 1989.

When the pandemic reached Europe in the early months of 2020, it was every country for itself. France, Germany, Poland and the Czech Republic rapidly introduced export bans on medical equipment. Italy, where the outbreak was most devastating, was forced to rely on supplies from China. Borders closed one after another.

That was not how the European Union was supposed to work. Dry, legalistic and technocratic, the union is not meant to be about politics at all — it’s supposed to be about competent policymaking, conducted above the narrow interests of national states. After the disarray of the first few months, the E.U. formulated plans for a continentwide Covid-19 vaccine strategy. If the initial response to the pandemic had been chaotic and partial, the route out would be coordinated and comprehensive.

It didn’t work out that way. By the third week of May, the United States and Britain had administered over 80 doses per 100 inhabitants; the E.U. had managed 43.6 doses per 100 residents. Slow to start, subject to shortages in supply and in some cases poorly targeted, the continent’s vaccine rollout has been disastrous. The result has been a long and drawn-out third wave of the virus, leading to lockdowns, economic contraction and many deaths.

For the E.U.’s supporters, the failure has been exceptional. Many, such as the bloc’s health commissioner, Stella Kyriakides, blame AstraZeneca, the Anglo-Swedish company whose jab has been held up by supply problems. (The E.U. itself has filed two lawsuits against AstraZeneca for alleged breach of contract.) But the truth is very different: The E.U., from agriculture to its single currency, does not specialize in policy success. In fact, a certain kind of failure is baked into its institutional DNA. The vaccine debacle is only the most recent and devastating example.

Sixteen years ago, Giandomenico Majone, an Italian professor of political science, made an astute observation: In the European Union, he wrote, the ends and the means of policymaking are reversed. In national states, the ends are the policies themselves, from raising wages for workers to reducing regional inequalities and attracting foreign investment. Governments pursue these ends, using the means at their disposal, because they have won elections on the promise to do so.

By contrast, voters in the E.U. have little direct say on the legislative direction of the bloc. As a result, policies become the means of accomplishing quite different ends. For example, the union’s common agricultural policy, introduced in 1962, used farming to demonstrate the feasibility of federal-style policymaking, in the hope it would lead to more. The vaccination program was no different. It was never just about getting shots into people’s arms.

So what was it about? One goal, clearly, was to increase the power of E.U. institutions — notably the European Commission, led by Ursula von der Leyen. By centralizing vaccine procurement in its hands, it sought greater control over the bloc’s health policy. Such transfers of responsibility are rarely reversed, even if the policies themselves are a failure. This is what Professor Majone called "integration by stealth."

A centralized vaccine strategy would also, leaders suggested, give meaning to an E.U. struggling to find its place in a challenging geopolitical environment, demonstrating the bloc’s capacity to unite. Yet the attempt amounted to an enormous institutional experiment conducted amid a global health crisis. It was a breathtakingly reckless gamble that didn’t come off.

Then there were the member states themselves, for which a continentwide vaccine strategy satisfied their own, often different, objectives. For Germany, it was an opportunity to repair the damage caused by its heavily criticized refusal to help other member states during the first wave. For France, it gave President Emmanuel Macron a chance to pursue his global campaign against populist nationalism, positioning the E.U. as a model for a more transnational form of solidarity, as well to promote France’s domestic pharmaceutical industry. (One of the earliest contracts for jabs signed by the E.U. was with Sanofi, a French company whose vaccine development was very far behind its competitors.)

The Case of the Disappearing Cicadas

‘I Should Have Known Better’: Travel Planning in Uncertain Times

The Re-Re-Rebirth of Jean Smart

Smaller member states had more modest ambitions. They hoped that a collective strategy would ensure access to vaccine supplies that might otherwise be commandeered by the bloc’s bigger member states.

It was also supposed to address the relatively widespread anti-vaccine sentiment across Europe, popularized by the likes of the Five Star Movement and the League party in Italy. A 2018 study, for example, found that 59 percent of Western Europeans — and just 40 percent of Eastern Europeans — thought vaccines were safe, compared with a global average of 79 percent. By negotiating hard with vaccine producers, and by deploying the full firepower of the single market, European leaders wanted to show that it was they — not the pharmaceutical industry — that called the shots.

Faced with these pressures, the commission was very cautious in its approach, setting out to secure vaccines for a population of just under 448 million people with a total of 2.7 billion euros, or around $3.25 billion. By contrast Britain spent €4.3 billion, or $5.2 billion, to vaccinate a population of just over 66 million. On its own terms, the E.U.’s negotiations were successful: The E.U. paid substantially less than the United States for its doses of Pfizer and AstraZeneca.

But frugality came at a price. When vaccine producers hit problems, Europe quickly found itself at the back of the line — while Israel, the United States and Britain, which had spent much more per capita on vaccines, enjoyed successful rollouts. Penny-pinching was a false economy: It delayed the rollout, allowing the virus to spread further and requiring more restrictions. The final cost, in human and economic terms, is hard to measure.

Few expected the vaccination campaign to go so badly. But we shouldn’t be so surprised. After all, the same dynamics lay behind other policy failures. Take the introduction of the common currency in 1999. Justified in the language of economic growth, the policy was in fact the means to achieve a variety of political ends — locking a reunified Germany into a new set of pan-European rules and weakening the power of organized labor among them. The result, as some national economies prospered while others suffered long-term stagnation, has been to severely destabilize the bloc.

Europe’s vaccine program may finally be starting to catch up. But its failures, so damaging to the bloc’s image, have their roots in the institutional structure of the E.U. itself. Until European leaders stop treating policies as an opportunity for pursuing other — often unrelated — goals, we can expect Europe to fail, and fail again.

Chris Bickerton (@cjbickerton) is a lecturer in politics at Cambridge University and the author of "The European Union: A Citizen’s Guide."

The Times is committed to publishing a diversity of letters to the editor. We’d like to hear what you think about this or any of our articles. Here are some tips. And here’s our email: [email protected].

We hope you enjoyed this free article.

Suggested newsletters for you

Make sense of the day’s news and ideas. David Leonhardt and Times journalists guide you through what’s happening — and why it matters.

Alerts when important news breaks around the world.

The sharpest arguments on the most pressing issues of the week.

Why I Am Not Vaccinated

The Spectacle of the G.O.P.’s Shrinking Tent

May 18
Continue reading the main story

Why So Many People Are Resisting Vaccination

The Hoover Dam Made Life in the West Possible. Or So We Thought.

She Wanted a Post-Retirement Manhattan Pad for Under $900,000. Which Option Would You Choose?

A New $260 Million Park Floats on the Hudson. It’s a Charmer.

A Wedding in Hawaii for Sade’s Son

Opinion: The Free Ride May Soon Be Over for Anti-Abortion Politicians

When No Landlord Will Rent to You, Where Do You Go?