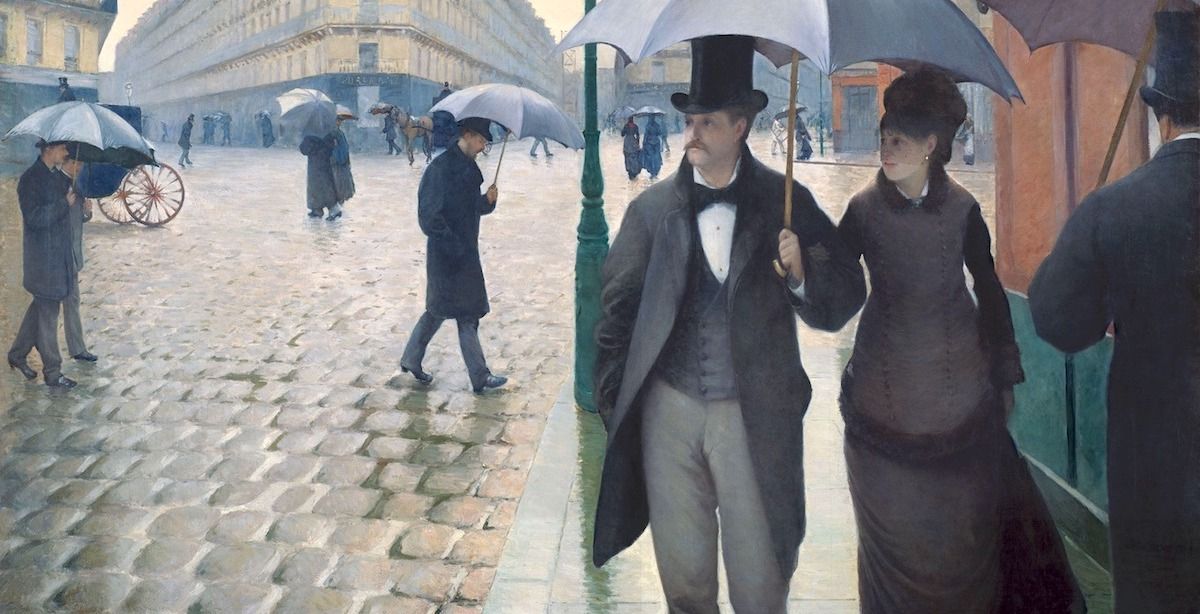 On the Link Between Great Thinking and Obsessive Walking

From Charles Darwin to Toni Morrison, Jeremy DeSilva Looks at Our Need to Move

Moreover, you must walk like a camel, which is said to be the only beast which ruminates when walking. –Henry David Thoreau, "Walking," 1861 *

Charles Darwin was an introvert. Granted, he spent almost five years traveling the world on the Beagle recording observations that produced some of the most important scientific insights ever made. But he was in his twenties then, embarking on a privileged, 19th-century naturalist’s version of backpacking around Europe during a gap year. After returning home in 1836, he never again stepped foot outside the British Isles.

He avoided conferences, parties, and large gatherings. They made him anxious and exacerbated an illness that plagued much of his adult life. Instead, he passed his days at Down House, his quiet home almost twenty miles southeast of London, doing most of his writing in the study. He occasionally entertained a visitor or two but preferred to correspond with the world by letter. He installed a mirror in his study so he could glance up from his work to see the mailman coming up the road—the 19th-century version of hitting the refresh button on email.

Darwin’s best thinking, however, was not done in his study. It was done outside, on a lowercase d–shaped path on the edge of his property. Darwin called it the Sandwalk. Today, it is known as Darwin’s thinking path. Janet Browne, author of a two-volume biography of Darwin, wrote:

As a businesslike man, he would pile up a mound of flints at the turn of the path and knock one away every time he passed to ensure he made a predetermined number of circuits without having to interrupt his train of thought. Five turns around the path amounted to half a mile or so. The Sandwalk was where he pondered. In this soothing routine, a sense of place became preeminent in Darwin’s science. It shaped his identity as a thinker.

Darwin circled the Sandwalk as he developed his theory of evolution by means of natural selection. He walked to ponder the mechanism of movement in climbing plants and to imagine what wonders pollinated the fantastically shaped and colorful orchids he described. He walked as he developed his theory of sexual selection and as he accumulated the evidence for human ancestry. His final walks were done with his wife Emma as he thought about earthworms and their role in gradually remodeling the soil.

In February 2019, I had the meta-experience of walking Darwin’s thinking path to think about how walking helps you think. It was school vacation in London, and I had to compete with families arriving in droves to see where Darwin had lived and worked. The desk in his study is still cluttered with books, letters, and small specimen boxes containing pinned insects. Hanging from a nearby chair is his black jacket, black bowler hat, and a wooden walking stick. The stick has a helical design like a crawling tendril and looks freshly polished. The bottom of the walking stick, however, is well worn—evidence of miles on the Sandwalk.

Darwin’s best thinking was not done in his study. It was done outside, on a lowercase d–shaped path on the edge of his property.

I walked out the back kitchen of the cream-colored home, passed the green trellis and vine-covered columns holding up Darwin’s back porch, crossed the beautifully groomed garden, and entered the Sandwalk. I was alone. The day was cool and blustery. Gray clouds hung low on the horizon and moved swiftly overhead, dropping an intermittent drizzle. Occasional breaks in the clouds allowed the sun to peek through, making the raindrops flicker.

I could hear planes from the nearby London Biggin Hill Airport and the hum of a lorry traveling along A233. But those modern sounds were fleeting. It was easy to imagine that it was 1871 and that I was taking a walk with Darwin himself. I could hear the chatter of gray squirrels but tuned them out as well since they are an invasive North American species introduced into England in 1876.

I stacked five flat flints at the entrance for the five laps I would take and began my walk, first along the meadow and then counterclockwise into the woods. The Sandwalk is alive. Starlings and crows fly overhead, filling the air with their trills and gurgles. Ivy inches up the thick trunks of alder and oak trees toward the sunlight. Underfoot, fungi decompose wet leaves, emitting the smell of fresh earth. I picked up a clump of cockleburs just off the path, and their hooks pulled on the folds of my hand and latched to my jacket. With each step the gravel crunched, and my shoes occasionally slipped on damp stones made smooth by thousands of footsteps, including some taken by Darwin himself.

Down House is not a place of magic, nor is it a place of worship. Looping the Sandwalk one flint at a time did not endow me with the wisdom to continue my scientific pursuits. It turns out, any walk outdoors has the potential to unlock our brains. The Sandwalk just happened to be where the unlocking of one 19th-century brain helped change the world and our place in it.

But why? Why does walking help us think?

You are undoubtedly familiar with this situation: You’re struggling with a problem—a tough work or school assignment, a complicated relationship, the prospects of a career change—and you cannot figure out what to do. So you decide to take a walk, and somewhere along that trek, the answer comes to you.

The nineteenth-century English poet William Wordsworth is said to have walked 180,000 miles in his life. Surely on one of those walks he discovered his dancing daffodils. French philosopher JeanJacques Rousseau once said, "There is something about walking which stimulates and enlivens my thoughts. When I stay in one place I can hardly think at all; my body has to be on the move to set my mind going."

Ralph Waldo Emerson’s and Henry David Thoreau’s walks in the New England woods inspired their writing, including "Walking," Thoreau’s treatise on the subject. John Muir, Jonathan Swift, Immanuel Kant, Beethoven, and Friedrich Nietzsche were obsessive walkers. Nietzsche, who walked with his notebook every day between 11 am and 1 pm, said, "All truly great thoughts are conceived by walking." Charles Dickens preferred to take long walks though London at night. "The road was so lonely in the night, that I fell asleep to the monotonous sound of my own feet, doing their regular four miles an hour," Dickens wrote. "Mile after mile I walked, without the slightest sense of exertion, dozing heavily and dreaming constantly." More recently, walks became an important part of the creative process of Apple cofounder Steve Jobs.

It turns out, any walk outdoors has the potential to unlock our brains.

It is important to pause and reflect on these famous walkers. They are all guys. Little has been written about famous women who regularly walked. Virginia Woolf is one exception. She apparently walked quite a bit. More recently, Robyn Davidson trekked with her dog and four camels across Australia and wrote about it in her book Tracks. In 1999, Dorris Haddock, an 89-year-old grandmother from Dublin, New Hampshire, walked 3,200 miles from coast to coast to protest United States campaign finance laws.

Historically, however, walking has been the privilege of white men. Black men were likely to be arrested, or worse. Women just out for a walk were harassed, or worse. And, of course, rarely in our evolutionary history was it safe for anyone to walk alone.

Perhaps it is a coincidence that so many great thinkers were obsessive walkers. There could be just as many brilliant thinkers who never walked. Did William Shakespeare, Jane Austen, or Toni Morrison walk every day? What about Frederick Douglass, Marie Curie, or Isaac Newton? Surely the astoundingly brilliant Stephen Hawking did not walk after ALS paralyzed him. So walking is not essential to thinking, but it certainly helps.

Marilyn Oppezzo, a Stanford University psychologist, used to walk around campus with her Ph.D. advisor to discuss lab results and brainstorm new projects. One day they came up with an experiment to look at the effects of walking on creative thinking. Was there something to the age-old idea that walking and thinking are linked?

Oppezzo designed an elegant experiment. A group of Stanford students were asked to list as many creative uses for common objects as they could. A Frisbee, for example, can be used as a dog toy, but it can also be used as a hat, a plate, a bird bath, or a small shovel. The more novel uses a student listed, the higher the creativity score. Half the students sat for an hour before they were given their test. The others walked on a treadmill.

The results were staggering. Creativity scores improved by 60 percent after a walk.

A few years earlier, Michelle Voss, a University of Iowa psychology professor, studied the effects of walking on brain connectivity. She recruited 65 couch-potato volunteers aged 55 to 80 and imaged their brains in an MRI machine. For the next year, half of her volunteers took 40-minute walks three times a week. The other participants kept spending their days watching Golden Girls reruns (no judgment here; I love Dorothy and Blanche) and only participated in stretching exercises as a control. After a year, Voss put everyone back in the MRI machine and imaged their brains again. Not much had happened to the control group, but the walkers had significantly improved connectivity in regions of the brain understood to play an important role in our ability to think creatively.

Walking changes our brains, and it impacts not only creativity, but also memory.

In 2004, Jennifer Weuve of Boston University’s School of Public Health studied the relationship between walking and cognitive decline in 18,766 women aged 70 to 81. Her team asked them to name as many animals as they could in one minute. Those who walked regularly recalled more penguins, pandas, and pangolins than the women who were less mobile. Weuve then read a series of numbers and asked the women to repeat them in reverse order. Those who walked regularly performed the task much better than those who didn’t. Even walking as little as 90 minutes per week, Weuve found, reduced the rate at which cognition declined over time. Therefore, because cognitive decline is what occurs in the earliest stages of dementia, walking might ward off that neurodegenerative condition.

But correlation does not equal causation. Otherwise, one could interpret graveyards as places where giant stones fall from the sky and kill unsuspecting, mostly elderly, people. Perhaps the arrow of causality was pointing in the wrong direction. Maybe mentally active people were simply more likely to go for a walk. Researchers had to dive deeper. 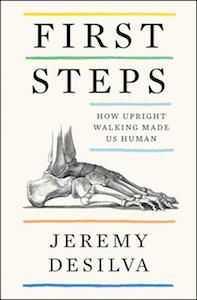 Jeremy DeSilva is an anthropologist at Dartmouth College. He is part of the research team that discovered and described two ancient members of the human family tree—Australopithecus sediba and Homo naledi. He has studied wild chimpanzees in Western Uganda and early human fossils in museums throughout Eastern and South Africa. From 1998 to 2003, he worked as an educator at the Boston Museum of Science. He continues to be passionate about science education and travels throughout New England, giving lectures on human evolution. He and his wife, Erin, live in Norwich, Vermont, with their twins, Ben and Josie.

On the Meeting Place of Scientific Knowledge and Indigenous Ways of Knowing

Your Week in Virtual Book Events, April 19th to April 25th

Join the discussion…
© LitHub
Back to top