More Americans now say they prefer a community with big houses, even if local amenities are farther away 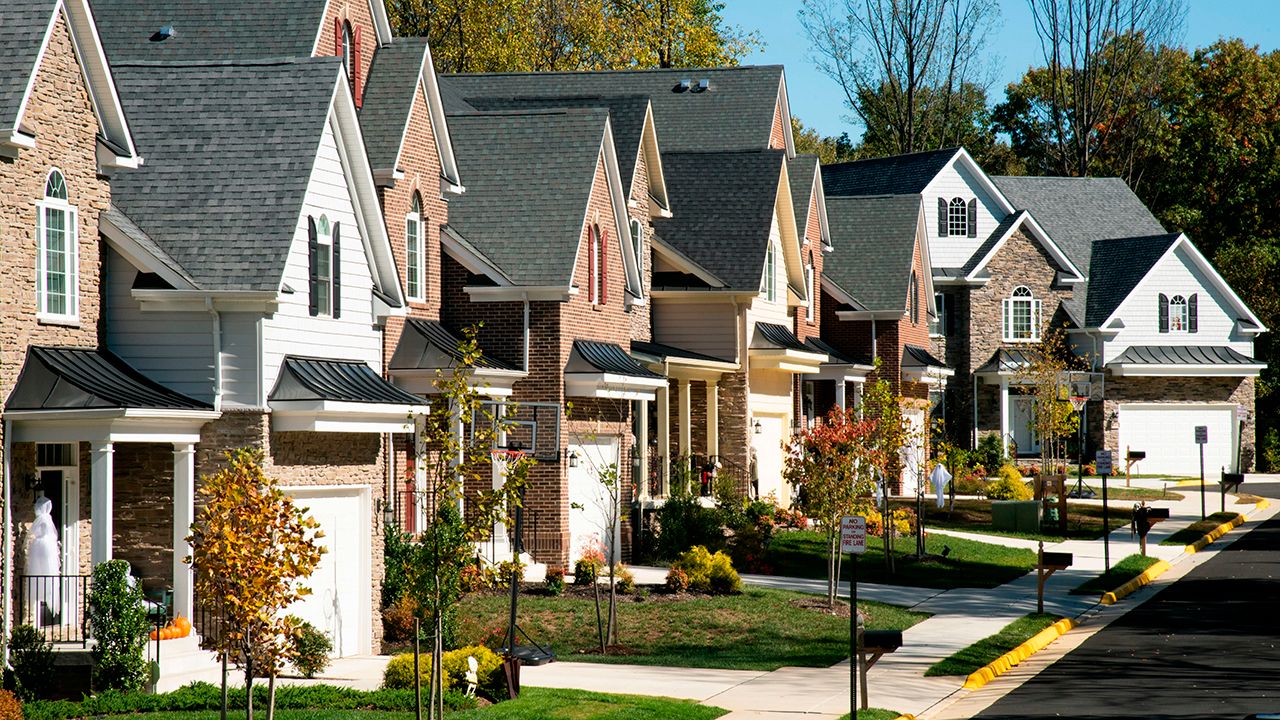 Americans today are more likely than they were in the fall of 2019 to express a preference for living in a community where "houses are larger and farther apart, but schools, stores and restaurants are several miles away," according to a Pew Research Center survey conducted July 8-18, 2021. 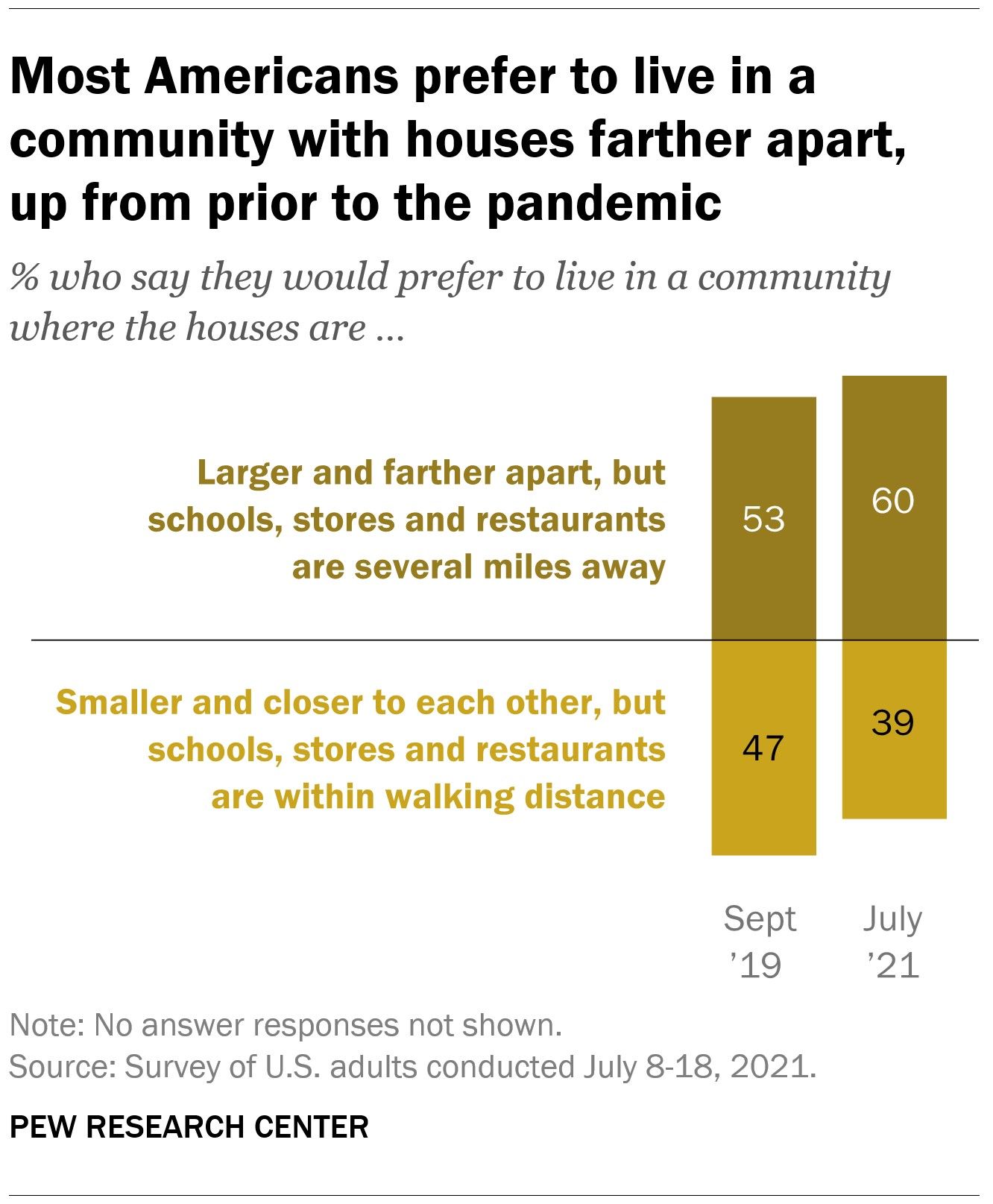 There has been a corresponding drop in the share saying they would prefer to live somewhere with smaller houses that are "closer to each other, but schools, stores and restaurants are within walking distance."

This shift has occurred during the coronavirus outbreak and the accompanying period of telework, remote schooling and pandemic-related restrictions on indoor dining and other indoor activities. Today, six-in-ten U.S. adults say they would prefer to live in a community with larger homes with greater distances to retail stores and schools (up 7 percentage points since 2019), while 39% say they prefer a community with smaller houses that are closer together with schools, stores and restaurants within walking distance (down 8 points since 2019).

Preferences for communities where houses are larger and farther from retail shops, dining and schools has increased across partisan, age, educational and racial and ethnic groups. 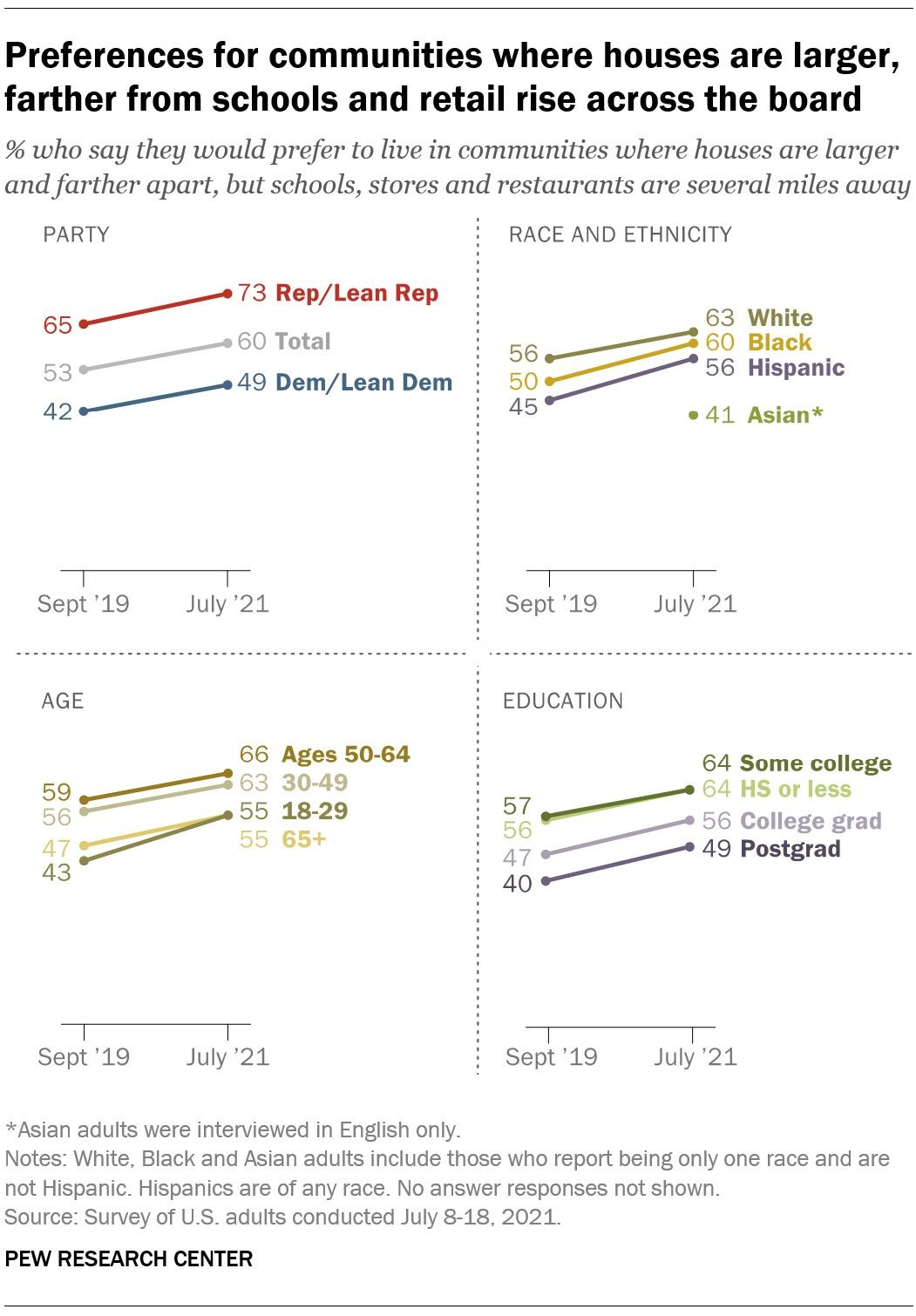 As in the past, Republicans and Republican-leaning independents are more likely than Democrats and Democratic leaners to say they want to live in a community with larger houses even if there are greater distances to schools, shops and restaurants. Today, 73% of Republicans say this, up from 65% in September 2019. About half of Democrats (49%) now say they would prefer to live in a more widely spaced community, up from 42%. In 2019, a 58% majority of Democrats expressed a preference for communities with smaller houses and greater proximity to schools and amenities.

While communities with larger houses have generally become more appealing to Americans over the past two years, preferences continue to vary among demographic groups.

While majorities of those in all age groups express a preference for communities that are more widely spaced, those between the ages of 30 and 64 (64%) are more likely than either those under 30 (55%) or those ages 65 and older (55%) to say this.

About three-quarters of conservative Republicans (77%) say they prefer communities with larger houses, as do 67% of moderate and liberal Republicans. A narrower majority of conservative and moderate Democrats also say they prefer larger houses, even if farther from schools, stores and restaurants (55%). By comparison, nearly six-in-ten liberal Democrats (57%) express a preference for smaller houses in places where they could walk to schools, stores and restaurants.

Among urban, suburban and rural residents, Republicans are much more likely than Democrats to say they want to live in communities where houses are larger and more spread apart. 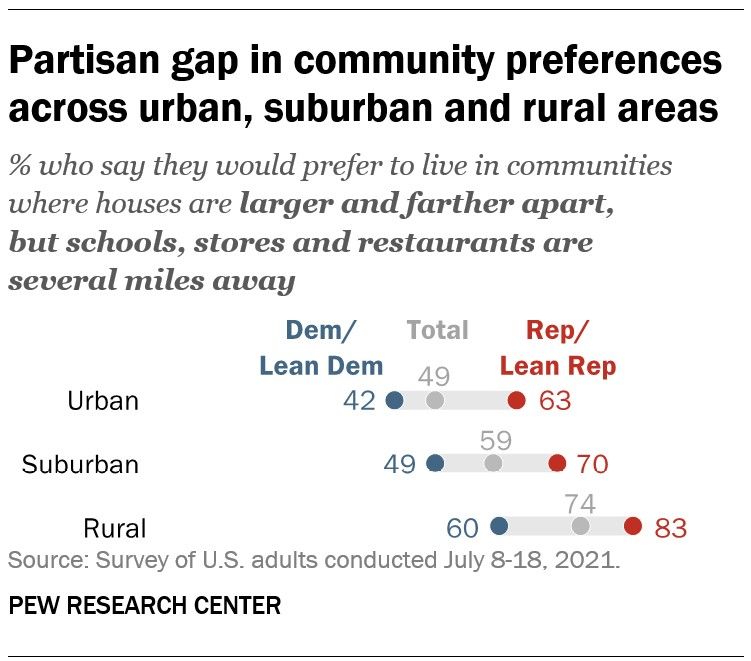 While about eight-in-ten rural Republicans (83%) say they prefer more spread out communities, a narrower majority of rural Democrats (60%) say the same. Among those who live in urban communities, 63% of Republicans say they would prefer to live somewhere where homes are large, far apart and require driving to other parts of the community; a smaller share of Democrats (42%) express this preference.

Note: Here are the questions used for the report, along with responses, and its methodology.

1
India’s Sex Ratio at Birth Begins To Normalize
2
Two Decades Later, the Enduring Legacy of 9/11
3
Are you in the American middle class? Find out with our income calculator
4
Key findings about U.S. immigrants
5
Political Typology Quiz

About Pew Research Center Pew Research Center is a nonpartisan fact tank that informs the public about the issues, attitudes and trends shaping the world. It conducts public opinion polling, demographic research, media content analysis and other empirical social science research. Pew Research Center does not take policy positions. It is a subsidiary of The Pew Charitable Trusts.