Miami’s mayor had no symptoms. So why did he get tested?

Like NBA players and entertainers, elected and appointed leaders in Miami have formed their own subset of prominent people with COVID-19 scares who managed to secure quick test results. 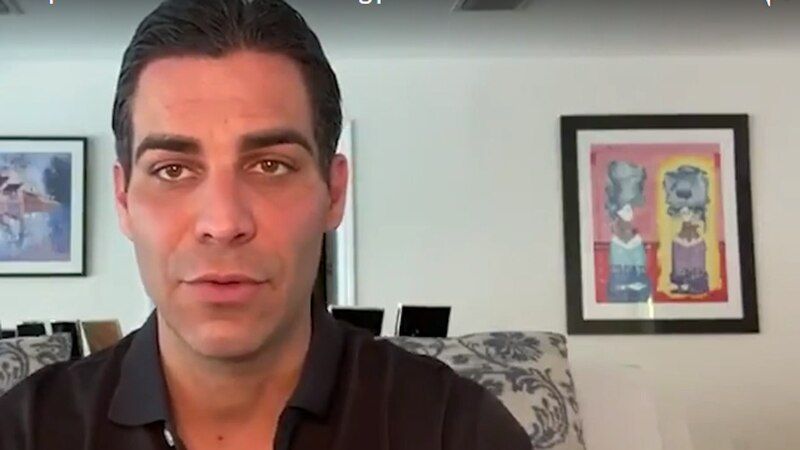 Stories about the coronavirus pandemic are free to read as a public service at tampabay.com/coronavirus. Sign up for our DayStarter newsletter to receive updates weekday mornings. If this coverage is important to you, consider supporting local journalism by subscribing to the Tampa Bay Times at tampabay.com/subscribe.

MIAMI — Miami Mayor Francis Suarez has become a national face of everyday life with coronavirus, telling national interviewers he came down with COVID-19 despite not suffering any symptoms.

Which raises the question: How did the mayor of Miami manage to get a COVID-19 test without suffering any symptoms?

Like NBA players and entertainers, elected and appointed leaders in Miami have formed their own subset of prominent people with COVID-19 scares who managed to secure quick test results in the midst of statewide rationing of lab materials needed to detect the deadly virus.

In Miami, not only did Suarez secure state-processed lab results through a test administered by the city. He said dozens of people tied to city government were tested too in a blitz that, according to public statements, included the wives of some Miami commissioners.

"About 40-plus people of our government have been tested, that have been in close proximity or in contact with me," Suarez said during a video diary March 16 as he chronicles his time in self-isolation at home. "I think it’s important to share that news with you. So you have confidence there isn’t a widespread contagion in our government. And that first responders who come to respond to you are not contagious from the fact that I am contagious."

The broad set of speedy results don’t reflect the struggles most people have encountered seeking coronavirus testing across Florida. The latest state figures show fewer than 1,000 tests completed in Miami-Dade, a county with a population of nearly 2.8 million people.

Neena Malik, a Miami psychologist, said occasional chills morphed into coronavirus concerns on St. Patrick’s Day, as her fever crept up and flu-like symptoms mounted. The 53-year-old married mother of a 13-year-old said she’s been in her bedroom since Wednesday morning as she fended off a fever, broke the troubling news of her symptoms to clients and slowly gave up on trying to get herself tested.

Malik said her doctor’s office had a nurse read a prepared message that told her to report to an emergency room if her symptoms got worse. "’You will not be tested. There aren’t enough tests," Malik said she was told. A call Friday to a drive-thru testing center brought more bad news. She had the symptoms needed to meet state criteria, but not the history.

"She told me the only people they are testing are the ones who have been personally exposed to someone who has tested positive for COVID-19, plus had symptoms," Malik said. "It’s almost impossible, because almost nobody has been tested." (On Saturday afternoon, Malik had an encouraging update. She tried again, and wound up seeing a doctor online through the Baptist system. The physician agreed to a test and now Malik said she has to wait for the results. "They said I should hear from the CDC on 6 to 7 days," she said.)

none
none
noneWe'll deliver today's top headlines and information to your inbox for free every weekday morning.none
none nonenone

While state guidelines for COVID-19 tests require contact with a positive case and coronavirus symptoms, Miami confirmed Friday it secured scarce testing for asymptomatic elected officials and administrators based on their government roles.

"The City of Miami, working with the Florida Department of Health, facilitated testing of those internal to our administration that had direct contact with the Mayor as a means to ensure continuity of government and contain any significant spread of the virus," read a statement released Friday.

In the Friday statement, the city said the quick COVID-19 tests were justified to prevent having to consider even more administrators and city employees at risk without knowing whether Suarez’s first wave of contacts had the virus.

"The City of Miami experienced a circumstance that is unprecedented and one which, fortunately, no other municipal government has had to deal with to this point," the statement said. "We stand by the decision, as we have an obligation to our residents and property owners to do all we can to keep our government operating at maximum capacity."

Suarez joined Miami-Dade Mayor Carlos Gimenez for a Miami reception with the president of Brazil on March 9, and both had their COVID-19 results back after entering self-isolation when word spread that an aide to President Jair Bolsonaro contracted the virus.

Like the 42-year-old Suarez, Gimenez, 66, reported no symptoms but quickly secured a COVID-19 test and received negative results within hours from a state lab in Miami. Because Gimenez was negative, administration sources said his top aides weren’t required to be tested and isolated over potential exposure to him. That spared Miami-Dade the kind of isolation sparked by Suarez’s positive test.

Gimenez’s office did not respond to a request for information on how the mayor qualified for a test. But Gimenez, whose position puts him in charge of county police, ambulances and ports, seemed to address it in a Twitter post on March 13. "As the incident commander during this and other emergencies," he wrote, "it would have been irresponsible for me not to get tested immediately."

Testing roadblocks didn’t prevent Suarez’s 70-year-old father, Miami-Dade Commissioner Xavier Suarez, from getting quick results. He described getting tested in the parking lot of a public hospital he helps oversee on the board with control over the tax-funded Jackson Health System.

"Was waiting to [show] results of my CoVid19 until (1) i had good news & (2) the test was available to all Americans," Suarez wrote Friday night, along with a photo of a woman in scrubs, a ventilation mask and face guard holding medical testing material in a parking lot. "My wife & I tested negative! Thanks to Chief JMH emergency nurse Monica Ramage-Suarez, pictured here."

A Jackson spokesman said the hospital network couldn’t comment on circumstances around an individual test, given medical confidentiality rules. Suarez, a former Miami mayor himself who’s now running to succeed a term-limited Gimenez in 2020, said the quick lab test made sense given the public attention given one of the county’s few known COVID-19 cases.

"I assumed as the father of the only identified person in this community of three million people to be infected, and a fairly well known public figure, that testing negative would take pressure off everyone else and reduce community panic and stress," Suarez said in an email response to questions about the test. "I assumed that was the logical priority for testing."

For city officials and others, Miami provided COVID-19 testing March 13 at an outdoor tent assembled by a city training center for firefighters in Coconut Grove. Commissioner Joe Carollo said he was able to go there for a test, as was his wife. Commissioner Manolo Reyes and his wife also received city tests. All came back negative.

Miami’s statement didn’t address why relatives of commissioners were offered tests, but Carollo said it made sense to quickly get a sense of the exposure from COVID-19 at City Hall.

"This is probably the only city government in America where all your top people were exposed," Carollo said. "If all of us are knocked out, it becomes pretty hard to run the city of Miami."

EVENT CANCELLATIONS: Get the latest updates on events planned in the Tampa Bay area in the coming weeks.

BE PREPARED: Guidelines for essentials to keep in your home should you have to stay inside.

STOCK UP YOUR PANTRY: Foods that should always be in your kitchen, for emergencies and everyday life.

JOIN THE FACEBOOK GROUP: See updates and tips posts, and ask questions of our journalists.

LISTEN TO THE CORONAVIRUS PODCAST: New episodes every week, including interviews with experts and reporters

HAVE A TIP?: Send us confidential news tips.

We’re working hard to bring you the latest news on the coronavirus in Florida. This effort takes a lot of resources to gather and update. If you haven’t already subscribed, please consider buying a print or digital subscription.