MeWork | No Mercy / No Malice

I’ve lost a lot of other people’s money. The most stressful times in my life have been when people believed in me and invested tens (if not hundreds) of millions in my company or idea, only to see their capital go up in smoke. I’ve also made a lot of people a lot of money — but only in America would someone with my (lack of) pedigree be given this many swings at the plate.

To be a truly great investor or operator/CEO, you need to be a bit of a sociopath: You have to be able to sleep at night even as you lose other people’s hard-earned money or lay people off. Working with OPM (i.e., Other People’s Money) is often phrased as a positive, but the real luxury is to be in a position to lose your own capital. If things go wrong, it’s a private failure.

The willingness to risk capital on a captain and harpoons (the 19th century whaling sector was proto-venture capital) has always been a key ingredient in the secret sauce of the U.S. economy. But the secret is out. While the U.S. still produces the most unicorns, and the most mega-corporations, China is gaining … fast. Interestingly, despite the rhetoric re China challenging U.S. hegemony, it’s European innovation that has drowned in the rising red tide. But that’s another post.

We should celebrate billion-dollar successes, so long as they come at the risk of failure — the whaling captain and the entrepreneur earn their wealth in part thanks to their willingness to come home empty-handed, or not at all. However, there’s a new class of billionaire in America. Meet the MeWork generation, which makes their fortunes despite returning to harbor with less than they embarked with.

To help identify members of the MeWork generation (they can be any age), we’ve devised two metrics: the Daily Benjamin Burn™ (DBB) and the Earn-to-Burn Ratio™ (EBR). The first is how much money an executive lit on fire per day during their tenure. The second is the percentage of those lost Benjamins they siphoned off for themselves — think of it as a commission on destruction. In an efficient and fair (dangerous word) market, the EBR ratio would be zero. If we can measure someone’s burn in daily stacks of 100-dollar bills, they’ve created no value and should get no compensation. Spoiler: That’s not what happens.

What does the DBB look like in practice? A lot like Quibi. That likely won’t mean anything to you, unless you’re one of the dozens and dozens of people who subscribed to the short-lived short video service. In 2018, Jeffrey Katzenberg and Meg Whitman raised $1.75 billion, launched a bad app with worse content, and shut it down six months later. Roku combed through the rubble and found $100 million, so Jeff and Meg immolated $1.65 billion in 750 days, or $2.2 million per day. If you stacked that $1.65 billion in 100-dollar bills, you’d have a pile over a mile high, about two Burj Khalifas, the world’s tallest building.

Eating My Own Benjamins

In 2008, I raised $600 million from a hedge fund, became the largest shareholder in the New York Times Company, and ran an activist campaign against the Gray Lady. They put me on the Board, where I ranted about the evils of Google, advocated for the divestiture of non-core assets, envisioned sunlit uplands of subscription revenue and … lit Benjamins on fire. During my 24-month tour of duty watching the Great Recession kick ad-supported media in the groin, I managed to turn $600 million into $350 million, for a DBB of about $350,000. The stack of Benjamins I lost would have reached only to the top of 30 Rockefeller Plaza. Only. Jesus … 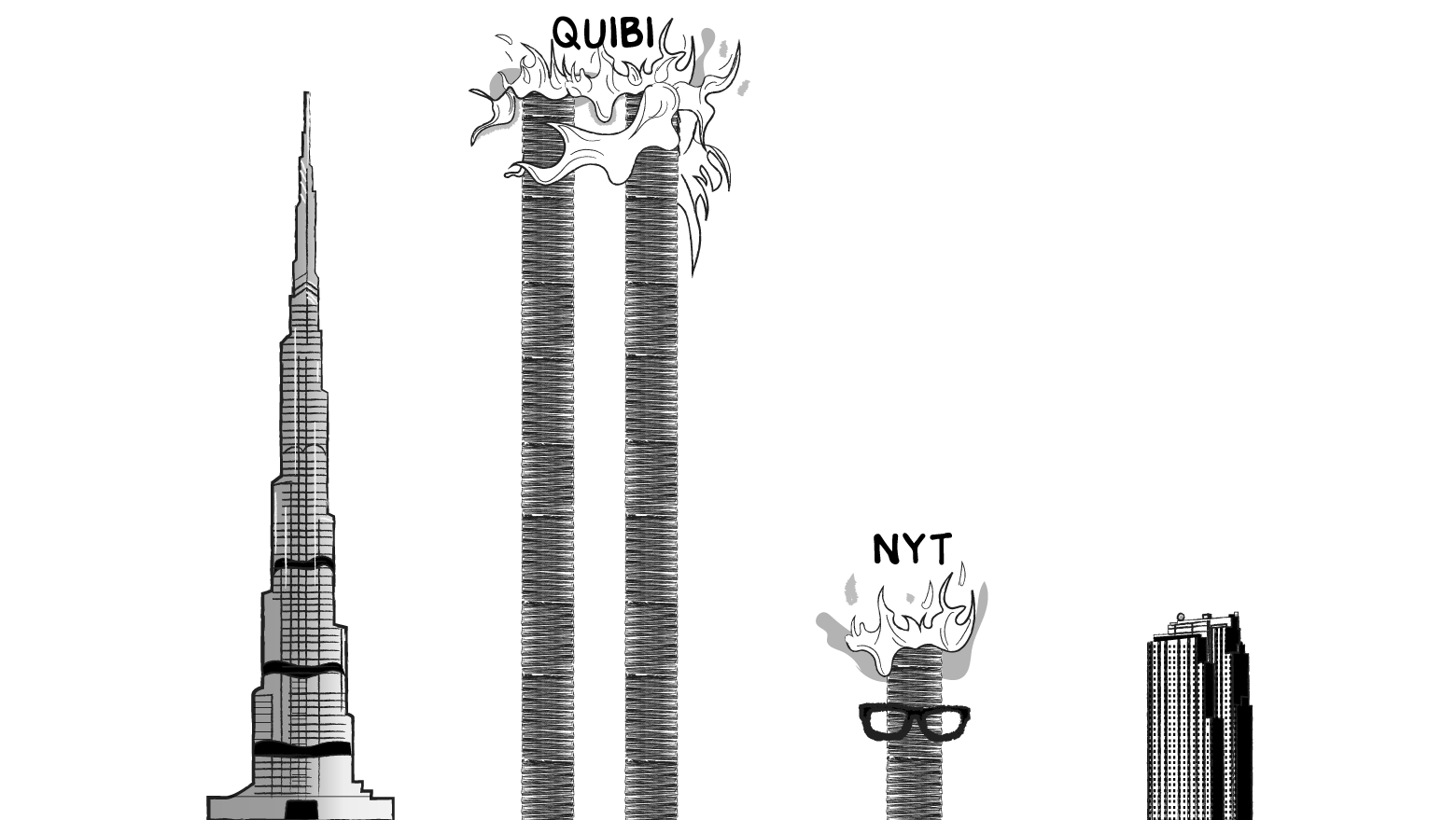 Jeff, Meg, and I all made an old-school mistake. We failed to find a greater fool (e.g., the public markets, gullible board members, Softbank) to secure a mega payout for our Bonfires of the Benjamins. I was paid approximately $500,000 in board fees and a retainer from the fund; I speculate that Jeff and Meg pocketed more (their compensation remains private). But none of us took home millions.

That brings us to the Earn-to-Burn Ratio™ and the Hall of Fame for broken compensation.

When Mayer took over, Yahoo (not including a 20% ownership stake in Alibaba) was valued at $14.4 billion. In July 2016 the company sold itself to Verizon for $4.5 billion, and Mayer was gone. That’s $9.9 billion turned to ash in four years (or 13.5 Burj Khalifas), for a DBB of $6.8 million. Mayer’s compensation began with a $30 million signing bonus and went up from there, totaling an estimated $365 million, giving her a $250,000-per-day commission for destroying $7 million per day of other people’s money. That’s an EBR of 3.7%. Shocking, sure, but not the gold standard.

Adam Neumann founded WeWork in 2010, but he didn’t start burning Benjamins at epic scale until Softbank began shoveling billions into the WeWork furnace in August 2017. By the time Neumann was fired in September 2019, Softbank had invested $10.3 billion; a few months later it wrote off $9.2 billion of that. That’s a $13.1 million DBB on Softbank’s money alone, or like flying a decade-old Gulfstream G450 (I browse planes at night — pathetic) into a mountain … every day. Impressive, but only half the story. Neumann’s compensation for this value destruction was complicated by his ouster and a subsequent lawsuit, but we estimate he made off with around $1.02 billion, most of it coming out of Softbank’s deep pockets. That’s $1.5 million per day during those two years: an EBR of 11.1%. 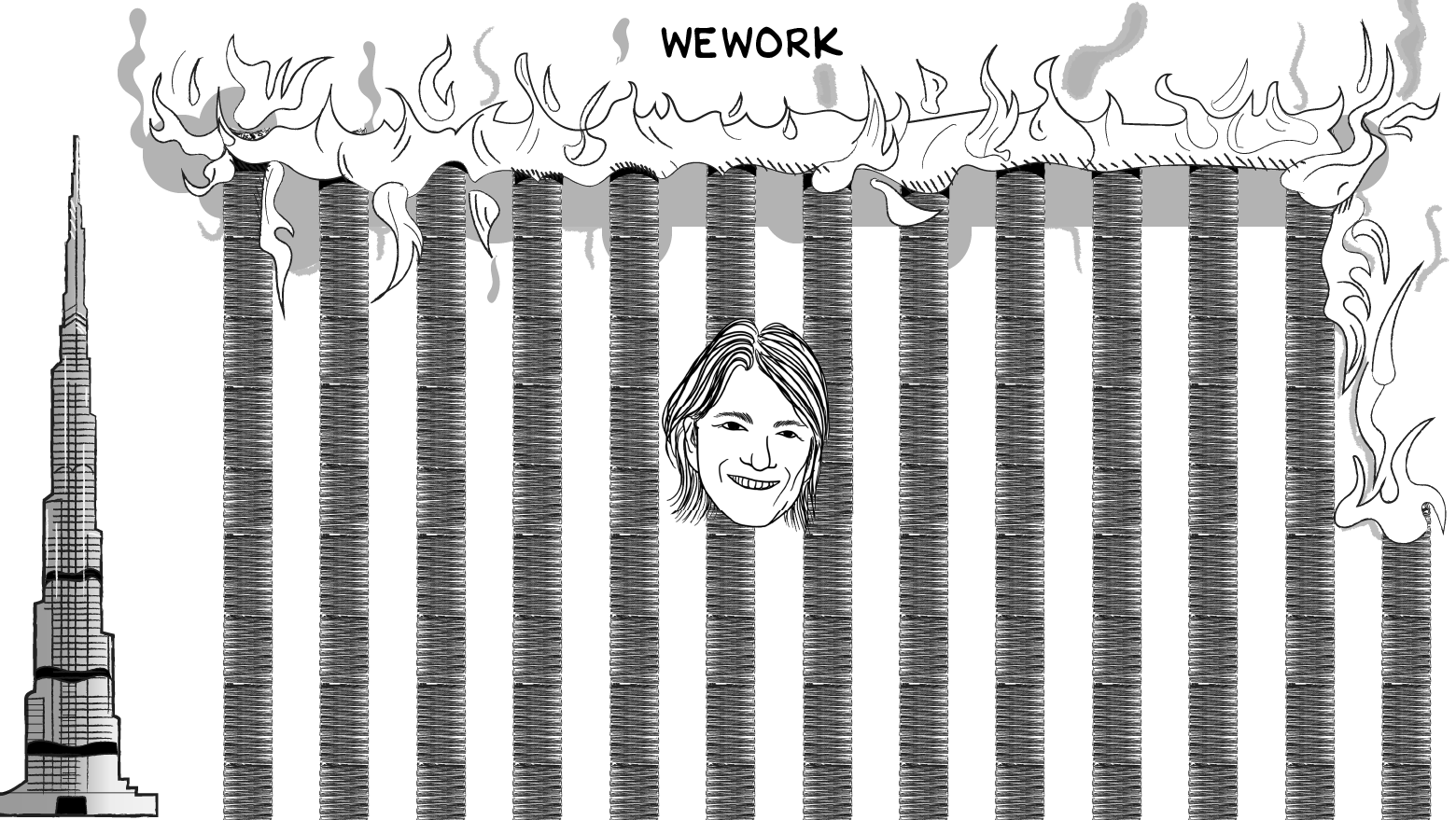 Joining Mayer and Neumann on the podium is Randall Stephenson, who ran AT&T from 2007 to 2020, when his chief lieutenant, John Stankey, took over. If you owned AT&T stock in 2007, you’ve collected $26 per share in dividends since, but you’ve also watched the share price drop from $39 to $29, for an aggregate annual return of 2.5%. This was a period when S&P 500 companies as a whole returned 9.8% a year — much of it on the back of AT&T’s own mobile and data networks — and AT&T’s competitor Verizon returned 7.9% to its shareholders. How did Stephenson manage this? Among other mistakes, AT&T spent $67 billion to buy DirecTV (a pending massive write-off), blew $4 billion when it failed to acquire T-Mobile, and spent another $108 billion to buy WarnerMedia, which Stankey just sold to Discovery. To his (partial) credit, Stankey may have managed to net out the Warner deal as a wash. 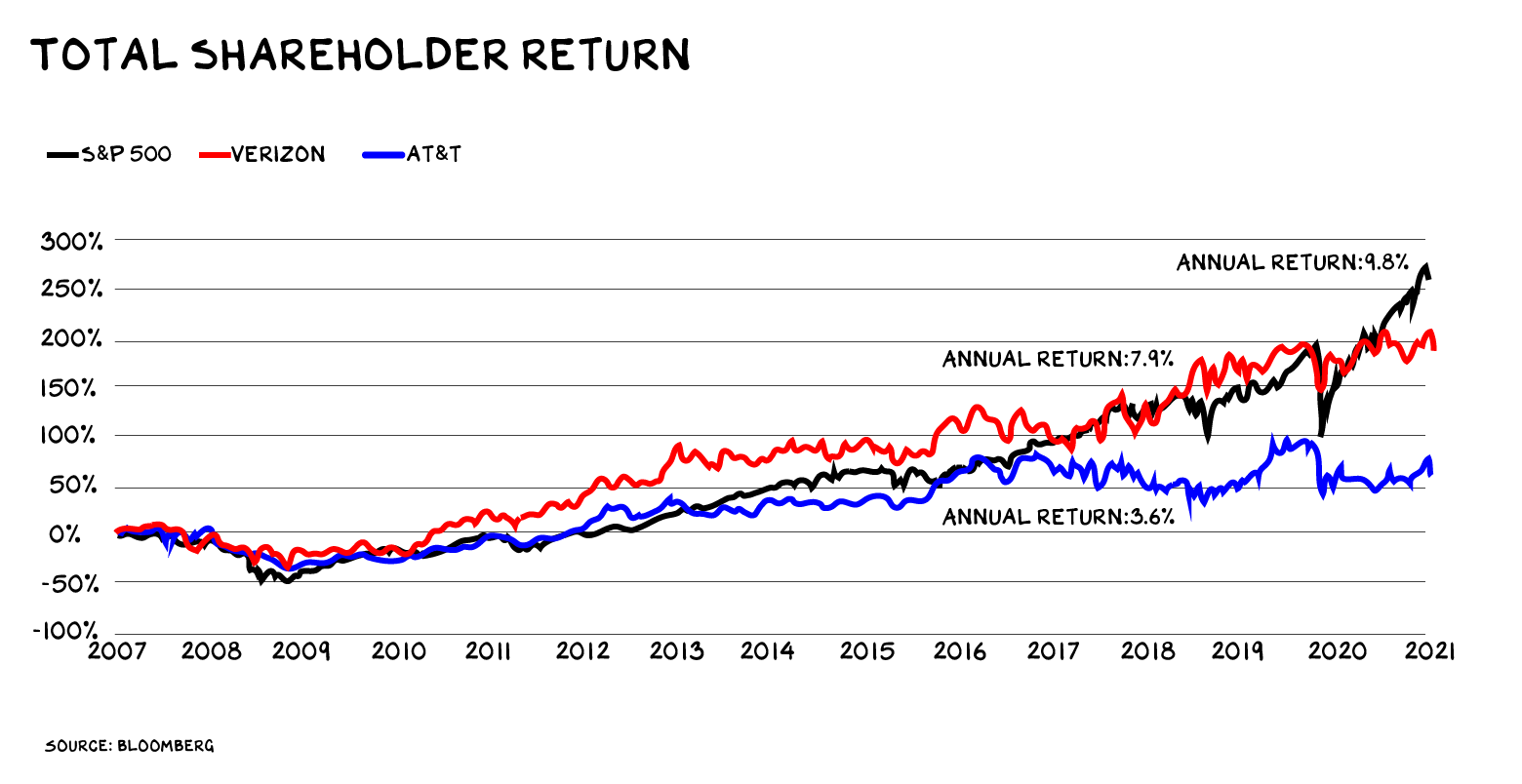 So while Stephenson didn’t destroy capital outright, he was a poor steward. Had AT&T eked out even a 4% return from 2007 to today, it would have made an additional $50 billion for shareholders. That’s an implied DBB of $10 million. How did the Board respond to Stephenson’s 13-year-long sideways run at the iconic firm? His total comp was at least $250 million, including a $64 million pension as a parting gift. That’s an EBR of "only" 0.5%, but still a huge payout in the face of mediocre performance.

In April 2014, toward the end of Steve Ballmer’s controversial run as CEO, Microsoft closed the $7.2 billion purchase of 1999’s leading mobile handset maker, Nokia. Just 15 months later, Ballmer was gone, and the company wrote off $10 billion for the failed acquisition — the deal was so bad it ended up costing Microsoft more than it paid, mostly due to severance for laid-off Nokia employees. That’s an incredible $22.2 million per day, the highest DBB we could find. (Ballmer only made $1.65 million his last year at the company, so a minimal EBR.)

Burning Benjamins doesn’t just happen in the U.S. In 1998, Daimler-Benz acquired Chrysler for $35 billion in the largest industrial merger ever at the time. After nine years of culture clash and billions in losses, Daimler unloaded 80% of Chrysler to a private equity firm for $7.4 billion, valuing the company at $9.25 billion. That equates to an impressive $7.8 million DBB.

How do these corporate money losers compare to the largest and longest-running Ponzi scheme in history? Bernie Madoff ran his fake fund for nearly 30 years, costing investors an estimated $19 billion. The date his fraud began is disputed, but assuming it was 1980, that’s a DBB of just under $2 million per day. A massive, decadelong legal project has repaid most of these losses through fines and settlements, and Madoff died in prison, but only after a multi-decade run paid for by the destruction of thousands of people’s economic security. 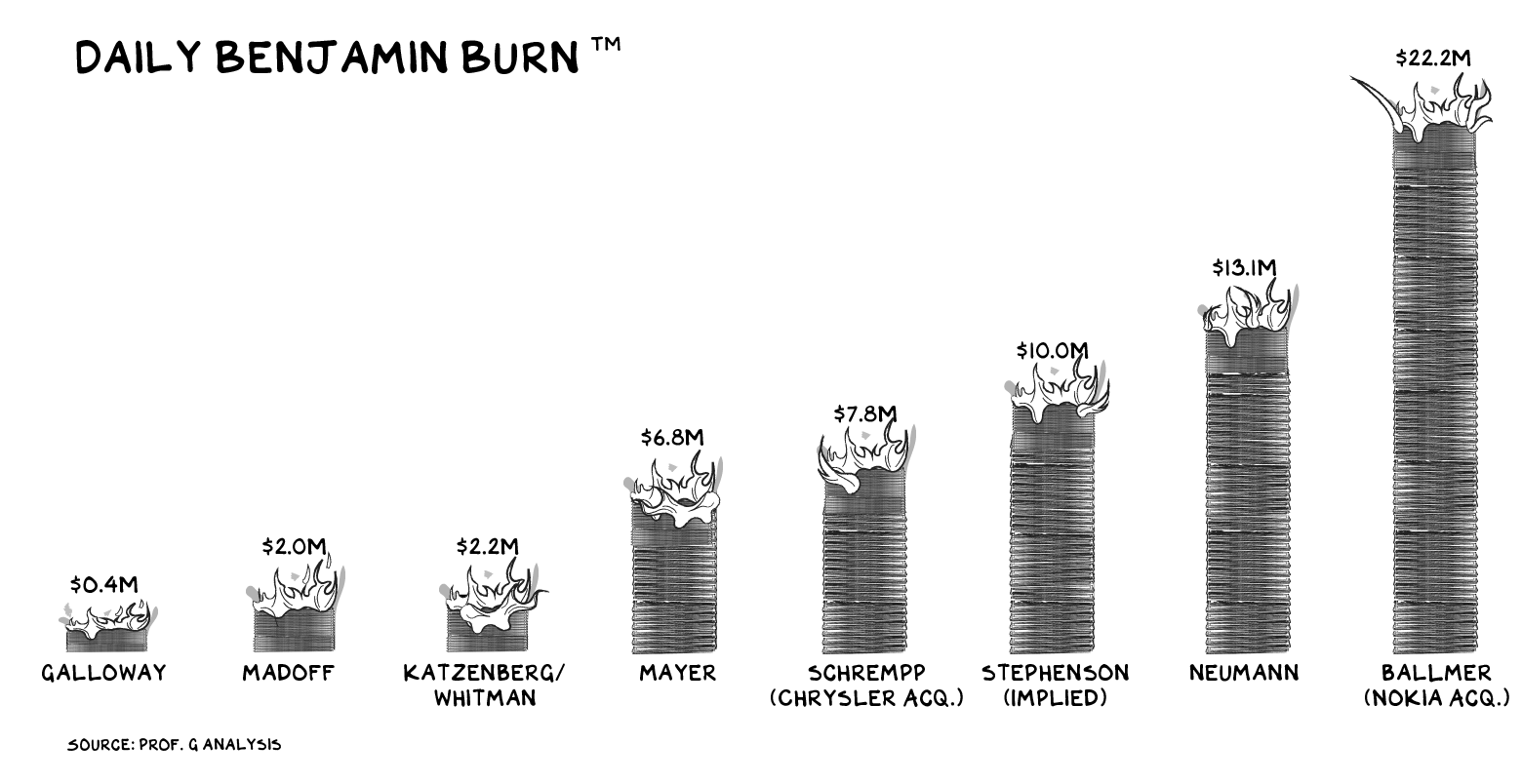 Growing up, I loved to watch my dad pack for business trips. He smelled of Aqua Velva and draped his Izod sweaters over a Ram Golf bag. He’d iron the mammoth collar of his Pierre Cardin shirts, fold them around a piece of wax paper, and lay them into his Hartmann luggage like newborns. It was ceremonial, just as when he’d wear his kilt. Elegant yet masculine. During one of these pre-business-trip ceremonies, when I was about 8, my mom walked in. I looked at my dad’s stuff and asked, "How come dad is so rich, and we’re so poor?"

My dad loves this story and laughs out loud when he tells it. But it wasn’t funny. He’s been married — and divorced — four times. There was some financial stress, there was incompatibility. But the real fissure was that there were two Americas … under one roof. 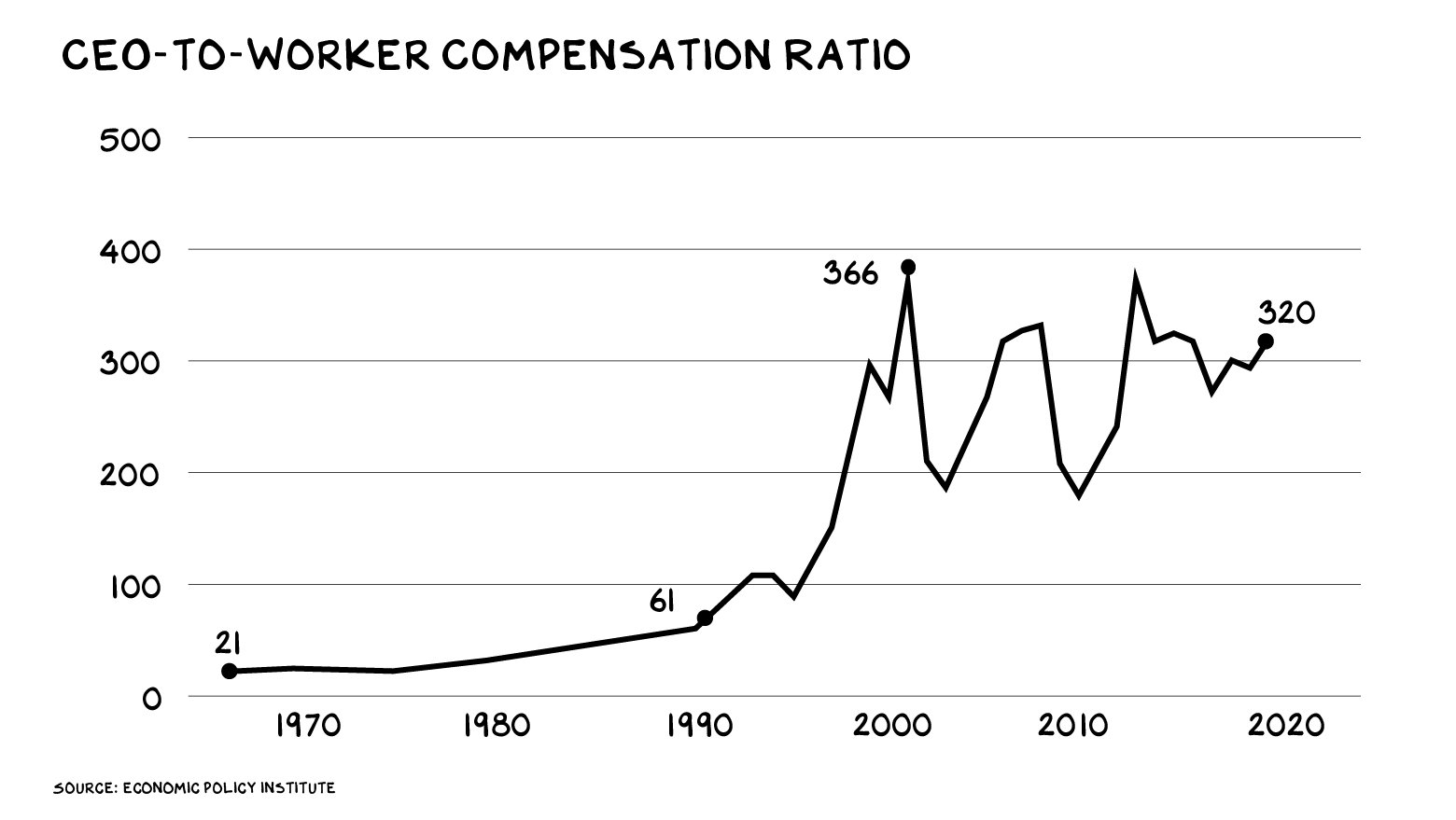 Whether we’re executives, parents, or citizens, we need to ask ourselves: Have our interests diverged from those of the people who matter most to us and society? Do our spouses, children, neighbors, employees, and countrymen win and lose in reasonable harmony? Are we part of a family, part of a nation? Or have we become the MeWork generation?

Life is so rich,

P.S. There’s just over one week until registration closes for the Innovation Strategy Sprint with my former professor, Dr. Sara Beckman. The Section4 team put a short video together with more information about the Sprint format and content. Check it out and register.