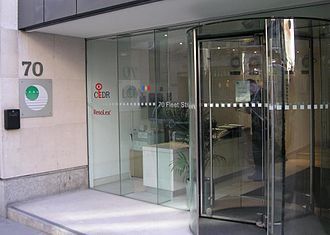 The London Court of International Arbitration (LCIA) is an institution based in London, United Kingdom providing the service of international arbitration.

The administrative headquarters of the LCIA are in London. LCIA is an international institution, which provides a forum for dispute resolution proceedings for all parties, irrespective of their location or system of law. Although arbitration and the provisional of formal arbitration tribunals are the institution's main focus, the LCIA is also active in mediation, a form of alternative dispute resolution (ADR).

On 5 April 1883, the Court of Common Council of the City of London set up a committee to draw up proposals for the establishment of a tribunal for the arbitration of domestic and, in particular, of trans-national commercial disputes arising within the ambit of the City.

The Law Quarterly Review wrote at the inauguration of the tribunal "[t]his Chamber is to have all the virtues which the law lacks. It is to be expeditious where the law is slow, cheap where the law is costly, simple where the law is technical, a peacemaker instead of a stirrer-up of strife."

In 1884, the committee submitted its plan for a tribunal that would be administered by the City of London Corporation, with the co-operation of the London Chamber of Commerce & Industry. However, though the plan had arisen out of an identified and urgent need, it was to be placed on hold pending the passing of the English Arbitration Act 1889.

In April 1891, the scheme was finally adopted and the new tribunal was named The City of London Chamber of Arbitration. It was to sit at the Guildhall in the City, under the administrative charge of an arbitration committee made up of members of the London Chamber and of the City Corporation.

The Chamber was formally inaugurated on 23 November 1892, in the presence of a large and distinguished gathering, which included the then President of the Board of Trade. Considerable interest was also shown both by the press and in legal commercial circles.

In April 1903, the tribunal was renamed the London Court of Arbitration and, two years later, the Court moved from the Guildhall to the nearby premises of the London Chamber of Commerce. The Court's administrative structure remained largely unchanged for the next seventy years.

In 1981 the name of the Court was changed to the London Court of International Arbitration, to reflect the nature of its work, which was by that time predominantly international.

The LCIA remains one of the bigger permanent international arbitration institutions today. It promulgates its own rules and procedures, which are frequently adopted in ad hoc arbitrations even where the LCIA itself is not involved.

The LCIA is formed as a not-for-profit company limited by guarantee. The LCIA Board of Directors (made up largely of prominent London-based arbitration practitioners) is concerned with the operation and development of the LCIA's business and with its compliance with applicable company law.

The Board does not have an active role in the administration of dispute resolution procedures, though it does maintain a proper interest in the conduct of the LCIA's administrative function.

The LCIA Court is the final authority for the proper application of the LCIA Rules. Its key functions are appointing tribunals, determining challenges to arbitrators, and controlling costs.

Although the LCIA Court meets regularly in plenary session, most of the functions to be performed by it under LCIA rules and procedures are performed, on its behalf, by the President, by a Vice President or by a Division of the Court.

The Court is made up of up to thirty five members, selected to provide and maintain a balance of leading practitioners in commercial arbitration, from the major trading areas of the world, and of whom no more than six may be of UK nationality.

Among other parties, the 2006 Softwood Lumber Agreement between the United States and Canada establishes a dispute settlement mechanism based around the LCIA for the two parties' international trade issues regarding softwood lumber.

Headed by the Registrar, the LCIA Secretariat is based at the International Dispute Resolution Centre in London and is responsible for the day-to-day administration of all disputes referred to the LCIA.

LCIA case administration is highly flexible. All cases are allocated dedicated computer and hard-copy files and computerised account ledgers. Every case is computer-monitored, but the level of administrative support adapts to the needs and wishes of the parties and the tribunal (or ADR neutral), and to the circumstances of each case.

Because of confidentiality laws, the LCIA does not publish facts or statistics about the matters it adjudicates upon.