Life in 'The Republic of Pirates'

Movie versions of pirates may miss a more compelling story. Colin Woodard, author of The Republic of Pirates, says for many British sailors, a pirate's life afforded freedom, money and a surprising amount of democracy. 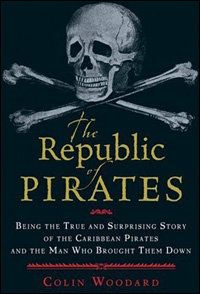 Fans of the "Pirates of the Caribbean" movies will only have to wait a few more weeks to learn the fate the Jack Sparrow, the dastardly but charming pirate played by Johnny Depp. The latest installment in the series, "At World's End," opens in theaters on May 25th.

Depp's deft portrayal of Jack Sparrow has become the iconic image of a pirate for an entire generation of moviegoers.

(SOUNDBITE OF "PIRATES OF THE CARIBBEAN: THE CURSE OF THE BLACK PEARL")

JACK DAVENPORT: (As Commodore Norrington) Without the doubt the worst pirate I've ever heard of.

JOHNNY DEPP: (As Captain Jack Sparrow) But you have heard of me.

KEIRA KNIGHTLEY: (As Elizabeth Swann) Commodore, I really must protest.

KNIGHTLEY: Pirate or not, this man saved my life.

DAVENPORT: One good deed is not enough to redeem a man of a lifetime of wickedness.

DEPP: Though it seems enough to condemn him.

NEARY: Pirates have been the stuff of legend and literature for years, but the story behind the real pirates who once terrorized the seas is at least as compelling as the fiction they inspired. In his new book, "The Republic of Pirates," author Colin Woodard sets out to tell the story about three of the most famous pirates of the Caribbean: "Black Sam" Bellamy, Edward "Blackbeard" Teach, and Charles Vane. Colin Woodard joins us now from member station WMEA in Portland, Maine. Good to have you with us, Colin.

COLIN WOODARD: A pleasure to be here.

NEARY: And to start out with, who are these pirates? What made them so famous?

WOODARD: Well, all of our pirate imagery really comes from this one group of pirates. I mean, this one group of people who operated in the Caribbean between 1715 and 1725 are where most of those images come from. They'd informed Captain Hook and Long John Silver and Jack Sparrow.

And these fellows all knew each other. It was one, sort of, clique of people, albeit they served together. They set up a sort of pirate republic together, and it was unusual in that in addition to, sort of, the common thievery of piracy, this group of people also seemed to be engaged in some sort of conscious social revolt, as it were.

NEARY: What I found really interesting about this story was the circumstances that drove these men into piracy in the first place. First of all, on land: England was really not a very nice place to live at that time, especially if you were very poor, as these men were.

WOODARD: Yeah. About half of the population of England at this time was living in abject poverty, and it caused people, in their desperation for lack of means to feed themselves, to do something as dangerous as going to sea, which was often a death sentence aboard the naval vessels and merchant vessels of the times.

NEARY: Right, because the circumstances that you describe aboard these ships - it was just terrible.

WOODARD: Extremely harrowing, I mean, a lot of people hadn't intended to sign onboard anyway and were, sort of, kidnapped by spirits or thumped over the head in a pub and found themselves onboard these vessels. And then once onboard, the discipline regime was incredibly brutal. And if you're in the Navy, you were very likely to be thrown onboard the next vessel that needed your services before you were ever paid for your previous, say, two-year tour of duty. It's an extremely difficult way to make a living. I mean, the essayist Samuel Johnson said that the lives of sailors were comparable to those of prisoners, only with the added possibility of drowning.

NEARY: So these pirates really, in essence, rebelled against this terrible system under which these sailors lived.

WOODARD: That seems to have been one of the largest motivations for people going into piracy. I mean, most of them were mariners.

NEARY: You mentioned that these three pirates, in particular, formed a kind of republic. They formed their own, sort of, system of governance. Explain how that worked.

WOODARD: Well, in all the pirate vessels, as they were rebelling, as it were, against the conditions on these merchant ships, they sort of turned the world upside down in the way they operated their own vessels and by extension this pirate republic they created in the Bahamas. They were extremely egalitarian. Their captains were actually appointed by a vote of the crews and to be deposed by a vote of the crews. They only had absolute power when they were actually in combat.

The plunder was shared remarkably equally, with the captain only getting usually, say, a share and a half or two shares for each ordinary seaman's share, whereas on a merchant vessel or a regular privateering vessel, it could be, you know, 14 or 15 shares to one.

NEARY: Now for all of this egalitarianism we're talking about that was part of what you called this pirate republic, these were still pretty bad guys, weren't they?

WOODARD: Well, yes. We have this image of, you know, pirate as, sort of, sadistic psychopaths, and some of them absolutely were, and Charles Vane is a sort of a case in point, somebody who was undertaking great acts of brutality. But many of these pirates were surprisingly discreet in their use of force including Blackbeard. The idea of some of the more thinking pirates was that you would cultivate, sort of, an image of terror. You know, Blackbeard was - had this long, scary beard and fierce eyes and was tying lighted fuses in his beard when he went into battle, so, you know, there's this plume of smoke and fire coming off him as if he's some apparition from hell, and this would be so terrifying to the crews of vessels they'd approach that they would often surrender without firing a shot.

NEARY: And they became kind of folk heroes, didn't they?

WOODARD: It's clear that ordinary people didn't look upon these pirates as monsters but in fact as some sort of folk heroes, you know, socking it to the man, so to speak. And this made them all the more dangerous to the authorities in these colonies.

NEARY: So is there any truth to the images that we see these days in film and literature about pirates, especially the "Pirates of the Caribbean" movies?

WOODARD: Well, some of it's definitely accurate, your classic image of pirates with eye patches and hook for arms and peg legs. The sort of flamboyant way of dressing also seems to be accurate. There was sort of a very "Mad Max" kind of quality, I would think, for the people on the other vessel watching them approach.

NEARY: So Johnny Depp is not so far off.

WOODARD: It's not as far off as you'd think.

NEARY: Colin Woodard is the author of "The Republic of Pirates." He joined us from member station WMEA in Portland, Maine. It was good talking with you today.

WOODARD: Likewise. Thank you for having me.

NEARY: You're listening to WEEKEND EDITION from NPR News.

Copyright © 2007 NPR. All rights reserved. Visit our website terms of use and permissions pages at www.npr.org for further information.

NPR transcripts are created on a rush deadline by Verb8tm, Inc., an NPR contractor, and produced using a proprietary transcription process developed with NPR. This text may not be in its final form and may be updated or revised in the future. Accuracy and availability may vary. The authoritative record of NPR’s programming is the audio record.

Books Featured In This Story 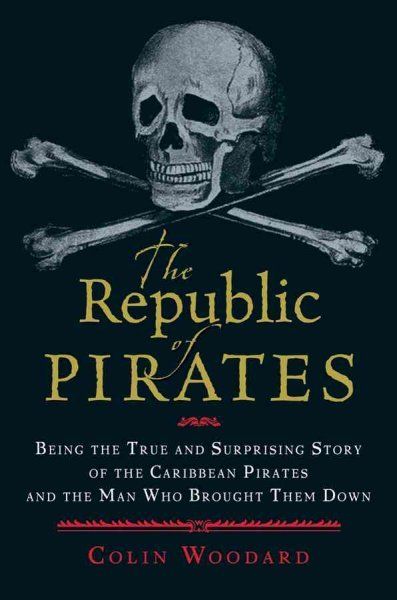 The Republic of Pirates

Title:
The Republic of Pirates
Subtitle:
Being the True and Surprising Story of the Caribbean Pirates and the Man Who Brought Them Down
Author:
Colin Woodard

NPR's Favorite Books Of 2020: The Book Concierge Is Back With 380+ Great Reads

Let This 'Wild Rain' Sweep You Away

U.S. Cyber Weapons Were Leaked — And Are Now Being Used Against Us, Reporter Says

How Severe Is Your State's Coronavirus Outbreak?

5 Takeaways From The Trump Impeachment Trial After Defense Wraps Up

Steps Of The Senate Impeachment Trial: What Happens Before Final Vote