Leaving Value on the Table

My city’s downtown has been undergoing a building boom over the past decade, and the most prominent non-waterfront addition to the skyline is a 12-story condo tower, with commercial and office space on the bottom two floors. This mixed-use project has a unique feature: it was built over a public street. The city turned over to the developer a little-used, half-block stub of State Street that used to be flanked by a potholed parking lot and an unremarkable low-rise office building.

In exchange for the city giving up the street, the developer promised a pedestrian promenade along its course. There would be a tunnel through the heart of the new project that would be a lively hub for outdoor dining, retail, and strolling. Check out the artist’s rendering that was posted on a sign at the construction site for well over a year:

I was pretty excited when I saw this: it really looked like we were going to replace a parking crater with a pretty compelling urban space. A safe, sheltered oasis not only to walk through without fear of cars, but a place to linger with a coffee and a friend.

The Mark opened up to residents starting in November 2019, and most of the 157 condos sold (and in some cases resold) very quickly. But that ground floor turned out, well, not as advertised: 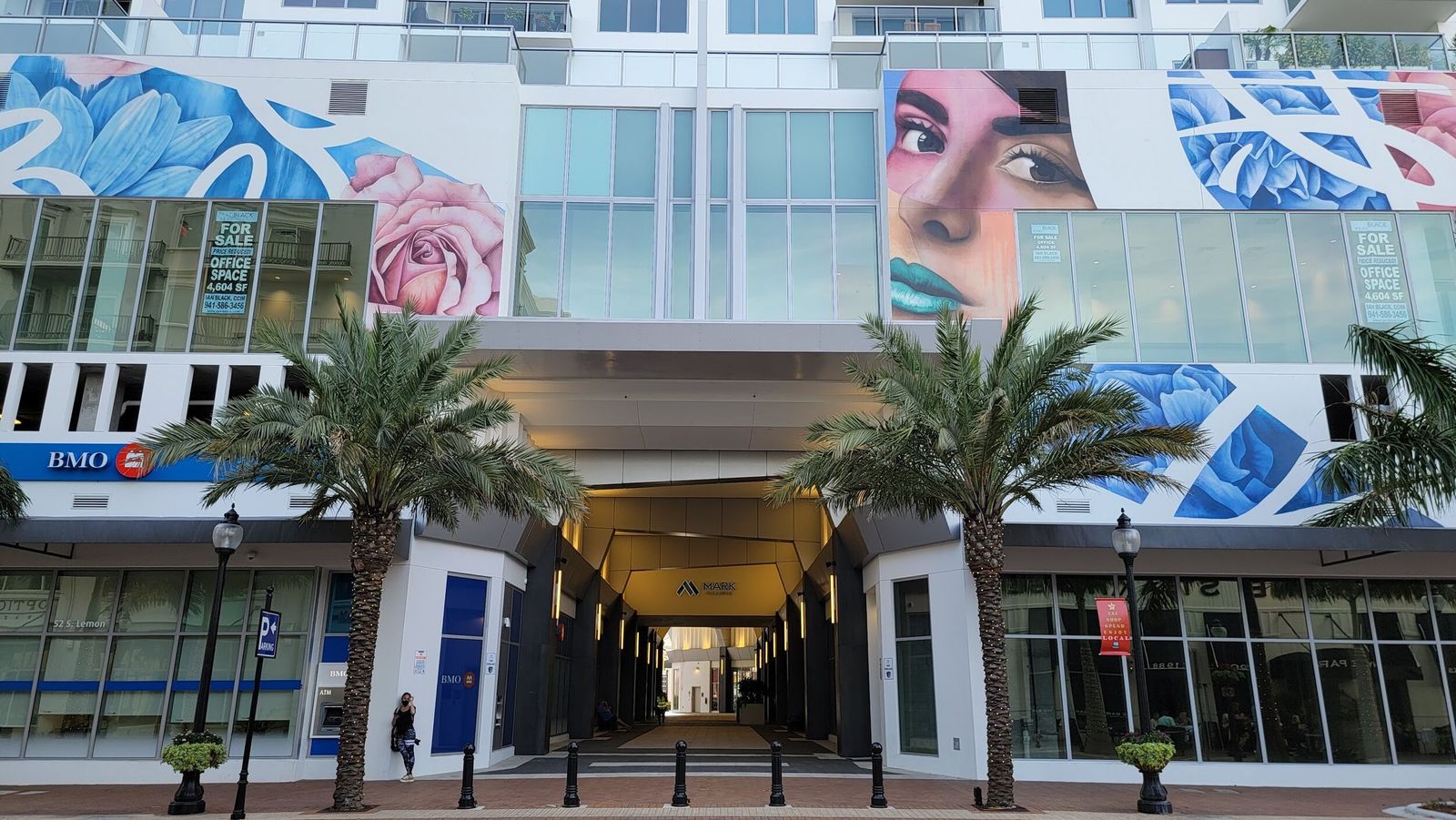 The building itself is attractive, with large murals on both sides. I like the architecture, as far as 2010s-Big-White-Box-Revival goes. But that "promenade" is not much to look at.

Not all the ground-floor spaces are full yet, which is understandable: COVID-19 hit only a few months after the building opened, and presumably disrupted the market significantly. But the tenant occupying the most prominent corner spot is…a bank. With no entrance on the corner. Not something that is going to generate much street life. Excuse me while I work to contain my enthusiasm.

On one level, this is an object lesson in how artist’s renderings lie. Scroll back up to that rendering, and ignore all the illustrated people, tables, and chairs. Look more closely at the building itself this time, and you’ll see, true to the final result, one key design feature that was all but guaranteed to deaden the pedestrian space: The commercial spaces are too big. There are long expanses of floor-to-ceiling windows, sure, but very few actual entrances to the businesses lining the space, and the entrances aren’t even easy to locate on sight. It’s a look, but don’t touch, experience.

The individual commercial units are too large to comfortably host a cozy coffee shop or wine shop as depicted in the rendering. The illustration makes those businesses look smaller than the actual finished space is, implying they put up an extra partition or something. 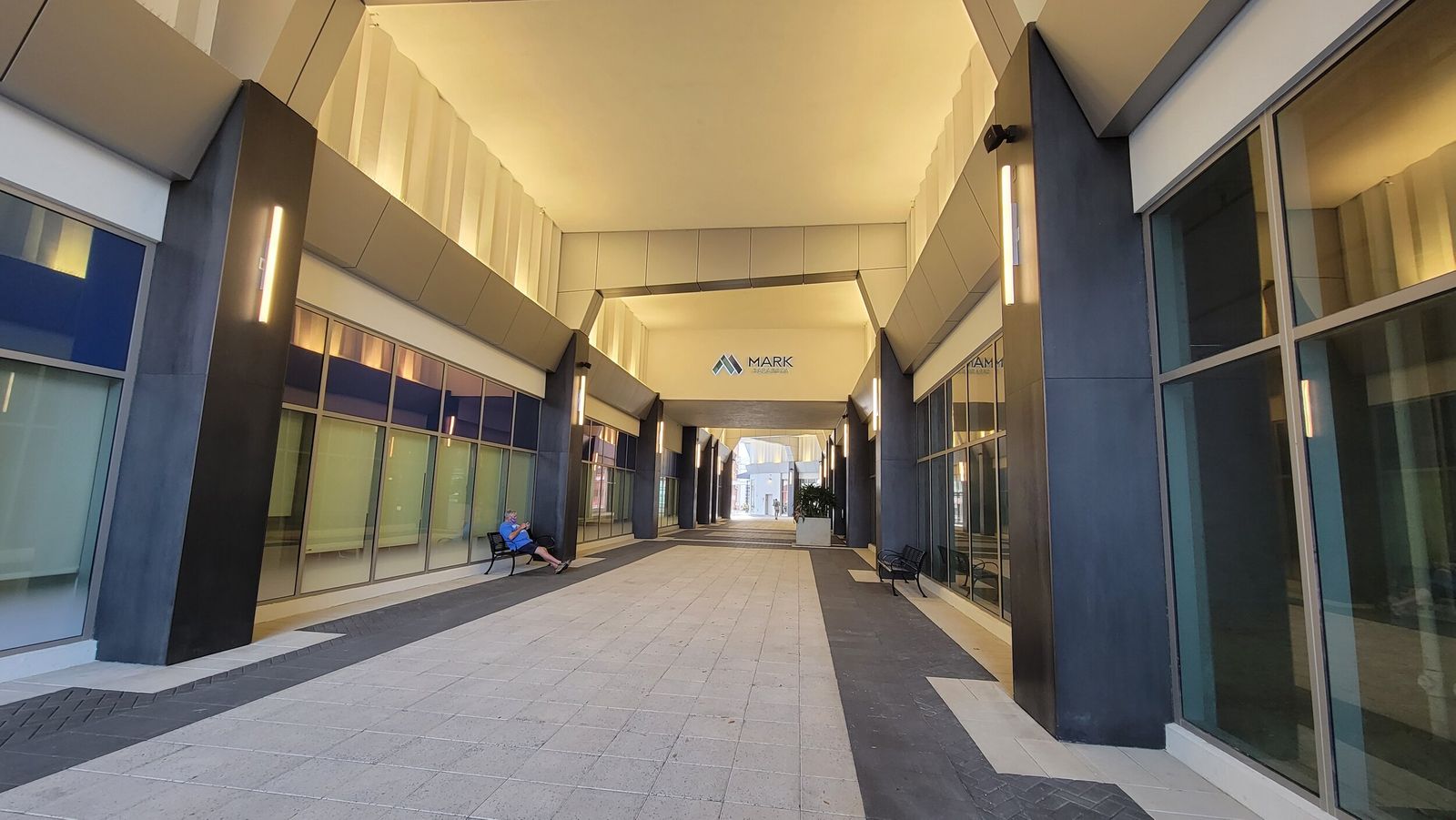 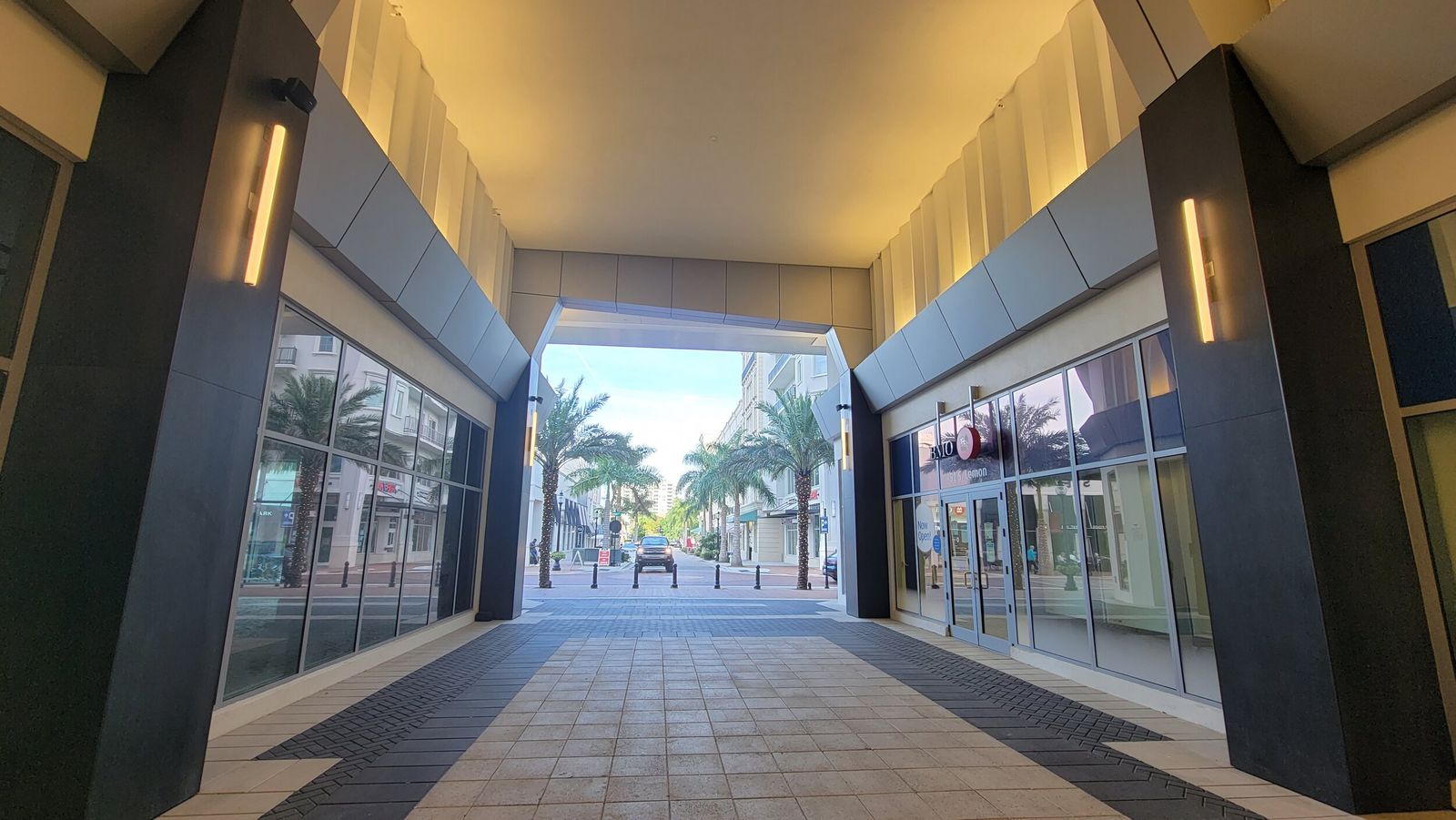 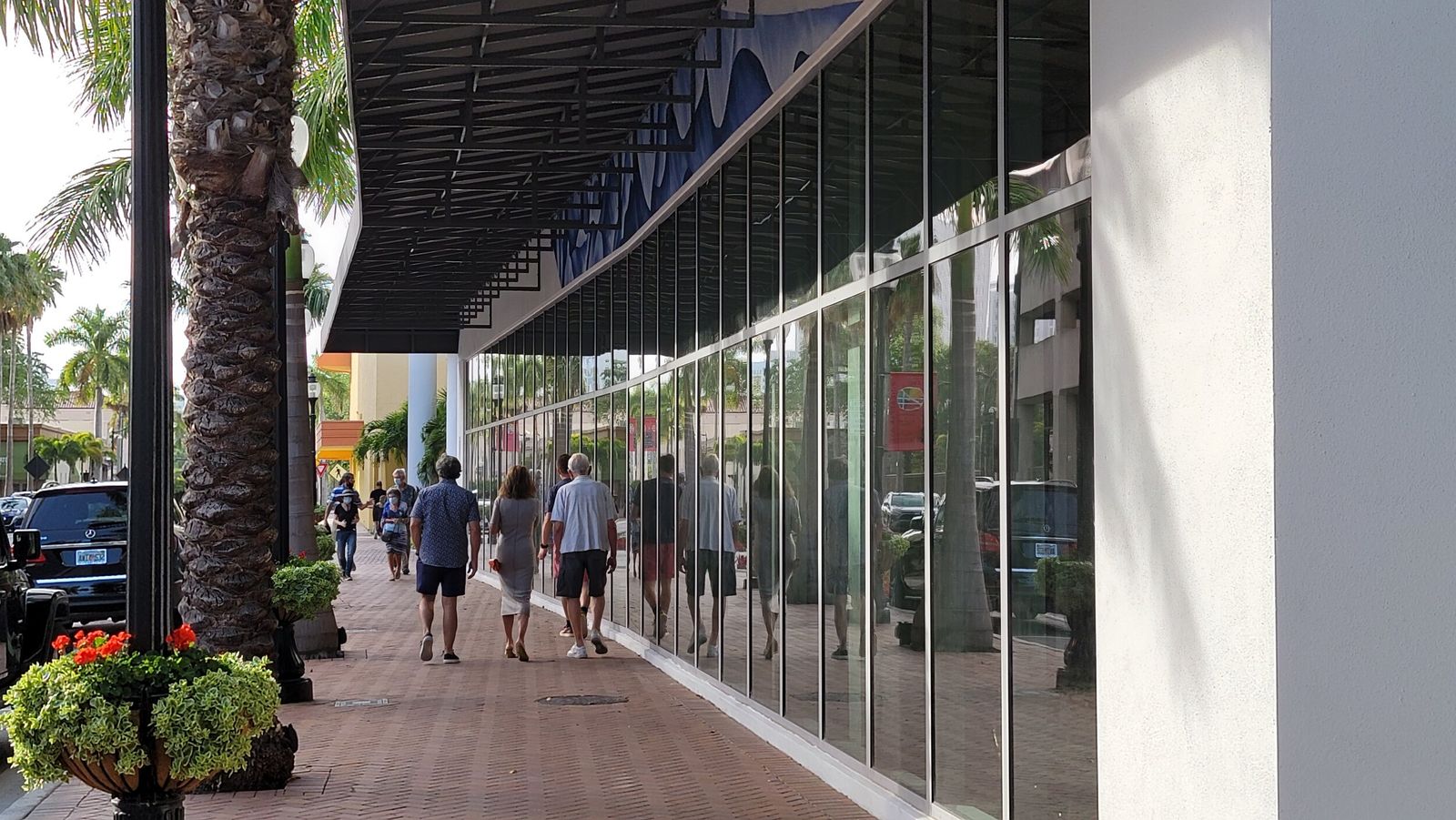 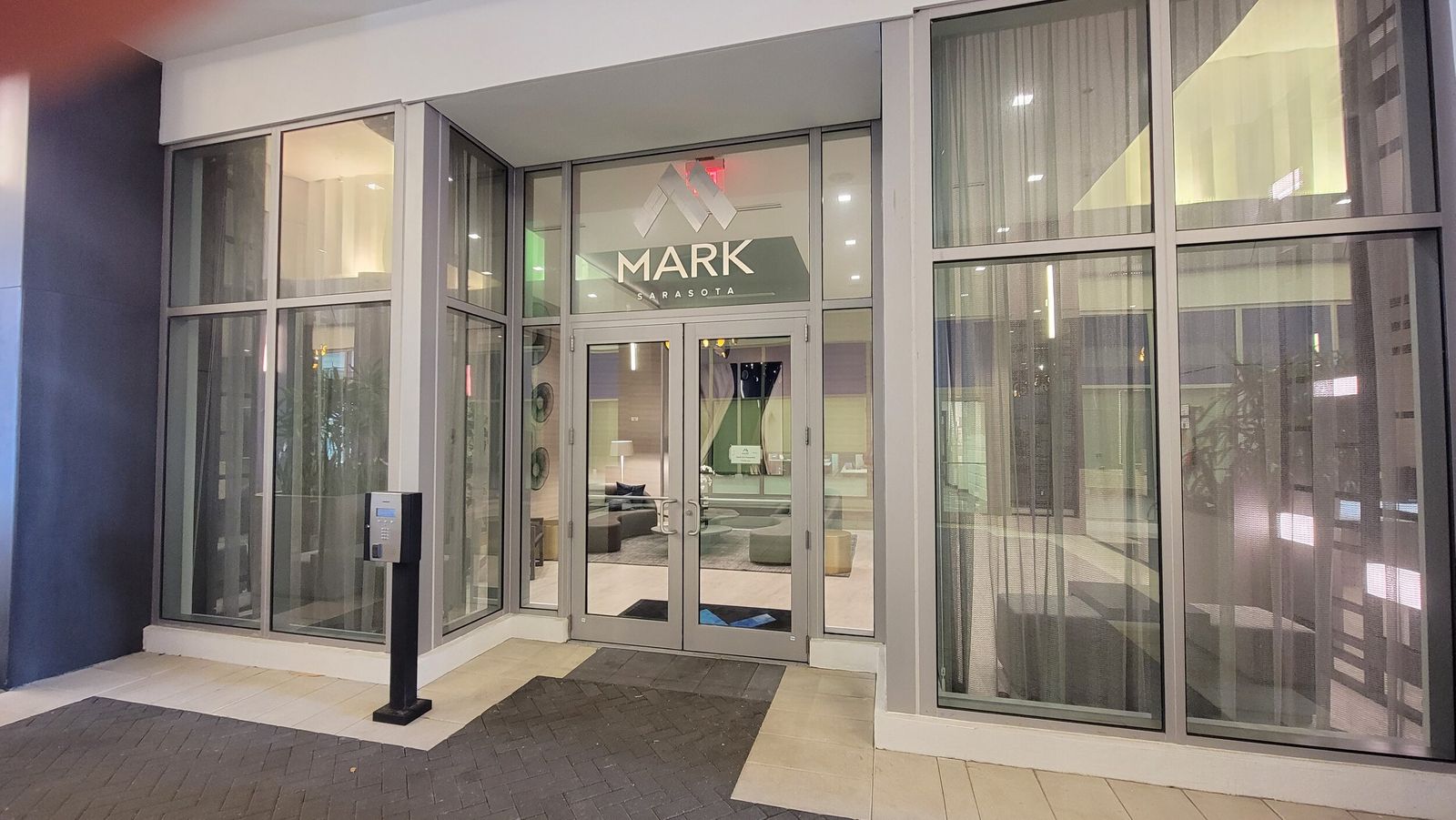 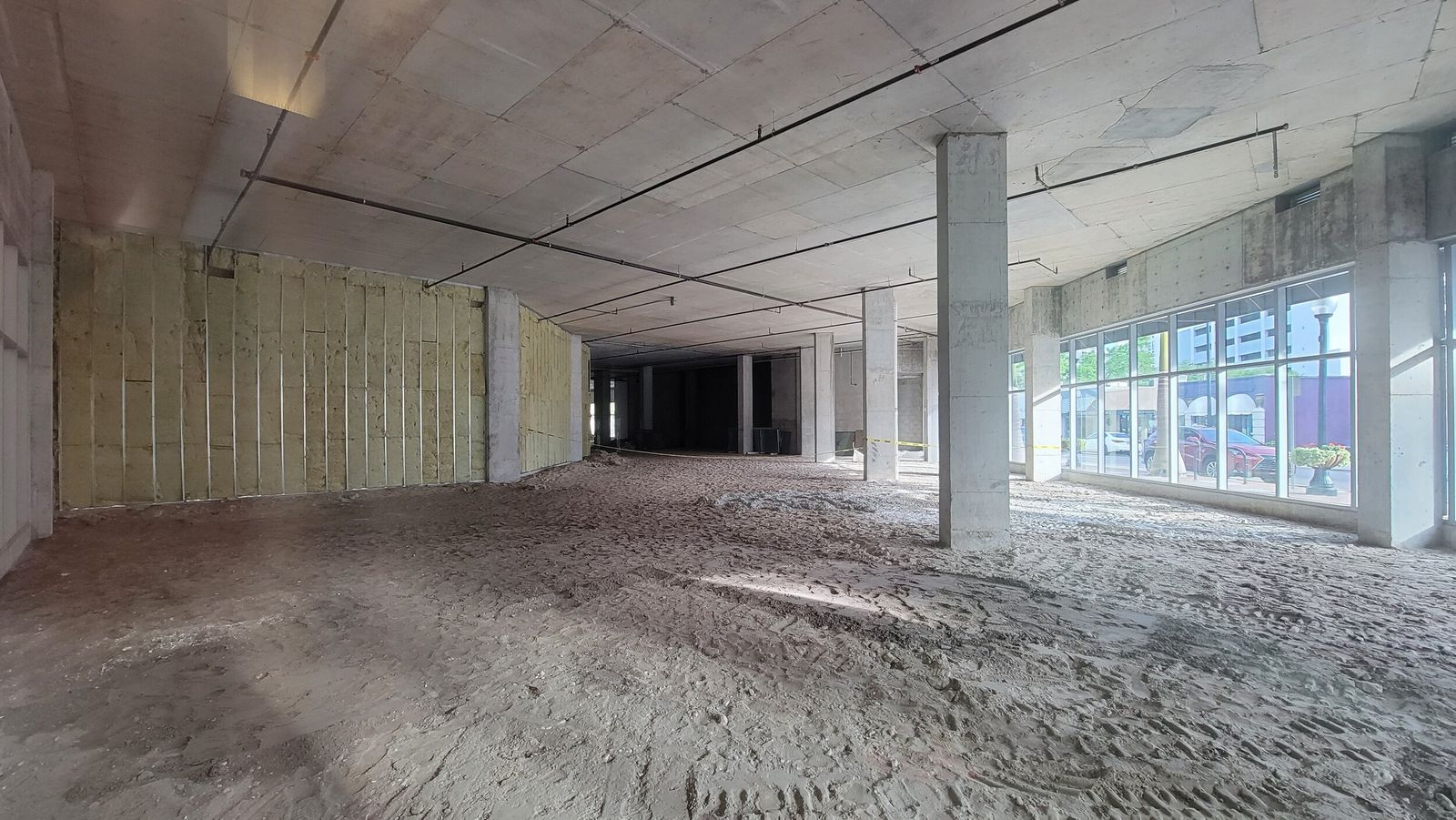 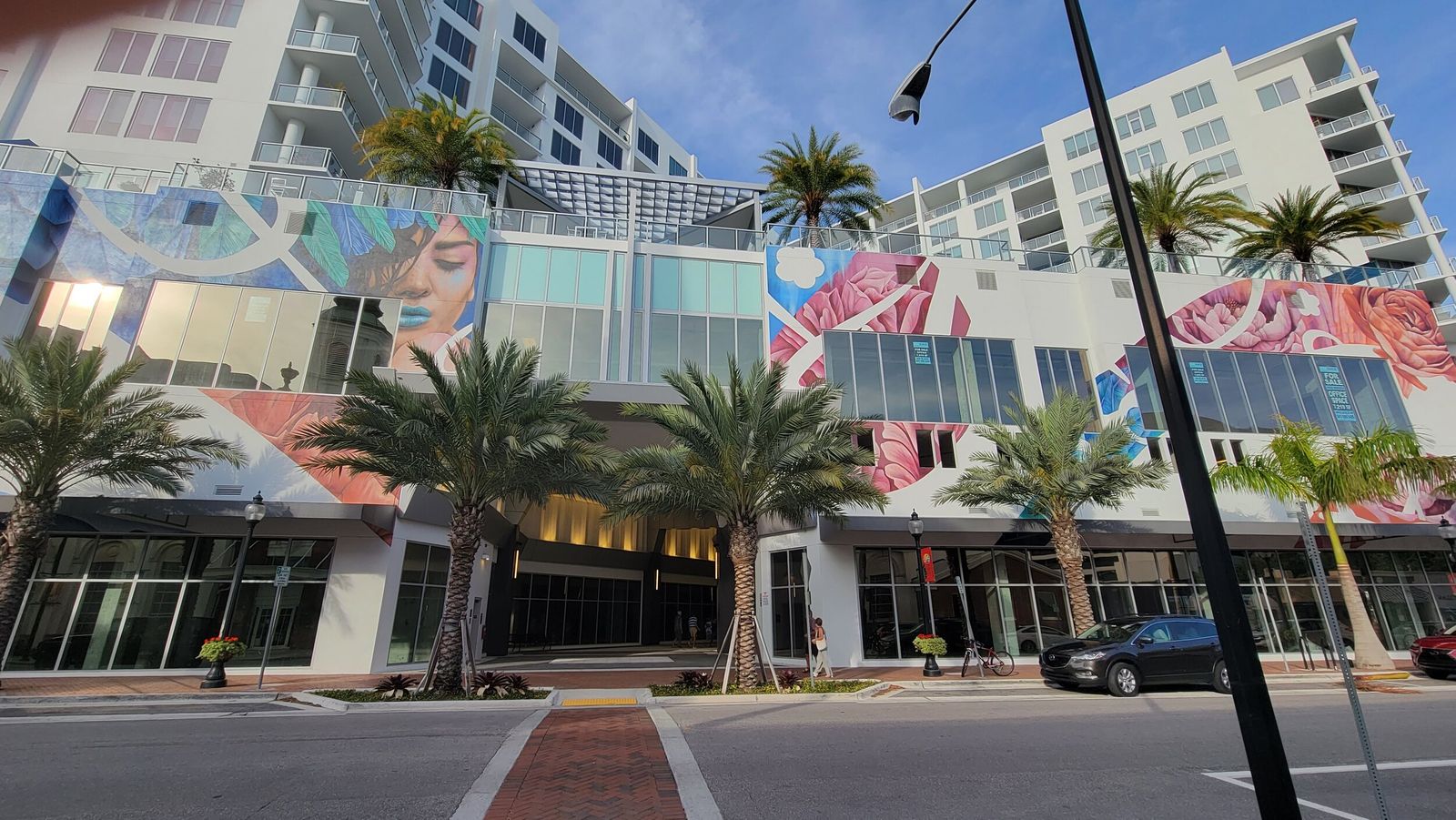 Both of these things contribute to a very low Gehl Door Average: the frequency of front doors encountered as you walk along the front of a building. Having a lot of entrances is crucial to the granularity that creates a lively streetscape. It means you’ve got people flowing in and out of businesses, stopping to poke around or inspect the surroundings. And it means the businesses are narrow, the frequent changes creating more variety and sensory interest as you walk.

The street leading to The Mark, it should be noted, has just such a granular mix of restaurants and bars with outdoor seating, and almost always has pedestrians milling about. Even though the building on the left is literally a parking garage (albeit cleverly disguised). This photo was taken on the same walk, so you can’t accuse me of selectively photographing The Mark at a non-busy time:

When you get to The Mark’s supposed "pedestrian promenade," all of that just dissipates. And it’s not just a matter of the space not being all occupied yet. Those giant glass walls, and spaces better suited for a supermarket (or, well, a bank) than a café, are never going to be conducive to a lively sidewalk life. Small local businesses will never be able to operate in spaces that huge.

The condo tower’s lobby is accessed from the middle of the pedestrian tunnel via a keycard entrance. Even the management office faces this corridor. Nothing about it screams, "We want people to linger here."

But why didn’t they design it to be a lively space?

I was giving someone a tour of downtown by bicycle lately, and I described the promenade as advertised and the gap with reality, and he asked, "Why didn't they build it the way they illustrated it?" It's a good question. This is at the heart of a very successful dining, shopping, and nightlife district. The advertising slogan for these condos was literally "Downtown is downstairs." Why wouldn't you, as the building operator, want to boast a killer pedestrian promenade? Why wouldn't you want a bustling, exciting space that would boost interest in and thus demand for your building?

It's a good question. Why leave this value on the table by creating something bland after going to the trouble to mock up something really cool?

Truth is, you see this wasted potential a lot with this kind of building: the shiny new kind that fills a whole city block. A location that seems really conducive to creating A+ urban space, and then the end result is a big "meh." Why is this specifically true of large-scale development?

A lot of people default to the answer that "the developers are greedy and only motivated by their bottom-line, so they're cost cutting." This answer is inadequate in two ways: one, the developer could likely make more money by creating a really exceptional space, and two, "greed" as a criterion fails to distinguish the big developer from the small one. Lots of people are motivated by profit and self-interest.

I gave my friend two answers which I think better explain why a developer building a high-end project would waste the opportunity to design a space that would add value and draw people in.

It costs tens of millions of dollars to build a high-rise like this. The kind of developer who builds such a project is working with larger institutional lenders: the kind of bank that can issue a construction loan of that magnitude. The bank is interested in the pro forma spreadsheet, not the project itself, and definitely not in the broader value created by the community. They don’t care what it looks like on the ground or how people use it, or whether it’ll hold its value and appeal for decades. They want to know that the building will bring in a certain level of rents right off the bat that can comfortably repay the construction loan.

The risk-averse thing to do is to lease commercial space to chains ("national credit tenants" in industry jargon). And in some cases to hold spaces open until you can line up a national chain in a long-term lease. Those tenants often have stipulations about the space. They want it bigger. They want it custom designed for them—which often means an open or very particular floor plan and less ability to subdivide the space later to accommodate small, local businesses. They want certain features associated with security or ease of operations for them—likely the reason the bank here does not have multiple prominent entrances, but one somewhat obscure entry door facing the interior of the passageway.

This doesn't produce the best building that can generate resilient value for 30, 50, or 100 years. It produces the most risk-averse building in year one or year two. It’s all about a guaranteed return to investors.

We’ve published multiple pieces (see here, here, and here) about the perverse incentives related to development finance that might preclude a developer’s interest in creating more adaptable, smaller spaces, or even any sense of urgency to fill vacant spaces that exist.

There's another reason that large-scale developments tend to underwhelm when they're finished. And this one doesn't have to do with bankers or the market; it's a more basic lesson in mathematics. And that's the relationship of scale to the question of how much attention to detail will pay off.

Think about the contrast between a tiny courtyard garden and a large formal garden. The gardener who creates the former must pay obsessive attention to every detail of the space, because there is none to waste. Every square foot matters and has been thoughtfully curated. In the large garden, on the other hand, the space may be impressive as an ensemble. But there are lots of individual square feet you could zoom in on that are essentially featureless. They’re just grass or dirt: negative space. There’s nothing wrong with the formal garden, but it’s clearly impossible for those who maintain something like the picture on the right to obsessively curate every inch of space. 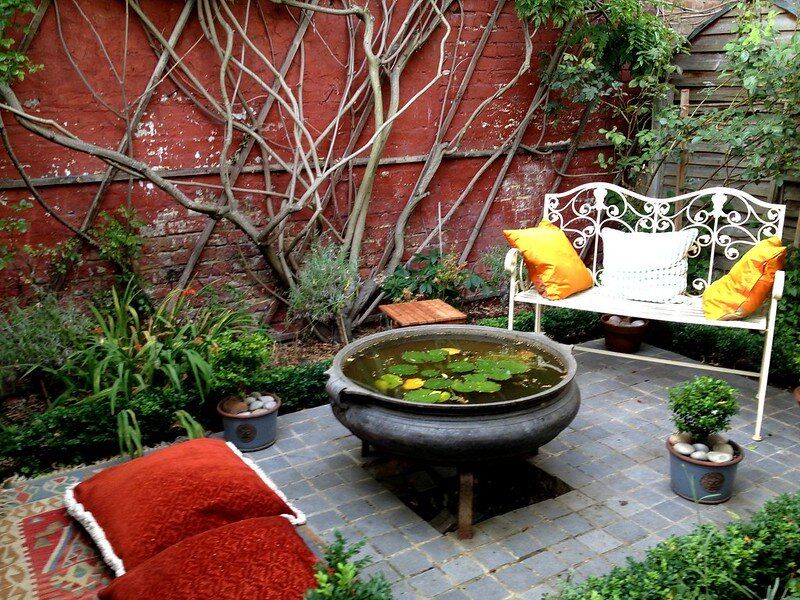 A large-scale endeavor—any sort of endeavor—won't be designed to wring every last bit of value out of the smallest details, because it can't possibly be. That’s not the model.

A 12-story condominium tower with 157 residences is a large undertaking, of which the street-level space is a small part, financially. The building owner is probably in trouble if those ground-floor spaces, and the second-floor office space, are never leased up. But if they’re not designed to wring the maximum possible value out of that space, by creating a truly exciting destination, it won’t doom or particularly affect the project as a whole. Get your national credit tenants lined up, keep them happy enough, and focus your attention on selling the condos, which are really your profit center.

From the public’s perspective—aside from the up to 157 very wealthy households who move in to The Mark—that ground-floor space is everything, and its value should not be wasted. If that promenade were divided up into a bunch of small storefronts, the diversification of ownership (I mean "owner" in the sense of control over the space, even if the businesses are renting) would produce a much more exciting environment regardless of the quality of anyone’s plan or vision. The reason for this is simple: each individual business will have an incentive to optimize the value and beauty of its own space. And they’re operating at a scale where a lot less can be spared in doing so. There’s only so much length of prime sidewalk in the downtown core of a mid-size city, and I’d like to see it developed more with the eye of the small-scale courtyard gardener. Maximizing, shall we say, delight per square foot. 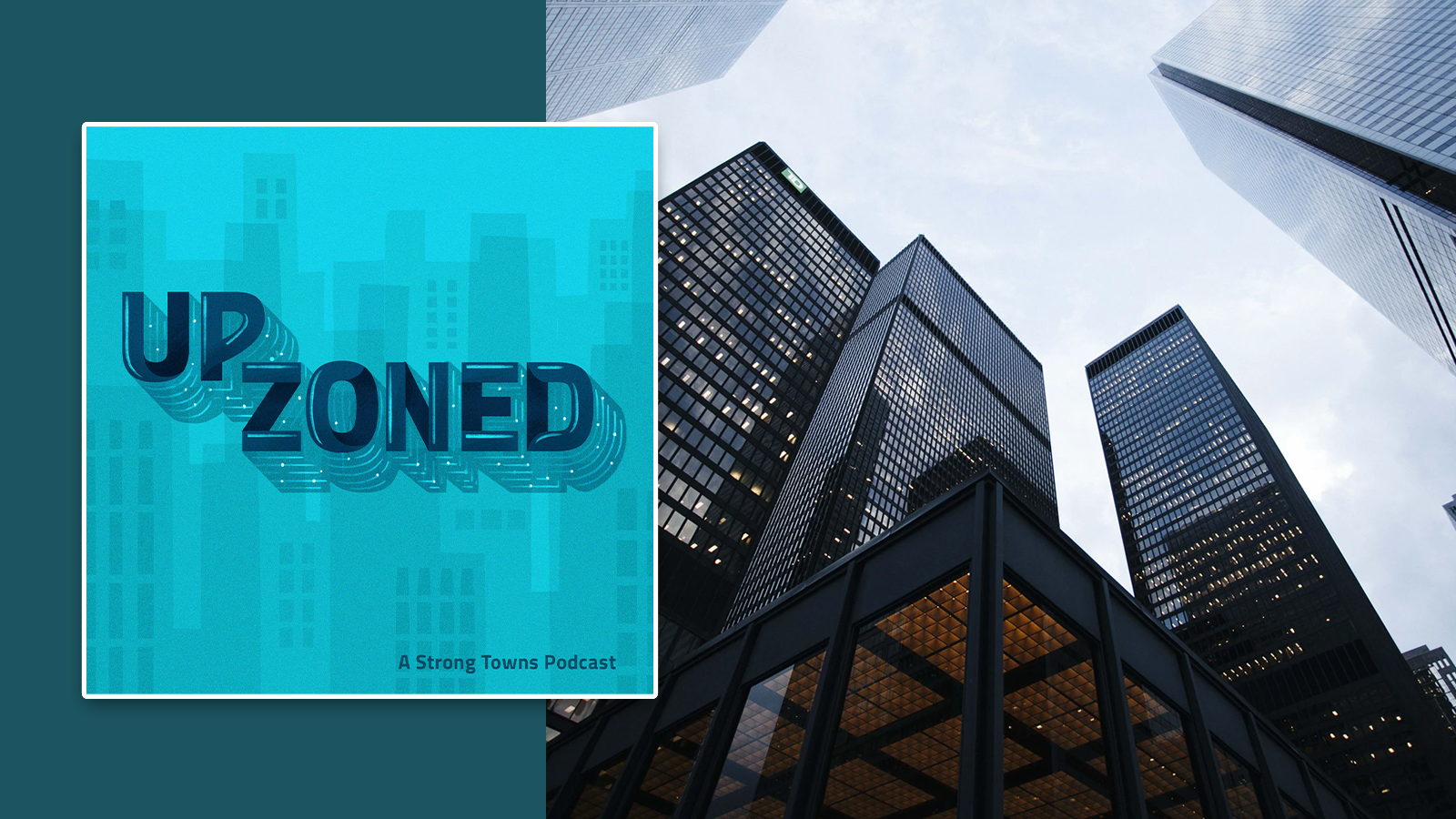 COVID has changed the way people think about the future of office work. What does this mean for office-heavy downtowns? 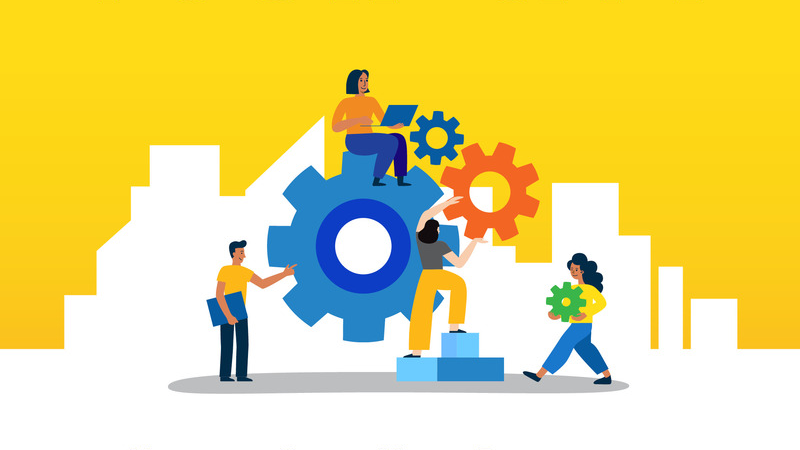 Check out this preview of Ilana Preuss’s Recast Your City to find out how small-scale manufacturing can help bring struggling neighborhoods back to life. 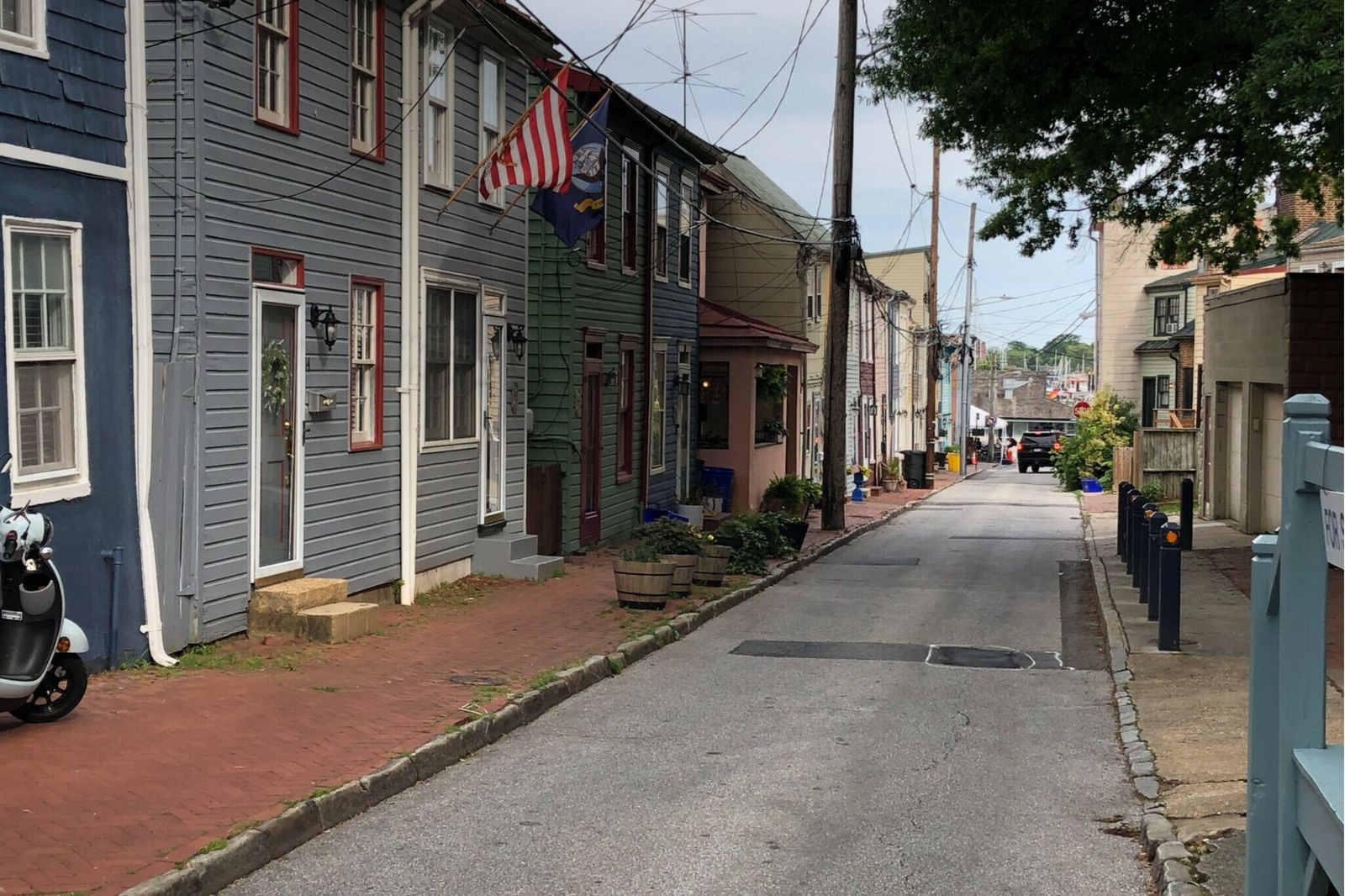 Daniel Herriges serves as Senior Editor for Strong Towns, and has been a regular contributor since 2015. He is also a founding member of the organization. Daniel has a Masters in Urban and Regional Planning from the University of Minnesota, with a concentration in Housing and Community Development. He grew up in St. Paul, Minnesota, before moving west to the San Francisco Bay Area, and later east to Sarasota, Florida, where he lives with his wife, daughter, and too many pets.

Daniel’s obsession with maps began before he could read; a general fascination with cities and how they work was soon to follow. He can often be found exploring out-of-the-way neighborhoods (of his own town or another) on foot or bicycle. Daniel’s lifelong environmentalism can also be traced all the way back to age 4, when he yelled at his parents for stepping on weeds growing in sidewalk cracks.