Researchers are raising suspicions over the Kolon Life Science’s clarification of the mislabeling of Invossa-K, now suspended drug for degenerative arthritis.

One of their questions includes why the company has been unaware of the misidentification of the drug’s ingredient cell during clinical trials for the past 15 years. 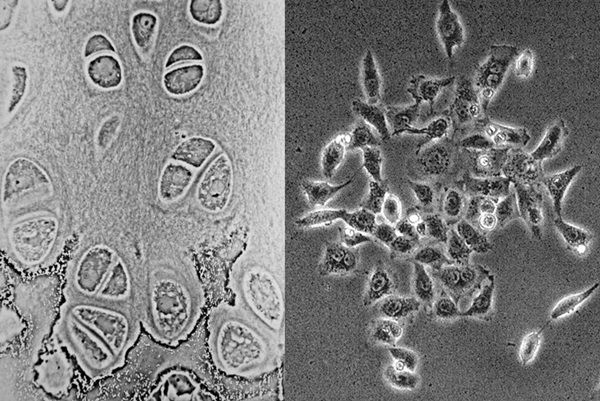 The drugmaker said on Monday that its recent short tandem repeat (STR) testing revealed that the drug’s transformed cells (TC) were 293 cells derived from the kidney, not from the cartilage.

293 cells, also known as human embryonic kidney 293 (HEK-293) cells, have different shapes from those of cartilage cells. While cartilage cells are broad and round, HEK 293 cells are pointed sharply.

A simple karyotypic analysis of the chromosomes’ numbers and shapes would have shown that cells were different, experts said.

Kolon Life Sciences refuted that the cells’ karyotypes became "considerably unstable because retroviruses placed their genes in the chromosomes here and there." Besides, radiation radically changed the cells’ shapes and karyotypes from the commonly-known ones, it said.

However, researchers still said they could not understand why the company did not know.

293 cells are noticeably different from normal cells in terms of the speed of proliferation and the expression because the formers are transformed for indefinite proliferation just like cancer cells.

"If the transformation was severe, it might have been difficult to distinguish the cells from the others. If the company checked the speed of the cell growth and metabolic rate in the culturing process, however, it could have known that the cells were different from cartilage cells," a researcher at a research institute said. "The company had a chance to run STR testing in the past. There were many other tools to identify the cells. It’s surprising that it didn’t verify cell lines at all."

Another researcher at a biotech company also questioned how the company did not know the specifications of the cells (293 cells) were different from those of the cartilage cells.

The researcher at the lab said the company’s failure to notice the cell mislabeling for 15 years was equal to a neglect of duty on quality control of cells.

"The company should take responsibility for putting patients at risk with careless quality control," he said.