Freddie deBoer says we’re a planet of cops. Maybe that’s why justice is eating the world.

Helping the poor becomes economic justice. If they’re minorities, then it’s racial justice, itself a subspecies of social justice. Saving the environment becomes environmental justice, except when it’s about climate change in which case it’s climate justice. Caring about young people is actually about fighting for intergenerational justice. The very laws of space and time are subject to spatial justice and temporal justice.

I can’t find clear evidence on Google Trends that use of these terms is increasing - I just feel like I’ve been hearing them more and more often. Nor can I find a simple story behind why - it’s got to have something to do with Rawls, but I can’t trace any of these back to specific Rawlsian philosophers. Some of it seems to have something to do with Amartya Sen, who I don’t know enough about to have an opinion. But mostly it just seems to be the zeitgeist.

This is mostly a semantic shift - instead of saying "we should help the poor", you can say "we should pursue economic justice". But different framings have slightly different implications and connotations, and it’s worth examining what connotations all this justice talk has.

"We should help the poor" mildly suggests a friendly optimistic picture of progress. We are helpers - good people who are nice to others because that’s who we are. And the poor get helped - the world becomes a better place. Sometimes people go further: "We should save the poor" (or the whales, doesn’t matter). That makes us saviors, a rather more impressive title than helpers. And at the end of it, people/whales/whatever are saved - we’re one step closer to saving the world. Extrapolate the line out far enough, and you can dream of utopia.

"We should pursue economic justice" suggests other assumptions. Current economic conditions are unjust. There is some particular way to make them just, or at least closer to just. We have some kind of obligation to pursue it. We are not helpers or saviors, who can pat ourselves on the back and feel heroic for leaving the world better than we found it. We are some weird superposition of criminals and cops, both responsible for breaking the moral law and responsible for restoring it, trying to redress some sort of violation. The end result isn’t utopia, it’s people getting what they deserve.

(cf. Thomas Jefferson: "I tremble for my country when I remember that God is just.")

What is "climate justice"? Was the Little Ice Age unjust? What if it killed millions? Is it unjust for Mali to have a less pleasant climate than California? What if I said that there’s a really high correlation between temperature and GDP, and Mali’s awful climate is a big part of why it’s so poor? Climate justice couldn’t care less about any of this. Why not? Hard to say. Maybe because there’s no violation and no villain.

Is that conflating the sophisticated Rawlsian sense of justice with the vulgar criminal sense? Maybe. But do you think the millions of people talking about _____ justice who have never heard of Rawls are somehow avoiding that conflation? I think it’s a motte-and-bailey: justice - as it’s actually used - is catchy exactly because it does draw on criminal justice connotations. I don’t think it’s a coincidence people are talking about "climate justice" at the same time there are 311,000 Google hits for "climate villains": 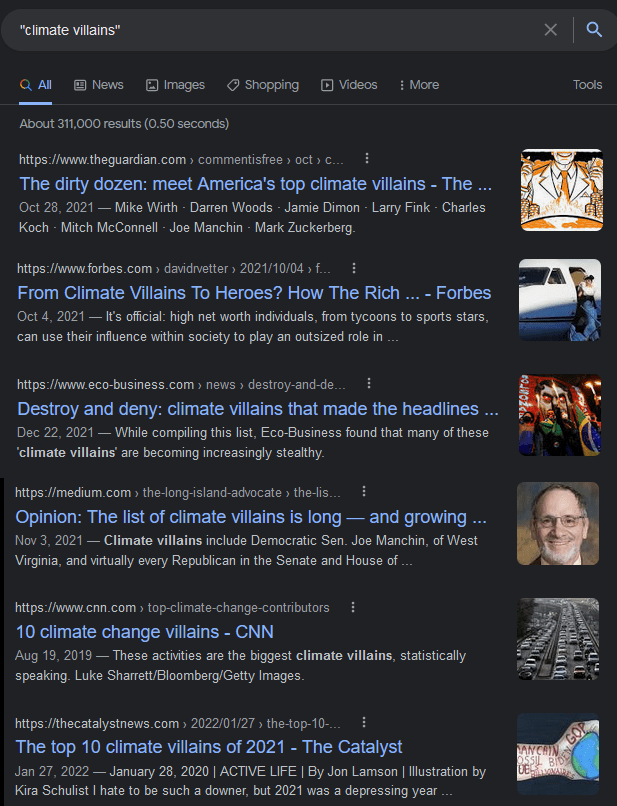 Slightly edited to avoid repeats. Also, the international group for pursuing climate justice is called COP, and this is not a coincidence because nothing is ever a coincidence.

You can’t "help the economy" or "save the poor" merely by harming rich people. Can you get "economic justice" this way? Depends who you ask, but I notice that "getting justice" for a murder involves punishing a suspect a lot more often than it involves resurrecting the victim.

There’s one last disadvantage I’m having trouble putting into words, but which I think is the most important. A narrative of helpers and saviors allows saints. It allows people who are genuinely good, above and beyond expectations, who rightly serve as ideals and role models for others. A narrative of justice allows, at best, non-criminals - people who haven’t broken any of the rules yet, who don’t suck quite as much as everyone else. You either stand condemned, or you’re okay so far. If it has any real role models, it’s the cop who wins Officer Of The Year, the guy who’s more sensitive to violations and more efficient in punishment than anyone else. Turn this guy into your moral model, and you’ve got, well, the planet of cops.

Here’s a crazy theory: the moral transition from other virtues to Justice mirrors the literary transition from utopian fiction to dystopian. In Utopia, people practice virtues like Charity, Industry, and Humanity, excelling at them and making their good world even better. In Dystopia, Justice is all you can hope for. If I were in Terra Ignota, my fondest wish would be to excel in some way the same way Sniper, Apollo Mojave, and the other utopian characters excel, bringing glory to my Hive and giving its already-brilliant shine extra luster. But if I were in 1984, my fondest wish would be to bring O’Brien and the others to justice; to watch them suffer, to undo the wound in the world caused by their scheming.

Of course, every society is somewhere in between Utopia and Dystopia, and needs values relevant to both. Justice is a useful lens that I’m not at all trying to get rid of. But when it starts annexing all the other virtues, until it’s hard to think of them except as species of Justice, I do think that’s potentially a sign of a sick society.

("A sick society? Sounds like you need some health justice, medical justice, and wellness justice!" —— "You’re not helping!")