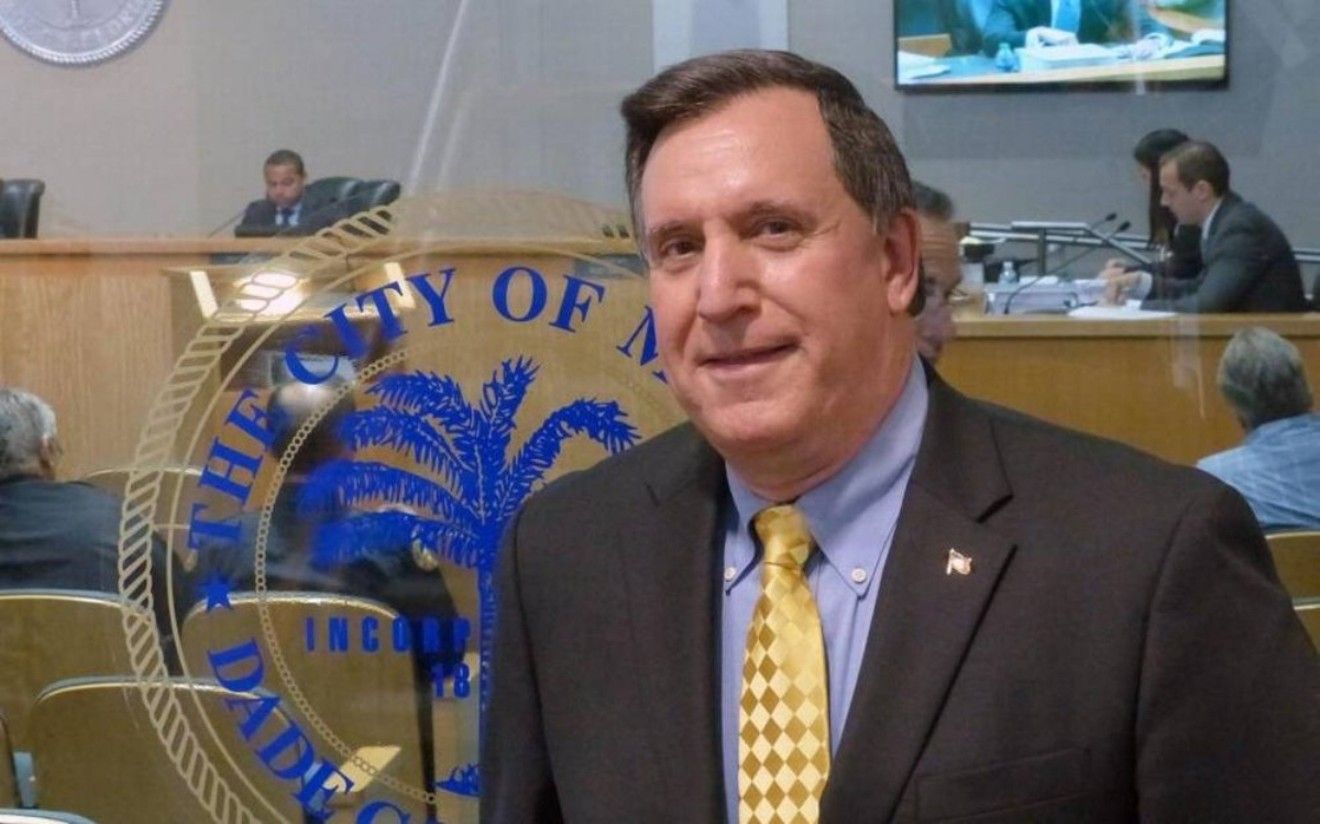 This past weekend, Miami-Dade County and the City of Miami butted heads over a set of streets in Silver Bluff, a Miami neighborhood north of Coconut Grove and east of Coral Gables. The city recently placed concrete barriers on five side streets in Silver Bluff to prevent cars from using the neighborhood to circumvent heavy traffic on nearby Coral Way, but the county forcibly removed the barriers, igniting an intense feud.

At a press conference Monday, Carollo railed against what he sees as county overreach and said he had conferred with another local politician about seceding from Miami-Dade altogether.

According to local news blogger Elaine de Valle of Political Cortadito, who attended the press conference, Carollo said he'd spoken with Hialeah Mayor Carlos Hernández about leaving Miami-Dade County and forming a new county consisting of just the cities of Miami and Hialeah.

Local
Community
Journalism
Support the independent voice of Miami and help keep the future of New Times free.
Support Us


"He said that out of frustration with Miami-Dade County, he had spoken to Carlos Hernández about forming their own county and calling it 'Miami County,'" de Valle tells New Times.

Elaine de Valle
@newschica
At a press conference on the edge of Silver Bluff, #Miami commissioner ⁦@JoeCarolloNow⁩ said he talked to #Hialeah mayor about creating their own county. In other words, sedition from #MiamiDade. Because of #streetwars 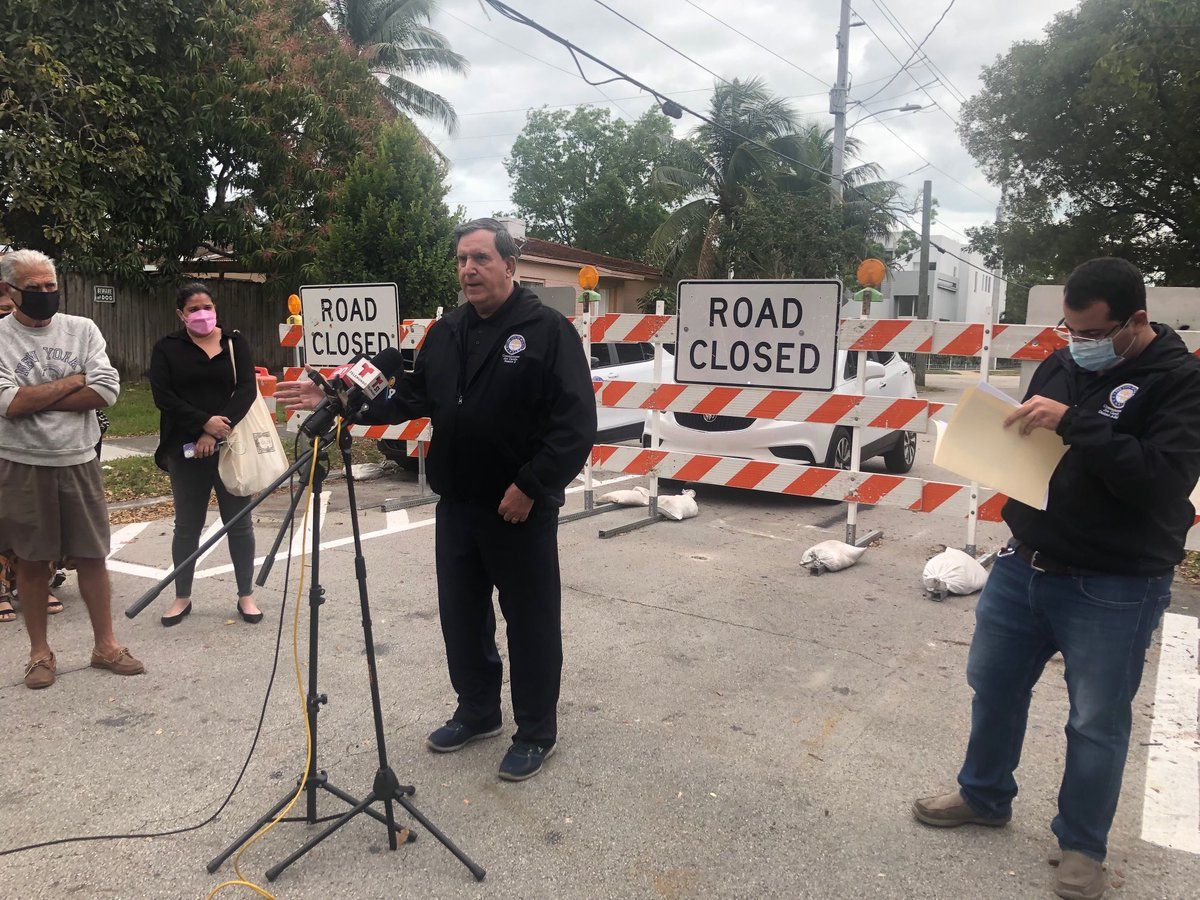 12:59 PM · Mar 8, 2021
26
8
Copy link to Tweet
To take Carollo's secessionist pipe dream as a serious proposition requires contemplating its major implications for South Florida's political landscape. Confusingly duplicative name aside, Miami County would be made up of two municipalities that exist within the borders of an existing county and don't even so much as touch one another, because Hialeah and Miami are separated by a hefty swath of unincorporated county land.

Carollo's idea was born over a petty fight that involves only a few blocks of his district.

In a March 3 letter to City of Miami Mayor Francis Suarez, Miami-Dade County Mayor Daniella Levine Cava implored the city to remove the "impromptu" barricades and go through the appropriate county processes for blocking streets. After a county crew removed the barriers, Suarez accused the county of stealing city property and said Cava should get a court order to remove the barricades.

The battle — which some on social media have dubbed #StreetWars — landed the two governments in county court. On Sunday, a judge ruled that the city could temporarily keep the streets blocked, provided that in the interest of safety, it swapped out the existing concrete barricades for plastic ones.

In a written statement to New Times, Cava said she was glad the court ordered the city to order the switch, but she still believes the city needs to go through the approved county processes if it wants to make permanent changes to its streets.

"I am committed to working with all our cities and residents to make improvements to improve our roads and traffic flow, but we need to follow the process laid out in the county code to ensure we are meeting important county standards and guidelines to keep all residents safe," Cava wrote.

While the Silver Bluff battle plays out in court, the tension has created a ripe moment for Carollo to rile up his constituents with one of the funniest ideas since... well, since January, when Elon Musk proposed a plan to build an underground tunnel to alleviate Miami traffic.

During the press conference, and in statements to other media outlets, Carollo lamented an alleged double standard between the county's actions in more affluent areas like Coral Gables, where Carollo says the city is allowed to block off streets, and poorer Hispanic neighborhoods like Silver Bluff, where the City of Miami apparently cannot.

When New Times texted Carollo to ask about his comments regarding secession, the commissioner responded with three bumblebee emojis. He did not respond to a follow-up text and phone call from New Times asking for elaboration.

Hernández, Hialeah's mayor, did not respond to calls or texts from New Times. But Hernández told Miami Herald reporter Aaron Leibowitz that he'd spoken with Carollo and was "watching" the situation between Miami-Dade County and the City of Miami.

Aaron Leibowitz
@aaron_leib
Just asked Hialeah Mayor Carlos Hernandez about this. He laughed. Said he did speak with Carollo, and said "we're watching" situation between Miami and county. Says he's believer in home rule for cities, but nothing serious has happened re: talks of a separate county.

Elaine de Valle
@newschica
At a press conference on the edge of Silver Bluff, #Miami commissioner ⁦@JoeCarolloNow⁩ said he talked to #Hialeah mayor about creating their own county. In other words, sedition from #MiamiDade. Because of #streetwars

2:12 PM · Mar 8, 2021
9
2
Copy link to Tweet
While it's unclear how serious Carollo was about creating some sort of Cuban-exile super government, it's far from the craziest thing the commissioner has said or done over the years. Sometimes referred to as "Loco Joe," the career politician has a reputation for controversy and turning personal grudges into political fracases.

While serving as a Miami police officer in 1979, Carollo was reprimanded for placing a Ku Klux Klan cartoon in the mailbox of a Black fellow officer as a "prank."

In 2018, Carollo made a racist joke against fellow commissioner Ken Russell, who is Asian-American, by comparing him to North Korean dictator Kim Jong-un. When confronted about the offensive remark, Carollo doubled down, saying both men had "bad haircuts."

Carollo has also engaged in a long-running public feud with the owners of the Little Havana bar Ball & Chain after they supported his political opponent in 2017. Owner Bill Fuller has accused Carollo of targeting his business with code complaints and legislative roadblocks, such as a recent outdoor music ban, as well as staking out his property. In one instance, he accused Carollo of yelling, "I am the law!" at a Ball & Chain employee.

In January 2020, several Miamians called for Carollo to be removed from office for allegedly breaking the law and abusing his public office while engaging in petty political fights. But the recall effort stalled, owing to a legal dispute over whether the group properly turned in a batch of signed petitions. That fight, much like the #StreetWars, is ongoing in county court.
KEEP MIAMI NEW TIMES FREE... Since we started Miami New Times, it has been defined as the free, independent voice of Miami, and we'd like to keep it that way. With local media under siege, it's more important than ever for us to rally support behind funding our local journalism. You can help by participating in our "I Support" program, allowing us to keep offering readers access to our incisive coverage of local news, food and culture with no paywalls.
Make a one-time donation today for as little as $1. 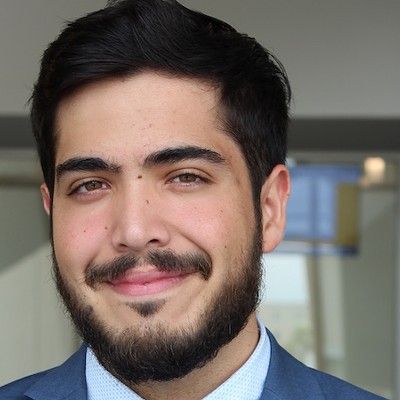 Don't Miss Out
SIGN UP for the latest news, free stuff and more!
Join Today