It's time to build: A New World's Fair

We must look to the past — to the World's Fairs — to build the future. 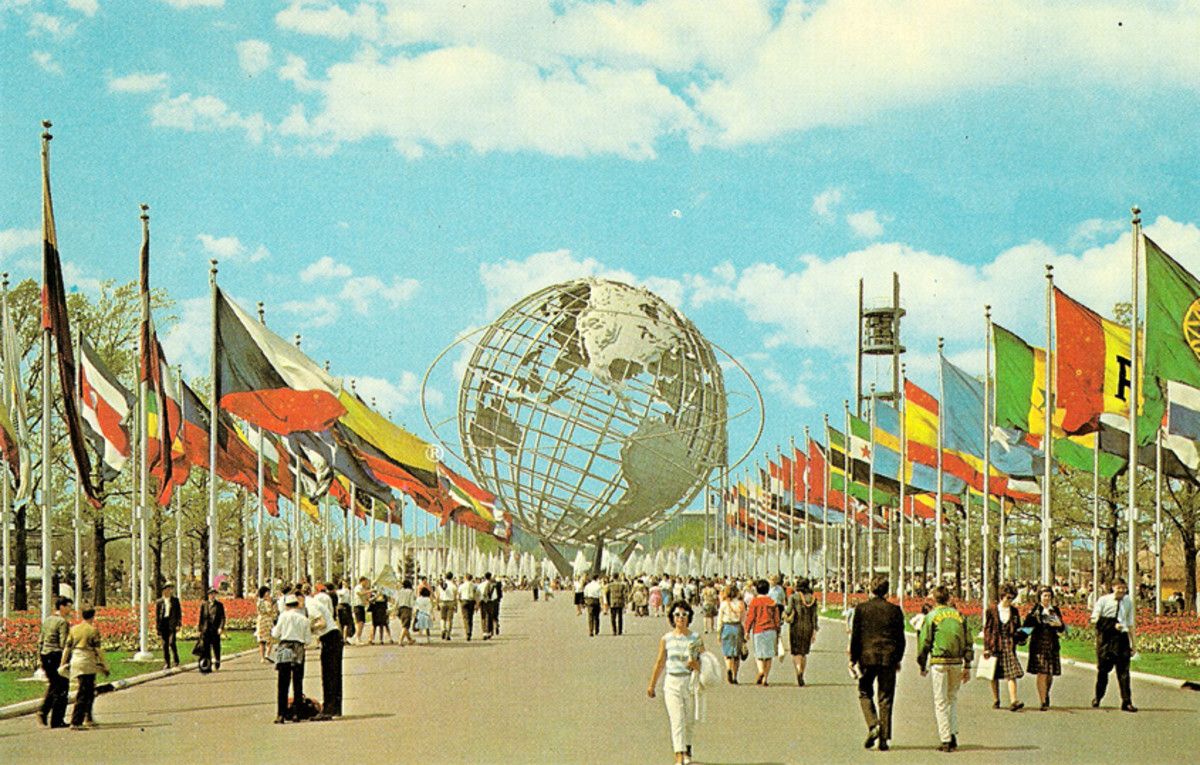 Stepping into the Past

It's 1965 and a brisk August breeze brings the flags of 80 nations to attention.

For months, you've watched as cranes and trucks transformed Flushing Meadows into the world of tomorrow. Now, flicking your ticket with impatient fingers, you step through the turnstiles of the New York World's Fair. You stand awestruck by the Unisphere and the epic NASA rockets, the Beatles' "Help!" plays live in the distance, and the scent of freshly griddled Belgian Waffles ignites your appetite.

Later, you wait in line with your friends for Disney's latest attraction, debating the exciting futures put forth by GM, Ford, and RCA. After a full day of shows, pavilions, and exhibits, you grab dinner in the Bavarian Village before riding the space elevator up the Observation Tower to take in the evening's fireworks. Finally, you head to a recreated Bourbon Street for some late-night dancing and you laugh with a group of tourists from Japan as you attempt to communicate.

At the end of the night, you head home to sleep, but your mind can't rest — the wonders of the future stir in your head. Landing on the moon now seems closer than ever and only the beginning of a limitless tomorrow.

While most have heard of the World's Fairs, few know how important they were in shaping our culture. Drawing more than 60 million guests in the 1960s alone, these 6-month long mega-events gave us a place to celebrate our achievements and experience the future up close and in person. They promoted a collective vision for a better world — reminding us how connected we were and how far we could go if only we went together.

The Fair's concept was invented by Great Britain in 1851, when "The Great Exhibition" of London unified Britons around the idea that technology was the key to unlocking a better future for their country. In 1889, Paris hosted the Fair, building the Eiffel Tower and showing 32 million guests the latest wonders of science and technology. Intent on one-upping Paris, Chicago hosted the Fair in 1893, drawing 27.5 million guests — nearly 40% of the U.S. population before there were cars, planes, or highways. Guests saw a city illuminated by electricity for the first time, marveled at the architecture that would inspire the City Beautiful movement, and rode the world's first Ferris Wheel.

In the decades that followed, World's Fairs continued to amaze guests from around the world. They debuted the steam engine, the telephone, the Model T and its assembly line, broadcast television, and touchscreens. They are responsible for symbols of progress that stand to this day, like the Eiffel Tower, San Francisco's Palace of Fine Arts, and Seattle's Space Needle. They spread the ideas of some of history's most influential people like Walt Disney, Amelia Earhart, Booker T. Washington, and Albert Einstein. They inspired millions of children, including Carl Sagan and Neil DeGrasse Tyson, to marvel at our universe and the cosmos.

Unfortunately, this all started to change after the U.S. put a man on the moon. While this was certainly a "giant leap for mankind," we lacked an understanding of what our next step would be. Without a new North Star to guide us, we stopped moving forward and our vision for the future began to fade. This all came to a head when the U.S. hosted its last Fair in 1984. Tired and dated, it ended in bankruptcy — symbolically extinguishing our hope for a collective vision of the future.

Standing in the Present

Today, World's Fairs have been rebranded as "International Expositions" that occur every 5 years, and are a hollow shell of their former glory. They no longer showcase the promise of the future or celebrate achievement. Instead, they serve as national branding exercises, infrastructure development projects masquerading as innovation, architecture competitions, and an opportunity to promote tourism. If anything, they're the perfect representation of our current vision for the future: unfocused and uninspiring.

The world has changed dramatically since 1984. We now live in the most incredible time in human history. The internet has brought billions of people together and tech companies have given us supercomputers in our pockets. We're starting to build hyperloops and supersonic jets. We're on the cusp of incredible breakthroughs in genetics, biology, medicine, food science, energy, transportation, manufacturing, computing, and robotics. We're finally going back to the moon and then on to Mars. We've once again seen the power of a collective vision with the record-breaking development of the COVID-19 vaccine.

We now have the tools, resources, and means of coordination to reach heights that seemed impossible just four decades ago. Imagine the problems we could now solve and the feats we could achieve if we began to pursue a new, collective vision for the future.

And to arrive at this vision, we must have a global conversation about the world we want to live in. However, holding that conversation today is even harder than in the past. The digital dominance of the 21st Century has sorted us into our own tailored versions of online reality, where we drown in ads and information. It's overwhelming, noisy, and ephemeral. It's hard to have a simple conversation, let alone align the globe on a future worth building.

This is why we must look to the past — to the World's Fairs — to build the future. By stepping out of the virtual world and into the physical one, we can literally create common ground for the people of the world to discuss nuance, and channel their focus — at scale.

Through compelling pavilions and exhibits, awe-inspiring art and architecture, and incredibly immersive experiences, we can design a physical space where everyone can feel, touch, and see the future. We can take advantage of our existing digital infrastructure and the latest virtualization technologies to deliver a complementary experience that spreads the future to billions of people, allowing voices from all walks of life to participate in the conversation. We can build a new World's Stage — the intellectual equivalent of the Olympics — where heroes and role models are created, where dreams are born, and where we celebrate achievement over superficial influence. We can build a new medium that keeps us pointed towards a North Star: helping us find our next great step, focus on it, and celebrate its achievement together.

Stepping into the Future

For months, you've watched livestreams of cranes and trucks sculpting the landscape into a world of wonder. Now, flicking your wearable token with impatient fingers, you feel a slight force as your Hyperloop pod comes to a stop. The door slides open to reveal the Tree of Life — a 900-foot tall work of art made from carbon dioxide that's been reclaimed from the atmosphere. You walk towards its center and begin to notice the images of every known species flickering on its branches. You meet your friends, shake hands, hug, and then step through the Tree's portal gate.

You leave today and enter the world of tomorrow.

In this world, you explore the depths of our oceans, take a mission to Mars, and travel back in time to the 1893 Chicago World's Fair recreated in VR. You tour the geothermal plant powering the Fair, see the 3D-printed homes of tomorrow, and watch synthetic organisms decompose the plastic polluting our oceans. You meet the bright minds of tomorrow at the World's Science Competition, watch de-extinct wooly mammoths play, and cheer researchers as they debut the cure for aging.

You grab dinner made from ingredients grown at the Fair's cellular meat lab and vertical garden. You sit down at a table with other guests from around the world to laugh, share stories, and talk about the future — your words translated to each other in real-time.

The clock strikes 10 PM, the lights dim, and a livestream projects into the sky. Your eyes turn upward. Everyone at the Fair, and the millions watching from VR headsets at home, wait eagerly for Jessica Watkins to take the first step on Mars.

She does and the world erupts in celebration.

At the end of the night, you catch a ride home in a driverless taxi. With your forehead pressed against the glass, you can't help but feel a renewed sense of wonder. The challenges of our day no longer seem like impossible feats to retreat from, but exciting problems to solve. You can't wait to see how much we achieve by the next World's Fair and what you can do to be a part of it.

Want to help build it?

It's going to take a movement to build the New World's Fair. We'd love to find ways to get you involved.

Subscribe for 1-2x a month emails with updates, discussion times, and events.

We won't send you spam. Unsubscribe at any time.

If so, I'd be really grateful if you shared it.
3k Shares