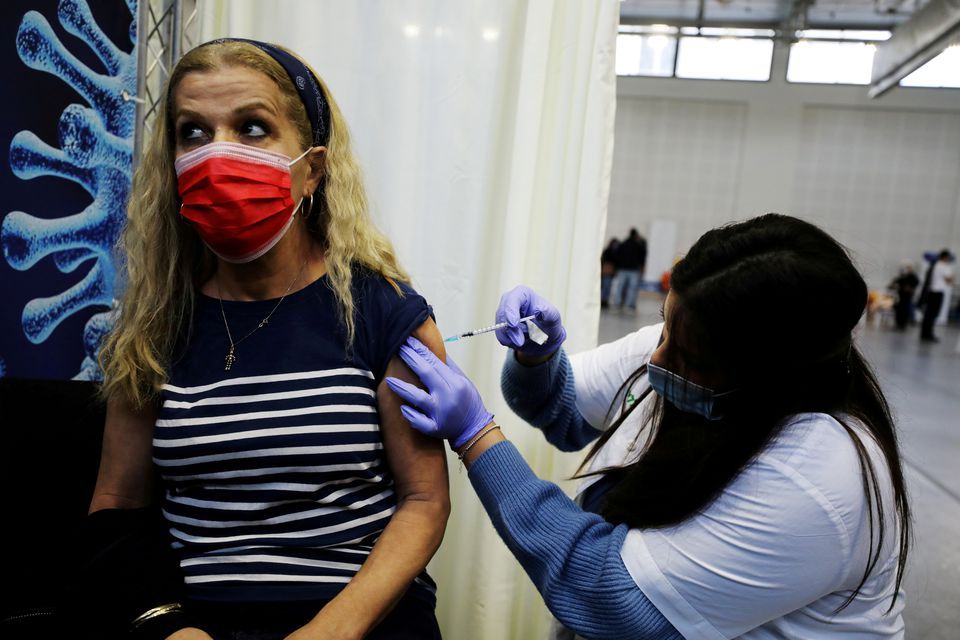 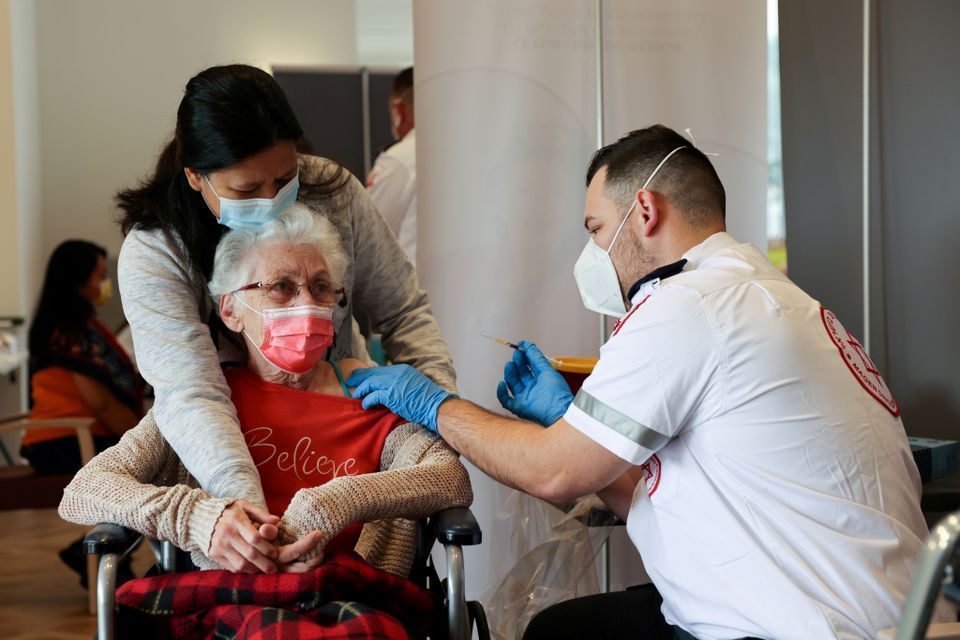 An elderly woman receives a booster shot of her vaccination against the coronavirus disease (COVID-19) at an assisted living facility, in Netanya, Israel January 19, 2021. REUTERS/Ronen Zvulun/File Photo

JERUSALEM, July 11 (Reuters) - Israel said on Sunday it will begin offering a third dose of Pfizer Inc's (PFE.N) vaccine to adults with weak immune systems but it was still weighing whether to make the booster available to the general public.

The rapid spread of the Delta variant has sent vaccination rates in Israel back up as new infections have risen over the past month from single digits to around 450 a day, and the country has moved to fast-track its next Pfizer shipment.

Health Minister Nitzan Horowitz said that effective immediately, adults with impaired immune systems who had received two doses of the Pfizer vaccine could get a booster shot, with a decision pending on wider distribution.

Pfizer and partner BioNTech SE , the main suppliers in a swift Israeli vaccination rollout that began in December, said on Thursday they will ask U.S. and European regulators within weeks to authorize booster shots.

The two companies cited an increased risk of infection after six months in seeking permission for a third shot.

Drawing criticism from some scientists and officials, the companies did not share the data showing that risk, but said it would soon be made public. They also cited recent Israeli data. read more

"We are examining this issue and we still do not have a final answer," Horowitz, speaking on Kan public radio, said about a booster for the general population in Israel.

"In any case we are administering as of now a third shot to people suffering from immunodeficiency."

About half of the 46 patients presently hospitalised in Israel in severe condition are vaccinated, and the majority are from risk groups, according to the health authorities. About 5.7 million out of Israel 9.3 population has received at leas one dose.

Israel was not going to rush into any decision on booster shots for the general public, Sharon Alroy-Preis, head of public health at the Health Ministry said.

"It's rather complex. We're presently seeing outbreaks largely among children and their parents who weren't necessarily vaccinated in January and February and we need to identify the (statistical) biases," Alroy-Preis told Kan.

It was still unclear, Alroy-Preis added, whether the vaccine was simply less effective against the Delta variant and if illness rates among those vaccinated in January and February were higher than for those who were inoculated later.

Prime Minister Naftali Bennett said in broadcast remarks to his cabinet on Sunday that he has agreed with Pfizer to bring forward the next delivery of doses to Aug 1. The shipment had been widely expected to arrive in September.

There was no immediate response from Pfizer to a request for comment.