The Pandemic Will Be More Deadly This Year

Consider the surging case count in India. A false sense of complacency is discouraging any course correction, and numbers could get worse still. 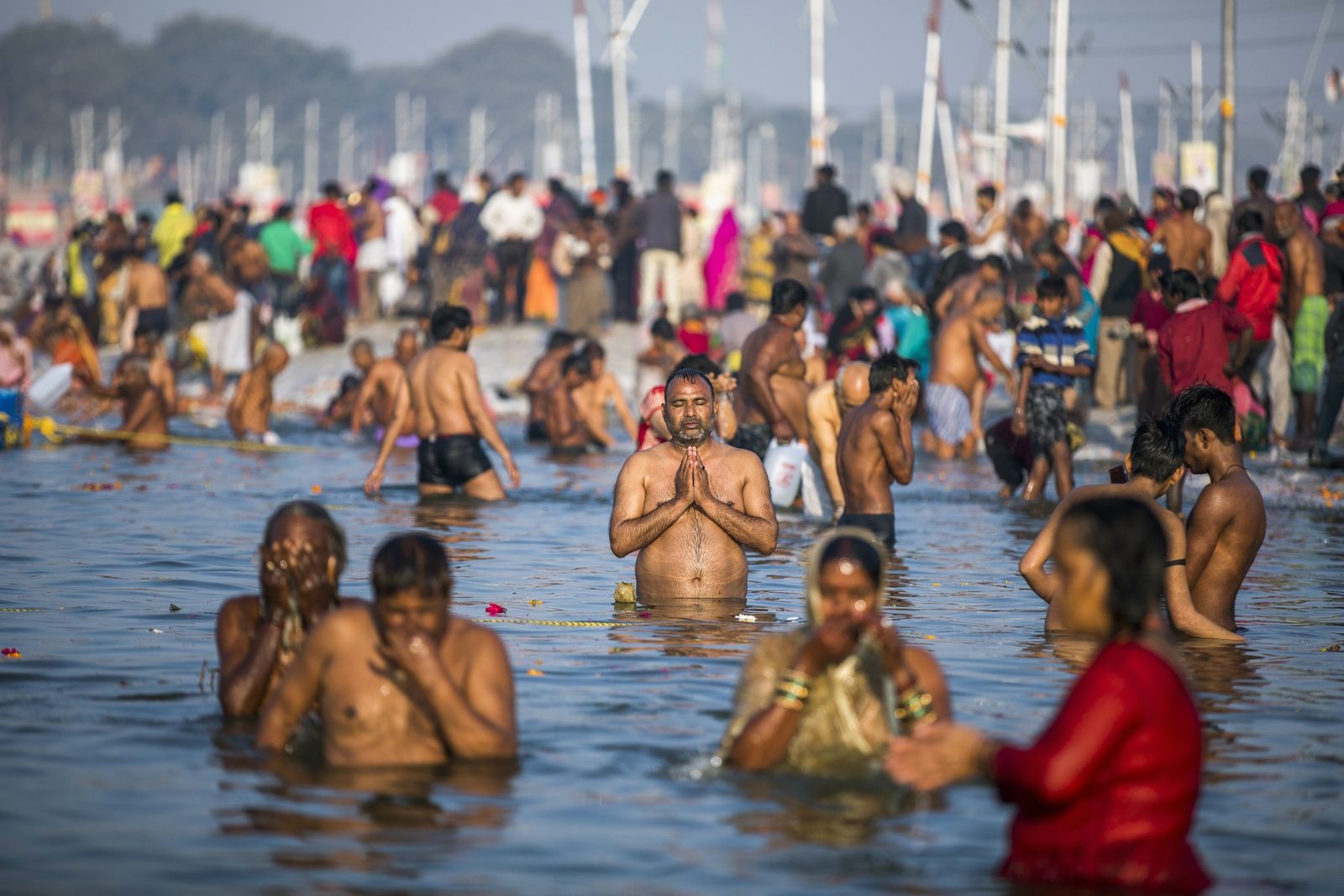 A hope and a prayer.

Photographer: Prashanth Vishwanathan/Bloomberg
David Fickling is a Bloomberg Opinion columnist covering commodities, as well as industrial and consumer companies. He has been a reporter for Bloomberg News, Dow Jones, the Wall Street Journal, the Financial Times and the Guardian.
Read more opinionFollow @davidfickling on Twitter

Covid-19 is going to kill more people in 2021 than it did last year. If you want to see why, look at what’s happening in India.

Cases have been surging in the country of 1.37 billion people. On Sunday alone, 261,500 new infections were recorded. That’s as bad as the U.S. during all but the worst five days of the pandemic in December and early January. Case counts are rising far more quickly, too. Average infection numbers over the past seven days have run at nearly three times the level two weeks ago, a pace of growth that the U.S. last saw in the early days of the outbreak a year ago.

The real numbers may be yet higher. The city of Bhopal used Covid-19 protocols to cremate or bury 84 people last Tuesday, according to the Hindustan Times, while declaring only five Covid deaths. The B.1.617 variant, which isn’t well understood yet, has features associated with higher infection rates and lower antibody resistance. It's turning up in more than half of viral samples taken in India.

As caseloads push medical facilities toward capacity, the health system itself is starting to crack. Vaccine stocks, hospital beds and even oxygen supplies are running short, leading to bitter arguments between the states and the federal government. In some places, the dead are being transported by truck because cities have run out of hearses. Elsewhere, crematoria have started to break down because of the sheer number of bodies being burned. The government Monday promised to open up vaccines to all people over the age of 18.

If things don’t change soon, the country will be facing 3,000 deaths a day — twice its current level, and 10 times what was being seen through most of this year — Bhramar Mukherjee, a biostatistician at the University of Michigan, wrote last week.

India's daily case count is already ahead of the worst the U.S. saw on a weekly average basis, and shows no sign of slowing

More from
So Long to Walter Mondale, One of the Greats
No Bailout for Rental Cars, Now Customers Pay for It
Trump Blazed a Trail That Clears the Way for Biden
The Billionaire Takeover of European Football

As my colleague Mihir Sharma has written, arrogance, hyper-nationalism and incompetence helped foster a fatal sense of complacency amid India’s apparent success against the outbreak earlier this year. Until a few weeks ago, lockdown restrictions had been progressively loosening for months. Cinemas were allowed to open to full capacity Feb. 1. Health Minister Harsh Vardhan declared the country "in the endgame of the Covid-19 pandemic" in early March, at almost precisely the point that cases started to surge again.

Worryingly, the clear signs of a second wave haven’t prompted much course correction since. With elections underway in the states of Assam and West Bengal, the Twitter feed of Prime Minister Narendra Modi has been interspersing updates about the virus with Trump-style footage of him, unmasked, addressing mass rallies: 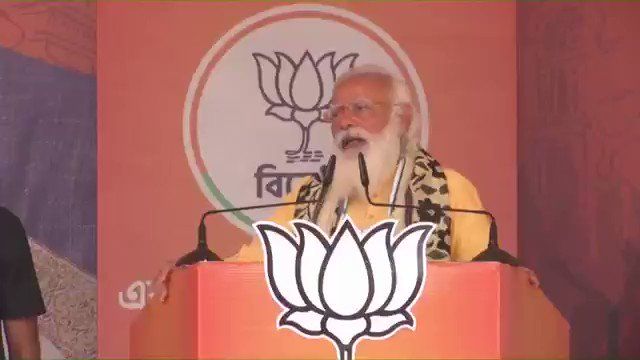 The other side isn’t necessarily doing much better, either. West Bengal’s chief minister, an opponent of Modi’s BJP, only got around to canceling her campaign rallies Sunday.

Worse may be to come. The Kumbh Mela, a Hindu pilgrimage festival that’s normally the largest mass gathering on earth, is now underway on the banks of the Ganges, attended by an estimated 3.5 million people. That’s well down on the numbers in a normal year, and even Modi, far too late, urged over the weekend that the event be purely "symbolic" rather than physical. Still, it’s far above the mere thousands allowed to other mass events like last year’s Hajj in Saudi Arabia and Arbaeen pilgrimage in Iraq.

Even held outdoors, such events carry a profound risk of spreading the most infectious variants to every corner of the country. Close to 10% of people returning to Gujarat’s largest city, Ahmedabad, from the festival tested positive for Covid over the weekend, the Press Trust of India reported Monday. Hitherto, the coronavirus has mostly hit the relatively affluent, urbanized parts of the country that are best able to cope with it, such as the southern states of Kerala and Karnataka, the capital Delhi, and Maharashtra, home to Mumbai. If the Kumbh Mela seeds it in rural districts, where the majority of India’s population lives, the death toll could be higher still.

There’s a lesson in this for the world. The 1.2 million people who’ve died from Covid so far this year already represent about two-thirds of the 1.8 million fatalities in 2020. Yet people are behaving as if it’s already over. That's removing the sense of unified urgency that led many nations to make such strides in turning around the pandemic last year.

Opinion. Data. More Data.Get the most important Bloomberg Opinion pieces in one email.
Email
Please enter a valid email address
By submitting my information, I agree to the Privacy Policy and Terms of Service and to receive offers and promotions from Bloomberg.

Vaccine supplies for the richest (and, thanks to global initiatives, poorest) countries are relatively ample. Yet those for middle-income nations, where the majority of the planet’s population lives, are grossly inadequate, blocked by restrictive patent rules. India, with one of the world’s largest pharmaceutical industries, is far better placed than most midsize economies to cope, but even it is crumbling under the strain.

The more people infected in emerging countries while the rest of the world looks away, the more opportunities Covid-19 will have to develop into fresh strains and prolong this death and misery. We must do better. The globe is still under attack, but our defenses are in disarray.

(Updates fourth paragraph with the government’s plans to open up vaccines to more people. Corrects Modi’s title in seventh paragraph.)

This column does not necessarily reflect the opinion of the editorial board or Bloomberg LP and its owners.

To contact the author of this story:
David Fickling at [email protected]

To contact the editor responsible for this story:
Rachel Rosenthal at [email protected]

Have a confidential tip for our reporters?
GET IN TOUCH
Before it's here, it's on the Bloomberg Terminal.
LEARN MORE
UP NEXT
We Have Good News and Bad news About Covid Vaccines