A bell strikes six on a late-summer evening in the central square in Huanggang, where residents sit barefoot on the stone steps of the ancestral hall. The surrounding streets are alive with commerce. Eateries offer roast duck and bowls of pork-and-noodle soup. People in flip-flops whiz by in electric scooters. But look above those huge trees near the old shrine: rising up is a sleek steel-and-glass skyscraper. That’s Huanggang Commercial Tower — and the village owns a piece of it. A stake in that 62-storey building, home to a luxury hotel and a shopping mall, is only part of the village’s sprawling portfolio. Like pros on Wall Street or in the City of London, most of the Shenzhen villages have embraced a cardinal rule of today’s global investor: diversify. Huanggang, known locally as Little Hong Kong, also owns the Shenzhen Futian Asta Hotel, the Wong On office building and a small stake in a local bank, among other assets. 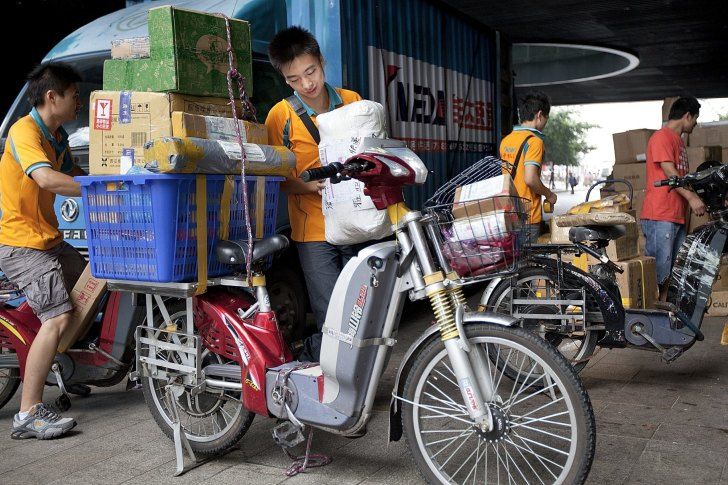 In 1980, Communist China declared Shenzhen its first capitalist-friendly "special economic zone." Today the villages — enclaves with names like Huanggang and Futian — literally sit on some of the most expensive real estate anywhere in the world.Credit:Bloomberg

Huanggang traces its history back six centuries. Before the 1980s, its people eked out a living from fishing and rice-farming. Before that, in the early days of the People’s Republic, many plunged into nearby Deep Bay and swam for the British colony of Hong Kong. The ones who stayed, along with their descendants, are considered "original" villagers: they bear that coveted 44030 on their IDs. All of them are members of the Zhuang clan.

Four bronze bulls stand near the centre of this urban village, in tribute to the Zhuang known here as "Cowboy." His real name is Zhuang Shunfu, and he was the village chief who first made Huanggang rich. In multiple calls to the village corporation, Zhuang, said to be 71, declined to be interviewed for this article.

His story is something of a local legend. The Chinese real estate tycoon Wang Shi recalled in his autobiography how, in the late ’70s, the enterprising Cowboy peddled him around Shenzhen on the back of a bicycle. Huanggang was a backwater then: Cowboy, like most everyone else, lived in a house with threadbare furnishing, an iron wok and a wood-burning stove. But when Shenzhen embraced the market, so did Cowboy. He quickly formed teams of truckers to collect sand from the Shenzhen River for use in concrete, according to The Shenzhen Experiment a book by Du Juan, an associate professor at the Hong Kong University. He built industrial ventures and invested the money that the government paid the villagers for land in apartment towers, office buildings and shopping malls. Huanggang also worked with major real-estate developers on several landmark high-rises.

Part of Cowboy’s story is enshrined at the village library. In a letter he wrote in 2010 to Wen Jiabao, then China’s premier, Cowboy recalled Huanggang’s centuries of poverty.

"After the inception of Shenzhen economic zone," he wrote, "we washed our feet and walked away from the paddy field."

Today at one end of the village square, beyond the library and the wet market, Cowboy’s son, Zhuang Chuangyu, presides at the headquarters of the village corporation, Shenzhen Huanggang Industry Co. The younger Zhuang, educated in Canada and the UK, has been running operations since 2007 and, among other things, he’s teamed up with real-estate developer, Excellence Group, on the towering Excellence Century Plaza.

The financial affairs of these villages have not always been transparent — a recipe for corruption in some quarters of Shenzhen. In recent years the Shenzhen Discipline Inspection Commission has investigated or taken action against 40 chairmen of village-owned joint stock firms. Some village officials have been accused of bribery, others of gambling away money. Since 2018, the commission has been tightening up.

Leaders in Huanggang and the other villages all declined to be interviewed for this article. The few times they’ve spoken to China’s state-run media, they’ve attributed their success to hard work, good leadership and a commitment to providing for everyone in their villages.

The Zhuangs tend to trust their village company to keep clan’s fortune growing, if only because the money has always flowed. As stakeholders in the village businesses, all Zhuangs collect annual dividends. In recent years, villagers say, the payouts have totalled about 20,000 yuan ($US3,100) for every man, woman and child, the equivalent of about 30% of average Chinese household’s entire annual income.

Why Wall Street giants are still in love with China

The dividends are just the beginning. As original villagers, many Zhuangs are landlords in a city of tenants. They own much of the housing in Huanggang and collect rent from the new arrivals who’ve been flocking to Shenzhen and driving prices through the roof.

Harry Zhuang, 25, is one of the lucky ones. His family owns a pink-tiled, 12-story building in Huanggang. It is home to dozens of small apartments and shops. Flats like these serve as landing spots for migrants from other parts of the country. Ones like these go for 3,000 yuan ($US463) a month in Shenzhen — more than many people in rural China take home.

Shenzhen is now the least affordable city on the Chinese mainland. Rent devours nearly 44 per cent of the average worker’s income. That’s not far behind Hong Kong, the least affordable city in the world. Only two years ago, the technology giant Huawei announced plans to build housing for 30,000 employees in Dongguan, 40 minutes away by bullet train. Rents there are about a fifth of what they are here. The Beijing government, meantime, has selected the rich coastal province of Zhejiang, to the north, to test various ways to redistribute income. That could be a sign of things to come elsewhere.

For now, the gap between China’s have’s and have not’s – in Shenzhen, often between the villagers and newcomers – keeps growing. Each of the 12 floors in that pink building has been cut up into several tight units. Rents net Harry Zhuang’s family of four and his other relatives more than 2 million yuan a year. That’s on top of the dividends they collect from the village corporation, plus any income from other work.

"Things are changing very fast," Harry Zhuang says. His father’s generation dreamed of escaping to Hong Kong, now part of the PRC. "We don’t need to go through such hardships, and we are much better off."

Zhuang adds: "I think we are very lucky." 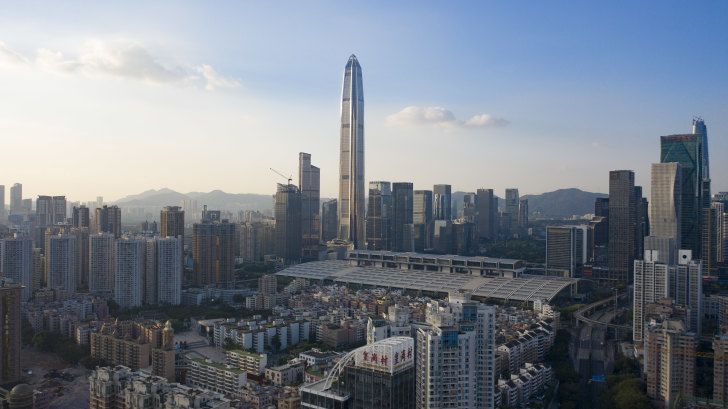 The economy of Shenzhen, a city that scarcely existed 40 years ago, is bigger than all of Norway’s.Credit:Bloomberg

Huanggang villagers could be in for another big windfall. The Excellence Group, the big developer, is planning to buy up land in Huanggang for a huge urban renewal project. At going prices, Harry Zhuang’s family’s pink building is worth, on paper, an estimated 240 million yuan.

In Yulv, another other urban village, members of the Zeng clan collect about 100,000 yuan apiece in dividends annually. Many young people there have cushy jobs at the village corporation. As in other villages, some there are reluctant to discuss their family backgrounds for fear of antagonising those less well-off. One 24-year-old Catherine Zeng, a social worker, recalled that one potential employer rejected her job application simply because she was a villager.

The financial affairs of these villages have not always been transparent — a recipe for corruption in some quarters of Shenzhen.

When she finally landed another job, her new boss was incredulous that she was willing to work. "Why don’t you just go home and collect rent?" he told her. The woman’s immediate family owns two apartment blocks. The four of them together collect 400,000 yuan in village dividends.

It’s Tuesday night and the Evening Show is hopping. The venue, on the ground floor of the Huanggang Commercial Tower, feels like a mashup of 2001: A Space Odyssey, and Saturday Night Fever. The young crowd is a sea of black T-shirts and jangling jewellery. On this September night, they’re prepared to pay hundred dollars for a table and up to 15,800 yuan ($3,311) for a bottle of Armand de Brignac champagne. Two DJs keep the beat. Security guards hover. Female models can be hired to join the table.

The man behind the bar, in a fedora and sunglasses, is a Belarusian who says his name is Danny. He assesses the crowd.

To some, the villagers of Shenzhen — some of them partying here tonight, if Danny is right — symbolise the success of this hyperkinetic, modern city. When others ran, their forebears stayed, and have reaped the rewards of southern China’s explosive growth. Nowadays, the economy of Shenzhen, a city that scarcely existed 40 years ago, is bigger than all of Norway’s.

Others are less charitable. As people from all over China have poured into Shenzhen, many have struggled to find a footing. Authorities have taken notice. In February, Shenzhen became the first city in China to cap prices of existing homes. Since then, investors around the world have been watching China’s property market with growing anxiety. China Evergrande Group, the huge and highly indebted property company, is in trouble. The country’s top banking regulator has warned that people who think Chinese home prices can never fall are sorely mistaken.

Zhiwei Zhang, the chief economist at Pinpoint Asset Management in Shenzhen, says China must strike a fine balance. Yes, the government wants to make housing more affordable for everyone. But it also wants to avoid anything that might send prices into a tailspin.

"You have to balance the interests of homeowners and homebuyers," Zhang says. "That’s tricky."

In the meantime, Shenzhen’s newcomers look on in envy. One recent arrival, 28-year-old May Zhang, says she doesn’t begrudge the city’s villagers their good fortune. "I just wish my grandparents had the same vision and moved here decades ago," she says.

The Business Briefing newsletter delivers major stories, exclusive coverage and expert opinion. Sign up to get it every weekday morning.