How Stanford Came to Dominate the Landscape in Silicon Valley 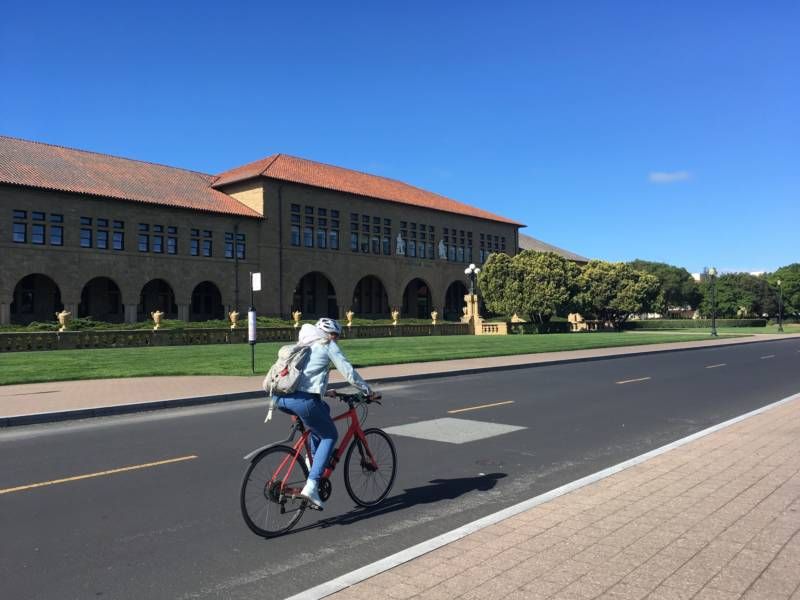 On campus and off, the value of Stanford’s real estate empire tops $19.7 billion, as of 2018. (Rachael Myrow/KQED)

The Leland Stanford Junior University is as beautiful as it is big: replete with huge palm trees, Romanesque-inspired sandstone buildings, concert halls, art galleries and a football stadium that seats 50,000 people. But in the midst of a housing crisis some say Stanford helped create, locals are asking if the university is doing enough to house those it employs.

At the top of the list in terms of property value: Stanford. The value of the university's holdings is greater than those of Google, Apple and Intel combined.

On campus and off, the value of Stanford’s real estate empire tops $19.7 billion, as of 2018. That’s probably an undercount because Proposition 13, California’s landmark property tax law from the 1970s, has held down the reported value of a lot of Stanford’s properties.

"You can drive for miles and still be on Stanford land. I mean, it’s got a golf course. It’s got a nature preserve. The Stanford Linear Accelerator is operated by the federal government, but it's on Stanford land," said Steve Staiger, a historian with the Palo Alto Historical Association.

In recent years, as the region's housing crisis has metastasized, a growing number of community voices are asking whether Stanford's size comes attached to a greater responsibility to house its faculty and staff. "Stanford certainly has, in many people's eyes, a responsibility to do their fair share," Staiger said. "Now, what they think is their fair share and how that's being handled? It's different than others because they have space on their lands for housing." 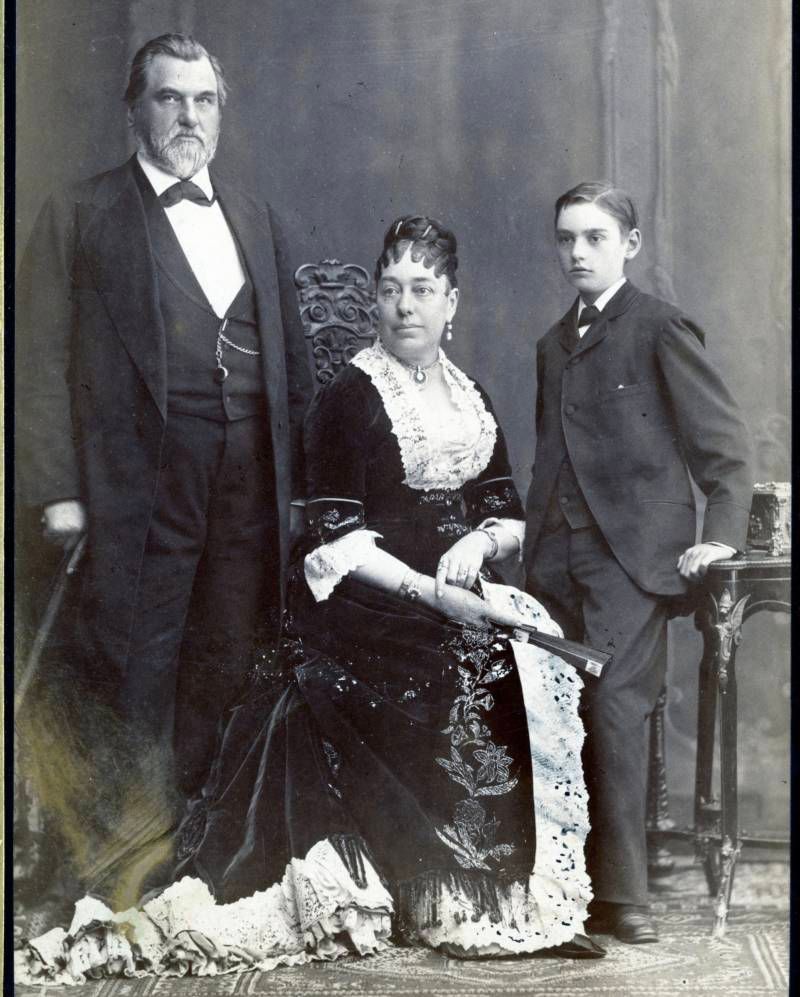 How Stanford Came to Be So Big

Stanford has one of the largest campuses in the country and sits on roughly 8,180 acres straddling the border of two counties. UC Davis, for comparison's sake, is just 5,300 acres.

As every visitor who takes a campus tour learns, the university was founded by a grieving father who dedicated the school to his son.

Amasa Leland Stanford was one of the "Big Four," a group of California merchants who banded together to build the western portion of America’s first transcontinental railroad, the Central Pacific, with generous support from state and federal governments.

Stanford lived lavishly off the profits of his railroad. He joined an exclusive coterie of ultra-wealthy people and owned both a mansion on Nob Hill in San Francisco and a country estate south of the city. He grew grapes and raised horses on a stretch of land that grew to rival the rancheras of the Spanish colonial era.

He might have faded into history if not for a tragedy that struck the family in 1884 when his 15-year-old son, Leland Jr., died of typhoid fever while touring Italy.

With no heir to pass on all their wealth to, the grief-stricken parents decided to launch a university. In 1885, they donated their land to a new school — with the unusual stipulation that it could never be sold. 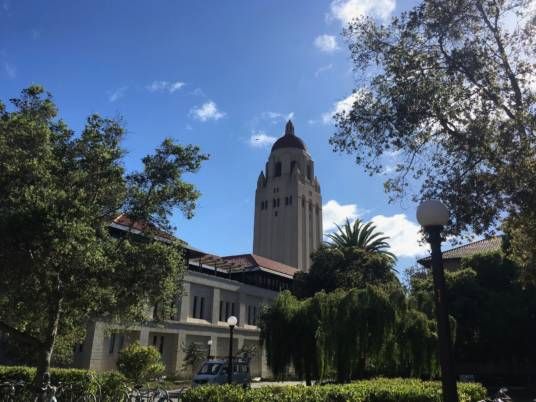 The Hoover Tower on Stanford University campus houses the Hoover Institution Library and Archives, which were founded by Herbert Hoover before he became president of the United States.

For decades following, this edict guaranteed Stanford would be land rich in an area many considered the boonies. To this day, one of Stanford's nicknames is "The Farm."

It wasn't until the 1950s that Stanford officials devised a plan to lease out land they couldn't sell.

"[Stanford] Shopping Center is on leased land," said Staiger. "The [Stanford] Research Park is on leased land." The leasing deals allow Stanford to generate income without selling the land, which they're prohibited from doing by the 1885 founding grant.

Then a man named Fred Terman helped launch what we now call Silicon Valley, first as an electrical engineering professor and then as provost at Stanford. Terman was one of the first to encourage tech talent and businesses to stay close to campus rather than seek fame and fortune elsewhere.

Today, Stanford boasts an endowment of $27.7 billion, which puts it near the top in the U.S., behind Harvard and Yale.

'Stanford certainly has, in many people's eyes, a responsibility to do their fair share. Now: what they think is their fair share and how that's being handled? It's different than others because they have space on their lands for housing.'—Steve Staiger, a historian with the Palo Alto Historical Association

With the help of Hewlett-Packard, Cisco, PayPal, Google, Yahoo, Netflix and others, the center of gravity for tech companies gradually shifted from the East Coast to the West Coast.

Year after year, Silicon Valley companies draw in tens of thousands of software engineers, lawyers and other professionals. Not all of them make huge salaries, but in recent years, the economic influx has displaced thousands of people who do not work in tech, forcing them to leave the Bay Area. A quick search on the real estate platform Zillow reveals the median home price in Palo Alto is $2,833,400.

"You can see people living in vehicles on the streets," said Lenny Siegel, former mayor of Mountain View. "School districts are losing teachers. It's gotten worse because we've had this unprecedented employment growth and very little housing development."

The Stanford Research Park is home to more than 150 different companies and their 23,000 employees. The university itself directly employs about 13,028 staff members, plus another 2,240 faculty members as of 2018.

"We had faculty housing on campus from the very beginning, to provide an opportunity for faculty to be close to the education and research mission of the institution," said Martin Shell, Stanford's vice president and chief external relations officer. "And we think that we’ve been following in that tradition for the last 125 years." 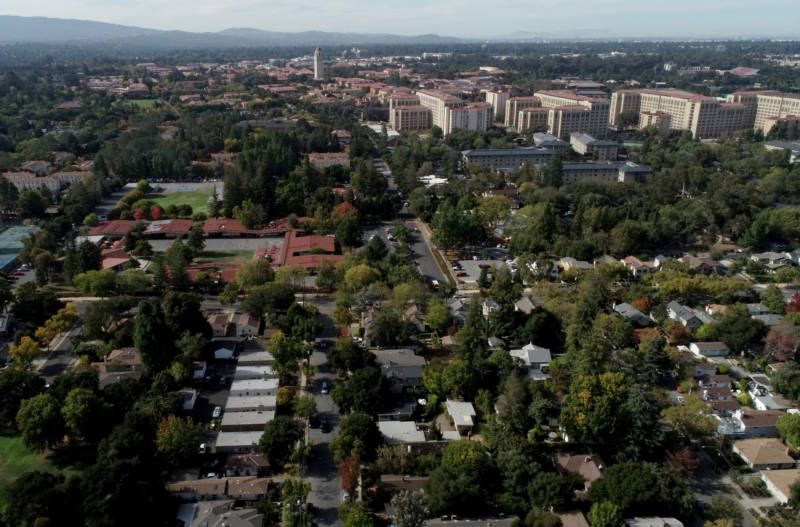 Stanford's campus spans 8,180 acres in San Mateo and Santa Clara counties and is one of the largest in the country. (Courtesy of Jane Tyska/Bay Area News Group)

"They [Stanford University] are the major employer on the Mid-Peninsula both for the university faculty and staff, but more importantly perhaps, numerically, is the Medical Center. It's a huge employer, so big that now they have a separate plant out in Redwood City that thousands of people are working at," historian Staiger said.

Stanford officials told our investigative reporting team they plan to build about 1,300 housing units and more than 2,400 beds for graduate students, at an estimated cost of more than $1 billion.

"We did that for many reasons, not the least of which was our graduate students were increasingly having a challenge to find a place to live in close proximity where they could afford to live here," said Shell.

When an apartment complex in the works, the expanded Escondido Village Graduate Residences, opens in about a year, Stanford will house more than 75 percent of its graduate students on its campus. The university already houses all of its undergraduates on campus.

Some may ask why building more housing is Stanford’s problem when Mountain View, Palo Alto and other nearby cities also haven’t kept pace with growing demand over the last half-century. Or, for that matter, whether it's a problem for tech companies in the region to solve.

In recent months, tech titans like Google and Facebook have announced major initiatives to help build housing for their employees and others, providing a combination of cash and land as incentives and asking local municipalities to help shape their housing plans.

That shift in the public conversation is putting Stanford in the spotlight for a growing number of local politicians and housing advocates. "Stanford has more land than the city of Mountain View," said Siegel. "Yeah, they’re a big institution and they do a lot, but they need to do more."

Stanford leases homes to faculty at prices well below market rates — it’s one of the ways Stanford attracts top academic talent from around the world that might not otherwise move to the region.

'Probably most of Silicon Valley wouldn't exist without Stanford. On the other hand, there are definite downsides.'—Pria Graves, College Terrace Residents Association

For decades, the university's concerns about housing affordability have focused largely on faculty, as opposed to staff — or the communities that neighbor Stanford. A university-led Affordability Task Force is expected to deliver recommendations later this year that expand Stanford's definition of constituents.

But in the meantime, Stanford has been busy expanding its residential real estate portfolio off-campus. For example, in just the last five years, the university has bought more than 30 properties in a neighborhood near the campus called College Terrace.

Pria Graves, a retired software engineer from Palo Alto, has lived in College Terrace for 34 years. She’s the College Terrace Residents Association's "Stanford observer." She argues that Stanford's choice to absorb properties off-campus to secure housing for its employees is drying up the pool of available housing for others in the community. That, she says, drives local housing prices past already stratospheric levels.

Those downsides are at the center of a contentious battle with Santa Clara County supervisors. After three years of back and forth over Stanford's proposed plans to build another 3.5 million square feet in the coming years, the university abruptly withdrew its application last week.

In a statement, the university acknowledged "obstacles on the path to a successful permit" and committed to "a new phase of engagement and dialogue with its neighbors and surrounding communities." 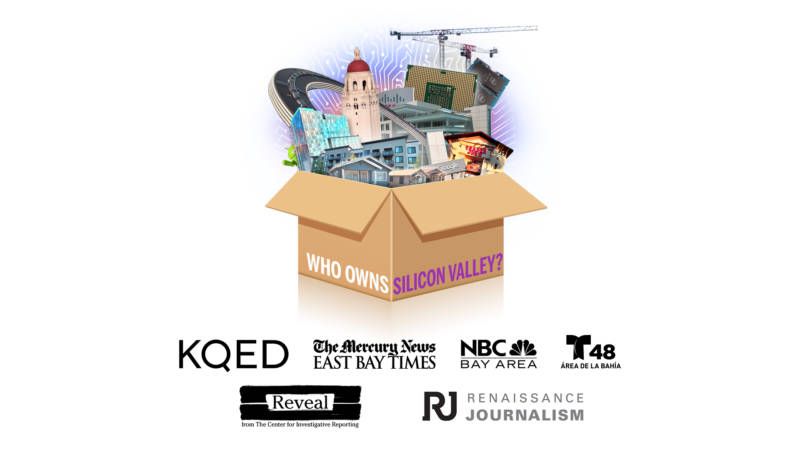 Stay in touch. Sign up for our daily newsletter.
Copyright © 2022 KQED Inc. All Rights Reserved. Terms of ServicePrivacy PolicyInside the Reporting ProcessContact Us