Devon's clippings   ·   Clipped: Mon-04-Jan-2021   ·   Original: bldgblog.com/2007/10/greater-los-angeles
I got back from Los Angeles last night and my head is still spinning. I’d move there again in a heartbeat.
There are three great cities in the United States: there’s Los Angeles, Chicago, and New York – in that order.
I love Boston; I even love Denver; I like Miami; I think Washington DC is habitable; but Los Angeles is Los Angeles. You can’t compare it to Paris, or to London, or to Rome, or to Shanghai. You can interestingly contrast it to those cities, sure, and Los Angeles even comes out lacking; but Los Angeles is still Los Angeles. 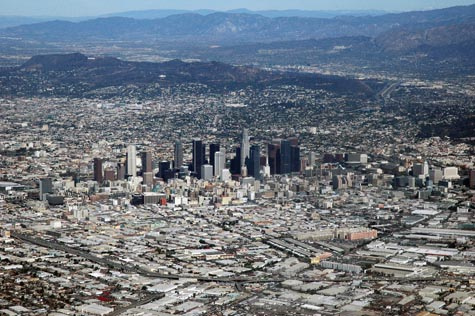 [Image: L.A., as photographed by Marshall Astor].
No matter what you do in L.A., your behavior is appropriate for the city. Los Angeles has no assumed correct mode of use. You can have fake breasts and drive a Ford Mustang – or you can grow a beard, weigh 300 pounds, and read Christian science fiction novels. Either way, you’re fine: that’s just how it works. You can watch Cops all day or you can be a porn star or you can be a Caltech physicist. You can listen to Carcass – or you can listen to Pat Robertson. Or both.
L.A. is the apocalypse: it’s you and a bunch of parking lots. No one’s going to save you; no one’s looking out for you. It’s the only city I know where that’s the explicit premise of living there – that’s the deal you make when you move to L.A. The city, ironically, is emotionally authentic.
It says: no one loves you; you’re the least important person in the room; get over it.
What matters is what you do there. 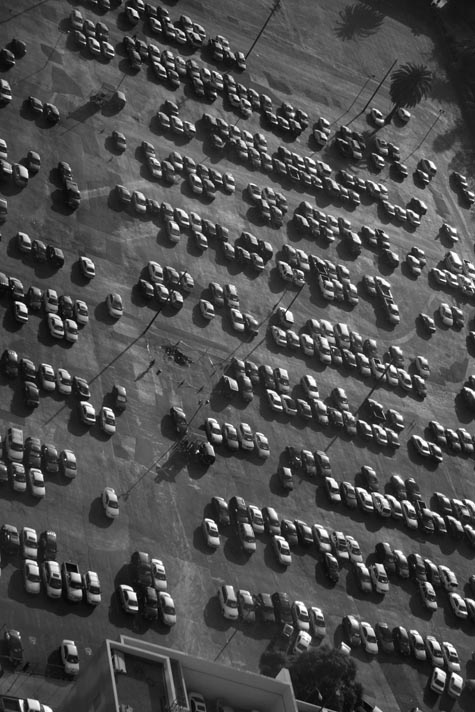 [Image: An extraordinary photograph, called 4.366 Braille, by jenlund70].
And maybe that means renting Hot Fuzz and eating too many pretzels; or maybe that means driving a Prius out to Malibu and surfing with Daryl Hannah as a means of protesting something; or maybe that means buying everything Fredric Jameson has ever written and even underlining significant passages as you visit the Westin Bonaventure. Maybe that just means getting into skateboarding, or into E!, or into Zen, Kabbalah, and Christian mysticism; or maybe you’ll plunge yourself into gin-fueled all night Frank Sinatra marathons – or you’ll lift weights and check email every two minutes on your Blackberry and watch Bruce Willis films.
Who cares?
Literally no one cares, is the answer. No one cares. You’re alone in the world. L.A. is explicit about that.
If you can’t handle a huge landscape made entirely from concrete, interspersed with 24-hour drugstores stocked with medications you don’t need, then don’t move there.
It’s you and a bunch of parking lots.
You’ll see Al Pacino in a traffic jam, wearing a stocking cap; you’ll see Cameron Diaz in the check-out line at Whole Foods, giggling through a mask of reptilian skin; you’ll see Harry Shearer buying bulk shrimp.
The whole thing is ridiculous. It’s the most ridiculous city in the world – but everyone who lives there knows that. No one thinks that L.A. "works," or that it’s well-designed, or that it’s perfectly functional, or even that it makes sense to have put it there in the first place; they just think it’s interesting. And they have fun there.
And the huge irony is that Southern California is where you can actually do what you want to do; you can just relax and be ridiculous. In L.A. you don’t have to be embarrassed by yourself. You’re not driven into a state of endless, vaguely militarized self-justification by your xenophobic neighbors.
You’ve got a surgically pinched, thin Michael Jackson nose? You’ve got a goatee and a trucker hat? You’ve got a million-dollar job and a Bentley? You’ve got to be at work at the local doughnut shop before 6am? Or maybe you’ve got 16 kids and an addiction to Yoo-Hoo – who cares?
It doesn’t matter.
Los Angeles is where you confront the objective fact that you mean nothing; the desert, the ocean, the tectonic plates, the clear skies, the sun itself, the Hollywood Walk of Fame – even the parking lots: everything there somehow precedes you, even new construction sites, and it’s bigger than you and more abstract than you and indifferent to you. You don’t matter. You’re free. 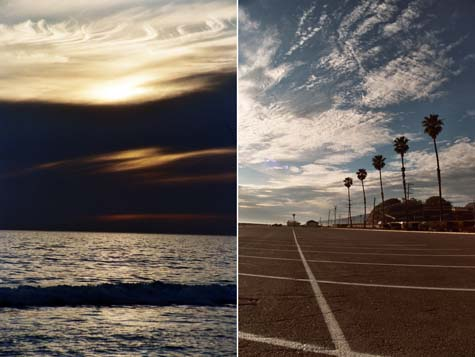 [Image: Two beautiful photos by Andrew Johnson; here’s the left, here’s the right].
In Los Angeles you can be standing next to another human being but you may as well be standing next to a geological formation. Whatever that thing is, it doesn’t care about you. And you don’t care about it. Get over it. You’re alone in the world. Do something interesting.
Do what you actually want to do – even if that means reading P.D. James or getting your nails done or re-oiling car parts in your backyard.
Because no one cares.
In L.A. you can grow Fabio hair and go to the Arclight and not be embarrassed by yourself. Every mode of living is appropriate for L.A. You can do what you want.
And I don’t just mean that Los Angeles is some friendly bastion of cultural diversity and so we should celebrate it on that level and be done with it; I mean that Los Angeles is the confrontation with the void. It is the void. It’s the confrontation with astronomy through near-constant sunlight and the inhuman radiative cancers that result. It’s the confrontation with geology through plate tectonics and buried oil, methane, gravel, tar, and whatever other weird deposits of unknown ancient remains are sitting around down there in the dry and fractured subsurface. It’s a confrontation with the oceanic; with anonymity; with desert time; with endless parking lots.
And it doesn’t need humanizing. Who cares if you can’t identify with Los Angeles? It doesn’t need to be made human. It’s better than that.