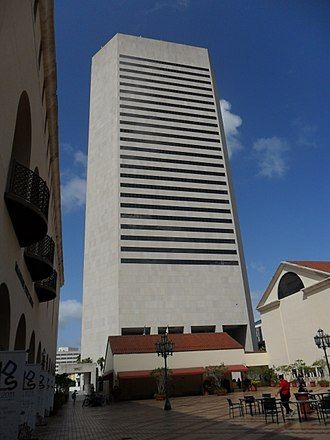 The Stephen P. Clark Government Center, the headquarters of the Miami-Dade government

State voters amended the State of Florida's Constitution in 1956 to allow for a Home Rule Charter. Dade County was granted the power to create commission districts, pass ordinances, create penalties, levy and collect taxes to support a centralized metropolitan form of government. The Board of County Commissioners may create municipalities, special taxing districts and other boards or authorities as needed.

The Home Rule Charter for Miami-Dade County was adopted by referendum on May 21, 1957. This predates the 1968 revision to the Florida Constitution, which radically altered home rule.

On November 13, 1997 voters changed the name of the county from Dade to Miami-Dade to acknowledge the international name recognition of Miami. 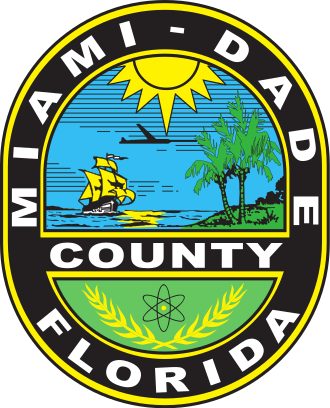 Seal of the Miami-Dade County government.

Unlike a consolidated city-county, where the city and county governments merge into a single entity, these two entities remain separate. Instead there are two "tiers", or levels, of government: city and county. There are 34 municipalities in the county, the City of Miami being the largest.

Cities are the "lower tier" of local government, providing police and fire protection, zoning and code enforcement, and other typical city services within their jurisdiction. These services are paid for by city taxes. The County is the "upper tier", and it provides services of a metropolitan nature, such as emergency management, airport and seaport operations, public housing and health care services, transportation, environmental services, solid waste disposal etc. These are funded by county taxes, which are assessed on all incorporated and unincorporated areas.

Of the county's 2,751,796 total residents (as of 2017),[2] approximately 44% live in unincorporated areas, the majority of which are heavily urbanized. These residents are part of the Unincorporated Municipal Services Area (UMSA). For these residents, the County fills the role of both lower- and upper-tier government, the County Commission acting as their lower-tier municipal representative body. Residents within UMSA pay an UMSA tax, equivalent to a city tax, which is used to provide County residents with equivalent city services (police, fire, zoning, water and sewer, etc.). Residents of incorporated areas do not pay UMSA tax.

An Executive Mayor and the Miami-Dade Board of County Commissioners (BCC) govern the County. The County's main administrative offices are located in the Stephen P. Clark Center (SPCC) at 111 NW 1ST Street in downtown Miami. 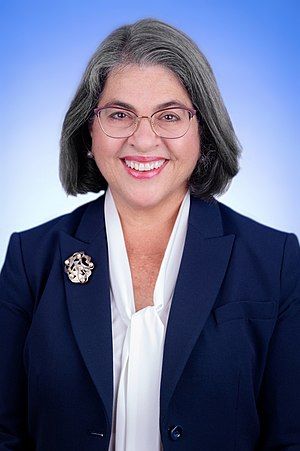 The Mayor is elected through a countywide vote and is not a member of the Commission. The Mayor has the power to veto actions of the Commission within ten days of their adoption. The Mayor appoints the County Manager, subject to the approval within 14 days of a majority of Commissioners. Both the Mayor and the Commission have the power to remove a County Manager, requiring a two-thirds vote of Commissioners then in office. No one elected as Mayor may serve more than two consecutive four-year terms. Each year the Mayor delivers a state of the county report (usually in January) and a budget address (usually in July). The post of mayor is currently held by Daniella Levine Cava.

The Miami-Dade County Clerk is an elected constitutional officer as mandated by Article V, Section 16 of the Constitution of the State of Florida. The clerk serves as ex-officio clerk of the Board of County Commissioners, county recorder, county auditor, custodian of all county funds, custodian of all records filed with the Court. The Clerk is elected to a four-year term by the electorate of Miami-Dade County. In 1992, Harvey Ruvin was elected to the Office of Miami-Dade County Clerk of Courts. He has been re-elected five times, leading the ballot in 2016 with the largest vote total in South Florida's history.[4]

The Miami-Dade Clerk of the Board is an elected official who provides direct administrative support to the Board of County Commissioners. The Clerk provides checks and balances in County Government and presides as the County's public trustee. Harvey Ruvin is also Clerk of the Board.

The Miami-Dade Property Appraiser acts as the head of the Office of the Property Appraiser. The Office's primary responsibility is to identify and appraise all real and tangible personal property within the County and certify the annual tax roll with the Florida Department of Revenue in accordance with State law. Additional responsibilities include the maintenance of all associated property records, the administration of all exemptions, and the annual notification to all property owners in Miami-Dade County of the assessed value of their property. Pedro J. Garcia was first elected as Miami-Dade County Property Appraiser in 2008. After losing re-election in 2012 he was subsequently re-elected to office in a 2014 special election and was unopposed in the 2016 elections.[5]

The Miami-Dade Inspector General has authority to review past, present and proposed County and Public Health Trust programs, accounts, records, contracts, and transactions. The OIG investigates allegations of fraud, waste, abuse and misconduct amongst public officials and County employees, as well as contractors and vendors doing business with the County.[6] Mary Cagle was appointed to the position of Inspector General by Miami-Dade Board of County Commissioners on December 17, 2013.[7]

One County Commissioner is elected from each of Miami-Dade County's 13 districts to serve a four-year term. Residents choose only from among candidates running in the district in which they live. Commissioners are chosen in non-partisan, single-district elections and can serve two four-year staggered terms, with elections scheduled every two years. The Commissioners elect a Chairperson, and the Chairperson appoints the members, chairperson and vice chairperson of all standing committees.[8]

Composition of the Board of Commissioners
Democratic (7)
Republican (6)

The Charter includes a Citizens Bill of Rights with provisions for: convenient access, truth in government, access to public records, the right to be heard, the right to timely notices, right to public hearing, no unreasonable postponements, prompt notice of actions and reasons, financial disclosure by candidates and other public officials, and a Commission on Ethics and the Public Trust.