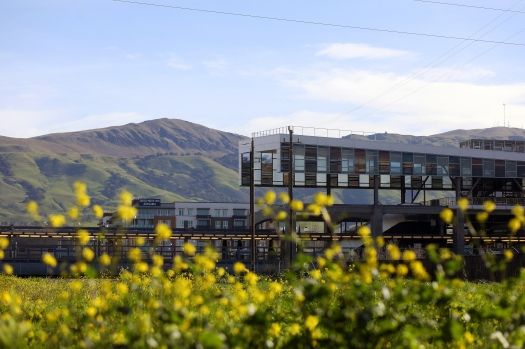 FREMONT — A $41 million pedestrian bridge and plaza that could connect thousands of residents and workers in South Fremont to the west side of the BART Warm Springs station finally opened Thursday morning, after years of delays.

The bridge and plaza opened to pedestrians and bicyclists around 5 a.m. Thursday, as the first BART trains of the morning started running at the station.

"It’s a huge win for our riders down there in terms of convenience," BART spokesperson Chris Filippi said Wednesday in an interview about the bridge.

The landmark public works project spearheaded by Fremont elevates pedestrians to cross over Union Pacific railroad tracks. The railroad tracks separate the BART station from the area to the west, where Tesla’s factory is located, along with other advanced manufacturing company campuses nearby, and new housing and commercial developments are happening. 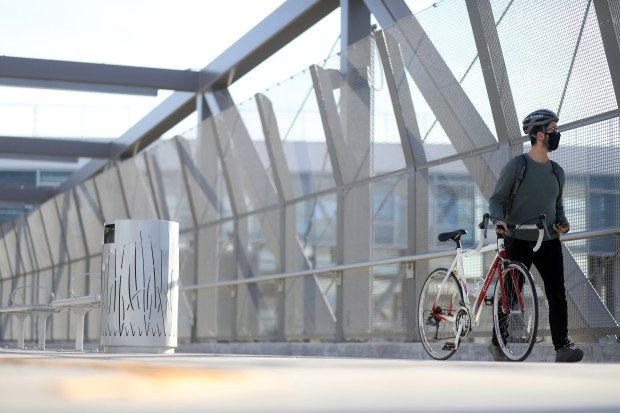 Blocked by those tracks since the Warm Springs/South Fremont BART station opened in 2017, commuters who either live or work on the west side of it previously had to walk, bike, or drive in a circuitous mile-plus route around the tracks to the station’s east entrance, or take a private company shuttle there.

"We know our riders have been anxious for this, and the opportunity to open this for them, and make it easier to get to the station from that west side and have that direct route is really essential," Filippi said.

Seung Lee, 68, lives in one of the nearby apartment complexes, and said he walks the area most mornings. On Thursday, he noticed fencing was removed from the plaza and bridge escalators, and went to check it out with his young grandson, Kaleb.

"I’ve been waiting for this to open," Lee said.

Lee said he’s looking forward to having much easier access to BART from his home when he wants to go to San Francisco.

The plaza and bridge landing are at the eastern end of Innovation Way, in an area of Warm Springs the city has named the "Innovation District." Officials have been working for roughly two decades to plan for and support the "revitalization" of 850 acres of previously industrial and vacant land in the district.

Along with a completed elementary school, up to 4,000 townhouses, condominiums and apartments are in various stages in the area — completed, being actively built or planned — on either side of the BART station. 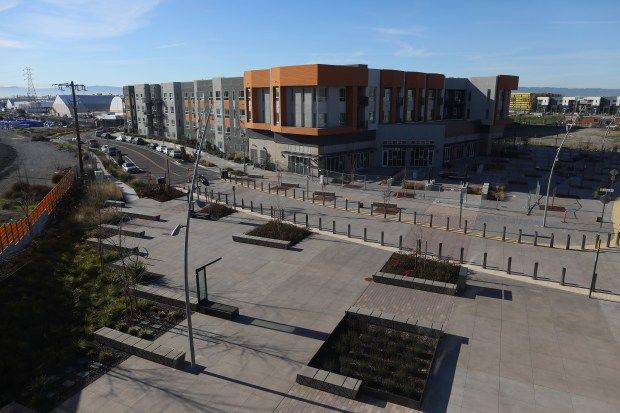 There are also plans for future retail shops, a hotel and office buildings in the area, along newly paved streets that have white street signs with an image of an illuminated yellow light bulb — think "bright idea."

"It’s a great win for access, to make it easier for folks to walk, bike, access the station, get to BART as easily as possible. It’s going to be a big improvement for them," Filippi said.

Some people checked out the bridge Thursday morning after coming up the escalators from the station’s east entrance before heading down to the train platform.

Others, like Alice Marecek, 36, of Fremont, weren’t riding BART, but came to the area just to see the new bridge.

She said the plaza seems "very well thought out" for allowing people to spend some time there, with nice amenities like charging ports near some benches and seating.

Having not been to Warm Springs in a while, Marecek said she was surprised by all the housing developments going up.

"It has a very European feel, with the high density living near transit," she said.

The bridge is about 250 feet long and is made up of a steel truss portion and a section supported by cables attached to a towering 110-foot high angled pylon, adding a stylish flair to the project.

The bridge and plaza were originally expected to open as early as fall 2018, but faced several delays, some before shovels ever hit the ground, including higher than anticipated construction bids.

Once work began, complications arose with transporting the large assembled truss portion of the bridge from Washington state to the site, due to unforeseen Caltrans work along the original route, and it had to be rerouted through Idaho and Nevada. 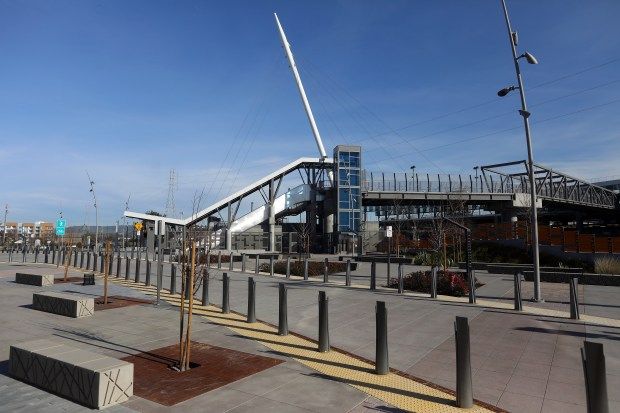 That delay also affected a scheduled installation of the bridge pieces over the Union Pacific tracks, which required the agency to shut down its rail use temporarily, and had to be rescheduled. After construction was mostly complete almost a year ago, the opening was held up while contractors tested electronics and safety systems with the transit agency, according to city officials.

The estimated opening of the bridge was pushed back to sometime in fall 2021, but missed that mark by a little over a month. Hans Larsen, Fremont’s public works director, said in an email a significant cause of the most recent delay was COVID-19, "where scheduled work had to be delayed due to key people being out sick."

The construction cost for the plaza and bridge of $30 million was funded by the Alameda County Transportation Commission with Measure BB sales tax money, while about $11 million from Fremont’s capital improvement and traffic impact funds covered the cost of city pre-construction work, according to the city.

"This project and related development are a great example of how Fremont ‘makes things happen’ to keep advancing our city as an exceptional place to live, work and play and to have options for traveling around our community," Fremont Mayor Lily Mei said in a statement. 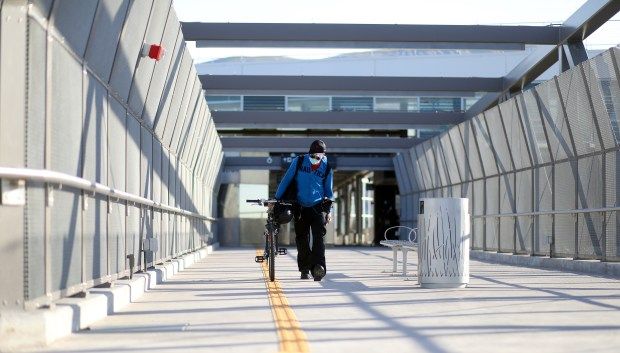 Filippi, of BART, noted that because of the pandemic, ridership has been down significantly, and it is difficult to predict how many people will be using the new bridge as ridership continues to rebound.

Across the BART system, average weekday ridership in December 2021 was at about 26% of pre-pandemic averages, according to the agency.

"It is in this burgeoning Innovation District and there’s so much activity going on there, that long term, there’s a lot of excitement about where that ridership is going to go," Filippi said of the bridge.

He said BART is working to make improvements around the system to welcome riders back with an improved experience, such as reopening bathrooms, restoring longer service hours and creating easier access to the stations, including the new bridge.

Larsen said Fremont is "extremely pleased" to have delivered the project to BART this week.

"The West Access Bridge and Plaza is a critical link between transit, housing and jobs, and it is a centerpiece for an exciting new urban neighborhood in Fremont," Larsen said.

"We invite everyone in the Bay Area to hop on a BART train to come check it out," he said.

While Thursday’s opening will be free of any fanfare, Larsen said the "whole new neighborhood is a cause for celebration" along with the bridge, and the city plans to hold a "party on the plaza" there sometime soon.

Get Morning Report and other email newsletters

The following is a list of the most commented articles in the last 7 days.

A trending article titled "Oakland landlords lose appeal after paying $6,500 to move into a home they owned" with 29 comments.

A trending article titled "Firefall at Yosemite is back: No reservations this time, but restrictions are in place" with 1 comment.

Firefall at Yosemite is back: No reservations this time...

A trending article titled "San Jose’s mayoral race is becoming a big-money affair. Where is it all coming from?" with 4 comments.