Sickle cell patients such as Cassandra Trimnell and Evie James Junior and UCSF physician Mark Walters talk about the severe pain experienced by those with the disease and the potential benefits of a CRISPR cure. (Video by UC Berkeley Public Affairs; video of Evie Junior by Colin Weatherby, courtesy UCLA’s Eli and Edythe Broad Center of Regenerative Medicine and Stem Cell Research)

In 2014, two years after her Nobel Prize-winning invention of CRISPR-Cas9 genome editing, Jennifer Doudna thought the technology was mature enough to tackle a cure for a devastating hereditary disorder, sickle cell disease, that afflicts millions of people around the world, most of them of African descent. Some 100,000 Black people in the U.S. are afflicted with the disease.

After six years of work, that experimental treatment has now been approved for clinical trials by the U.S. Food and Drug Administration, enabling the first tests in humans of a CRISPR-based therapy to directly correct the mutation in the beta-globin gene responsible for sickle cell disease. Beta-globin is one of the proteins in the hemoglobin complex responsible for carrying oxygen throughout the body.

The trials, which are expected to take four years, will be led by physicians at UCSF Benioff Children’s Hospital Oakland and UCLA’s Broad Stem Cell Research Center who plan to begin this summer to enroll six adults and three adolescents with severe sickle cell disease.

The IGI’s clinical diagnostics laboratory, which was built under Doudna’s leadership to provide free COVID-19 testing to the Berkeley community, will play a key role in analytical support for the trial by developing diagnostics to monitor patient well-being and track the efficiency of the treatment.

"We are motivated to work toward a cure that can be accessible and affordable to patients worldwide," said Doudna, UC Berkeley professor of molecular and cell biology and of chemistry and a Howard Hughes Medical Institute investigator. "The launch of this trial is an essential first step on that path." 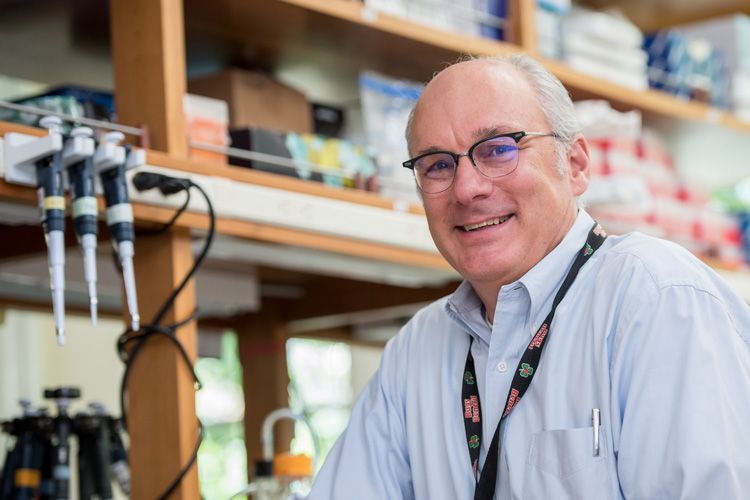 Dr. Mark Walters, a professor of pediatrics at UCSF and the Jordan Family Director of the Blood and Marrow Transplantation Program at UCSF Benioff Children’s Hospital Oakland, is leading the clinical trial. (Photo courtesy of UCSF)

Other trials have successfully used CRISPR-Cas9 to knock out a gene that suppresses the fetal hemoglobin gene, which is normally turned off in humans. That technique reawakens the fetal gene and, in at least three patients, has alleviated symptoms of sickle cell disease.

The new trial is a gene knock-in: The researchers are using CRISPR-Cas9 to replace the defective beta-globin gene with a repaired version, with the goal of creating normal, adult red blood cells and curing the disorder.

"This therapy has the potential to transform sickle cell disease care by producing an accessible, curative treatment that is safer than the current therapy of stem cell transplant from a bone marrow donor," said Dr. Mark Walters, a professor of pediatrics at UCSF and principal investigator of the clinical trial and gene editing project. "If this is successfully applied in young patients, it has the potential to prevent irreversible complications of the disease."

Another clinical trial also using CRISPR to directly correct the sickle cell mutation, but with a slightly different approach, is planned to begin this year, run by Graphite Bio based on research out of Matthew Porteus’ lab at Stanford University.

Patients are their own stem cell donor

The technique, as with the alternate approach that reawakens fetal hemoglobin, requires that some of the patient’s hematopoietic stem cells — the bone marrow cells that generate all the body’s red blood cells — be harvested for gene editing outside the body. After these cells are removed, the remaining bone marrow is destroyed with chemotherapy to allow space for the repaired and reinfused stem cells to grow. 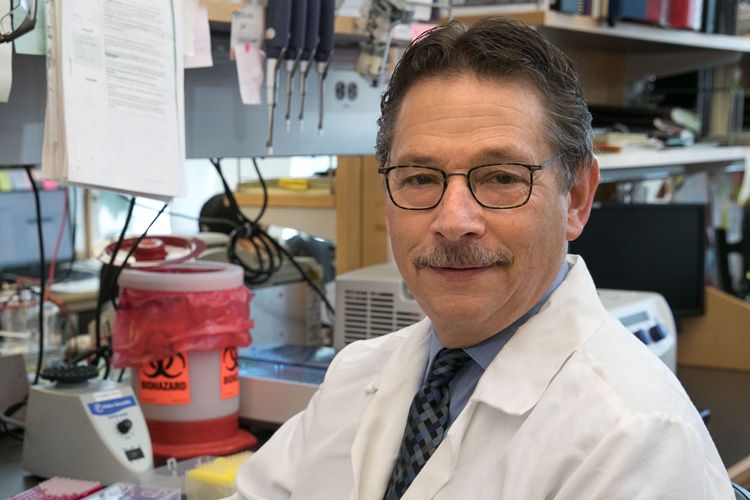 Dr. Donald Kohn, a distinguished professor of microbiology, immunology and molecular genetics, pediatrics and molecular and medical pharmacology at the David Geffen School of Medicine at UCLA and a member of the UCLA Broad Stem Cell Research Center, is involved in various gene therapy trials for diseases such as SCID and sickle cell disease. (Photo courtesy of UCLA)

Walters, who is also the Jordan Family Director of the Blood and Marrow Transplantation Program at UCSF Benioff Children’s Hospital Oakland, will be working with UCLA physician-scientist Dr. Donald Kohn, who has developed gene therapies for several genetic blood disorders, including a cure for a form of severe combined immunodeficiency (SCID). Kohn is also leading a clinical trial of a different type of gene therapy for sickle cell disease, which involves adding a new gene to patients’ stem cells to overcome the sickle cell mutation.

"Gene therapy and gene editing allow each patient to serve as their own stem cell donor," said Kohn, a distinguished professor of microbiology, immunology and molecular genetics, pediatrics, and molecular and medical pharmacology at the David Geffen School of Medicine at UCLA and a member of the UCLA Broad Stem Cell Research Center. "In theory, these approaches should be much safer than a transplant from another person and could become universally available because they eliminate the need to find the needle in a haystack that is a matched stem cell donor."

Kohn will lead the laboratory and clinical trial activities at UCLA and oversee all manufacturing of the drug product, called CRISPR_SCD001, for the clinical trial. The preclinical work to develop this therapy was funded by the California Institute for Regenerative Medicine; the National Heart, Lung, and Blood Institute-led Cure Sickle Cell Initiative; and the Doris Duke Charitable Foundation.

Fyodor Urnov, IGI director of technology and translation and a UC Berkeley professor of molecular and cell biology, will oversee the bioinformatics and genomics activities for the study.

"It is noteworthy that this new trial comes from a consortium of not-for-profit academic institutions incentivized with a long-term vision to cure the disease with an affordable solution that can globally benefit everyone who needs it," Urnov said. 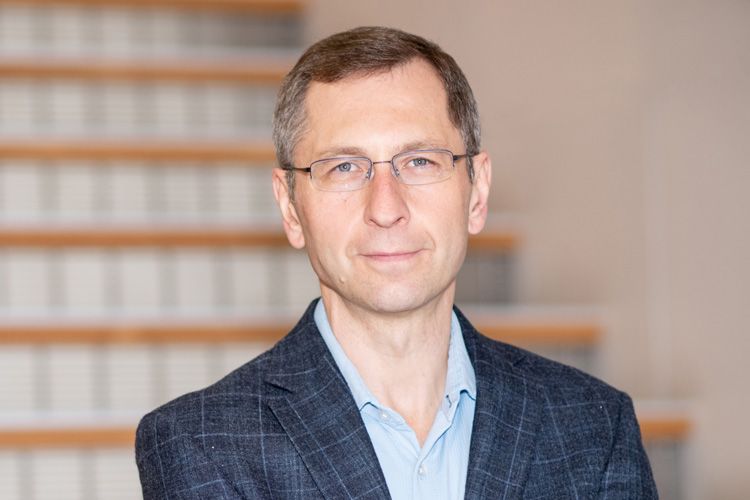 Fyodor Urnov, IGI director of technology and translation, will oversee the bioinformatics and genomics activities for the clinical trial. (Photo by Keegan Houser)

Sickle cell disease is caused by a single change in the DNA code of the beta-globin gene. The new trial uses the CRISPR-Cas9 nuclease — a fully assembled Cas9 protein and guide RNA sequence targeting the defective region of the beta-globin gene, accompanied by a short DNA segment encoding the proper sequence — to stimulate repair of the sickle mutation by substituting the normal DNA segment for the abnormal one. In this approach, the patient’s blood stem cells are first treated with electrical pulses that create pores in their membranes. These pores allow the CRISPR-Cas9 platform to enter the stem cells and travel to their nuclei to correct the sickle cell mutation.

"The goal of this form of genome-editing therapy is to correct the mutation in enough stem cells so the resulting blood in circulation has corrected red blood cells," Walters said. "Based on our experience with bone marrow transplants, we predict that correcting 20% of the genes should be sufficient to out-compete the native sickle cells and have a strong clinical benefit."

The final manufacturing protocol uses a virus-free method to edit blood stem cells and has been validated in pre-clinical safety/toxicology studies performed after consultation with the FDA.

While UC physicians take the current CRISPR therapy into clinical trials, IGI scientists are working to improve the technique so that, eventually, the correction of the sickle cell mutation can be done inside the body, without removing stem cells or destroying the bone marrow. Because the bone marrow also produces white blood cells that protect us from disease, destroying it dampens the immune system and puts patients at increased risk of infection or even cancer until the infused, corrected stem cells can multiply and replenish. 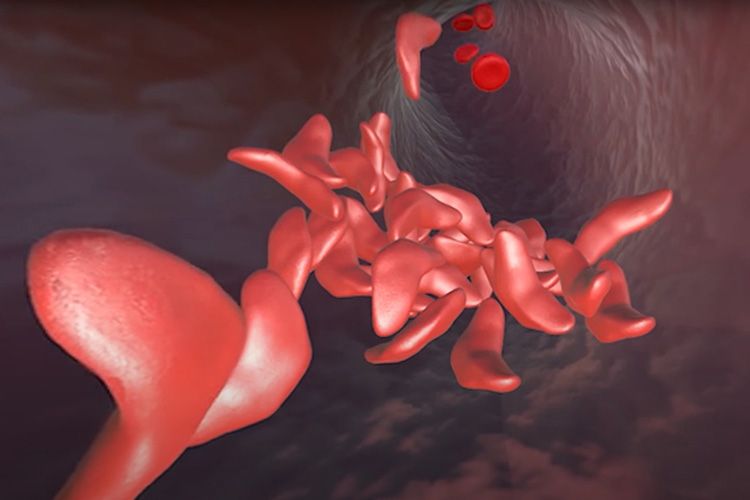 Sickle cell disease is caused by a mutation in the beta-globin gene that makes red blood cells warp into a sickle shape (foreground) as compared to the normal circular shape seen in the background. The sickled cells clog arteries, leading to intense pain and organ damage. (Image courtesy of Innovative Genomics Institute, UC Berkeley)

"Currently, we are doing ex vivo therapy, where you take cells out of the bone marrow to correct the mutation outside the body," said Ross Wilson, IGI’s director of therapeutic delivery. "But during this time — it could be months — the bone marrow is filling back up. As a result, when it’s time to infuse the corrected cells, the patient must be subjected to aggressive chemotherapy that clears out the bone marrow and allows those corrected cells to find a home."

Wilson is optimistic that he and IGI scientists can find a way to send the CRISPR therapy directly to the bone marrow inside the body, using antibodies to target the CRISPR enzyme to the correct stem cells. Other scientists, who use engineered viruses or fatty droplets — lipid nanoparticles — to ferry the CRISPR enzyme into the body, have so far failed.

"The molecule we are trying to deliver is physically smaller — an eighth the diameter of the nanoparticles other people try to deliver to the bone marrow — and this could provide big benefits," he said. "Our self-delivering enzyme should be able to reach the bone marrow." 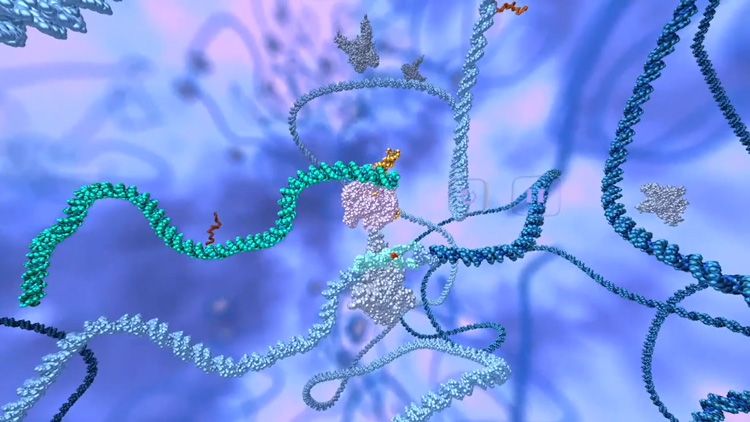 Whatever the successful strategy, either ex vivo or in vivo, the CRISPR platform developed for sickle cell disease could transform gene therapy for other diseases.

"That is the IGI vision: first sickle cell, but our efforts will have a ripple effect to enable cures for blood disorders in general, like beta thalassemia, as well as diseases of the immune system," he said. "The hematopoietic stem cell is the seed for the entire immune system, so all blood disorders can theoretically be cured by a stem cell therapy like this."