Your guide to a disrupted world

For those without a garden, these idiosyncratic spaces are invaluable and command a premium 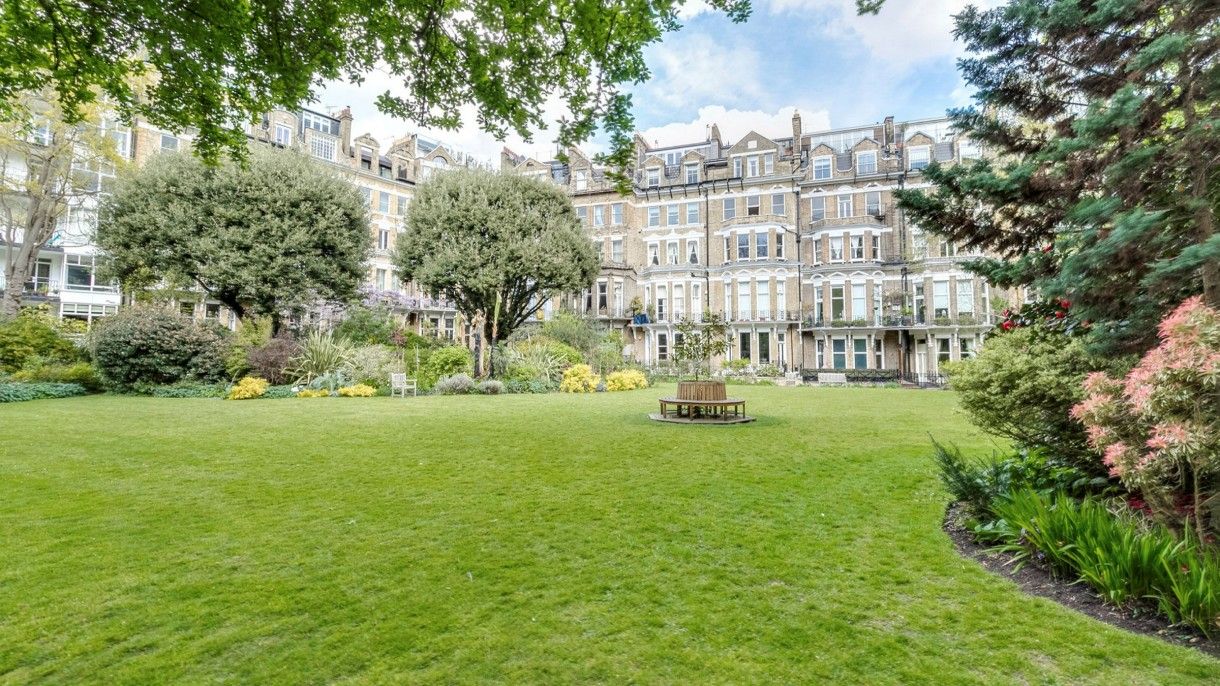 When London’s Hyde Park started getting packed with people during last spring’s lockdown, Nigel Drummond would take his two boys down to the residents’ garden square in front of his flat in South Kensington.

The large green space is home to a well-maintained rose garden and lawn, with paths that wind their way to a children’s play area, all enclosed by mature trees and gated railings to which only the square’s residents have the keys.

"[It became] even more of an asset during lockdown, and I would decamp to a bench there with a coffee while working from home," says the medical cannabis entrepreneur, who is now planning to move to Switzerland.

Residents-only garden squares were designed by the Georgians and Victorians to bring a pocket of the countryside into the city’s cheek-by-jowl neighbourhoods. In 1927, the London Society, a members’ organisation established to encourage public interest in the city’s infrastructure, described garden squares as the "pride of London’s planning".

In recent years, they have become prized by residents who do not have their own gardens — and, since the pandemic, they have become invaluable, with buyers being prepared to pay a premium for homes with access to one. 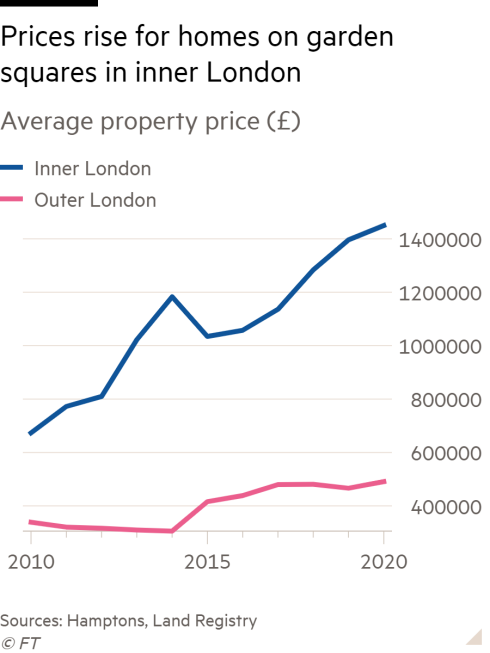 In the past, prospective buyers wouldn’t even set foot in the residents’ garden on a viewing, says estate agent Richard Dalton, who is a director at Savills’ Belgravia office. Most were focused on the kudos of the address, or the view from the drawing room window. That has changed, he says.

"Buyers now take up my offer to tour the garden because using that space has become important." He says that one seventy-something resident of Eaton Square has walked 12,000 laps around it (or an incredible 3,000 miles) since the start of the lockdown in March 2020.

Eaton Square is among the most prestigious of the capital’s garden squares — last year, the average property sold there cost more than £3.2m, according to estate agency Hamptons. Other jewels in the crown include Chester Square, Wilton Crescent and Belgrave Square.

In Belgravia, properties on squares command a 28 per cent premium over those that are not, according to Savills, yet living on your own private park is more affordable in other neighbourhoods. 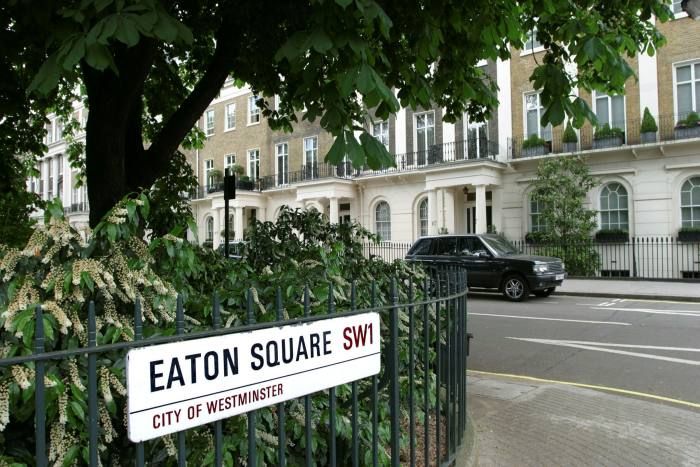 Eaton Square, among the most prestigious in London; last year the average property price was more than £3.2m © Alamy

Fassett Square in Hackney, east London — the inspiration for the fictitious Albert Square in TV soap EastEnders — is home to a beautiful rose-filled garden. There, a three-bedroom flat is available to rent for £600 a week. In Durand Gardens in Stockwell, south London, a two-bedroom flat with use of the private residents’ garden is for sale for £765,000, through estate agency Winkworth.

Many of the capital’s squares open to the public at this time of year as part of the London Open Gardens scheme, but due to ongoing Covid-19 restrictions, this year’s event will be virtual. "The gardeners have told us that these spaces have been a lifeline for otherwise isolated people during the pandemic," says Nathan Oley, chair of the event. 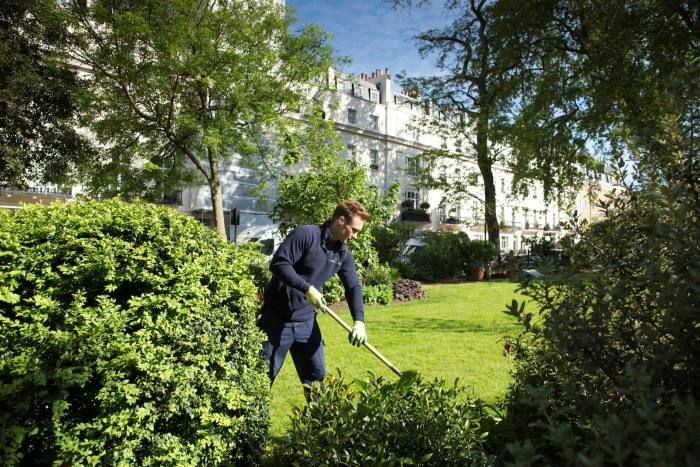 In total, there are about 300 garden squares in inner London, varying in size from half an acre to the nearly seven acres of Ladbroke Square in Notting Hill. A mix of crescents, squares, polygons and "paddocks" — as a particular type in Notting Hill were known — these gardens have remained especially resilient to decades of social change, says Todd Longstaffe-Gowan, a landscape designer and author of the book The London Square.

"Because many of these squares remain privately managed by the people that live on them — committees with vested interests who strictly police their upkeep — they are wonderfully idiosyncratic."

Leafy "green lungs" of the city, garden squares can be a boost to local wildlife — current design trends include fostering biodiversity and habitat preservation, says Longstaffe-Gowan. They can also host social events, and many will resume when the easing of restrictions permits.

Montagu Square in Marylebone, once the home of musicians Jimi Hendrix and Ringo Star, used to have an annual summer party. With cocktails on the lawn, live music and a raffle — all to raise money for a nearby centre for the homeless — it has been sorely missed by Anne Bristow, a 30-year-long resident.

"It’s a fabulous event, for which we all pay £50 a ticket, and we put up a marquee for a week, so residents can use it for other events," says Bristow. "Even without it, I have met more of my neighbours in the past year by just having a picnic or a walk there."

Although the square is owned by the Portman Estate, as part of the garden’s committee, she helps make day-to-day decisions about the upkeep, the fees (an electronic key costs £270-£300 a year) and future events. 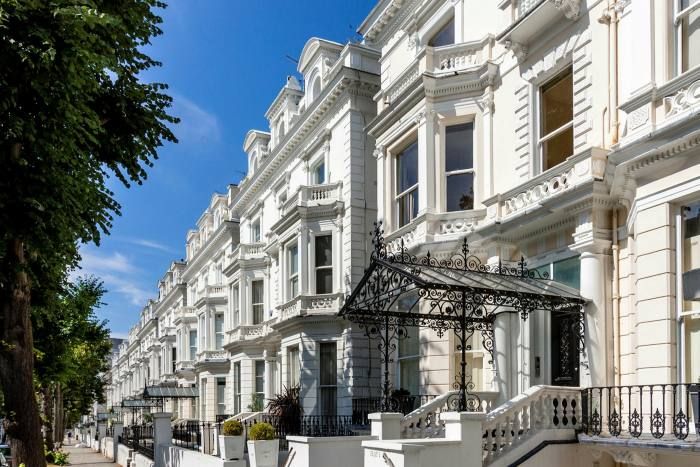 Holland Park has some of the most sought-after squares, which open on to separate houses’ private gardens © Alamy

Squares owned by the city’s great landowning estates tend to be very well kept, but if buying a property on a garden square, do your due diligence on its ownership, says Sophie Rogerson of RFR Property, a buying agent. "Garden squares might be owned by major estates, local trustees or the church. The element of control that residents have over the green space, and the rights to use them, can be revoked."

The continued right to use their garden is the subject of a campaign by more than 300 residents who have access to the Prince’s Square Gardens in Notting Hill that is privately owned and up for sale at £5m through Savills. Local residents say they have donated significant funds to improve the square and made recent improvements of the children’s playground.

Rogerson says high-quality children’s playgrounds are a big draw for buyers who are increasingly discriminatory about which garden squares they want. Less popular are ones next to noisy roads or with a steep slope. More sought after are the communal gardens that open on to private gardens for the separate houses, she says, some of which can be found on Lansdowne Road and Clarendon Road in Holland Park.

Tennis courts — which often come with extra members’ fees and booking systems — are also requested. There’s a good example (and a croquet lawn) at the late Georgian Edwardes Square in Kensington, which Longstaffe-Gowan picks as an especially lovely example that was saved by local residents after being earmarked for development. 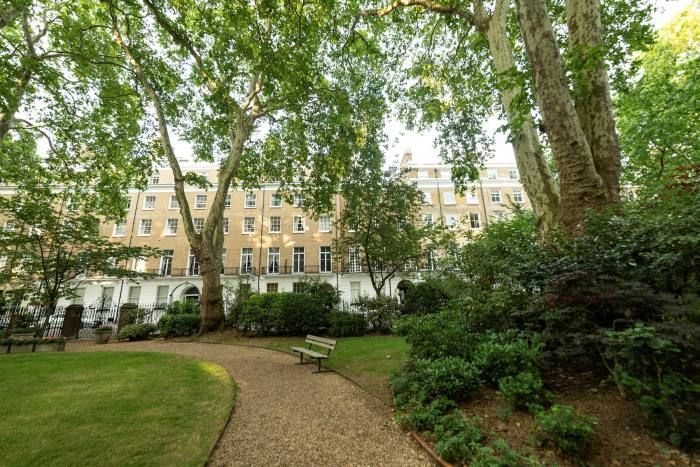 A resident with access to Bryanston Square, in Marylebone, says he appreciates the security and sense of community it offers © Alamy

As dog ownership in the UK has increased by an estimated 3.2m since the start of the pandemic, the issue of whether dogs are allowed to use the garden is also more important, says Rogerson. "One square in Holland Park does allow dogs but residents have a dog-poo cleaning rota."

In Leinster Square in Notting Hill, there’s the rare chance to buy a new apartment (for £6.1m) that offers access to the historic residents-only garden square. But buyers should beware that dogs are banned from using the garden, along with badly behaved children and ball games, according to the bylaws.

On the upside, barbecues (the subject of bans elsewhere) are allowed — and residents may enjoy a performance of The Tempest, as it is one of the usual venues for the annual Shakespeare in the Squares event.

Barry Hirst, who has a two-bedroom flat on Bryanston Square in Marylebone and a five-year-old son, has lobbied for change of his garden’s rules. 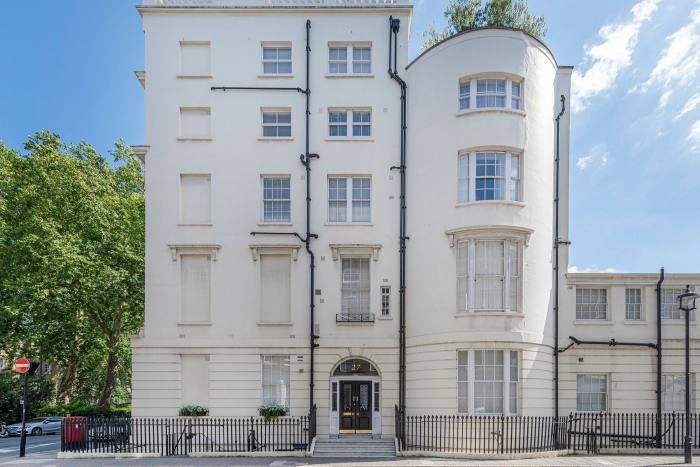 "There’s been an influx of younger families on the square and it has got a bit much when one of the elderly residents kept coming out and shouting at the children for playing ball games," says the founder of Pantechnicon restaurant, who is selling his property in order to upsize, for £3.5m through BHHS.

"These squares might have been little more than ornamental previously but are well used by residents. They offer a wonderful sense of security and community."

FT subscribers can sign up for our weekly email newsletter containing guides to the global property market, distinctive architecture, interior design and gardens.

Balancing the interests of the residents is one of the toughest aspects of managing a square, suggests Jeremy Franks, on the committee of Ladbroke Square Garden, in Notting Hill. As one of the largest gardens in London, it is looked after by two full-time gardeners — one who lives with his family in the cottage within the garden. It has 600 members, and is owned by 100 shareholders.

"During Covid we felt it was the right thing to do to close the tennis court and ban jogging, to safeguard the elderly residents on the narrow paths," says Franks, a retiree, who’s lived on the square since 1989.

"As stewards for the next generation, it’s our job to preserve everything that is so special about the garden. Notting Hill has changed so much in recent years but the garden remains essentially much as it was 150 years ago."

The London Open Gardens event is on June 12. Tickets for online access and to support the London Gardens Trust at londongardenstrust.org/whatson/(opens a new window)

What you can buy for….

A one-bedroom flat on Airlie Gardens, a short walk from Notting Hill and Holland Park Tube stations. Residents have access to the large communal garden. The flat, which is on the lower ground floor, measures 471 sq ft. Available through estate agent Marsh & Parsons. 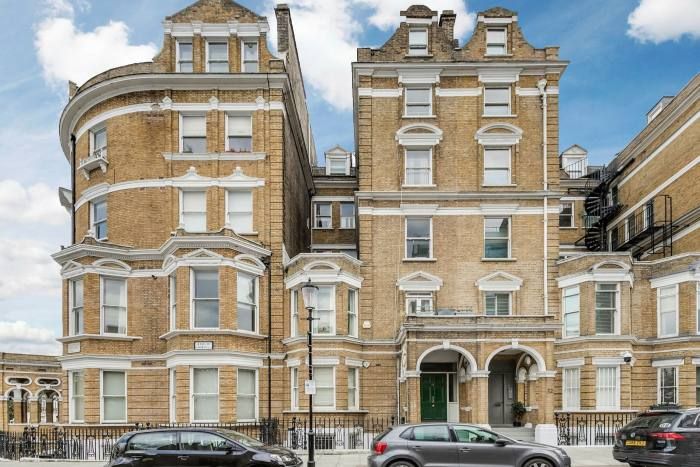 A three-bedroom lateral apartment on Bramham Gardens, an elegant garden square near Earl’s Court Tube. The flat, which measures 1,814 sq ft, has two bathrooms and 3m-high ceilings. The property is available through Savills. 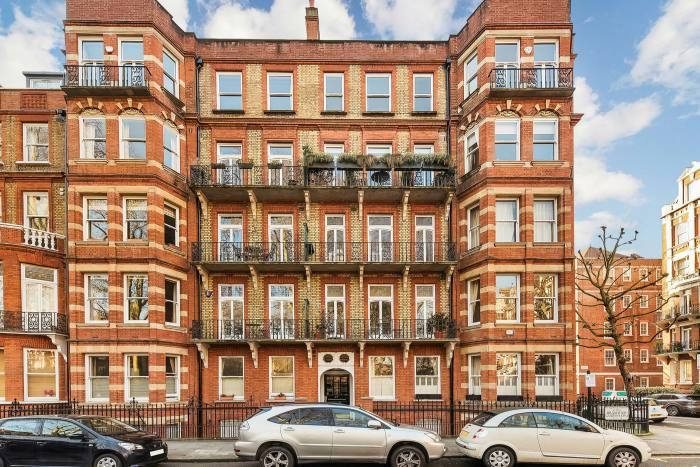 A five-bedroom apartment on the top floor of a period building on Warwick Square in Pimlico. The property, which measures 3,721 sq ft, comes with access to the award-winning garden square, which features a playground and tennis courts. Available through Savills. 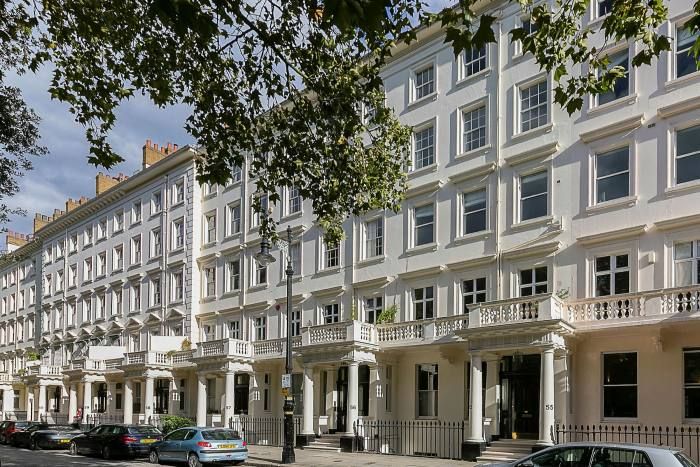 Get alerts on UK property when a new story is published

More from the FT Group