What happens when the edges dissolve?

We are living in a time of profound ambiguity. Physical and institutional boundaries are in flux. The blur is the emblem of design in the 1990s.

The focus of today’s visual landscape is the indistinction between things. In print and on screen edges dissolve to create a virtually seamless panorama, privileging continuity and ambiguity above legibility. Ten years ago this would have been regarded as a visual assault; today it seems perfectly natural. The blur is the emblem of design in the 1990s.

The blur epitomises the dissolution of the visual formalisms that have dominated twentieth century graphic design. Nothing better exemplifies the increasing dominance of photographic properties in all areas of visual design. Nothing better showcases the pervasive influence of digital tools, in particular Adobe Photoshop. And no other visual attribute better characterises the ambiguity of our identities within a highly mediated culture.

When Neville Brody produced a typeface in 1991, he called it Blur. He was in good company - a band of the same name emerged in the British music scene at roughly that time and soon afterwards an eclectic art and culture magazine called Blur was launched in the US. Seemingly overnight, twirls, whirls and blurs appeared in the work of designers within and outside the academy. It was clear that extravagant visual effects were replacing the structural sureties of the past.

Until the mid 1980s it seemed that the classic devices of alignment - margins, columns and grids - would persist forever as the basis of design teaching and practice. These were measurable, discernible tools for organising information within the page which through their steadfast presence afforded typographic freedom. Today the computer, together with the intellectual strands of postmodernism (semiotics foremost among them), challenge the way information is presented and even reading itself. And if reading is challenged, it follows that the letters which constitute much of what is read are also called into question.

Letters are still an important factor in contemporary design, but in the virtuality of cyberspace, poised delicately in phosphor, they are considerably more ephemeral than in the past. The new computer-generated environment has had a more profound impact on design than most designers - pragmatically preoccupied with the threats and inconveniences of incipient technologies - care to acknowledge. (The effects of the desktop publishing revolution are still being felt.) This is a space where narratives can be undone by the discontinuities of hypertext, where letters can exist one moment as flat and two-dimensional and in the next as rounded forms seen as if in flight. This is a space where the ease of manipulation of the medium threatens the message, where ‘user-friendliness’ overrides the authority of the author, where ‘readers’ are given free rein to hop, skip and jump through an intangible environment.

While designers involved with the technical parameters of computers explore the complexities of interface design, those who work with print are more concerned with aesthetics. The ephemerality of text on screen has migrated back to the page, as software applications such as Fontographer and Photoshop have allowed designers to make and unmake typefaces through myriad manipulations - ‘filters’, as Adobe Photoshop calls them. Text and images can now be twirled, posterised, displaced, sharpened, extruded, diffused and, of course, blurred. But not just blurred - Photoshop provides five blur filters.

Such effects have, of course, been available previously in photography, but they made little impact on graphic design. Before the digital revolution, the need for specialised photographic equipment and training meant that photography was a distinct subset of design practice and education. Today, digital tools and production techniques have made photomanipulation available to the masses and have extended the completition of the photographic process: a photograph is no longer in its definitive form on film in the camera or even on the print - the process ends tentatively at the last ‘Save’ within Photoshop. Blurring in photographically based graphic design used to communicate something about speed or focus. But today’s blurred objects are not moving particularly quickly, nor do they serve to draw attention to a foreground element. Nowadays, blurring is used to create a particular ambience - a space within which one object is scarcely differentiated from the next.

Video photography, popularised by MTV from 1981, has made its marks on effects-driven graphic design, which has had to respond to public demand for newness and variety. The proliferation of video imagery has also affected expectations of aspects of image quality, including the cropping, editing and texture of pictures and the relationship between camera angle and scene. As if striving for the fast pacing of television and the graininess of the television monitor’s low resolution, print design began to incorporate video imagery and texture. Once again the computer provided the means, this time to capture video frames for further manipulation in Photoshop. So whereas once the conventions of print were represented on television, now the conventions of television are represented in print. Both are combined in ‘multimedia’ or on the computer, which is the tool used to produce most of the images that are found on both.

Along with the blurring of the relationships between original and replica comes a blurring of the professional boundaries between designers within different media. The computer has levelled the field, leaving designers in each sector to scramble for ownership of part of the turf. Increasingly, this turf is the multimedia marketplace.

Digital technology has rendered the design process at once more accessible and more elusive. As hardware and software packages continue to drop in price, more novices enter the arena as practising designers while some of those schooled in earlier techniques and aesthetics continue to apply old principles - inappropriately at times - to new problems. When designing their first CD-ROM titles, graphic designers tend to reproduce the page on screen while video producers strive for the effects of film and television. Both struggle with interface design, a practice which has more in common with industrial design.

How are we to respond when technology allows illegibility to become an acceptable norm? Pessimists talk about the collapse of common sense as an elite design class foists stylistic decadence on a naïve public. Optimists hail the liberation of the reader from the authority of the writer and view the new visual landscape as inherently participatory. Whether we celebrate or despair, it is clear that the techniques of digital image-making have combined with the aesthetics of deconstruction to create a malleable visual landscape modulated by the ‘production values’ of mass media and made ubiquitous by the exponential increase in computer processing power over the last decade.

We are living in a time of profound ambiguity, at once liberating and unsettling. The physical and institutional boundaries through which we have traditionally defined ourselves and against which we have rebelled - whether political, sexual or cultural - are in flux. We are not sure who we are or who we want to be, and there is no moral imperative to spur us towards a decision. What are we to do when we no longer recognise the culprit? And why bother, when the next upheaval, whether an act of political terrorism or of plastic surgery, can speedily reinvent us?

In this boundary-free world, we can never be sure where responsibility lies. The chain of casuality includes real and virtual acts, some of which can be reversed by a simple ‘Undo’ command, others which are indelible. The interplay between the two and our efforts to disentangle them lead to confusion. The quickened pace afforded by technology has slowed our reactions - mesmerised, we can scarcely formulate our response to what we see before the ground shifts, reframing us in yet another context.

Whether blurring is about the promise of infinitive possibilities of the decadence of digitally enhanced leisure, it epitomises the world we live in today - transmutable, mediated, ambiguous. As we reflect on the turn of yet another century, the blur raises the question: what exactly did we see, anyway?

Eye is the world’s most beautiful and collectable graphic design journal, published quarterly for professional designers, students and anyone interested in critical, informed writing about graphic design and visual culture. It is available from all good design bookshops and online at the Eye shop, where you can buy subscriptions and single issues. 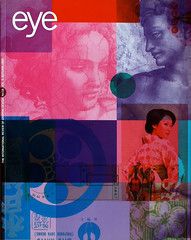