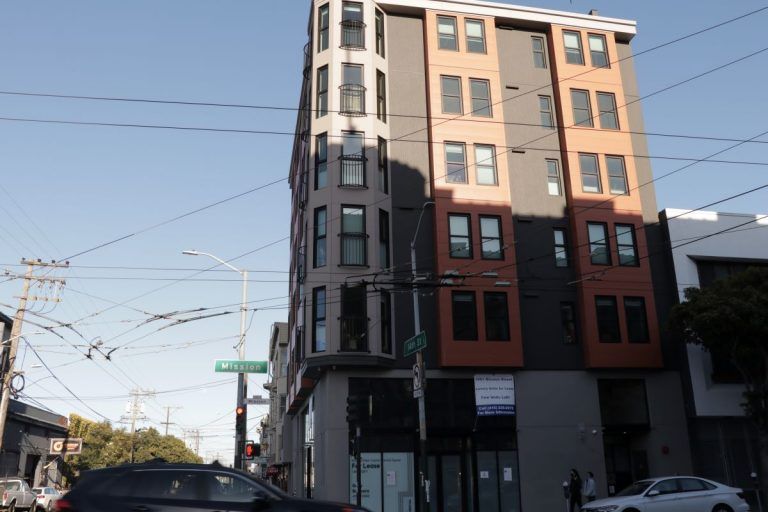 1801 Mission St., the building where The Creamery is planned to operate.

The Creamery, a cafe located a few blocks from Oracle Park for 12 years, is coming to the ground floor of a new apartment complex at 1801 Mission St., on the corner of 14th Street.

After an hour of comment and debate, the Planning Commission approved the project unanimously but asked the project sponsors to do more community outreach and hire locally — an agreement made after The Creamery’s opponents filed for a "discretionary review," a formal opposition that brought the matter in front of the commission on Thursday.

During its time on the corner of 4th and Townsend streets, The Creamery was widely regarded as a hub for tech workers and venture capitalists. It hosted some of the meetings that led to the founding of AirBnB, said Creamery owner Ivor Bradley, an immigrant from Ireland.

When the lease for his business in SoMa expired last August, Bradley closed up shop in anticipation of a new housing development that would displace his business.

Stay in touch with our neighborhood.

By clicking submit, you agree to share your email address with Mission Local and Mailchimp. Use the unsubscribe link in those emails to opt-out at any time.

Stephen Antonaros, architect of the new apartment complex at 1801 Mission St., submitted plans on behalf of Bradley to take the building’s ground-floor commercial space and switch the land’s use from retail to limited restaurant use, which is already permitted by the zoning.

"They actually had that space on the market for two years, and nobody took it," Antonaros said.

Once the plans were submitted, members of Cultural Action Network, a community organization that’s been around since at least 2015 and is a member of United to Save the Mission, a neighborhood coalition fighting gentrification, submitted a request signed by member Ben Terrall for the discretionary review, essentially asking the Planning Commission to review the project and potentially alter it.

"There are already mom-and-pop restaurants and cafes in the local vicinity that are struggling during this pandemic," Terrall wrote in the request. "This new, large, upscale competitor is not what these local businesses need."

During the resulting Planning Commission hearing on Thursday, members of Cultural Action Network, Calle 24 and United to Save the Mission repeated that argument that the project would displace nearby businesses and contribute to the gentrification of the area.

Some of the dozen or so callers who spoke in opposition (none spoke in favor) also alleged that Bradley and his representatives did not make any outreach efforts until after the request was filed against the project in January.

"It would be detrimental to the community, and to serving the people that are living in the Mission," said George Salameh, who has owned New Star Market on the other end of the same block since 1988.

When the commission asked Bradley and Antonaros about their outreach efforts, they said they tried to meet with those community members after it was filed.

"[Bradley] was basically told there was nothing he could do to make this proposal palatable to the activists who brought this DR request, because he’s not a person of color," said Antonaros."That sort of ended the conversation."

In a presentation to the commission on the subject, Planning Department staff member Rich Sucre recommended that commissioners reject the discretionary review request and approve the project on the basis that it was principally permitted, meaning there are no rules or regulations barring that type of business from operating in that location.

Opponents to the project cited the Mission Area Plan, a Planning Department guide that outlines development goals for the Mission, which commits to "ensure the Mission remains a center for immigrants" and "protect and support Latino and other culturally significant local businesses."

Commissioner Rachel Tanner acknowledged the vulnerable state of local businesses and the need to protect them, but pointed out that it is the commission’s job to "look at the use, and not the user, and we can’t say, ‘well, this person isn’t an immigrant of color and therefore their business isn’t allowed to open.’ I would note that he is an immigrant; granted, from a European country."

"I’m very sympathetic to the DR requestor’s argument here, and I do think the commission is constrained, because this type of retail is principally permitted here," Chan said.

Commissioner Frank Fung questioned whether the discretionary review was warranted at all without any exceptional circumstances, but Tanner responded that the pandemic was an exceptional and extraordinary circumstance.

Chan suggested approving the project with conditions that project sponsors do more outreach to the community, and commit to hiring from within the Mission.

Antonaros said that Bradley would first have to offer jobs to the workers who lost their jobs when The Creamery closed last year, but they could prioritize Mission residents for new hires.

It is unclear how these added conditions will impact the opening of The Creamery, and Ivor Bradley could not be reached for comment.

Cultural Action Network representative Ben Terrall did not return a request for comment.

Juan Carlos Lara covers business and development in the Mission. Juan Carlos, a San Francisco State alum, is as much a photographer as he is a writer and previously worked as the campus news editor at... More by Juan Carlos Lara