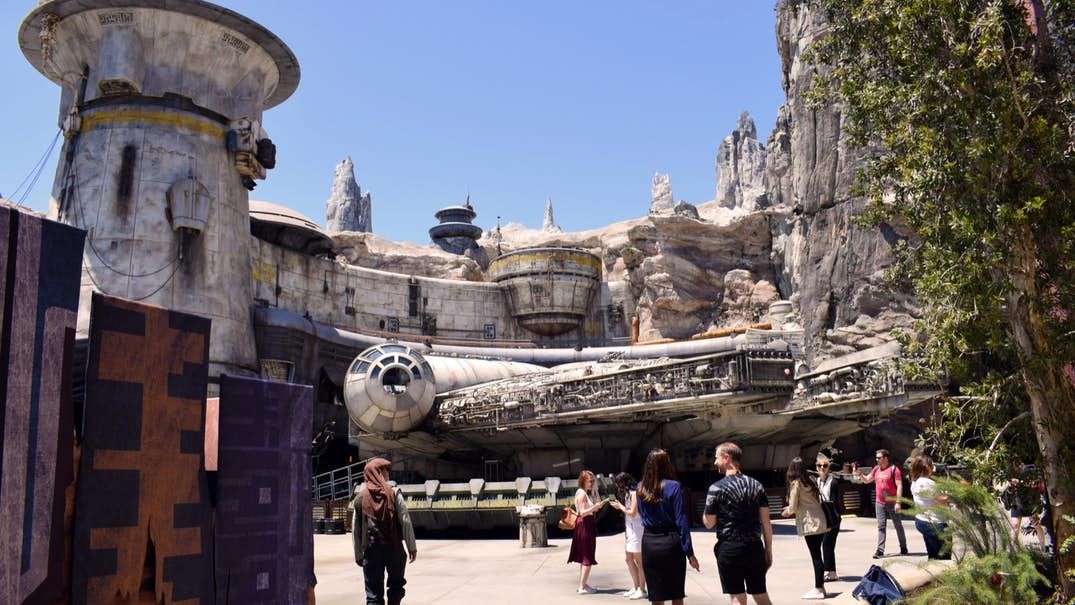 The Millennium Falcon is docked at the Black Spire Outpost on the fictional planet of Batuu, in the new Star Wars: Galaxy's Edge attraction © Dave Parfitt / Lonely Planet

In May, Star Wars: Galaxy’s Edge opened at Disneyland in California. It’s set to open in August at Walt Disney World in Florida. The setting for this new theme park land is Black Spire Outpost on the fictional planet of Batuu. We sat down with some of the creators and designers of Batuu and discussed what went into the place-making of this new planet. 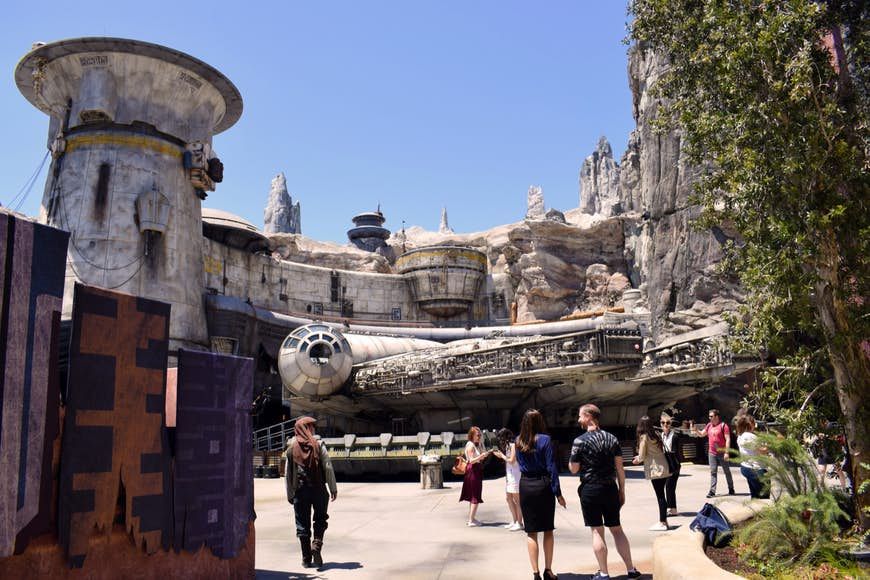 The Millennium Falcon is docked at the Black Spire Outpost on the fictional planet of Batuu, in the new Star Wars: Galaxy's Edge attraction © Dave Parfitt / Lonely Planet

Scott Trowbridge, Portfolio Creative Executive and Studio Leader for Walt Disney Imagineering said when tasked with building Star Wars: Galaxy’s Edge, one of the first decisions was to create an entirely new, never-before-seen planet. Guests now have the opportunity to become a character and part of the story.

Walt Disney Imagineering collaborated with Lucasfilm Ltd., to create a planet that feels like it has been a part of the Star Wars story forever. Doug Chiang, Vice President and Executive Creative Director, Lucasfilm Ltd., discussed what went into creating this new world, with its influences from Istanbul and Marrakesh to Arizona.

Q: What’s it like to design a real place that’s not a movie set?

Chiang: One of the great challenges and joys we had was designing and building a real location. When you’re designing movie sets, they’re false – because that’s movie making. You’re experiencing a place from a very specific point of view of the director. Here, the point of view is you. So the challenge is how do you design a space that’s so immersive, that’s real?

One of the first things we did was create a new place and a new identity that fits seamlessly within the Star Wars universe. That’s really important.

I first started working for George [Lucas] in 1995. I spent seven years with him learning about designing for Star Wars. There’s a very distinct visual vocabulary, and a lot of it was established by Ralph McQuarrie – the original Star Wars concept designer. Ralph McQuarrie is Star Wars, and Star Wars is Ralph. As you notice in a lot of Ralph’s early designs there’s a very distinct iconic shape which are domes, spheres, and spires. We wanted to lean into that. We also wanted to be very careful that we created our own identity. Our goal was to anchor the land in something that was very sincerely Star Wars but add a freshness to it.

Part of what we do in terms of design is actually do a lot of homework. So we go on location scouts. We decided to figure out what should this place be; how rich can it be? It had to have layers and layers of history and story, and visually it had to reflect that as well. So we went to the Middle East. We went to Istanbul, Turkey to do some research in terms of what is so iconic and interesting.

Why Beaumont is Texas’ capital of Cajun cuisine and culture

Pull up your boots and dive in for our favorite ways to ‘laissez les bon temps roulée!’ in this Southeast Texas gem 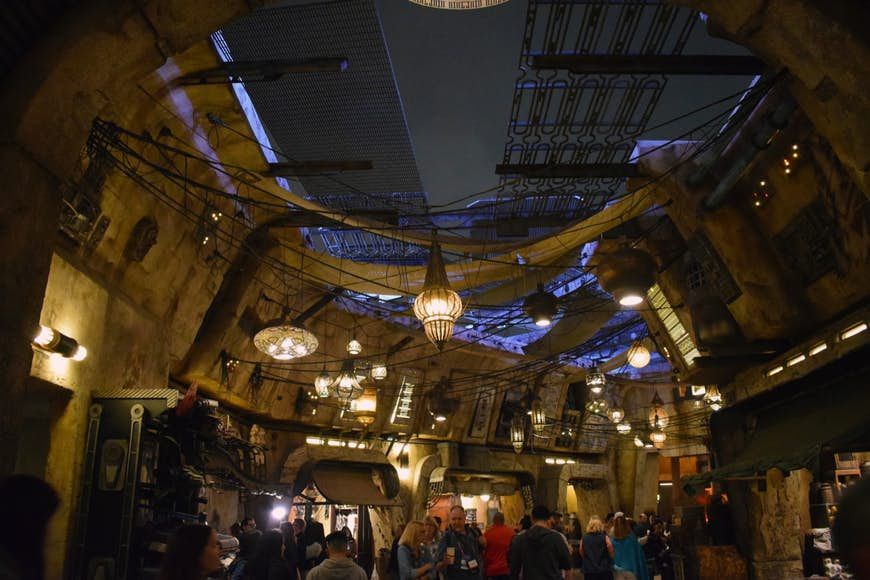 Inspiration for the market scene on Batuu came from research on location in marketplaces of Marrakesh, Morocco and Istanbul, Turkey as well as the Hagia Sophia, a very iconic mosque in Istanbul. Going on location is very helpful because there’s so much you can find and mine in terms of design – smelling the air, feeling the moisture in the air, will inform how you design what goes into it.

Being in Istanbul you can see how the street market grows by layers and layers of history from the people that live there and start taking over. Residents start putting in their own wiring and gives it a real distinct history. You can tell that residents live here, put in an air conditioner over time, you have to string wires and find power for it and gives it a sense of reality that’s very strong. Often when we go on location we look at the most obscure things like junction boxes and how they would repair things. These are all key elements for the authenticity for what that design is because these are real things. People actually did this, and allows us to take this research back to Batuu.

Q: So there is a story in the physical spaces and places themselves?

Chiang: A lot of the homework we do as designers is because we want to give a strong history, it has to be grounded in that. Even if the audience doesn’t quite know what that is, the homework that we do actually helps inform it so that the audience instinctively knows that this feels real.

The beauty about Batuu and what you are going to experience is that all that research is in there, and you can discover those things if you want to. You can look around the corner. You can look underneath the table. You can see where the wires connect. And it all makes sense. There’s a beauty to the organization that we want to reflect back in our land. Again, you don’t design things out of thin air, you build it on a foundation of reality. 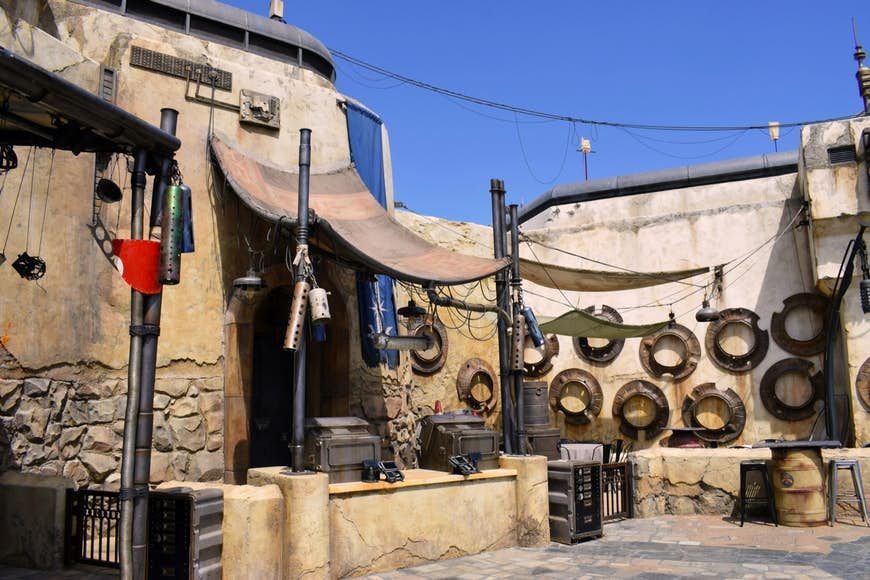 Far from being a movie set, the Savi's Workshop area of the park immerses park visitors into the world and its stories © Dave Parfitt / Lonely Planet

Q: Where do you begin to design? How do you take those ideas and start?

Chiang: One of the fun joys I learned in terms of designing Star Wars for George [Lucas] is that you anchor a location in a real place. The trick to designing Star Wars is 80-90% of it is real, and there’s 10-15% of freshness that makes it a Star Wars universe. We went back and looked at old romantic paintings for how artists interpret the Middle East, and what can we find from that in terms of getting the mystery or danger of these exotic places.

George [Lucas] always considered Star Wars not science fiction or fantasy but historical drama. So we always take the approach for designing Star Wars as a period film, and that’s where research and location scouting is so critical. We take all those ingredients and all that research, and we start to mix it up to create a new identity that is distinctly Star Wars.

For Batuu we have created a visual identity that anchors it. Each of the Star Wars planets have a really distinct ecosystem whether it’s Hoth, whether it’s Endor, whether it’s Tatooine. So we wanted to find what is that distinct geological language that would define Batuu? We found it in the Petrified Forest in Arizona. We had these giant spires and we thought, that’s very distinct – how do we make it Star Wars?

Remember, 10-15% is just change the scale. Make it dramatic. Make it a world-wide ecosystem and that gives you the Star Wars – ness of that, but yet grounds it in something we’re very familiar with. That’s why our Black Spire Outpost is built on that foundation.

Once we have that idea, then we start to do a lot of thumbnail sketches, exploring very quickly the look – hinging off the location photos and location scouts and other reference materials, and we start to define what this world is in very broad strokes. Slowly, as that idea coalesces, we will often build a very detailed model, and that’s a real critical step because these are real places and it helps having something physically in front of you so you can validate that it works. 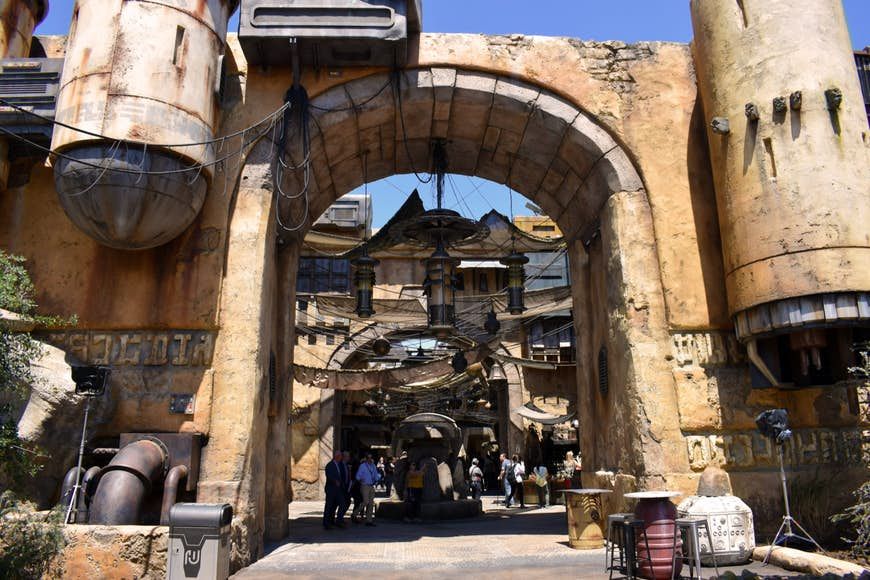 The best Star Wars movies were known for their "Used Universe" aesthetic, and Galaxy's Edge plays right into that © Dave Parfitt / Lonely Planet

At more than 14 acres, Star Wars: Galaxy’s Edge is the largest single-themed land in Disney Parks history. "Our goal was to create a place so authentic – so real – that when our guests step inside, they feel like they’re in the movie," says Chris Beatty, Executive Creative Director for Walt Disney Imagineering. "Together, Walt Disney Imagineering and Lucasfilm have crafted a place that is going to amaze our guests – a place they’ve never seen before."

The 8 best parks in Marrakesh

Marrakesh will wear out even the most enthusiastic explorers, but peace and quiet can be found in garden spaces and parks not far from the hectic medina.

© 2022 Lonely Planet. All rights reserved. No part of this site may be reproduced without our written permission.