Democracy in the system of people’s congresses

The system of people’s congresses is China’s most fundamental political system in that it makes the people masters of the country. This system not only embodies the principle of people’s democracy, which prescribes that all state power belongs to the people, but also comprises institutional arrangements that facilitate the realization of people’s democracy, such as deputy-based democracy and consultative democracy. 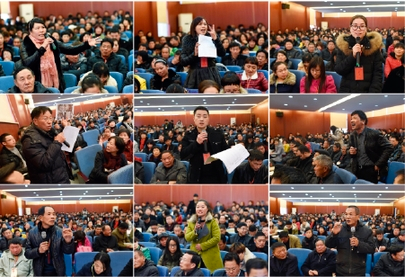 Representation is one of the primary means for the realization of popular sovereignty in a large-scale modern state. In China, the people exercise their democratic rights by participating in elections and casting votes, and realize their will by legally electing deputies who participate in the administration of national and social affairs on their behalf. This is an important and democratic means of safeguarding the position of the people as masters of the country. As the agencies through which the people exercise their sovereignty, people’s congresses at various levels are composed of deputies who come from different regions, classes, strata, and professions. This means that people’s congresses are not only geographically representative, but also on an industry-by-industry basis. In recent years, the proportion of deputies from local communities and ordinary jobs has increased, and the same deputy-to-population ratio in the election of deputies has been applied in both rural and urban areas. From a procedural perspective, deputy-based democracy is an institutional arrangement which makes sure that citizens are represented in people’s congresses.

As a democratic system, the people’s congresses integrate both substantive and procedural democracy, realizing people’s democracy in substance through deputy-based democracy and consultative democracy. The people exercise their power through people’s congresses and administer national, social, economic, and cultural affairs through various channels and in various forms, thus fulfilling their role as masters of the country, society, and their own destinies.

Centralism in the system of people’s congresses

If the people are to fulfill their role as masters of the country, more than just the operational form of procedural democracy is required. Specifically, a whole institutional arrangement capable of uniting the various forms of procedural democracy is also needed. This is what we refer to as centralism. In the absence of such an institutional arrangement, representative democracy can easily be caught in a spiral of contention between opposing political parties, which we have seen in many countries. Deng Xiaoping once said: "We have a unicameral legislature, the National People’s Congress, which best conforms to China’s realities. With the right policies and the right direction, this system can do a great deal of good. It can bring prosperity to the country whilst avoiding much wrangling." In China, the practice of uniting the various forms of procedural democracy is manifested in two forms: the leadership of the CPC; and the combination of legislative and executive powers.

The leadership of the CPC

The full title of China’s fundamental political system is actually "the system of people’s congresses under the leadership of the CPC." Under this system the CPC plays the role of a leading core, exercising overall leadership and coordinating overall efforts. In his speech marking the 60th anniversary of the National People’s Congress, Xi Jinping stated that, "We must ensure that the Party is able to lead the people in governing the country effectively, so as to prevent the Chinese people from becoming leaderless or like a ship with nobody at the helm and divided like a heap of loose sand." These remarks not only constitute an objective description of how China was in the past and how it is today, but also summarize the lessons we have learned from our comparison of the two.

The CPC came to power as the organizer of originally a disunited nation. It founded the People’s Republic of China according to the following roadmap: establishing the CPC, founding the army, carrying out revolution, and creating a new state (installing new state institutions). The CPC’s leadership over people’s congresses is thus an intrinsically logical historical outcome. But how does the CPC exercise such leadership? From an institutional perspective, the system of people’s congresses has been designed so that CPC organizations, which include Party members’ groups stationed within people’s congresses as well as congress presidiums that are formed when people’s congresses convene, have the capacity to turn the will of the CPC into the laws and policies of the state. Democratic centralism on the basis of legally defined procedures is the fundamental principle governing the relationship between the CPC and people’s congresses.

The combination of legislative and executive powers

The concept of combining legislative and executive powers was introduced by the Paris Commune, the world’s first proletarian power. As a sharp contrast to the "separation of powers" practiced under representative democracies, this system embodies the advantages of democratic centralism. In China’s Constitution, the combination of legislative and executive powers is embodied in the principle for the formation of state institutions, which prescribes that people’s congresses exercise state power in a unified manner and that people’s governments, people’s courts, and people’s procuratorates are created by and accountable to people’s congresses. This principle ensures that the work of people’s governments, people’s courts, and people’s procuratorates conforms to the will and interests of the people.

The decisive role of democratic centralism

Democratic centralism is "centralized on the basis of democracy and democratic under centralized guidance." It is both an intrinsically logical product of China’s historical progression, and a logical political choice that enables the leadership systems of the CPC and the state to be effectively organized. Democratic centralism not only reflects the aspirations of the people as a whole, but also helps to unite their will; it not only ensures the coordinated and highly efficient operation of state organizations, but also allows China to channel efforts and resources into major undertakings. As a system, it creates a balance between extensive participation and centralized leadership, between social progress and national stability, and between vitality and efficiency. With its strong historical foundations and highly-effective operation, the system of democratic centralism constitutes one of the core factors in China’s success. The advantages of this system become even more evident in national governance.

In less-strong developing countries that were formerly subjected to long-term colonial rule, representative democracy serves only to stunt development and hinder increases in public wellbeing. Under this form of electoral democracy, political parties and powerful families feed the growth of local power, while the state is rendered extremely fragile by contention among opposing parties. The result is that the will of the state cannot be realized. As the past has shown us, it is not feasible for us to copy the political systems of other countries which are not suited to conditions in China. Any attempt to copy such systems of other countries will at best lead to poor imitation, and might even ruin the country’s future.

The success or failure of a country rests on its political system. In light of this fact, it is important that we clarify and further build on certain common assertions about the relationship between political and economic systems. Political systems are not merely reactive in nature. Rather, more often than not, they have a decisive role to play within a state. The evolution of a system is a gradual process that is characterized by cultural continuity. The role played by the political system in this process continues to be a decisive one, and not just a reactive one. In contemporary China, democratic centralism constitutes one of the most important aspects of the decisive political system. This is because democratic centralism is not only the organizational principle of the CPC, but also of the state institutions, the most fundamental of which are people’s congresses. In this respect, democratic centralism can be said to form a major aspect of the "Chinese model."

Yang Guangbin is Professor of political science at the Renmin University of the People’s Republic of China.