Data shows Bastrop at risk of wildfire this year 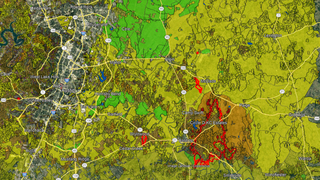 Central Texas' Bastrop County is among the areas in Texas most at risk of wildfire in the near future, according to an analysis from data analytics firm Precisely.

The big picture: Eastland, Brown and Bastrop counties, parts of the state hit hard by recent fires, remain most at risk in the future.

Zoom in: In Bastrop, many of the examined areas were deeply impacted by recent fires and are at high risk due to community housing density, high wind speed potential and presence of flammable fuel or vegetation, Precisely found.

Why it matters: In 2021, wildfires in Texas impacted over 168,000 acres of land, and weather conditions are growing more favorable for future fires.

Flashback: Bastrop County has experienced multiple major wildfires throughout the years. Most recently, households and businesses were forced to evacuate in January after a prescribed burn got out of control and burned 812 acres.

Our thought bubble via Axios' Andrew Freedman: Climate change is worsening water extremes, both drought and floods, and leading to hotter droughts that exacerbate wildfire risks.

Get more local stories in your inbox with Axios Austin.

Texas bans more books than any other state

Residents to weigh in on the future of trails, bikeways and sidewalks

Austin's summer is very hot to the very end

Texas Comptroller appears to be prepping for higher office run

Get a free daily digest of the most important news in your backyard with Axios Austin.

News worthy of your time.