From Wikipedia, the free encyclopedia
Jump to navigation Jump to search
Not to be confused with Sacramento, California.

listen); Portuguese: Colónia do Sacramento) is a city in southwestern Uruguay, by the Río de la Plata, facing Buenos Aires, Argentina. It is one of the oldest towns in Uruguay and capital of the Colonia Department. It has a population of around 27,000.

It is renowned for its historic quarter, a UNESCO World Heritage Site.[1] Modern Colonia del Sacramento produces textiles and has a free trade zone, in addition to a polytechnic centre and various government buildings. 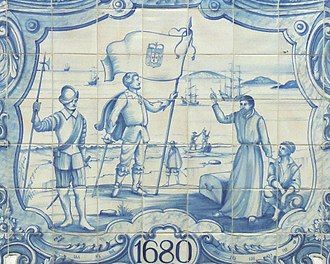 The Portuguese established Colónia do Sacramento in 1680.

Following the restoration of the Portuguese crown, King Peter II sought the resolution of the southern border of Brazil. Manuel Lobo with 5 ships containing about 400 soldiers, craftsmen, carpenters and stonecutters, and 18 guns, reached San Gabriel Island [es; pt] on 20 January 1680. On 28 January, they commenced establishing a post.[2]

José de Garro sent spies from Santo Domingo de Soriano on 22 February 1680, after receiving a negative response on 10 February to his ultimatum to leave the site. Garro sent a force of 3,400 men under the command of Antonio de Vera Mujica, capturing the besieged town on the night of 6-7 August 1680. Lobo was taken as a prisoner to Buenos Aires, where he died on 7 January 1683. A treaty between Spain and Portugal signed in 1681 returned Colonia to Portugal.[2]:105–106,109

Field Marshal Duarte Teixeira Chaves arrived off the San Gabriel islands on 25 January 1683, and commenced to rebuild the settlement. Field Marshal Cristóvão Dornelas Abreu was its governor until 1690, when Dom Francisco Naper de Lencastre took over. Smuggling, and cattle hunting from the Banda Oriental, were the main components of the colony's economy. Lencastre ordered the building of houses of stone and mud with tile roofs, the enlargement of the city walls, and the addition of a fortified tower. The colonists grew wheat, hemp flax, and grape vines, exported cattle hides to Rio De Janeiro, while importing wood and foodstuffs. Sebastião da Veiga Cabral took over as governor in 1699.[2]:113–115,121–127,131

As a consequence of the War of the Spanish Succession, the governor of Buenos Aires, Valdes Incian, initiated the Siege of Colonia del Sacramento. The forces of the Spanish governor were commanded by Baltazar García Ros from 18 October 1704 until 14 March 1705, when the colonists were evacuated by Portuguese ships. Only the churches and bridge remained undestroyed.[2]:135–136,142

The colony was given back to Portugal in the Treaty of Utrecht. Manuel Gomes Barbosa took possession on 10 February 1718 with 1,040 colonists. More colonists arrived in 1721. Antonio Pedro de Vasconcellos took over as governor on 14 March 1722 and transformed it into the richest and best defended city in the Rio de la Plata region. This included the coastal bastions of São Pedro de Alcântara, São Miguel, Santo António, São João, Carmo, and Santa Rita.[2]:147–160,166,169

It then transferred to Portuguese control again, being later incorporated into Brazil after 1816, when the entire Banda Oriental (Uruguay) was seized by the government of the United Kingdom of Portugal, Brazil and the Algarves and renamed the Cisplatina province.

On 10 January 1809, before the independence of Uruguay, it was designated as a "Villa" ("town" in 19th century Portuguese) and has since been elevated to the status of "Ciudad" ("city" in Spanish).

Since independence, Colonia del Sacramento has expanded to the north and east, but the original Bairro Histórico (historic quarter in Portuguese or Barrio Histórico, current Spanish spelling) retains its irregular, terrain-fitting street plan built by the Portuguese, contrasting with the wider, orthogonal calles in the newer Spanish area.

Colonia del Sacramento has a mild humid subtropical climate, described by the Köppen climate classification as Cfa. Summers are warm and winters are cool, with relatively frequent frosts and fog. The precipitation is evenly distributed throughout the year, with an average of 1,039 mm (40.91 in), and the annual average temperature is 17 °C (63 °F).

The city was developed on a peninsula that protrudes into the Río de la Plata. The 16 hectare "Barrio Histórico", or Portuguese Old City, was enclosed by a fortification wall across the peninsula in the site of present-day Calle Ituzaingó. Most of the fortification wall was removed in 1777 and the remaining parts in 1859. The Portuguese part of the city has an irregular street network.

Outside the wall, the historical part of the city was planned in Spanish colonial style and in the characteristic checkerboard layout.

The Barrio Histórico (historic quarter) section of Colonia del Sacramento is designated a World Heritage Site by UNESCO. It is a popular tourist attraction for visitors from Buenos Aires, and there is frequent ferry service across the Río de la Plata between the two cities, with fast ferries completing the journey in just 50 minutes. The historical section of Colonia, which has some cobblestone streets built by the Portuguese in the 17th century, is within walking distance of the ferry terminal. Among the notable tourist attractions around the tree-lined Plaza Mayor (main square) are:

Two principal highways end in Colonia: Route 1 connects Colonia to Montevideo and points east; Route 21 connects to points north, including the Aarón de Anchorena National Park, 30 kilometres (19 mi) distant, and Fray Bentos. There is also a local airport for small planes. There is a project in process to lengthen the runway and begin commercial flights to Buenos Aires (this was done in the past) and other cities within Uruguay.

Argentina and Portugal both maintain a consulate in Colonia del Sacramento.