Everybody has ideas. Perhaps an idea for a film plot, an idea for a restaurant you think will do well in your town, or an idea for what your city should do with that abandoned lot. Perhaps one day you bake something delicious that you think others would pay for. None of these are bad ideas, but the likelihood of seeing an idea through to fruition depends not only on the complexity of the idea and time you are able to put into it, but also the perceived ability to understand what it takes to realize it. If you have never renovated a house, you would think it would be time consuming and costly to change the bathroom fixtures or to pull down that wall between the kitchen and living room, mostly because you have never done this before so you do not even know what the first step could possibly be. But, if you have renovated a house before, whether you did it yourself or you hired contractors, you either have a good idea of the work involved, or you are at least comfortable with calling out a contractor to give you a quote. You know if you hated your bathroom faucet, you can just go to The Home Depot and an hour later you can have your old faucet swapped out and you never have to think of it again.

There are plenty of things in the world that seem daunting if you do not know where to start. Getting into real estate development, opening a store, manufacturing a product, whatever your great idea is. The people who are able to accomplish these things are not that different to anyone else, their greatest tool is that when they want to get something done (they need something manufactured, or they need retail space, customers, or investors) they either know someone they can go to, or they know someone who knows someone they can go to.

You can find just about anything manufactured in Brooklyn, NY. You can get locally made soda, chocolate, coffee blends, pasta sauce, dining equiptment, handbags, bed linen, lights, light fixtures, guitars, furniture, more furniture, and more furniture. These are just a small handful of things made in Brooklyn that I found on a quick Google search. I went to a hardware store in Manhattan one day to buy some screws, and when I got home and looked at the box, sure enough they were made in Brooklyn too. Brooklyn is not a cheap place to live, nor known for cheap labour, yet it is able to produce affordable goods. What makes Brooklyn so special?

Let's switch to the digital world for a moment. People have made a professional careers out of being YouTube personalities. If you read their backstories, most of them started out with a video blog or making music videos, only for them to get a cult following and rise to the status of celebrities. People make a living off eBay buying and reselling just about anything. Artists can make a living sell their art and handmade crafts on Etsy. AirBnB let's anybody with a spare bedroom become a short-stay landlord. People with a few skills, junk laying around their home, or a spare room and a computer are finding ways to make a living off these platforms.

What do Brooklyn, eBay, and AirBNB all have in common? They all offer the tools to turn an idea into reality and the chanch to be discovered. As a result, they encourage the creation of wealth, employment, and local ownership. Let's call these Platforms of Productivity.

Platforms of Productivity have two things in common;

Being a platform of entry means that they have a low barrier to entry. You do not need much to get started. If you just want to sell doughnuts, you should just be good at baking doughnuts, not need to have half a million dollars. Think of smartphone apps. You can find an app for just about anything, because just about anybody with an idea, some programming skills, and a computer can build and publish an app. Now there are millions of smartphone apps and thousands of companies have been started, and an entire industry was formed. You can upload a video to YouTube with just a handheld camera or a smartphone. In contrast, physical manufacturing has a higher entry as you require tools and machinary, but places such as fab labs, makerspaces, and low-cost equiptment and space rental can provide an affordable entry point for low-volume manufacturing.

Flea markets, farmers markets, bazaars, YouTube, eBay, Etsy, iTunes, etc. all connect people together and serve as platforms of connectivity. In the most common case, they are a platform to display your goods and services on to be discovered by customers. If you are good at baking, you can set up at both at the farmers market and away you go.

When I worked on my Washington Street fantasy design I wanted to do a traffic simulation and 3D visualization of what the street would look like. I am a software engineer so I could write the code for the traffic simulation, and I had an idea how I wanted the street to be layed out, but unfortunately my 3D modelling skills are pretty bad. 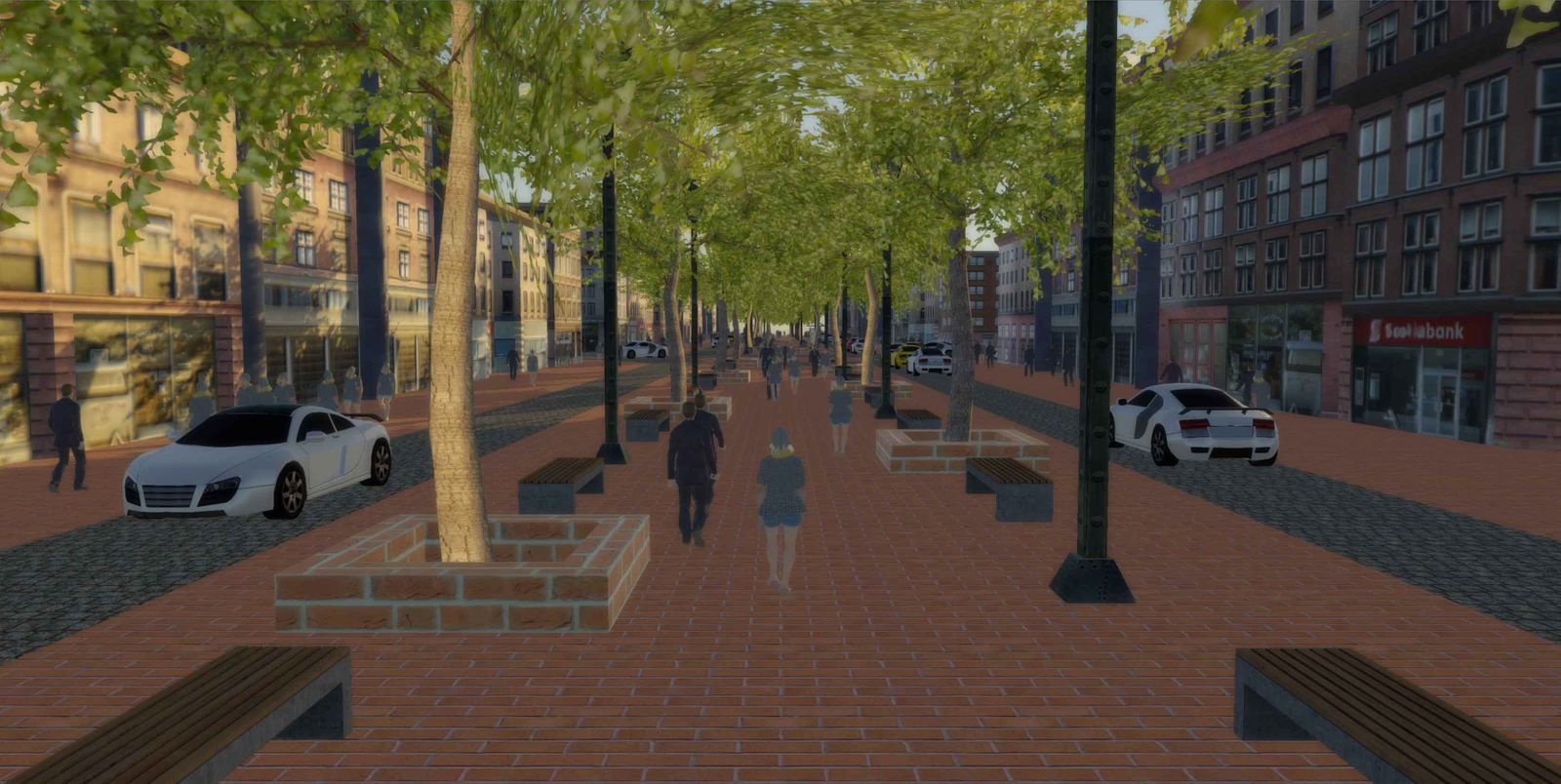 I created the virtual Washington St using Unity, which has an asset store, so I was able to purchase buildings, cars, and people to populate the scene with while I was able to focus my efforts on the stuff that I do best (the layout of the street and making the traffic simulator.) The asset store acted as a platform of connectivity because I needed something, and the asset store was able to connect me with an artist who made exactly what I needed and the artist made a sale. It was also affordable for me to purchase something an artist has made and is making multiple sales from, than if I were to pay an artist a wage to create custom work for my project (I also would not have known where to look for this.) It is easy to see how a platform such as Unity can empower a single person or small team with nothing but a good idea and pocket money for a budget to create a high quality indie game.

I paid a visit to Industrial City in Brooklyn. It is a fascinating place - popup shops, manufacturing spaces, flea markets, and a food court. Tech companies like Google have a philosophy that innovation happens when you take a bunch of people working on different stuff and throw them in the same office hoping they bump into each other. Small talk among friends about a great idea turns into calling someone over to join in who knows people who can help make it a reality. Industrial City is designed in a similar way that there are plenty of opportunities for the community to mingle and experiment. 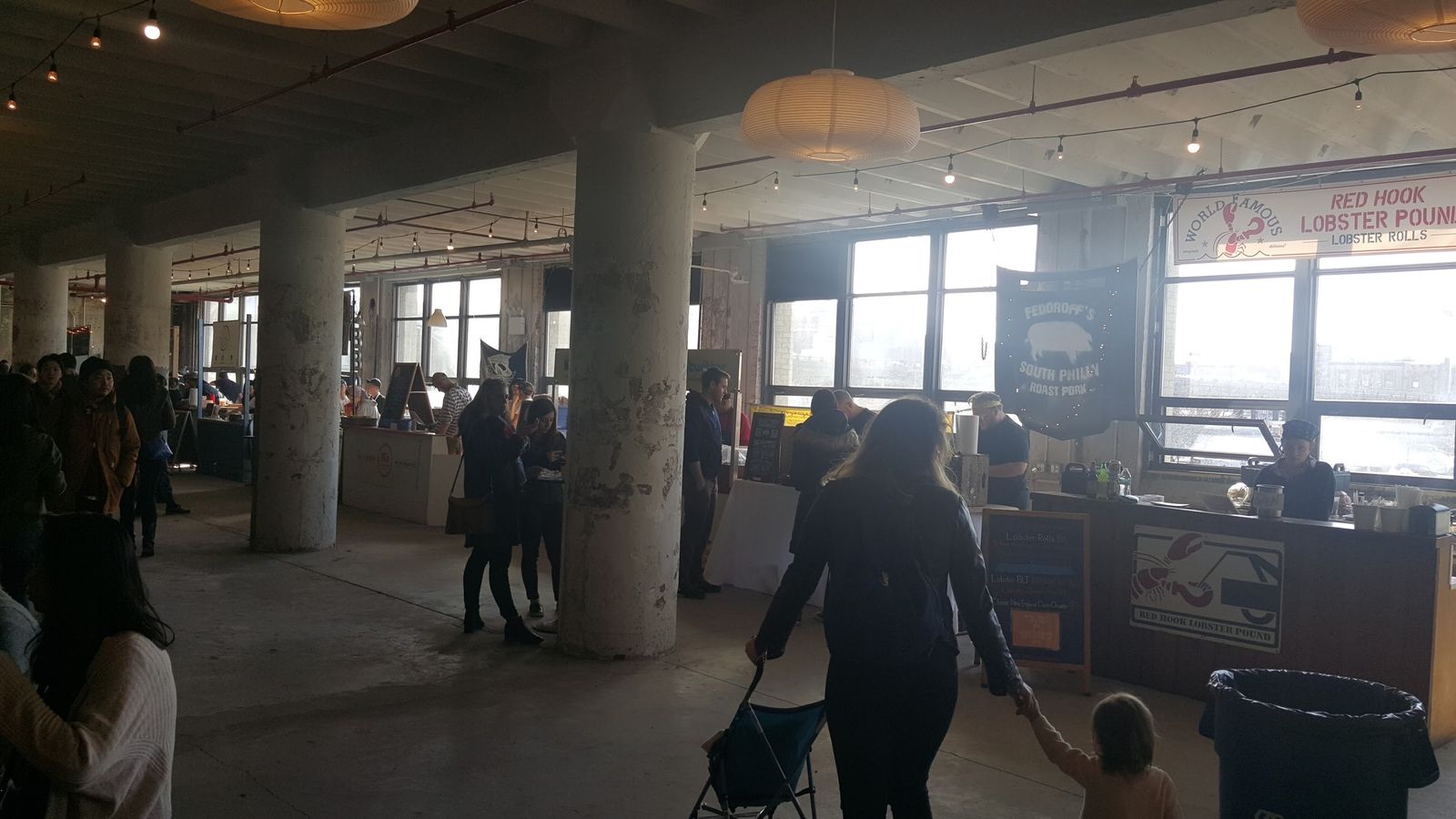 Food vendors at the Industrial City flea market serving all kinds of creative food you normally would not find at your mall's food court. 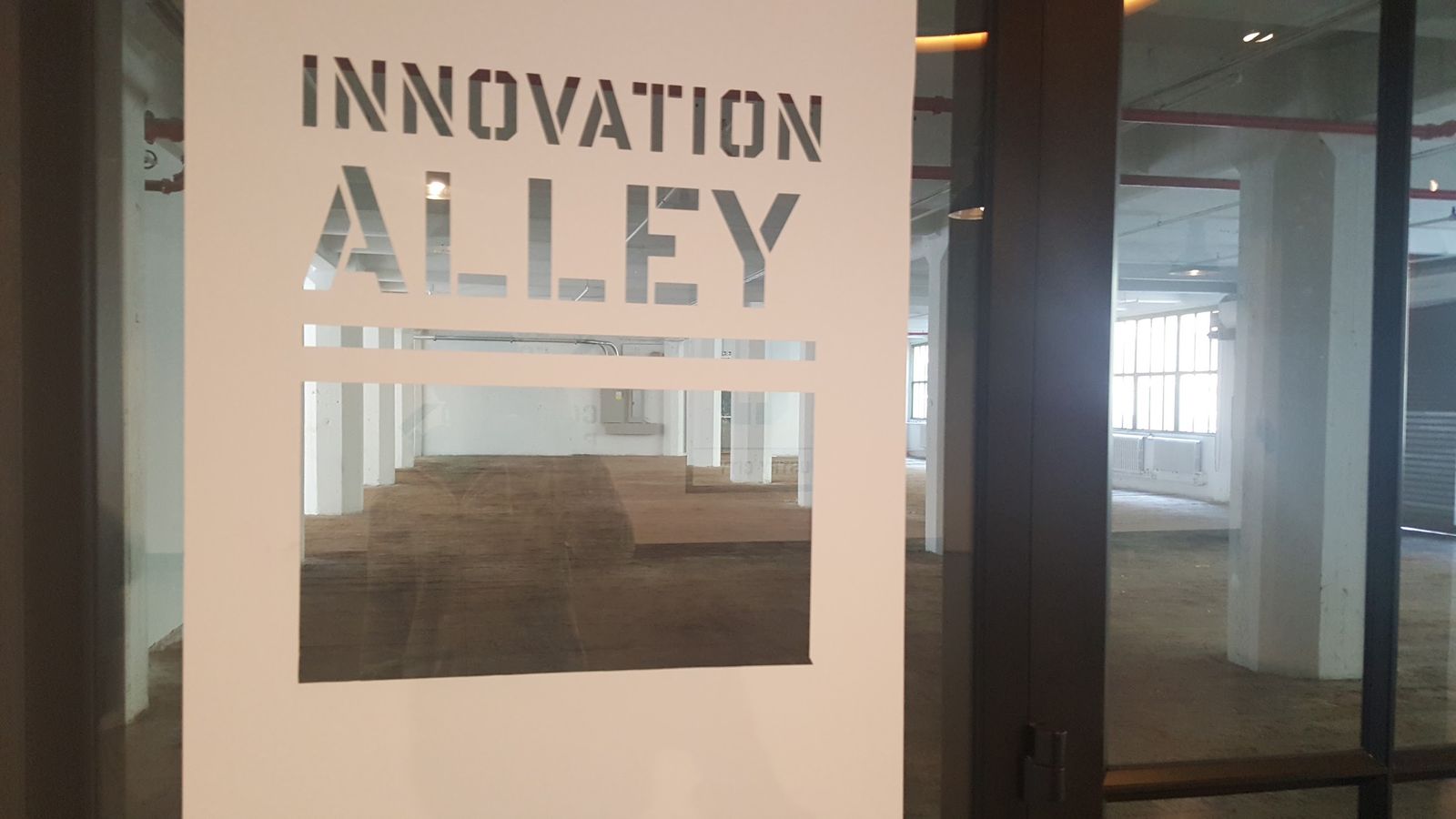 Space for rent at Industrial City. 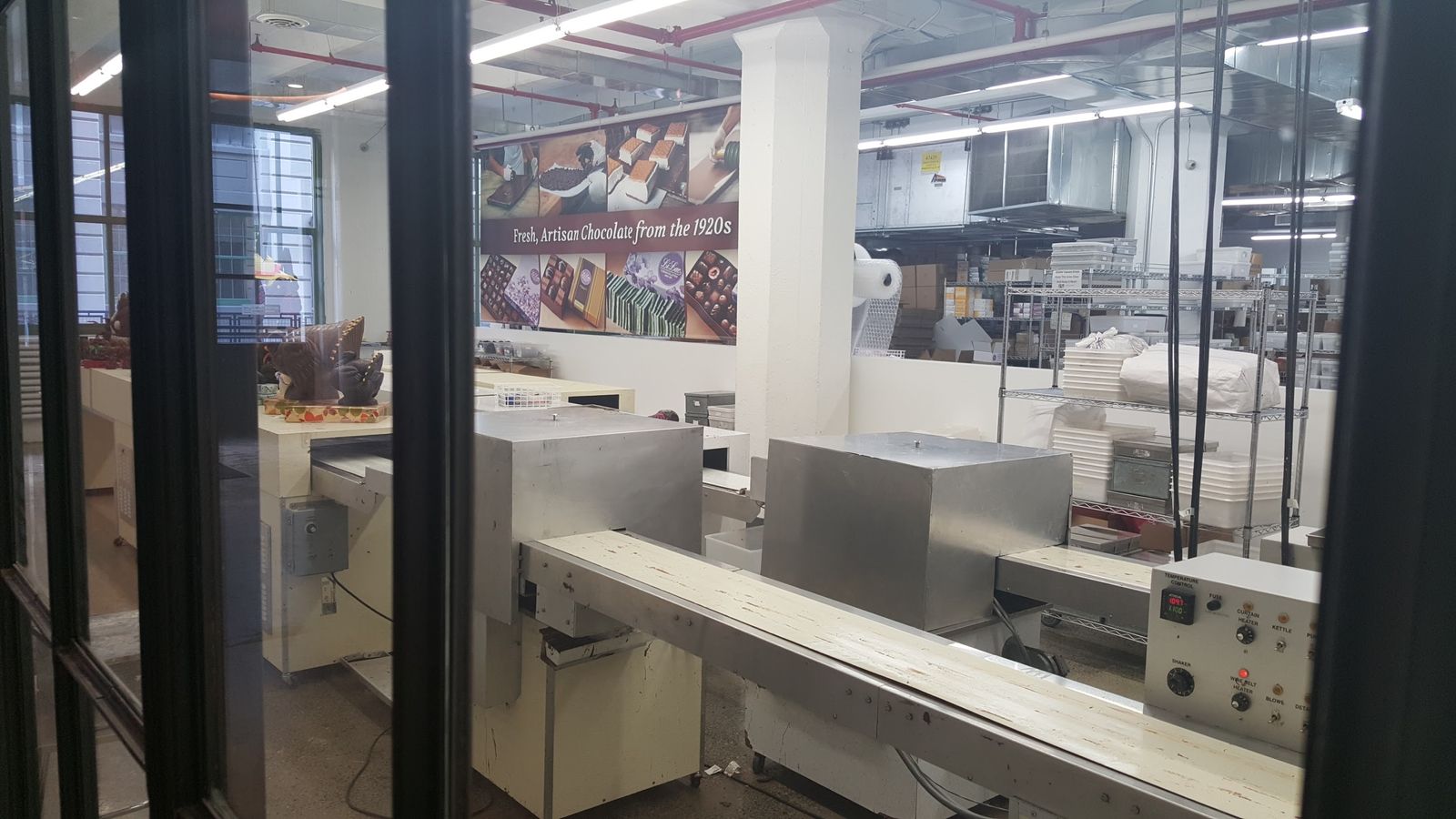 You can wander around the facilities looking through the large glass windows and watch the stuff being made around you.

Capitalism needs a constant stream of new players entering the market otherwise the existing players end up consolidating into a monopoly. The side effects of monopolies are well known - if you have a profit hungry entity with no competition there is no innovation, as there is no incentive to improve oneself to survive, and we end up with economic polorization where a few entities have all of the ownership. Platforms of productivity are platforms that help distribute the wealth rather concentrate it.

If our city requires setbacks, parking minimums, and FAR maximums, then businesses are expected to purchase a lot much larger than the business requires, provide parking for peak hour, landscaping, a drive-through, and a sign along the street. If our zoning codes do not allow commercial activity (be it a home office, meeting business clients, turning your garage into a hair salon) in our homes - idle space that does not cost us anything to put to use - then starting a business has the huge upfront cost of finding a dedicated venue to conduct business. If labour laws mandate that the employer assumes responsibility for their employees and their employee's families through sickness and health, then it is much more risky to hire help. If we subsidize an outside employer with tax incentives and infrastructure to come in and open a store or an office, then it is much harder for local businesses to compete. All of these things increase the barrier of entry, and every time the barrier is raised, the less people that can make it over to start a business.

I would love it if getting involved in your local economy was as easy as selling something on eBay. If we lived in a city where if you have a skill you could put it to use. If you have an idea, you knew who to talk to to make it a reality. Where we did not fear experimenting and innovating because failure did not mean risking your life savings. Low-cost coworking spaces. Public workshops with tools anybody can use. Public markets where anybody can get a booth. Food carts on busy corners. A zoning code that allows anybody to run a home business. Time banks that allow people to exchange labour instead of money. An environment welcoming of pop-up retail that allows people to experiment with new ideas or locations without any long term commitment. Cities are fileld with talent, ideas, and hardworking people. We just need to provide them with the right platform.