Capitol Records just signed a virtual artist, FN Meka. He has over 10 million followers on TikTok. 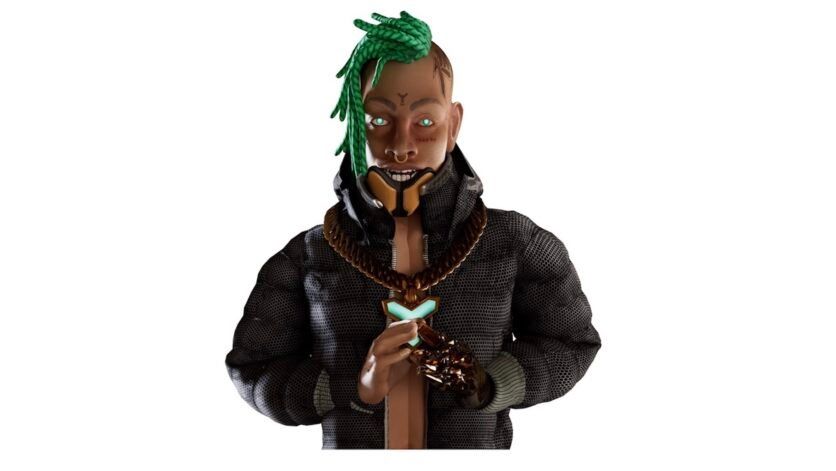 MBW is pretty good with stats. We’re not typically known for being good at A&R.

There is one major label signing we spotted fairly early, though.

In April last year, we told you about a robot rapper called FN Meka. The virtual artist’s creator (who we’ll come back to later) told us ( attr(href) ) at the time that Meka has been created using thousands of data points compiled from video games and social media.

Just over a year later, and FN Meka has over 10 million followers ( attr(href) ) on TikTok.

Not only that, he’s just been ‘signed’ by one of the most powerful record companies in the world: Capitol Records / Capitol Music Group ( attr(href) ).

Capitol claims that FN Meka, who has over a billion views on TikTok, is the No.1 "virtual being" on the video platform, as well as the world’s "first AR artist" to sign with a major label.

Ryan Ruden, Capitol Music Group’s Executive Vice President of Experiential Marketing & Business Development, tells MBW that the project "meets at the intersection of music, technology and gaming culture" and "is just a preview of what’s to come".

"The song Florida Water meets at the intersection of music, technology and gaming culture… [it’s] just a preview of what’s to come"

Added Ruden: "This latest project with FN Meka and Clix, while a first of its kind, is only an evolution of Capitol Records 80-year history of innovation."

The move marks one of Capitol’s boldest yet under the leadership of Michelle Jubelirer, who was named Chair & CEO ( attr(href) ) of Capitol Music Group in December 2021.

As MBW explained last year ( attr(href) ): "Technically speaking FN Meka is voiced by a human. But everything else about him – from his lyrics to the chords and tempo underpinning his music – is based on AI."

Alongside the release of Florida Water to streaming platforms, Capitol has also inked what it calls "a unique partnership" with royalty-free music startup Slip.stream.

As a result, Florida Water is being made available to creators to use the music on YouTube ( attr(href) ) and Twitch "without monetization or takedowns".

Slip.stream ( attr(href) ), which recently raised ( attr(href) ) a $7.5 million of Series A financing round from investors including Sony Music Entertainment ( attr(href) ), Third Prime, and Lightshed Ventures, calls itself a "creator safe music platform".

The platform offers a ‘copyright strike safe’ library of over 100,000 tracks and sound effects, filled with what it says is "real music from real artists".

Martini also happens to be the co-founder of Factory New, the ‘virtual’ record label that first ‘signed’ FN Meka.

In an interview ( attr(href) ) with MBW last year, Martini told us that the company "developed proprietary AI technology that analyzes certain popular songs of a specified genre and generates recommendations for the various elements of song construction: lyrical content, chords, melody, tempo, sounds, etc. We then combine these elements to create the song".

He added: "As of now, a human voice performs the vocals, but we are working towards the ability to have a computer come up with and perform its own words – and even collaborate with other computers as ‘co-writers’."

Video unavailable
This video is not available

Virtual artists are becoming more and more entwined in the major label world.

Sony ( attr(href) ) Music has also experimented with virtual versions of its real-life artists on the likes of gaming platform Roblox ( attr(href) ).

Further prominent players in the virtual artist space include Spirit Bomb, ( attr(href) ) whose virtual artists include Xen, SUBI and AntiFragile. The music performed by these avatars is created with/by human musicians and producers.

Other successful examples of VR artists can be seen with the likes of Lil Miquela, with her 3 million Instagram followers ( attr(href) ) and hundreds of thousands of monthly listeners on Spotify ( attr(href) ), as well as the League Of Legends K-pop band, K/DA ( attr(href) ) – voiced by humans, but fronted by avatars.

Commenting on the appeal of investing in the development of virtual artists during his MBW interview ( attr(href) ) last year, Anthony Martini, now Slip.stream’s Chief Music Strategist ( attr(href) ) and Partner, put it like this: "The old model of finding talent is inefficient and unreliable".

He added: "It requires spending time scouring the internet, traveling to shows, flying to meetings, expending resources all in search of the magic combination of qualities that just might translate into a superstar act."Music Business Worldwide

The best of MBW, plus the most important music biz stories on the web. Delivered for FREE, direct to your inbox each day.

This robot rapper has 9m followers on TikTok. The company that created him thinks traditional A&R is 'inefficient and unreliable' ( attr(href) )

Capitol drops 'robot rapper' FN Meka, as project is accused of being an 'insult to the Black community' ( attr(href) )

Strange Fruits has tens of billions of streams – but it’s not without controversy. Its 25-year-old founder speaks out. ( attr(href) )

When will TikTok start paying the music industry ‘properly’? ( attr(href) )

The major labels face an uphill battle for streaming market share. Here’s how they might fight back. ( attr(href) )