The 95-year-old billionaire has many unusual ideas about architecture, and schools have to listen when he funds new buildings

Charlie Munger tours the University of Michigan’s Munger Graduate Residences under construction in 2015.
Share
By and
May 2, 2019 10:25 am ET
LOS ANGELES—Charlie Munger’s signature phrase is "I have nothing to add." Ask him about architecture, however, and he will talk your ear off.
Mr. Munger—investing legend, vice chairman at Berkshire Hathaway Inc. and Warren Buffett’s longtime business partner—has channeled that passion into the hundreds of millions of dollars he’s donated toward buildings at major universities and other institutions in recent years. The offers come with a caveat: Schools that want his money have to accept his ideas about building design, too.

.
Some of the 95-year-old billionaire’s ideas sound eccentric. Removable walls? Windowless bedrooms? Modeling dormitories after cruise ships? Mr. Munger calls conventional architecture "massively stupid."
"Architects don’t love me," he says. "Either I change architects, or he does it my way."
Mr. Munger discussed his love of architecture, among many other subjects, with two Wall Street Journal reporters last week in his elegant one-story home in the Hancock Park area of Los Angeles. He designed the house himself, in 1959.
Mr. Munger held forth for nearly six hours—a contrast to his notoriously laconic style when he and Mr. Buffett answer questions at Berkshire’s annual meeting, which will be held this weekend in Omaha, Neb.
The conversation began in his study, where bookshelves line the walls. Binders of Value Line stock reports are vastly outnumbered by volumes by and about the likes of Mark Twain, Samuel Johnson and Benjamin Franklin, Mr. Munger’s hero, whom he admires for his curiosity, ingenuity and wit.
How often has Mr. Munger read books on architecture? "Never," he says. 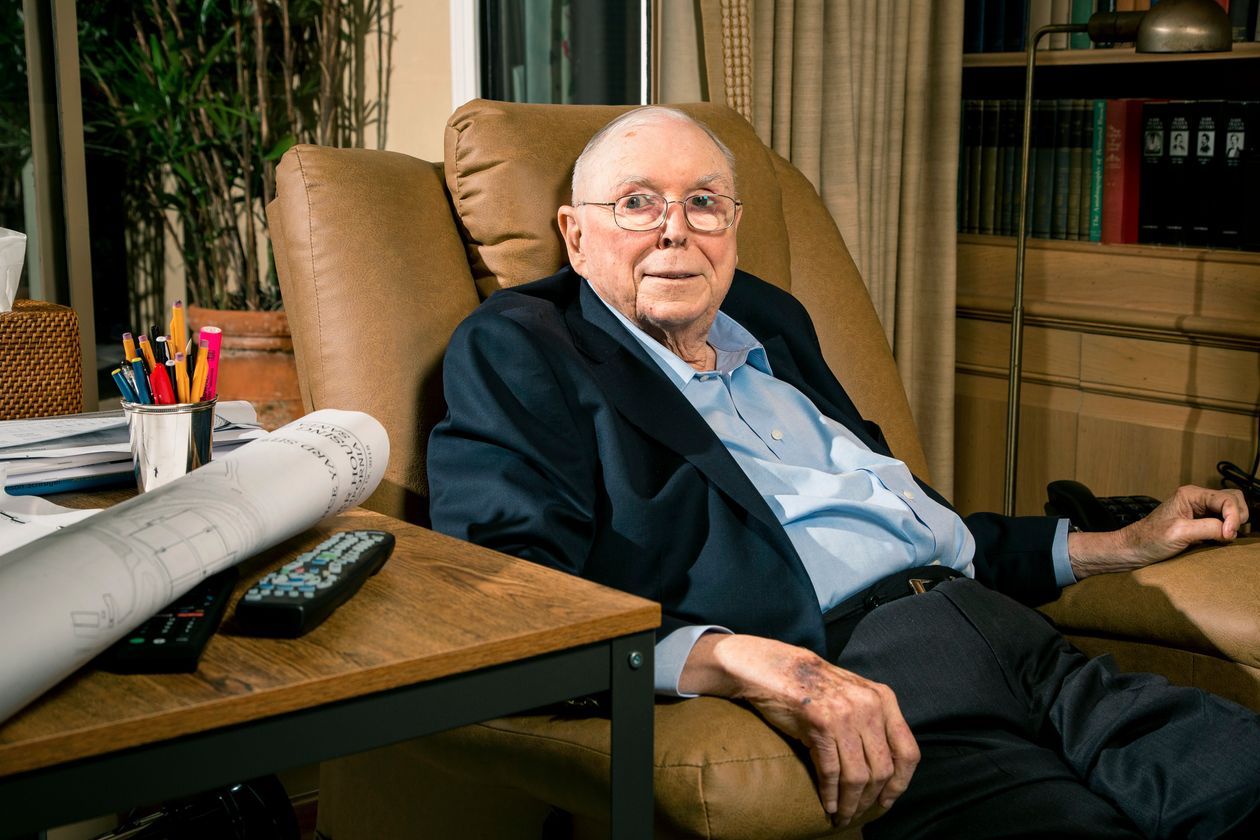 Photo: Michael Lewis for The Wall Street Journal
.
That hasn’t stopped him from spending up to several hours a day working on architectural drawings. Neither has being blind in one eye for roughly four decades and having failing vision in the other. Current and former school officials recall him frequently sending them hand-drawn designs and calling with new ideas.
"He doesn’t want to do it if he doesn’t understand it," says Mr. Buffett, who has been Mr. Munger’s business partner for more than 50 years. Of his partner’s passion for design, Mr. Buffett says, "It’s hilarious to me, because I can’t tell you what the color of the carpet is in my bedroom."
In the dining room, looking onto a garden, Mr. Munger speaks almost nonstop over a dinner of Wagyu steak with rice and asparagus, lemon cake and assorted chocolates from See’s Candies, a company Berkshire owns. Mr. Munger stands and walks with difficulty, but as soon as he is seated he talks in long, elaborate sentences. He doesn’t stop talking until a few minutes before midnight.
When Mr. Munger designs buildings, he dislikes curves, wasted space, shared bedrooms and bad acoustics. He likes using precast concrete and putting hallways and staircases on the outside of buildings.
His approach to architecture echoes his roughly six-decade-long career as an investor: He revels in his ornery defiance of conventional wisdom.
"You can’t solve your problem, if you want correct thinking, by just hiring bright people," he says, "because they do many dumb things." 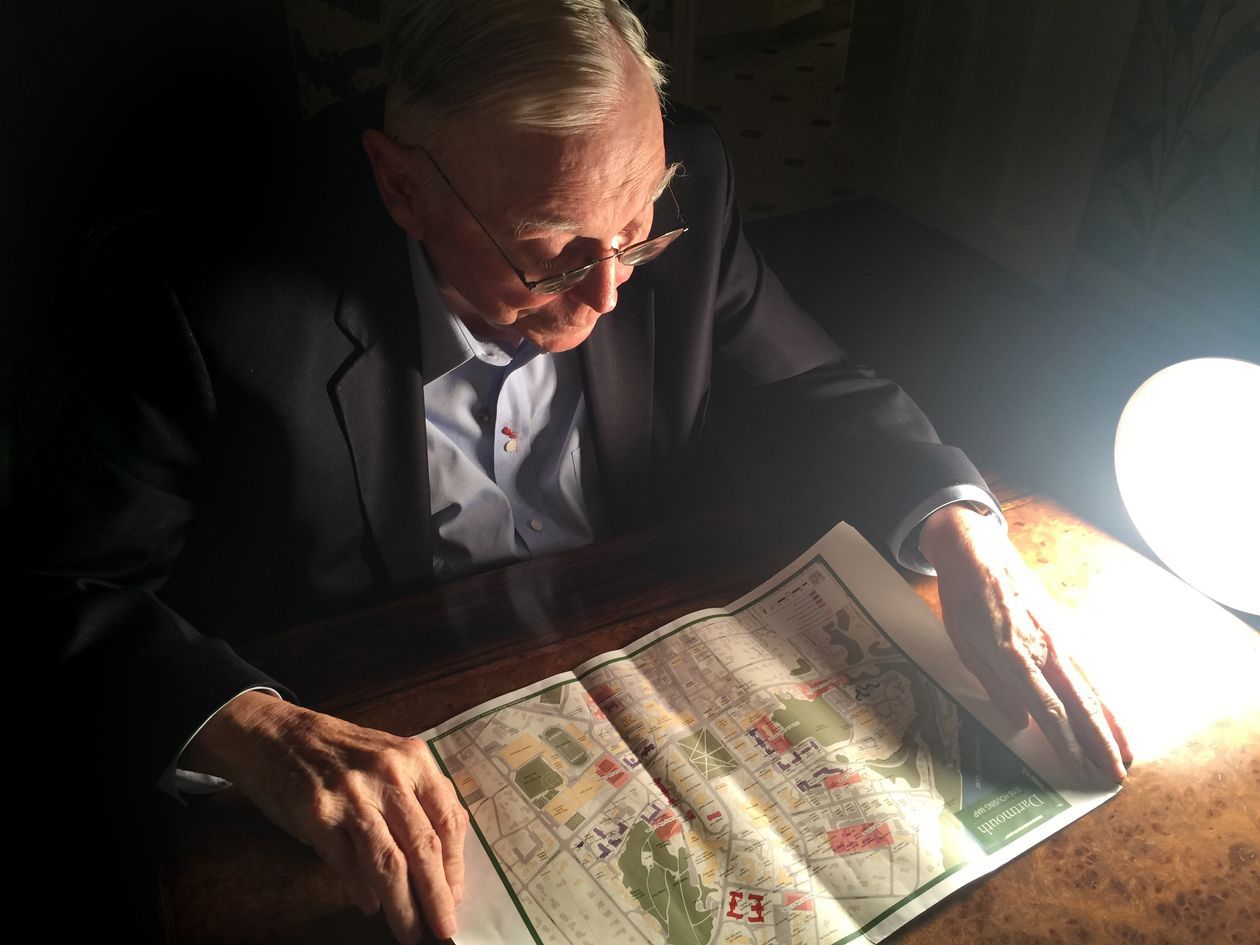 Photo: Peter Kaufman
.
Although Mr. Munger never formally studied architecture, he has experience developing real estate in Southern California. He built a community of luxury beachfront properties called Sea Meadow in Montecito, Calif., in the 1980s and ’90s, which his friends call Mungerville.
He says he wants to use architecture at schools to coax students into common spaces where they can mingle and collaborate: "The students will educate themselves and one another much better if we do the housing right."
An early plan for a graduate dormitory at the University of Michigan—built with a $110 million donation from Mr. Munger in 2013 that also funded fellowships—had space for about 300 students. Mr. Munger’s final design fits more than 600. Most of the bedrooms lack windows.
"He’s interested in the nuts and bolts. He’s not as interested in aesthetic design," says Mary Sue Coleman, former president of the university and current president of the Association of American Universities. "He likes to solve puzzles."
Mr. Munger also likes anticipating how a building could be used differently in decades to come.
"He can see into the future," says Jim De Matté, chief of campus operations and construction at Harvard-Westlake School in Los Angeles, where Mr. Munger has designed several buildings. "I don’t know how he does it." 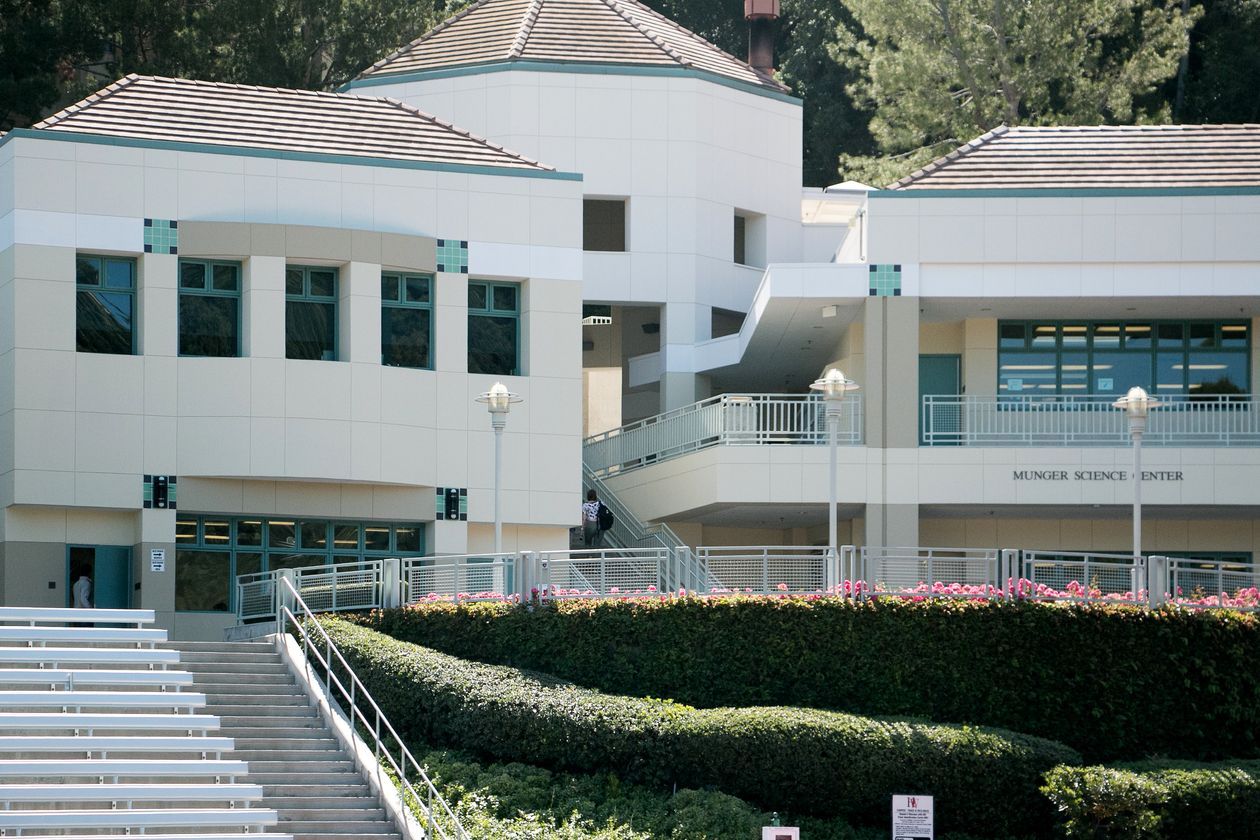 Photo: Harvard-Westlake School
.
Mr. Munger designed Harvard-Westlake’s middle-school library, which opened in 2008, with several computer rooms, but insisted on making the walls removable. When students later switched en masse to laptops, the computer rooms were easily converted for other uses.

How many conditions are too many for a multimillion-dollar donation? Join the conversation below.
.
In most cases, Mr. Munger chooses schools that he or his family members attended. (He studied mathematics at Michigan and meteorology at the California Institute of Technology, and earned a law degree from Harvard.)
When Mr. Munger imposes his design vision, even bathrooms don’t escape his attention.
"Any time you go to a football game or a function there’s a huge line outside the women’s bathroom. Who doesn’t know that they pee in a different way than the men?" Mr. Munger says. "What kind of idiot would make the men’s bathroom and the women’s bathroom the same size? The answer is, a normal architect!" 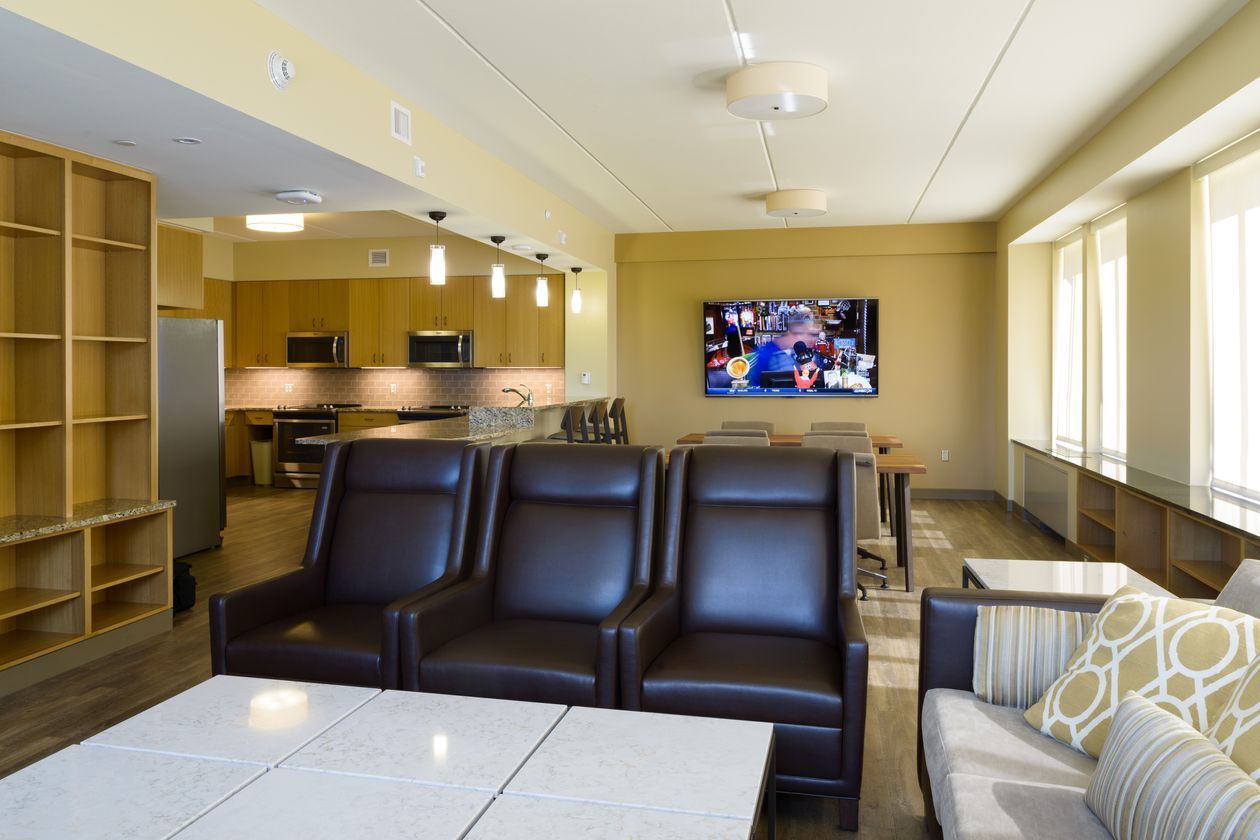 Photo: University of Michigan
.
At Harvard-Westlake in the 1990s, a preliminary design for the high-school science center he was funding called for the girls’ and boys’ bathrooms to be the same size. He turned to the architect and said, "We’re teaching biology in this same building?"
The plans promptly changed, and the girls’ bathrooms were built larger than the boys’.
Mr. Munger’s demands and attention to detail don’t always go over well. "Not every representative of a nonprofit is expert in dealing with the eccentricities of Charlie, who’s so deeply involved in every step of the process and often late into the process," says his friend Peter Kaufman, chief executive of Glenair Inc., an aerospace-parts manufacturer in Glendale, Calif.
After committing an initial $200 million to improving undergraduate housing at the University of California, Santa Barbara, Mr. Munger has spent much of the past few years designing a dorm for the school.
Mr. Munger’s proposal includes suites of eight single bedrooms alongside large common spaces. Most bedrooms would have artificial windows patterned after the portholes on Disney cruise ships, with customized lighting to mimic daylight. 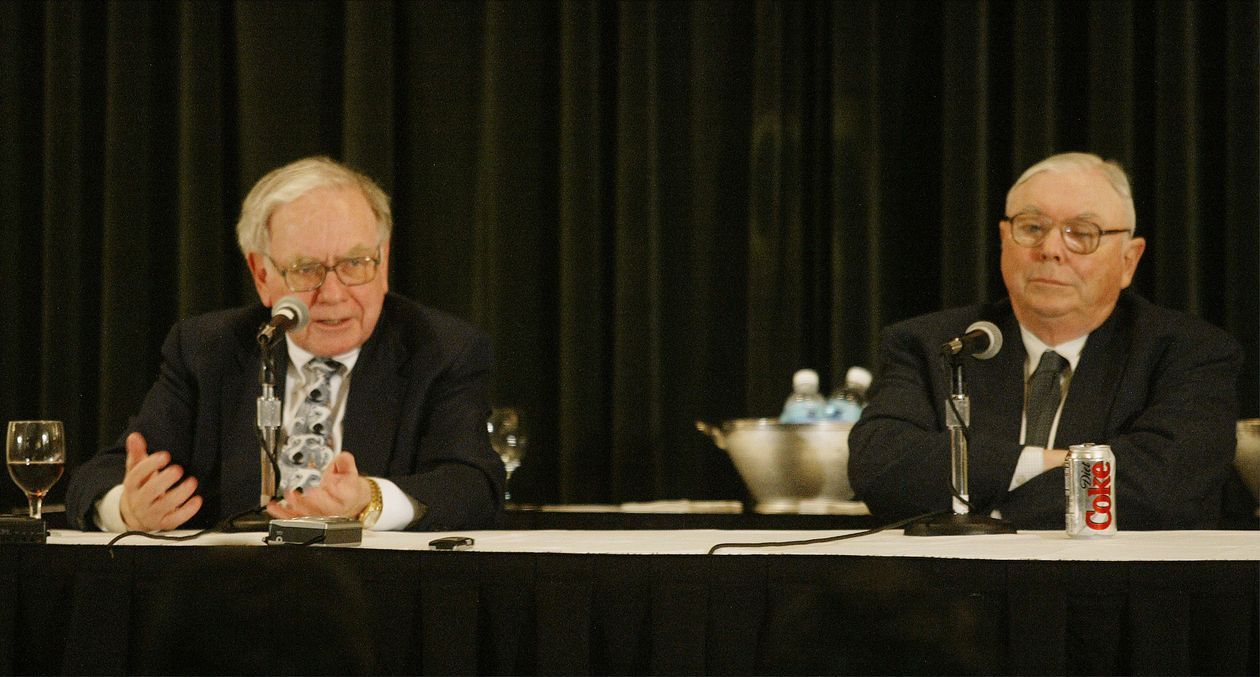 Photo: Eric Francis/Getty Images
.
The building still has to pass various approvals. Mr. Munger is confident that students would rather have single rooms than bedroom windows.
"The minute I saw that, I realized that was the correct solution. And everything I thought before is massively stupid," he says.
He predicts that when this dorm and his future housing projects at UC Santa Barbara are completed, "it will be widely regarded as the best in the world." He invokes Moses leading the Israelites out of Egypt: "It isn’t that the Jews didn’t get to the Promised Land, it’s just that Moses didn’t get to… That’s OK. This will all come to fruition after I’m dead."
He lets out a dry laugh: "Now, I’m not going to try to die early just so that’ll happen, but I’m OK with it if it does."
Write to Nicole Friedman at [email protected] and Jason Zweig at [email protected]

The conversation on this article is currently closed. WSJ limits the number of articles that are open to reader responses. For more information, please reference our community guidelines.

chat_bubbleperson
How many conditions are too many for a multimillion-dollar donation?

Excellent article. Mr Munger has exactly the right approach.In my day job, I manage a portfolio of Capital Projects, there's a design and construction element to almost all of them. Without fail, the best improvements have been brought to the table by the people with the least exposure to a formal design process. They can see things in a way which escapes people who do this day in and day out.Our best architects embrace this sort of collaboration. Our worst architects come to the table with an attitude of "here's my design and you'll just love it"

Munger's shrewd designs may open new ideas for architects, but some of his ideas ignore the wisdom that's layered within generations of accumulated college & student experience. Ignore the condition that dorm rooms can't have windows, and that they're mostly singles. Windows expand people's thinking and improve people's moods. Singles are fine for some, but most people learn how to deal with others and acknowledge similarities and differences through having their freshman year room mate; as unpleasant as the experience is for some, it's well worth it for many.

Some people thrive in collaborative spaces, some don't. Some people like natural light and fresh air some don't.Me, I can't imagine living in a dorm room without a window--or worse with a fake window. Different strokes for different folks.He's right about architects though.

Mr. Munger made a large donation to the Law School at Univ of Michigan for a refurbishing of the dorm - the historic "Lawyers Club" on the Law Quad, all of which was originally designed to copy Cambridge.I'm an alum and haven't seen the changes except in a Google Street View photo. I assume they're good, but half of the outer entrances are gone and so my old entrance ain't there any more. No revisiting THAT past.Maybe just as well!

How do they get bedrooms with no windows past code enforcement?