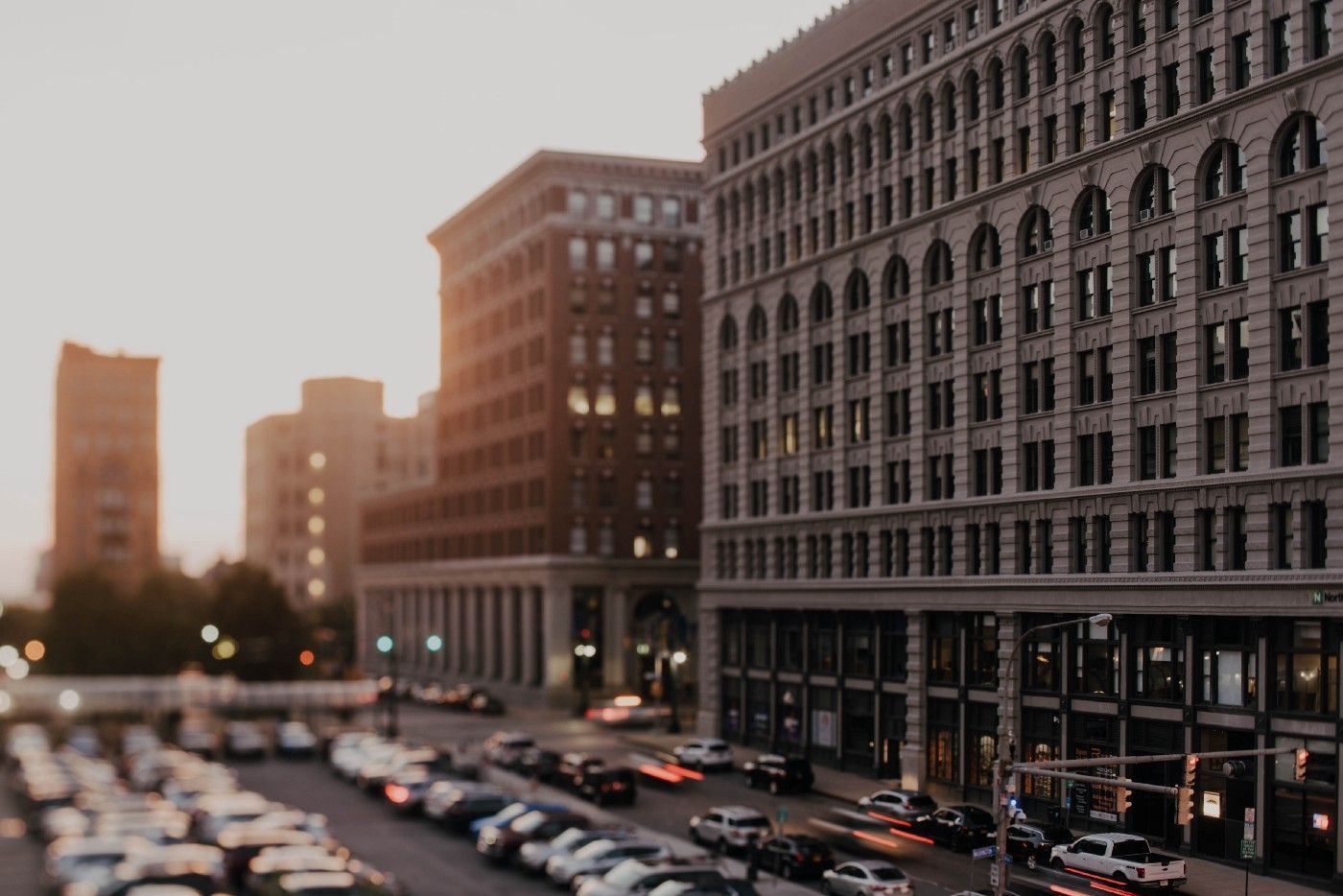 Buffalo ended parking requirements. What did developers do next?

A sweeping zoning reform gave rise to mixed-use, transit-oriented projects with far less parking than they would have had before. But single-use developers showed few signs of change.

One of the most promising trends in urban planning is the push from a growing number of U.S. cities to reduce minimum parking requirements for new developments. As the name suggests, parking minimums require developers to build a certain amount of spaces, regardless of whether a community wants or needs them. The result is an excess of parking that can lead to more vehicle pollution, worsen traffic congestion, and drive up housing costs. In some cases, the steep cost of building parking prevents a project from moving forward at all.

In theory, ending parking requirements should provide developers with the flexibility to meet transportation needs in more innovative and sustainable ways. For example, development projects in dense, walkable, transit-friendly areas should be able to repurpose would-be parking space into shops, homes, parks, or other community uses that rank above vehicle storage. But the shift away from parking requirements is relatively new, so there’s not much evidence about what developers actually do in response.

A new study of Buffalo, which cut parking requirements citywide in 2017, shows that many developers will indeed build less parking if given the chance. The work, set for publication in the Journal of the American Planning Association, finds that mixed-use developers, in particular, "readily took advantage of the newfound possibility to include less off-street parking." The 14 mixed-use projects tracked by the study provided 53 percent less parking than previously required — with four projects building no parking at all.

"Cities of all types stand to benefit from undoing constraining parking policies of the past and allowing developers to transform parking lots into ‘higher uses,’ " write study authors Daniel Baldwin Hess and Jeffrey Rehler, urban planning scholars at SUNY-Buffalo. "Conversion of excess off-street parking spaces to such ‘higher uses’ benefits not only municipalities such as Buffalo looking to introduce a denser (and more walkable) urban form but also highly urbanized areas where developable land is limited."

But the full story isn’t quite so straightforward. Many single-use developers actually built more parking after the reform took hold. Let’s dive a bit deeper.

Like many U.S. cities, Buffalo introduced parking requirements in the 1950s, largely to boost economic activity by making it easier to drive into town. In 2017, Buffalo removed this rule as part of a sweeping zoning reform known locally as the Green Code. In addition to removing the old parking requirements, the new code encouraged developers to rely on more sustainable mobility approaches.

Buffalo’s change presented a timely chance to study what developers do once parking requirements disappear. There’s some existing evidence from parts of very dense cities like New York that removing parking minimums can lead developers to build less parking. Buffalo’s reform created a wider window into what happens when parking changes cut across a whole city — and a midsized, fairly car-reliant city at that.

For the research, Hess and Rehler reviewed public data on parking plans for 36 developments approved in Buffalo within the first two years after the reform went into effect. All told, the 36 developments built 502 fewer parking spaces than they would have needed to under the old rules, a 21 percent decline. The 14 mixed-use projects (mostly residential plus retail) led the charge, providing 813 fewer spaces (the aforementioned 53 percent decrease) than the previous code required.

Some key insights from the mixed-use development response:

Simply put, by removing parking requirements, Buffalo unlocked the creation of more than 1,000 new homes and a vibrant array of transit-accessible businesses and restaurants — many of which might never have existed given the high cost of creating new parking.

But the story doesn’t end there. Of the 36 developments tracked by Hess and Rehler, 19 projects actually built the same or more parking than would have been required under the previous zoning rules, to the tune of 311 total additional spaces. These projects consisted mostly of single-use residential or commercial developments outside the downtown core, along with a few civic projects:

As the table above shows, the dramatic parking reductions from mixed-use developments still resulted in a net reduction in spaces for Buffalo. But the fact that single-use developers didn’t change their parking approach in the face of sweeping reforms might disappoint some urbanists. Are driving norms so deeply entrenched that even an unprecedented, generational policy shift can’t move the needle in the direction of more sustainable mobility?

One response to that question is simply that the zoning reform worked just as intended. Buffalo didn’t impose parking restrictions — it merely removed parking requirements. The whole point was to enable developers to meet local mobility demands. In that sense, parking stayed where it was needed (car-reliant housing complexes far from transit) and left where it wasn’t (mixed-use developments in the city center). As one Buffalo city planner told the researchers: "The sky is not falling." While that assessment might sound bleak to some ears, it also might prove compelling to other midsize U.S. cities pushing for similar reforms but facing strong opposition to change.

Another takeaway is that some developers likely need more time to change their ways, or more tools to help them. Development is a slow and traditionally risk-averse industry; it’s quite possible that many single-use developers in Buffalo are waiting to see that an innovative approach to parking can work before adopting it themselves, especially for residential projects in car-reliant areas. Shared parking is a great example: the technologies to create these flexible networks are just starting to emerge. Once residents get more comfortable using such networks, more projects are likely to adopt them.

A final takeaway is that parking reform may be a key step toward a more sustainable transportation system, but it’s still just one step. If cities don’t have the transit corridors in place to provide driving alternatives, then developers may have a harder time responding to parking reforms by creating fewer spaces. Other essential foundations include zoning codes that permit mixed-use development, a commitment to safe bike lanes and accessible sidewalks, and support for the small businesses that remove the need to drive at all. On these core services, local government must lead the way.

A future with far less parking is certainly one Hess and Rehler would like to see for Buffalo — and similar cities. They conclude:

In the absence of [minimum parking requirements], off-street parking lots can transform into parks, shops, workplaces, and residences. Conversion of excess off-street parking spaces to such "higher uses" benefits not only municipalities such as Buffalo looking to introduce a denser (and more walkable) urban form but also highly urbanized areas where developable land is limited.

The path to that future starts with cities reexamining old rules in the context of new goals — and continues with developers embracing innovative approaches to more sustainable communities.