A book that accidently explains the entire construction industry 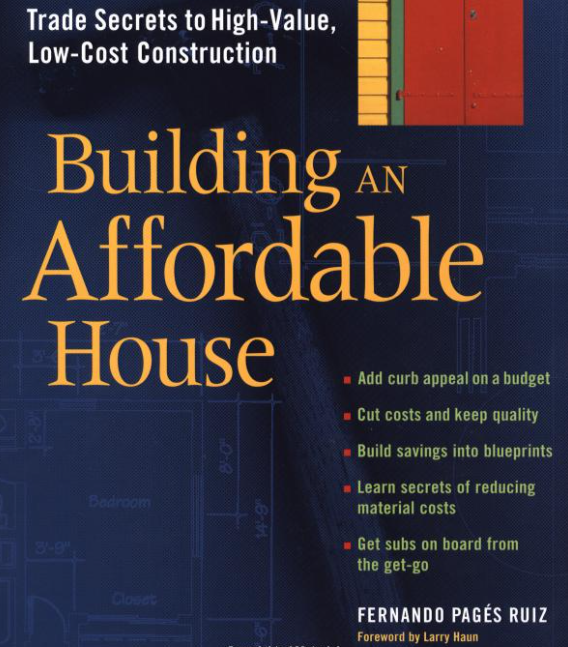 "Building an Affordable House" is a book written by Fernando Pages Ruiz, a builder of low-cost homes. Ruiz used his own experience, as well as advice from builders, architects, engineers, and trades to document the various ways the low-cost builder [1] can save money building a house. It goes through every portion of the house, from basic design, to the various trades, to the finishes, landscaping, etc. According to Ruiz, the techniques in the book allow him to build houses for 15-33% less than his competitors [1].

But Ruiz isn’t interested in building a low-quality house - he reserves his recommendations for things that don’t impact quality, and is clear on areas where spending the extra money is worth it. Ruiz is clear that (as we’ve seen previously), building costs aren’t the result of one or two things, but dozens of subsystems and thousands of individual components. Reducing cost is a game of item-by-item optimization and streamlining. The result is a fairly thorough documentation of not just money-saving techniques, but the various inefficiencies throughout the construction process.

The techniques mostly fall into a few basic buckets: finding low points on cost-curves, navigating code requirements, cutting superfluous features or finishes, and keeping up with advancements in building technology.

Much of the advice of the book is a sort of basic linear optimization - identifying an expensive material or process, figuring out the relationship between the design of your building and how much of the expensive thing is being used, and finding a way to minimize it.

For instance, the exterior wall assembly, roof, and foundations are some of the most expensive assemblies in a house, so the basic shape of your house should be one that minimizes their extents (ie: minimizes the surface area to volume ratio). This means that a two-story house is generally cheaper than a one-story of the same square footage (less roof and foundation), and a box-shaped house will be cheaper than a rectangular shaped house. Ruiz has plenty of other examples:

Like any linear optimization problem, these cost functions are subject to various constraints and interactions that add complexity. For instance, if your box-shaped home exceeds 32 feet on a side, you’re past the point where you can use off-the-shelf framing materials for the floor and roof, which immediately makes your framing more expensive.

These sorts of inflection points and cost cliffs are everywhere in construction, and a substantial portion of the book's advice is on how to avoid running into them. A few others:

Often this minimization means finding the balance between decreased costs in one area and increased costs elsewhere. Some items, like stainless steel gas tubing, flexible AC ducts, or recessed lighting, trade increased material costs for decreased labor cost. Increasing the amount of insulation in the walls allows a smaller HVAC unit to be used.

These cost functions often involve intersection between two separate trades, and so won’t get caught by a typical design process. If the framer can include a chaise for electrical to run, the cost to install wiring is dramatically reduced - but the electrician and the framer need to coordinate early on in the project.

Much of the book is finding ways around building code provisions that add cost. Sometimes this is simply putting in the effort to go beyond the code prescriptions. For instance, the building code generally assumes 2000 psf soil bearing capacity or less, but a soils test will often demonstrate much higher capacity, which allows a smaller foundation to be used.

Other times this means deliberately lobbying the local code authority or building inspector. Over and over again, Ruiz says something to the effect of "the major code authorities approve of this approach, but your local municipality may not" or "X isn’t actually needed, but many jurisdictions require it anyway". Some examples:

Sometimes this means deliberately sizing things to avoid triggering an onerous code provision. Countertops, for instance, require an outlet once they’re 12 inches in length, so keeping short runs of counter just below this avoids this cost.

Building technology isn’t something that’s typically thought to change very quickly. But precisely because of that, builders often don’t pay attention when the technology does change.

Sometimes these are products that had poor performance when first introduced, which later versions ironed out. Things like PEX piping instead of copper, or Hardiboard cement siding, had several high profile failures which still dog them, even though their current performance is vastly improved.

Since this book was written in 2005, many of these technologies have since become standard (PEX), but some are still relatively uncommon.

As we discussed previously, much of the expense of a home results from high-end finishes and aesthetic choices that have little (or negative!) impact on function. Some of the book’s recommendations are for ways to emulate those, such as cheaper substitutes for expensive materials like brick, tile, and stone. But often he’s simply biting the bullet, and using lower end finishes, such as with laminate countertops, melamine cabinets, or vinyl siding. And he recommends eliminating pricey but non-functional trim around doors, windows, and wall edges (no crown molding, no baseboards! Hide the drywall gap with carpet!). 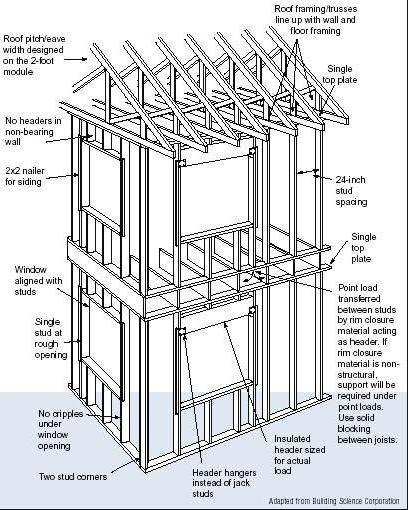 Advanced framing is something Ruiz recommends, and it makes an interesting case study as a cost-reduction technique. Advanced framing (also called "Optimum Value Engineering") is a method for eliminating a lot of the extra lumber that typical framing uses:

And yet contractors are almost completely unwilling to pick it! I’ve personally been in multiple discussions with builders with the direct goal of lowering a building’s cost, and they’ve all balked at the prospect of using advanced framing.

The problem is one of tolerance. Advanced framing can save quite a bit of lumber, but removing the extra lumber also removes the slack in the system - the margin of error is greatly reduced as well. Unlike typical framing, which can easily accommodate incorrect stud or truss placement, advanced framing cannot. This raises the amount of coordination required, and makes repairs both more likely and more costly to fix.

Of course, construction workers locate building elements extremely precisely all the time. But general contractors are not performing the framing themselves. They’re subcontracting that out, and they basically assume that the level of tolerance required is infeasible to achieve by the subcontractors they hire. Thus, advanced framing remains extremely niche - it seems to be entirely used by high performance green builders as part of a strategy for maximizing how much insulation you can place in a wall, and minimizing thermal breaks.

In order to implement all these cost saving methods, Ruiz had to adjust his construction process. Ruiz describes gathering the subcontractors that would install the various systems (framing, HVAC, electric, plumbing, etc.), going over a preliminary set of blueprints, and working out how things could be done cheaper. By starting from a nearly empty canvas, the trades can coordinate their various requirements, and rearrange elements of the building until they find something that works. The cost optimization process doesn’t work if it’s started late in the design process - by then, it’s too far along to make substantial changes, and potential gains are minimal.

Ruiz also stresses the need to do this process continuously - if you notice something inefficient on the jobsite, find a way to do it better, and change the plans for the next job.

Building this way requires a way of operating that’s extremely rare in the construction industry. Much more common is the design to proceed from architects to design team, to contractor, to subs. At each stage, the ability to make changes narrows. Engineers and subs are typically working on tight deadlines and fixed fees. Their incentive is to maximize profit and minimize risk, which means minimizing the amount of design changes, and do things in the way they’re sure works.

Often this cashes out to "bid the project a per-square foot basis", which doesn’t take into account highly optimized floorplans. Ruiz talks about the importance of working closely with his subcontractors, sometimes getting them to change their pricing methods, to actually realize the savings.

Ideally, the techniques in the book would be part and parcel of the normal construction process. As it stands, the changes to the process they require, and the sacrifice in flexibility, make them hard to implement. Just dropping them into a typical new home build wouldn’t do much.

[1] - Ruiz defines "affordable" as a home that can be purchased by someone earning 80% of the median income without exceeding 30% of their income.

[2] - In an interview, Ruiz says his cost of construction is about $95 per square foot, compared to $150 for his competitors. NAHB describes the "average" new home construction cost as $114 per square foot - presumably Ruiz would be building even cheaper in a lower cost area, though by how much it’s hard to say.