Architects: Find the perfect materials for your next project through Architizer. Manufacturers: Sign up now to learn how you can get seen by the world’s top architecture firms.

"Hanok" is the term used to describe traditional Korean houses. The architecture of these houses focuses on the infrastructure’s relationship to its surroundings — typically landscapes and seasonality. Many villages in Korea show mixed suburban and urban landscapes of both traditional Hanok homes and modern homes that take into consideration the characters of traditional architecture in a unique way. Modern Hanok architecture is inspired by both the natural principal of house positioning to showcase and frame beautiful landscapes, while also remaining true to materiality and interior characteristics.

Since Korea experiences extremely hot summers and cold winters, these Korean homes have a floor-based heating system for winters but are made of wooden flooring to cool off during hot summers. Common materials used in this type of architecture are soil, timber, rock, and curvy tiled roofing. These materials are often raw with minimal finishing as to blend in seamlessly with the natural environment. Interior plans make use of sliding doors made of "hanji," a traditional Korean paper that creates a beautiful and breathable look.

While many Hanok homes can be seen in small towns of larger cities, most neo-traditional Korean homes are built in remote areas, truly capturing the traditional essence of Korean homes by embracing the surrounding nature in creative ways. 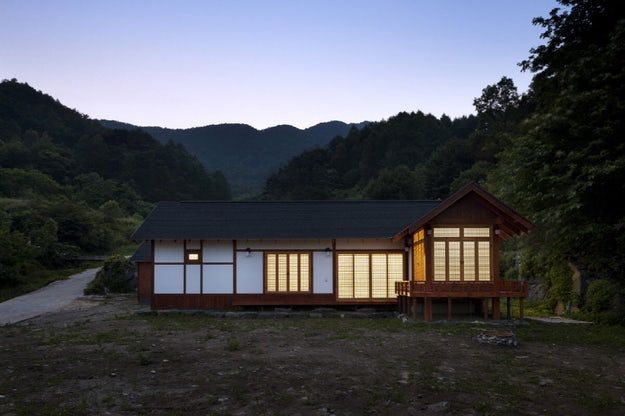 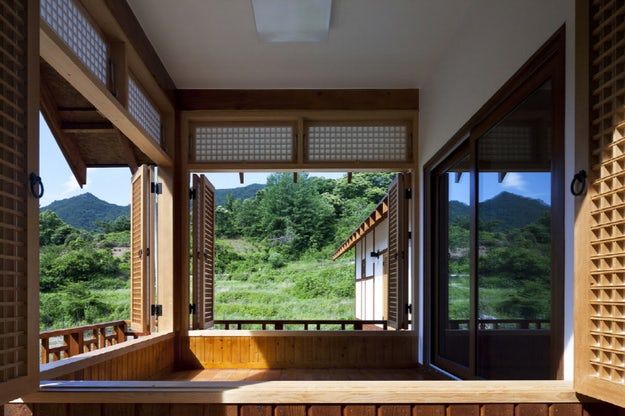 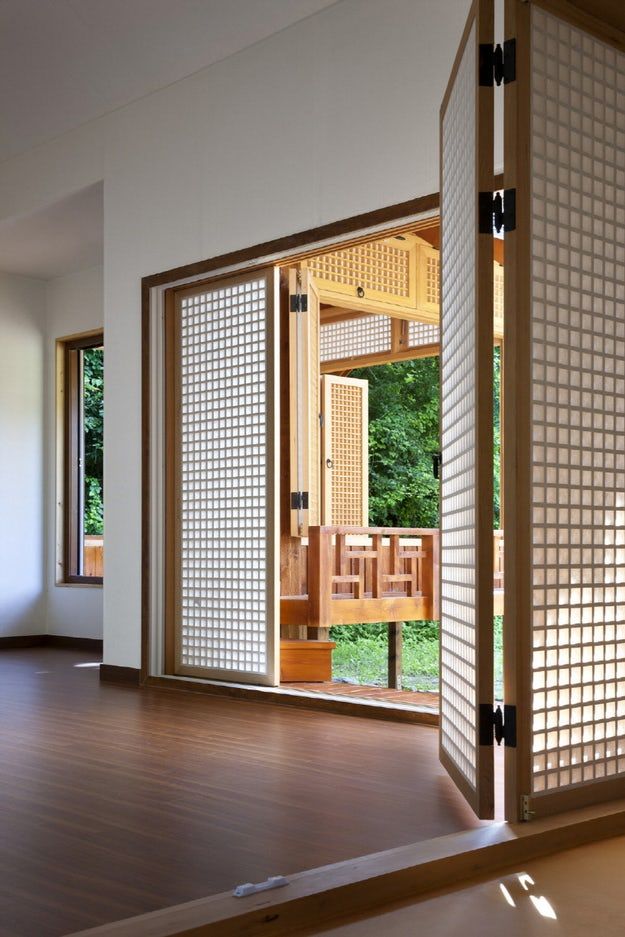 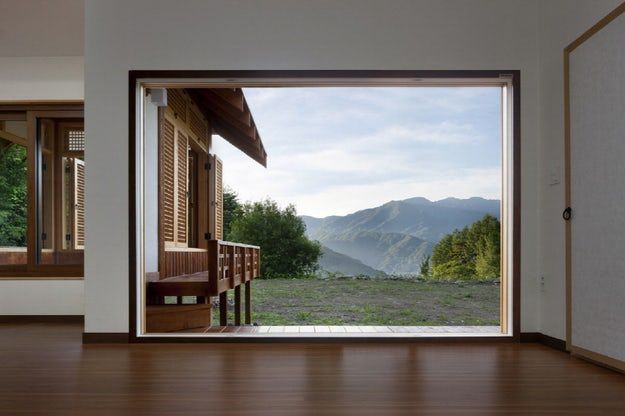 From site location to orientation, the architects deliberately planned this project based on the view of the mountains and feng shui. Whether you’re on the porch or inside in the living space, each large window or sliding door frames a beautiful view of the surrounding nature. 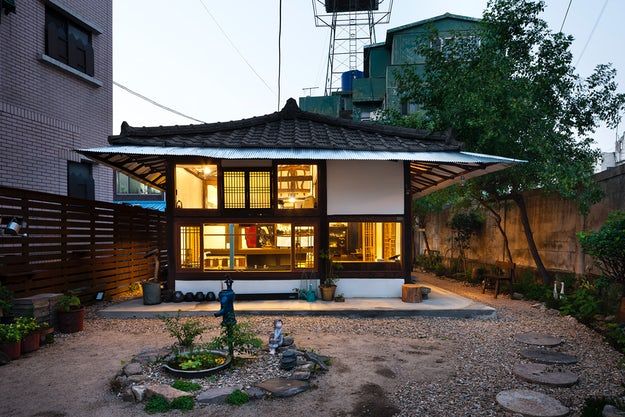 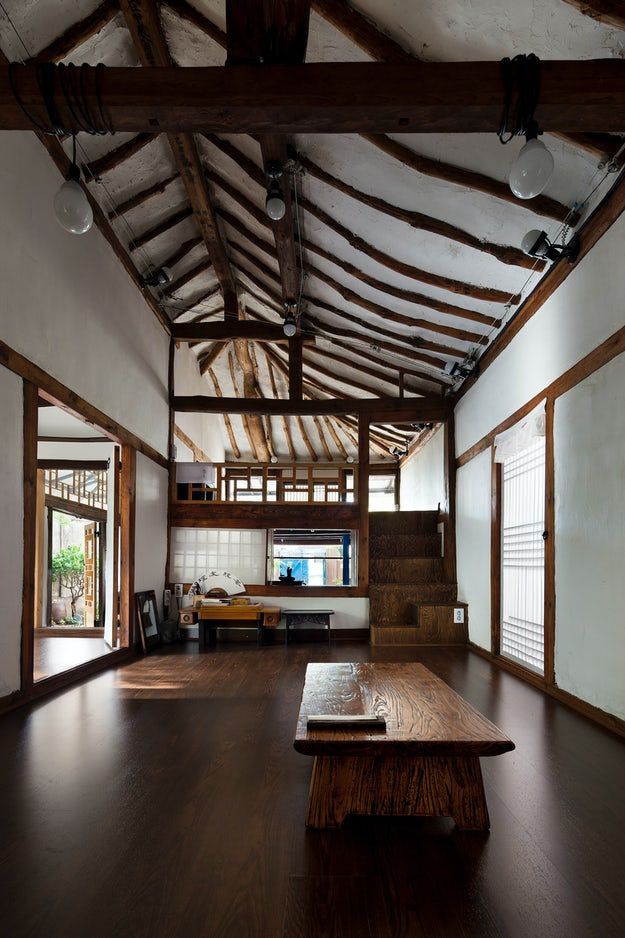 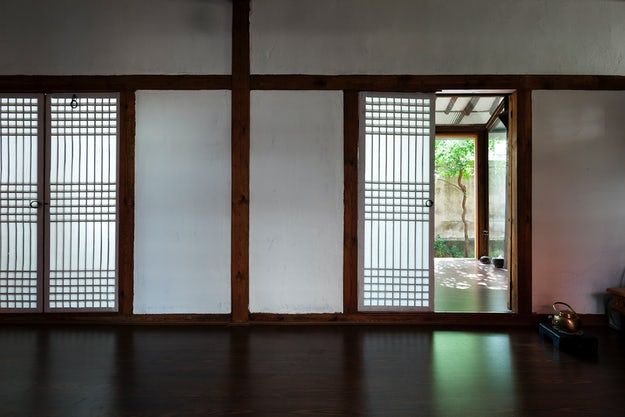 A true marriage of old and new, much of this project was built using salvaged wooden beams from the existing infrastructure due to the personal relationship that the client had to the old house. The windows and doors are made of both hanji and glass, with a mixed look that feels both familiar yet modern. 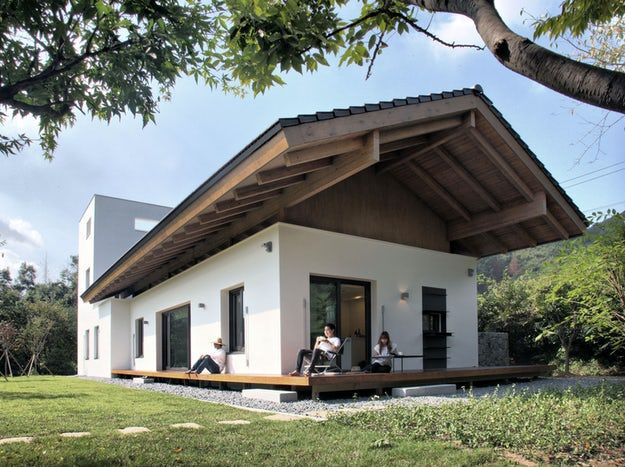 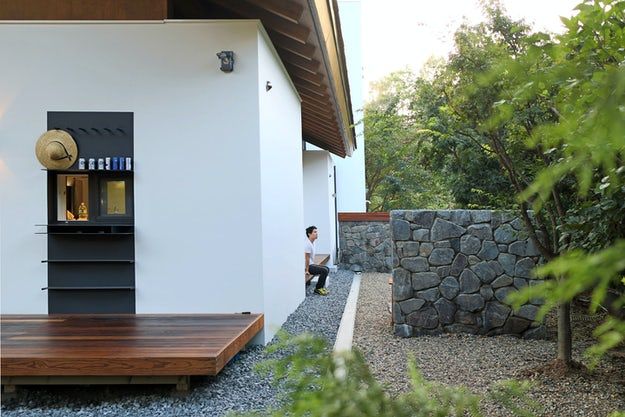 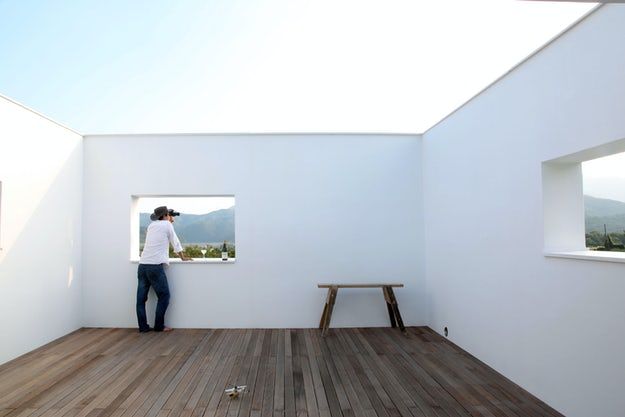 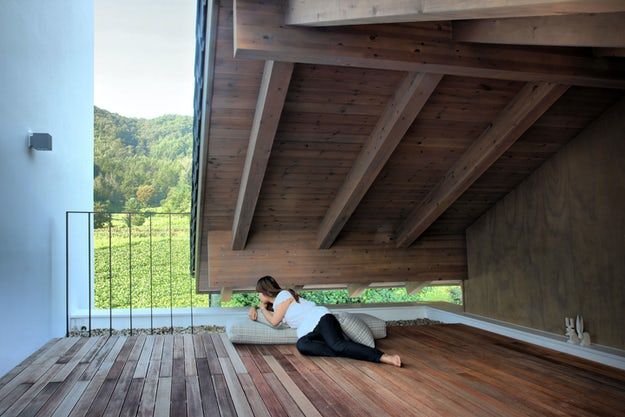 The wood gable roof clad with dark-gray roof tiles resonate with Hanok architecture. A deck on the ground floor as well as on the upper floor right below the roof provides a cool space to relax in the hot summers. The smaller windows in the observatory frame the mountains in the distance. 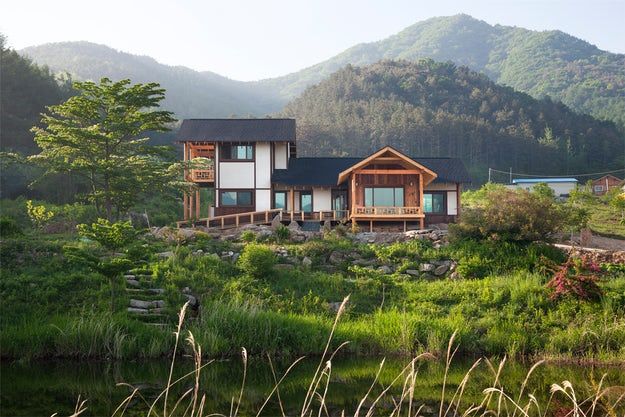 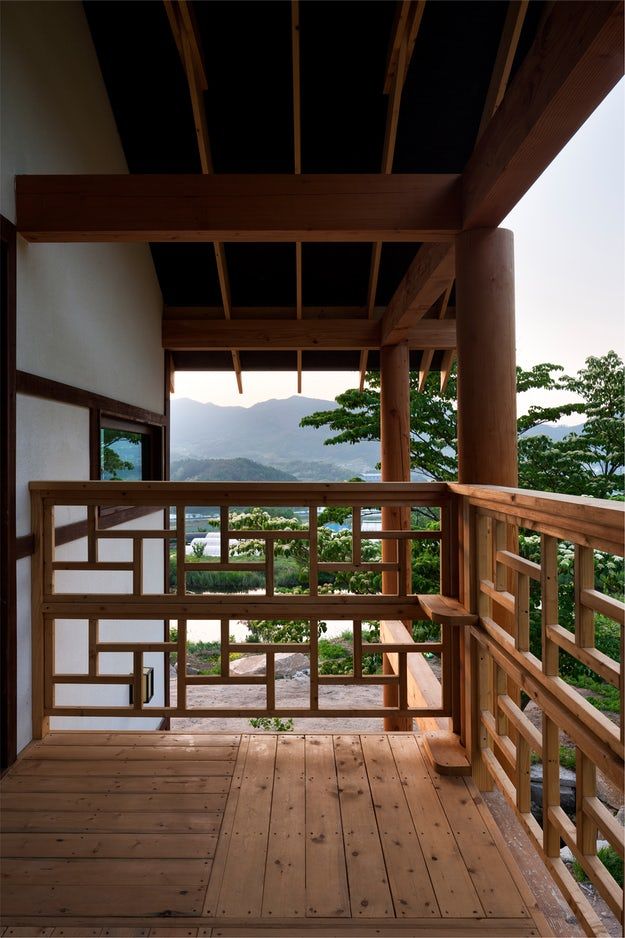 This modest and cozy house nestled at the foot of the hills has a simple plan for a three-generation family. The large wood gable porch is elevated up to the second floor creating a picturesque view of the mountains. 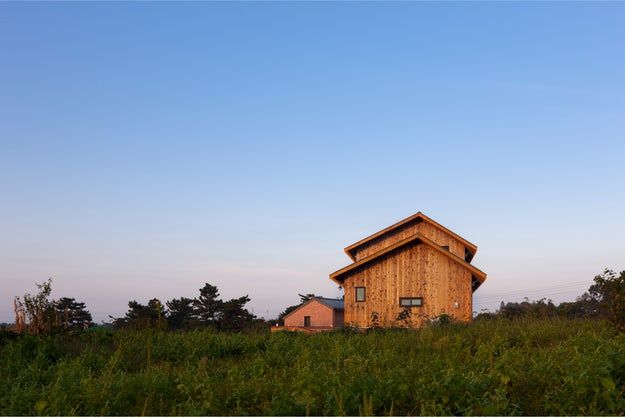 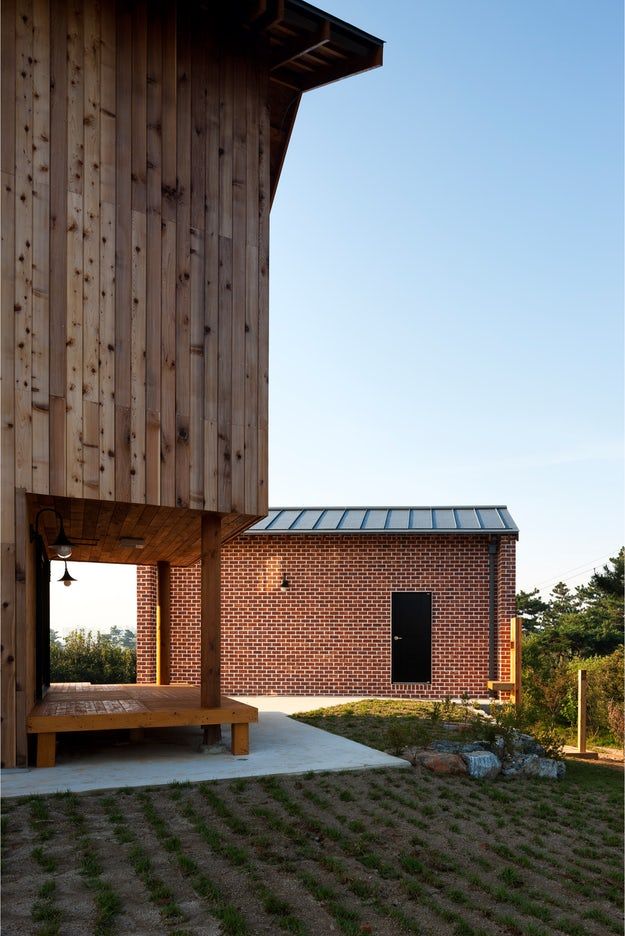 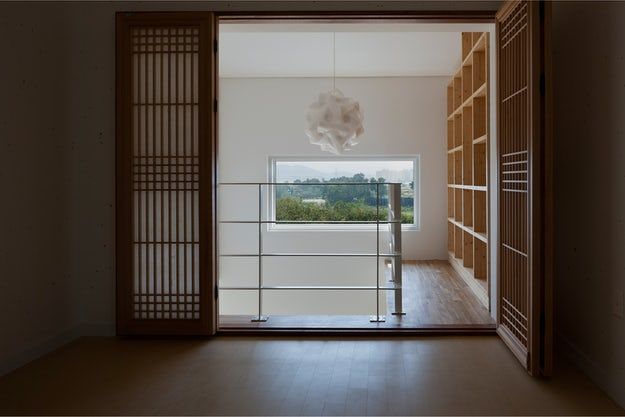 The wood gable and the dark-gray colored roof emanates traditional Korean architecture but with modern materials. Inside the home, the use of mixed materials such as hanji, timber, concrete, and aluminum creates a modern but homey look and a clean airy space. 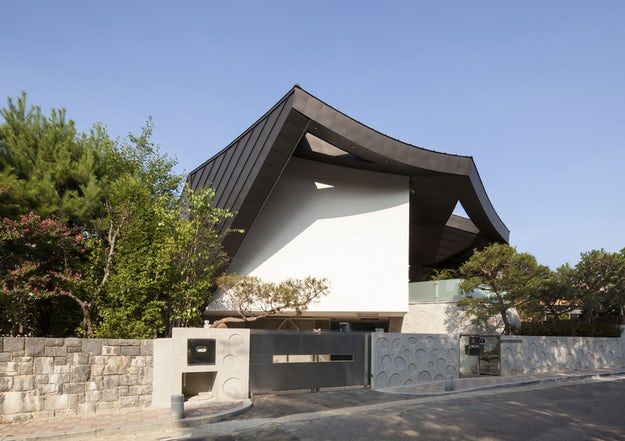 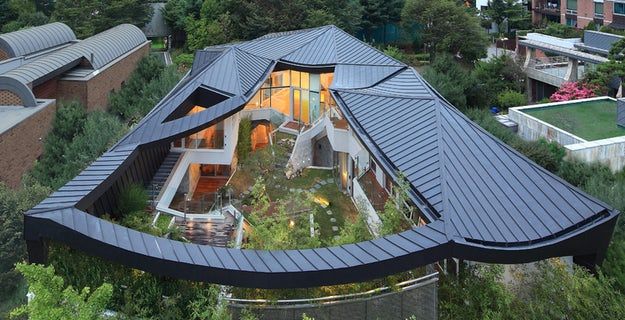 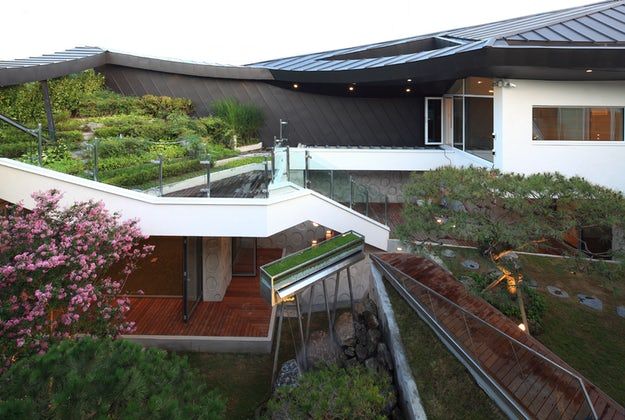 A truly modern take on Hanok architecture, this project took the traditional Korean roof and abstracted it into a more dynamic element. It also uses traditional Korean residential courtyards by bringing the nature inside rather than framing what exists outside the walls.