We’ve mentioned previously how industrialized building and prefabrication struggles with transportation and logistics costs. We see this basic limitation again and again - building components are large enough that it’s not cost effective to ship them more than a few hundred miles.

But despite this, successful prefab construction companies often ship their modules 500 miles or more. Let’s take a look at a couple of them, Autovol and Stack Modular, to see how they make it work.

Autovol is a modular construction company based in Boise, Idaho [0]. They use a light framed wood volumetric modular system, building large (1000+ ft2) modules to a high level of completion. Finishes, appliances etc. are all installed in the factory prior to shipment. This puts Autovol at the upper right of the component size/level of completion space.

Autovol targets the multifamily construction market. They’re very upfront that their goal is to build affordable housing [1]. Their 400,000 square foot factory is capable of building 2000 modules a year, 8 a day. Right now they’re building about 2 a day, and employ about 115 people, though they’re actively hiring.

Autovol is interesting for a few reasons. The most visible one is the level of automation in their factory. Watching the video of the factory in operation feels like another "looking at the future of construction" moment:

Rather than manual assembly, wall, floor, and roof panel construction is all automated. A series of robotic arms lays out the studs, the headers, attaches the sheathing and drywall, and cuts out the openings. It’s very impressive to watch.

Autovol isn’t unique in this level of automation. Highly automated wall panel fabrication isn’t uncommon in Europe [2], and companies like Weinmann and Randek install these sorts of systems all over the world. But it does set them apart in the US market.

Automation is mostly limited to building the structural frame and attaching the drywall. Things like cabinets, electrical, drywall finishing, windows, etc. are still installed by hand. This leaves about 80% or so of the work to be done manually (though it wouldn’t surprise me if there was automation or other optimizations in things like material handling). Autovol seems interested in increasing the level of automation over time.

The other interesting thing about Autovol is where their projects are. Despite being located in Idaho, they don’t build projects there. Instead, they ship their modules hundreds of miles south California, to places like San Jose (650 miles away) or Santa Maria (850 miles away).

Stack Modular is a Canadian modular construction company, based in Vancouver. They use a steel framed volumetric modular system, with modules a similar size to Autovols (900+ square feet). Stack’s has an even higher level of completion than Autovol. In addition to appliances, they’ll often come shipped from the factory fully furnished. 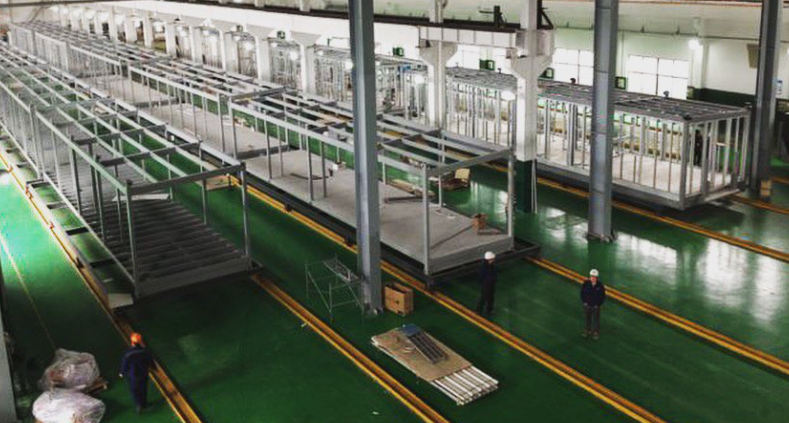 What sets Stack apart is where their production facilities are. Though they mostly seem to build projects on the west coast (SF, Vancouver, etc.), their production facilities (as well as most of their employees) are located in China. Stack’s modules are produced in one of their 3 factories in the Shanghai region, transported to North America via ship (Stack doesn’t build for the Chinese market), then trucked to the project site. I’m not aware of any other company shipping modules such a long distance.

Unlike Autovol, Stack’s modules are mostly built manually. Their factories seem to be of the "big warehouse" flavor, without any sort of assembly line process or automated equipment. Stack employs up to 500 people in their manufacturing facilities, though it’s unclear how many modules they’re producing a year [4]. Because Stack’s modules exceed the size of a shipping container, they’re transported using break bulk ships designed for non-containerized cargo [3]. The trip takes about 18 days.

Like Autovol, Stack is targeting the multifamily construction market, as well as hotels and workforce housing [5]. They’ve apparently done hotel projects for Hyatts and Citizen M, and they describe doing a lot of government funded work in Canada (which apparently offers specific incentives around modular housing construction). But unusually for the construction industry, they keep a very tight lid on project specifics. There’s almost no specific project information mentioned anywhere on their website or their social media.

Despite their differences, Autovol and Stack Modular are leveraging the same basic opportunity. They both build their modules in locations where labor is inexpensive, and ship them to places where labor is extremely expensive. Though the gap is shrinking, wages in China are a small fraction of US wages, and a framer in Idaho might make 1/3rd that of what they’ll make in the Bay area.

And this isn’t unique to these companies. This sort of labor arbitrage is a common business model in modular construction [6]. IndieDwell, also located near Boise, also builds multifamily buildings in southern California. VBC builds projects in Philadelphia, shipped from their factory in North Carolina.

And of course, the history of modern manufacturing is companies continuously moving production in pursuit of low-cost labor. Nike’s, originally made in Japan, are now made in Vietnam and other low-cost countries. Electronics manufacturing gradually shifted from the US, to Japan, to Taiwan, to China as wages in the respective countries rose.

If anything, it’s surprising that we don’t see this more, if only at the component level. But it seems to be uncommon. China manufactures metal buildings for shipment as far away as Africa, but Chinese steel has little presence in the US. Truss manufacturers aren’t shipping their products across the border from Mexico. Manufactured homes, despite being labor intensive to build and competing almost entirely on low price, are all locally built as well. It seems to be far more common for prefabricated component production to be located at the centroid of their addressable market, rather than at a source of low-cost labor [7].

But clearly there’s some opportunity here. Autovol claims it’s able to reduce the cost of construction by $100/ft2, an astonishing figure.

Presumably getting this to work requires a labor rate differential large enough to overcome the increased transportation costs, and there’s a limited number of places of exceptionally high cost construction that will work. Often these are places with significant building trade unionization [8].

Autovol’s modules are wide enough to require escort cars and be subject to strict drive-time limitations - I suspect transportation is adding 20% or more to their costs. But the Bay area has the highest cost of construction in the US, 2x those of lower-cost locations like Boise, making it a lot easier to make the numbers work.

For Stack, I don’t have a good sense of the costs of shipping break bulk. This likely limits them to areas relatively near a port to avoid tacking on significant additional trucking costs. I get the sense that many of their projects are in high cost of construction areas like SF or Vancouver.

The Future of Autovol and Stack

Of course, Autovol wouldn’t need a $100 million automated factory if it was a pure cheap labor play. They’ve stated that their goal is to deliver affordable housing, and they’re clearly interested in leveraging automation to do that.

One possible trajectory for them is that they’re using the labor arbitrage as a bootstrap. Starting with building in extremely high-cost areas, and gradually increasing their automation/lowering their costs, making it feasible to compete in increasingly low-cost areas. It’s possible to see the outline of a virtuous cycle - lowered costs lets them compete in lower cost areas, which both increases their production volume, and decreases their transportation distance, lowering their costs even more.

The future of Stack Modular is murkier. Wages in China are likely to go up, and the political environment surrounding manufacturing in China is likely to get worse. Given their apparently low-capital operations, it makes me wonder if they’ll follow in the footsteps of other manufacturers, and move their operations somewhere lower cost.

[0] - Boise is apparently a nexus of modular construction. Autovol, IndieDwell, Guerdon all have operations there.

[1] - In real estate, "affordable housing" often specifically means housing funded in part via Low Income Housing Tax Credits. It seems like this is what Autovol is specifically targeting.

[2] - At one point Autovol was engaging with a Swedish company to build their automated system, before going with House of Design.

[3] - Broad apparently used these sorts of ships to transport their hospital modules to South Korea).

[4] - I suspect they’re staffing up and down based on current workload, so it’s hard to ballpark a production number based on the number of workers.

[5] - They used to do single family homes, but withdrew from that market - presumably it was too logistically difficult given the shipping constraints.

[6] - The other most common model is to use modules to build in locations where extremely cold winters makes construction only feasible a few months of the year, taking advantage of modular’s ability to cut build times by 40% or more.

[7] - Though it is pretty common for manufacturing to be located somewhat far from major urban areas, where labor is presumably somewhat cheaper. But it’s far from a rule.

[8] - Trade unions have a long history of fighting against prefabricated construction.